ST. GEORGE — A McDonald’s fast food restaurant in Mesquite was shut down by health inspectors last week after receiving 27 demerits.

Officials with the Southern Nevada Health District shut down the Mesquite McDonald’s restaurant located at 190 E. Pioneer Blvd., a representative of the health district confirmed Thursday, adding that the restaurant was reopened later the same day.

During a routine health inspection Oct. 19, inspectors found staff not properly washing their hands, food not cooked or reheated to proper temperatures, potentially hazardous foods held at the wrong temperature and food unprotected from potential contamination, among other violations, according to the environmental health inspection report.

Inspectors initially visited the restaurant Sept. 21 and issued nine demerits. Upon returning to the restaurant Thursday, inspectors found several risk factors for foodborne illness, according to the inspection report.

The restaurant received five demerits under hand-washing as required; when required, proper glove use; no barehand contact of ready-to-eat foods, the report states.

Risk factors of concern: poor personal hygiene, including improper hand-washing and/or barehand contact with ready-to-eat foods, as well as food service employees working while sick with symptoms, such as vomiting, diarrhea, sore throat with fever, jaundice or infected cuts or burns on hands and wrists, the health district states on its website.

Proper reheating of potentially hazardous foods for hot holding kills vegetative bacteria that may have grown during the cooling process, the health district said on its website, adding:

Cooking temperatures are based on the temperatures required to reduce bacteria to a safe level in the foods we eat. Different raw, potentially hazardous foods have different levels and types of bacteria living in them and must be cooked to different temperatures. If you fail to reach these temperatures for the time required, some of the bacteria may survive and make your customers ill.

The restaurant further received five demerits under keeping potentially hazardous foods at proper temperatures during storage, display, service, transport and holding, according to the inspection report.

Risk factors of concern: improper holding, time and temperature of potentially hazardous food as bacteria grow best between 41 degrees and 135 degrees. Having food in this temperature range for unknown time frames allows bacteria to reproduce, which can make customers ill, the health district said.

Three demerits were issued for food not being protected from potential contamination during storage and preparation.

The restaurant was issued three demerits regarding having hand-washing facilities adequate in number, stocked, accessible and limited to hand-washing only.

“For food handlers to properly wash hands, hand sinks must be maintained accessible and used exclusively for hand-washing,” the health district states, adding: “Sinks must be properly stocked with dispenser-held soap, towels and warm water under pressure.”

Three demerits were issued relating to having hot and cold holding equipment that is properly designed, maintained and operated.

The health district conducts unannounced inspections at least once a year. The fast food restaurant had received mostly A grades on previous environmental health inspection reports.

A manager of the fast food restaurant declined to comment Tuesday regarding the restaurant closure and violations. 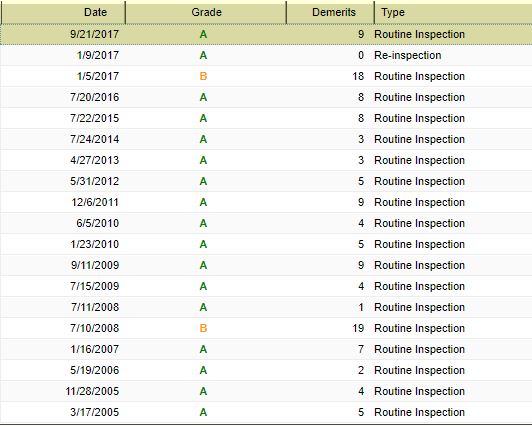 Couple scams fast food workers into handing over till money. Can you help police?