HURRICANE  — A mural drawn in chalk by a Hurricane couple recently garnered national attention when it was shared widely on social media and a national sports magazine’s website.

Rod Peterson teamed with his wife Justine to create the basketball-themed piece on a Provo parking lot over a three-day period during last month’s “Chalk the Block” festival, which attracted hundreds of street-art fans. As featured artists at the festival, the Petersons were commissioned to create the piece, which stretched nearly 30 feet across the pavement.

The mural, which used a reverse-perspective technique to give it the illusion of being three-dimensional, shows Utah Jazz center Rudy Gobert about to dunk a basketball over Kristaps Porzingis of the New York Knicks. The mural depicts the action as if it were taking place on an underground court beneath the broken asphalt, with Gobert’s left arm seemingly holding the ball high overhead.

“It rained for the majority of the first two days of the event and quite a bit the third day,” he said. “People covered their pieces with plastic and pop-up tents during the intermittent rains. Then, it was a mad rush to paint whenever there was a break in the weather.”

On the festival’s final day, hundreds of onlookers took photos of the finished product. A photo of Peterson using chalk to fill in the color around Gobert’s jersey shows Gobert’s head to be close to actual life-size. However, his outstretched arm is several feet long, and the ball, which appears round from the intended vantage point, is actually an elongated oval nearly 9 feet long.

Another photo shows a young boy appearing to stand on top of the ball, giving a sense of the artwork’s scale and dimensions.

Peterson said the large amount of favorable attention generated by the piece served as a reminder for his students to create artwork that audiences will appreciate.

Peterson, the art director at Diamond Ranch Academy in Hurricane for the past eight-plus years, said he and his wife enjoy attending street-art festivals and other art shows with Diamond Ranch art students. They typically participate in several such events each year, including chalk-art festivals in the Kayenta community in Ivins and in their home town of Hurricane.

“I love chalk-art festivals for myself because people get to experience the process of my work with me,” he said. “I love it for my students at Diamond Ranch because they get feedback quickly and often, which is a great learning experience for them.”

“Doing chalk-art festivals serves a dual purpose for me,” Peterson added. “My students are inspired to work and learn when they see what I’m doing. The crowds of viewers also inspire them to continue doing art themselves, because of the positive feedback they often receive. Then, of course, those same things apply for me. I like for people to have the chance to experience my work.”

Peterson’s own classroom has a mural painted onto the floor that uses a similar perspective technique. As one enters the room from the main doorway, the stylized letters “DRA ART” appear to protrude from the floor. From a vantage point other than the doorway, the orange and blue letters aren’t readable and appear to be a jumble of abstract shapes.

During a recent visit to Diamond Ranch Academy by St. George News, Peterson and three of his top art students, Molly, Ellie and Alex, led the reporter on a tour to show off several of the stunning murals and other works of student-created art that adorn the walls and hallways of the school. (Ed. note: In keeping with Diamond Ranch Academy policy, students are identified by their first names only.)

Approximately 130 at-risk students between the ages of 12-18 live at Diamond Ranch Academy’s 55-acre complex, according to school officials. As a fully licensed treatment center and boarding school, the academy aims to provide meaningful extracurricular activities and experiences beyond students’ traditional classroom education, thereby helping them transition into adulthood.

“Many students begin their journey at Diamond Ranch Academy with little in the way of confidence and direction, but they leave with new skills and renewed self-esteem,” Peterson said.

There’s no shortage of eye-popping examples of artwork throughout the school building. The gymnasium features a painting of a large diamondback rattlesnake appearing to burst through the wall as large letters proclaim, “Welcome to the Snake Pit.”

The walls of the cafeteria have been painted to resemble the cracked plaster of an Italian bistro overlooking the city of Venice.

Along the hallways, large and colorful portraits are accompanied by various inspirational and thought-provoking messages, including, “Truce is better than friction.”

Molly said that although she had not drawn with chalk before enrolling at Diamond Ranch, “It’s probably the medium that I’m the best at.”

She is working on painting a mural for a school therapist’s office wall, Molly said, which will depict a ballet dancer with the inscription, “How long are you going to remain a caterpillar?”

Diamond Ranch Academy admissions director Dan Borchardt had high praise for Peterson and his contributions to the school and its students.

Borchardt noted that many of the school’s trophy cases, planters and other items made of wood were designed and built by students in its carpentry classes.

“These kids have so much talent, it’s unbelievable,” he said.

Peterson said he hopes his students will continue to develop and showcase their artistic talents, even as he and his wife strive to do the same.

Over the past several years, many Diamond Ranch art students have won top awards in many shows, competitions and festivals throughout the state, with some even placing in national-level competitions, Peterson said, adding that several of his former students have gone on to pursue college-level education and careers in art and related fields. 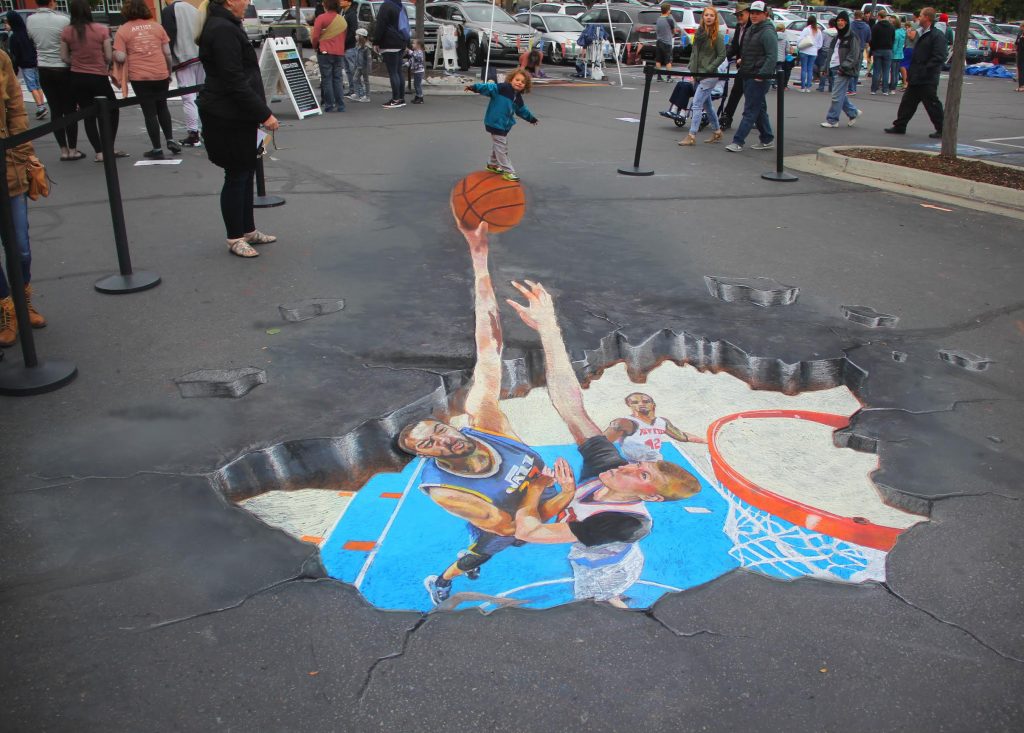 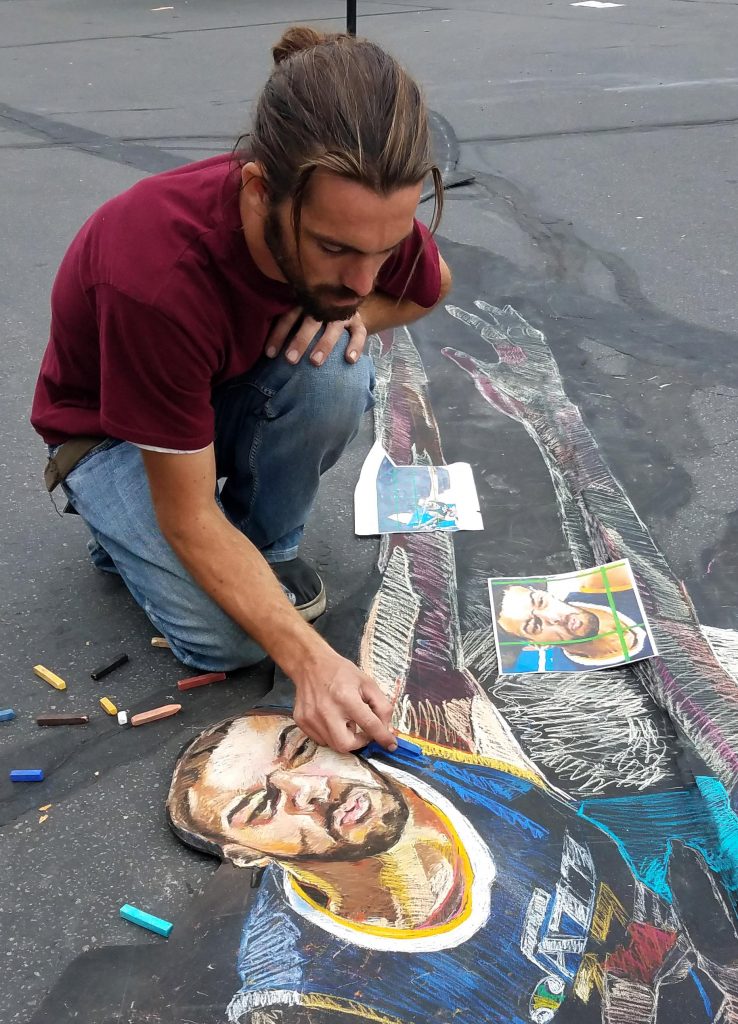 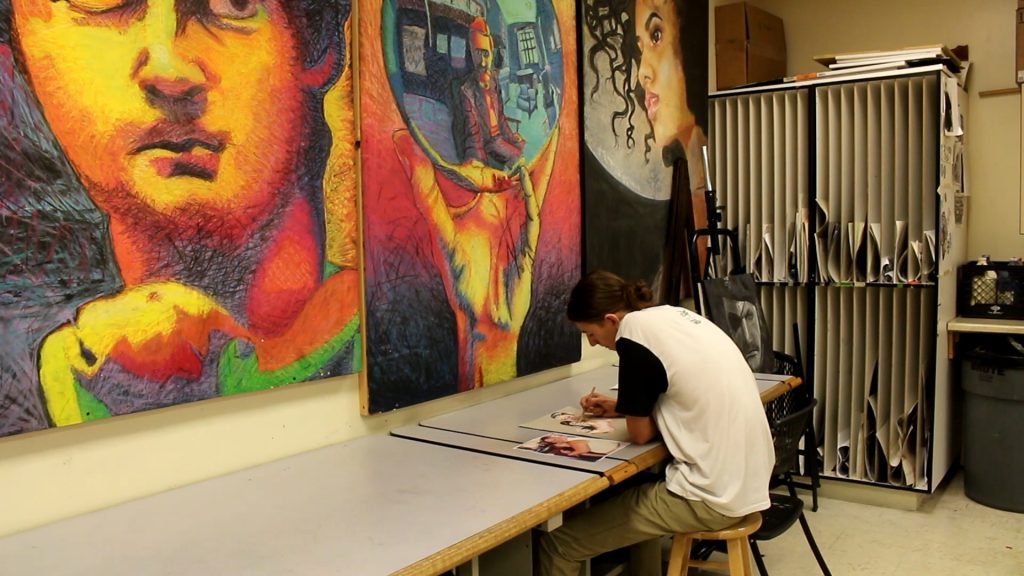 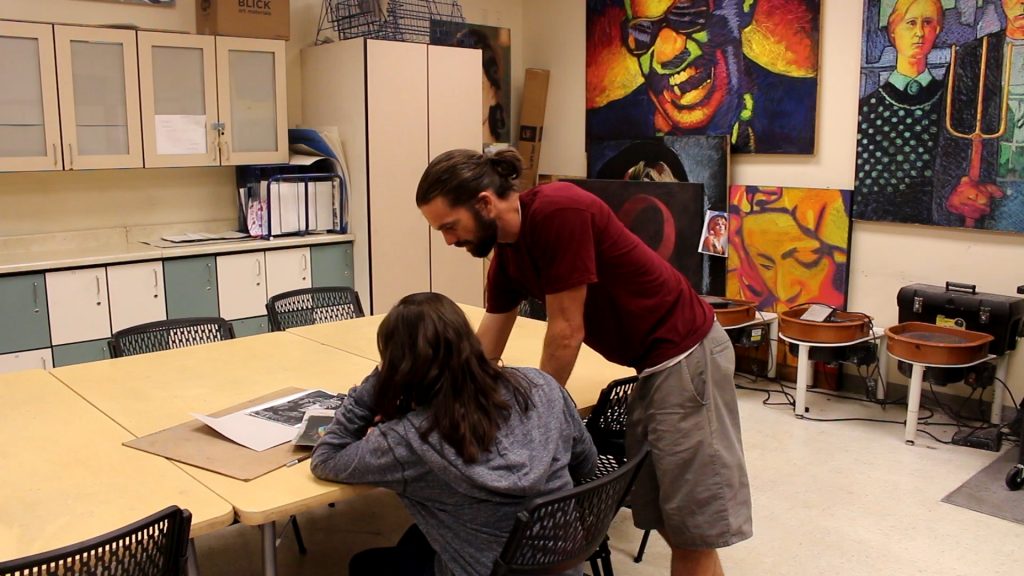 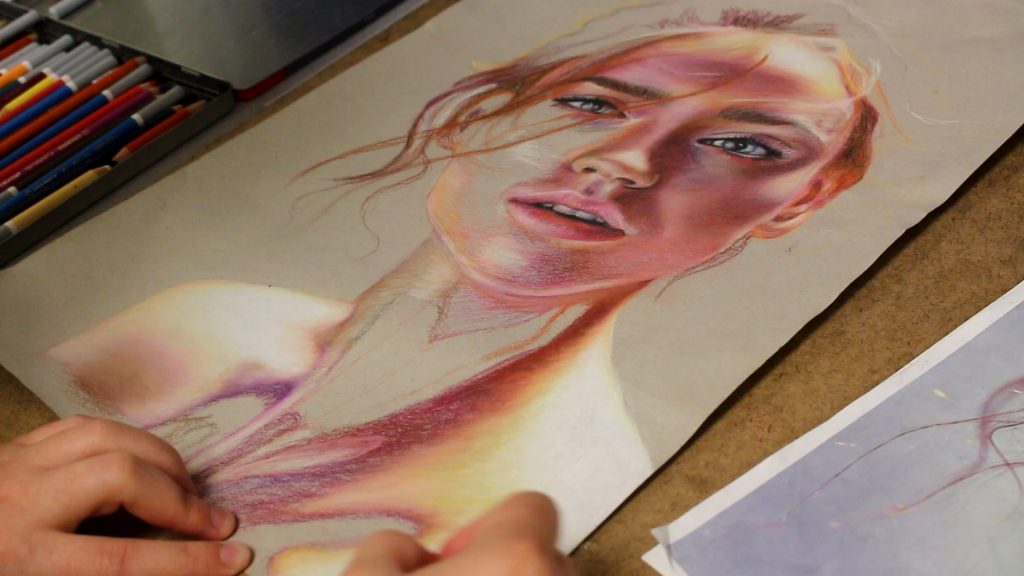 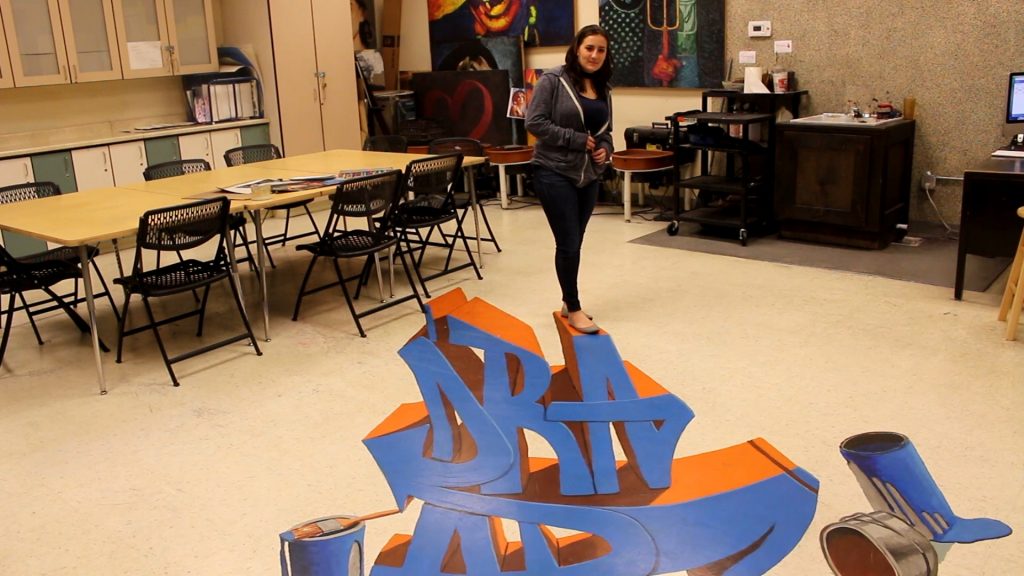 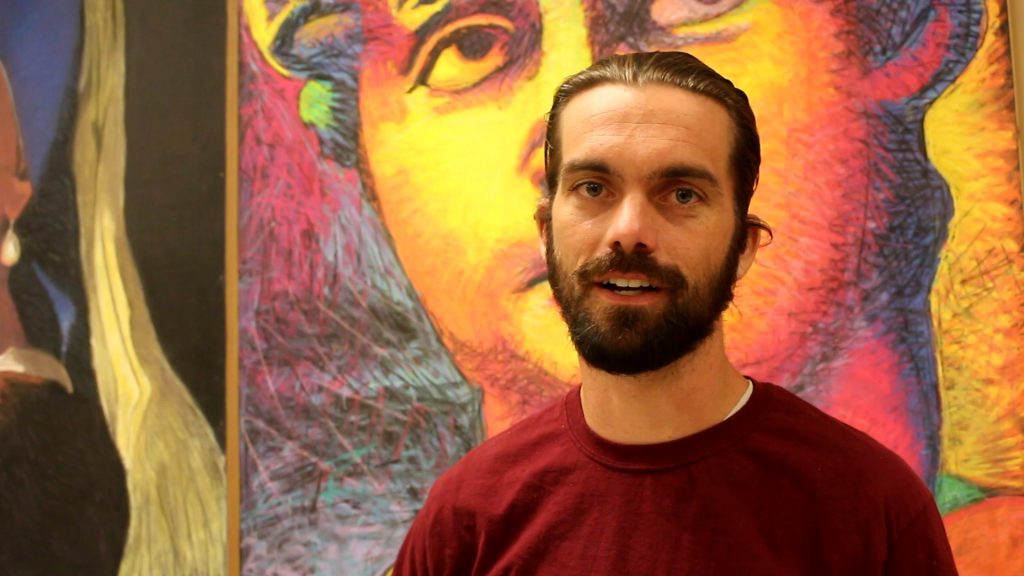 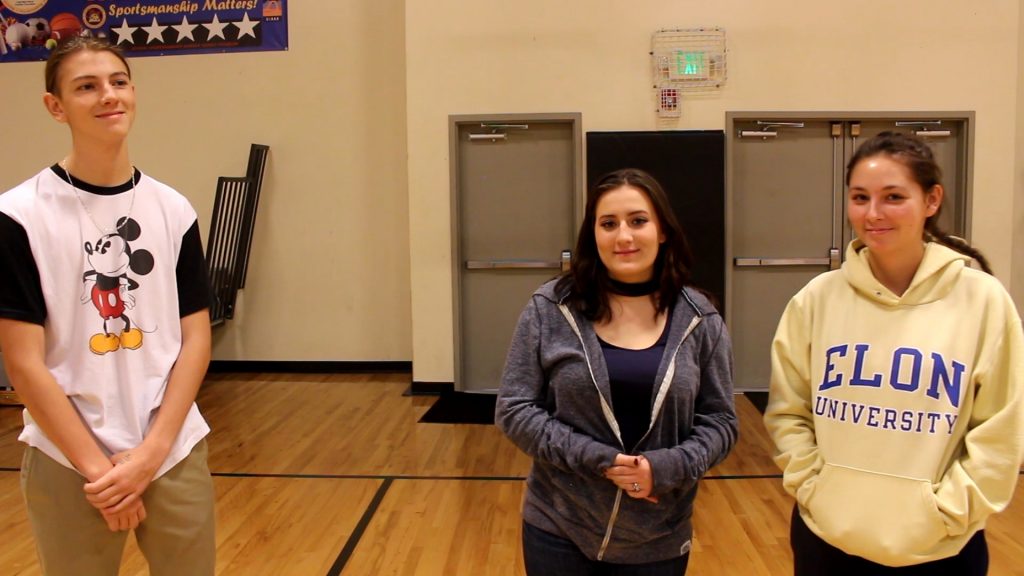 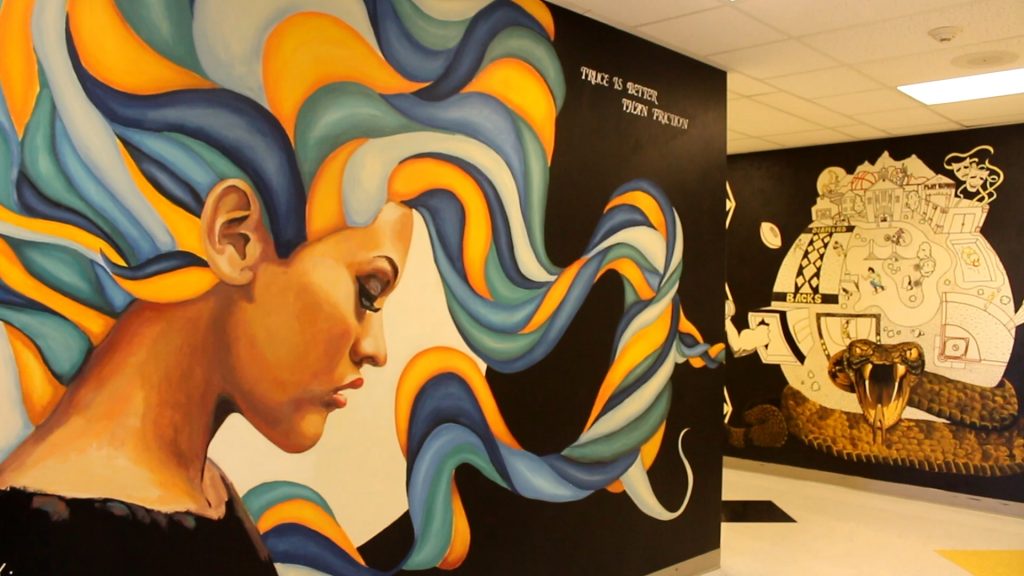 One of the many stylized murals adorning the hallways of Diamond Ranch Academy, Hurricane, Utah, Oct. 12, 2017 | Photo by Jeff Richards, St. George News 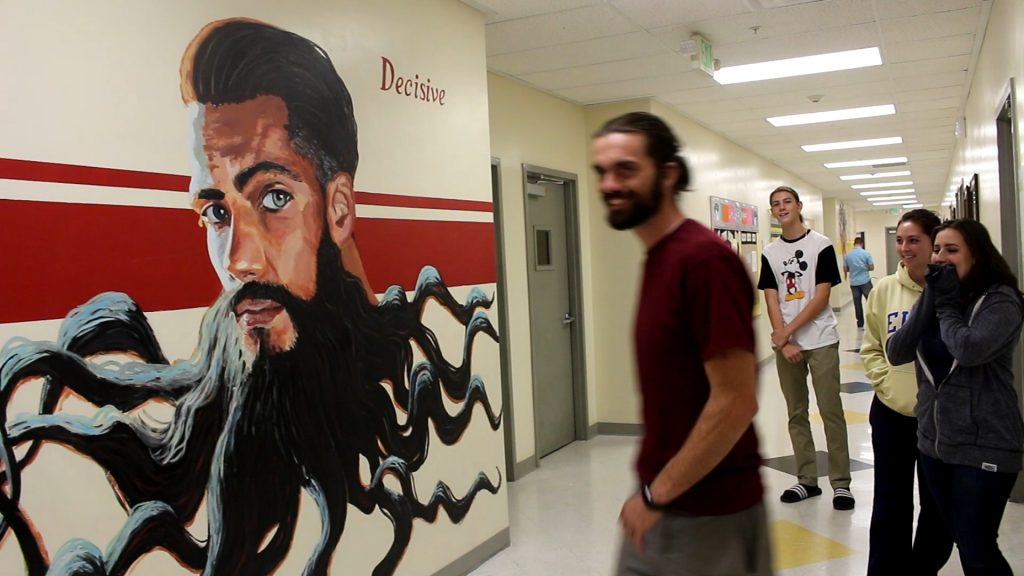 Diamond Ranch Academy art instructor Rod Peterson and three of his top art students walk past one of the many murals painted along the hallways of the school, Hurricane, Utah, Oct. 12, 2017 | Photo by Jeff Richards, St. George News 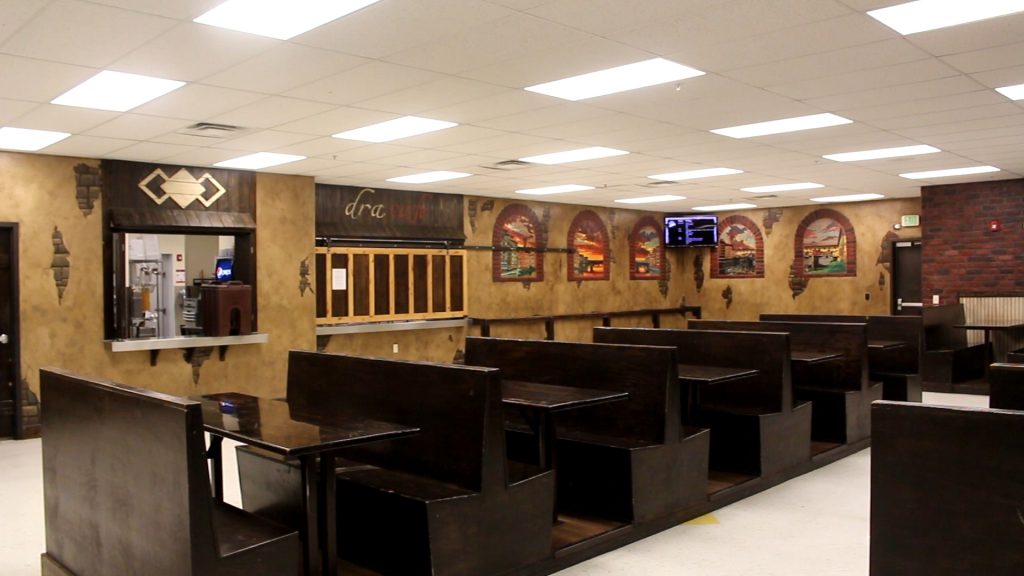 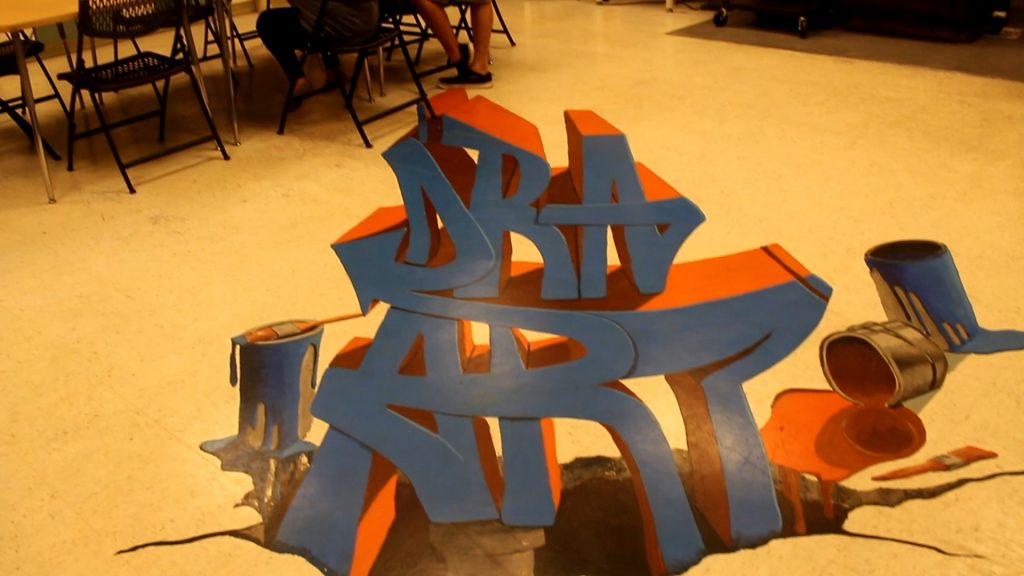 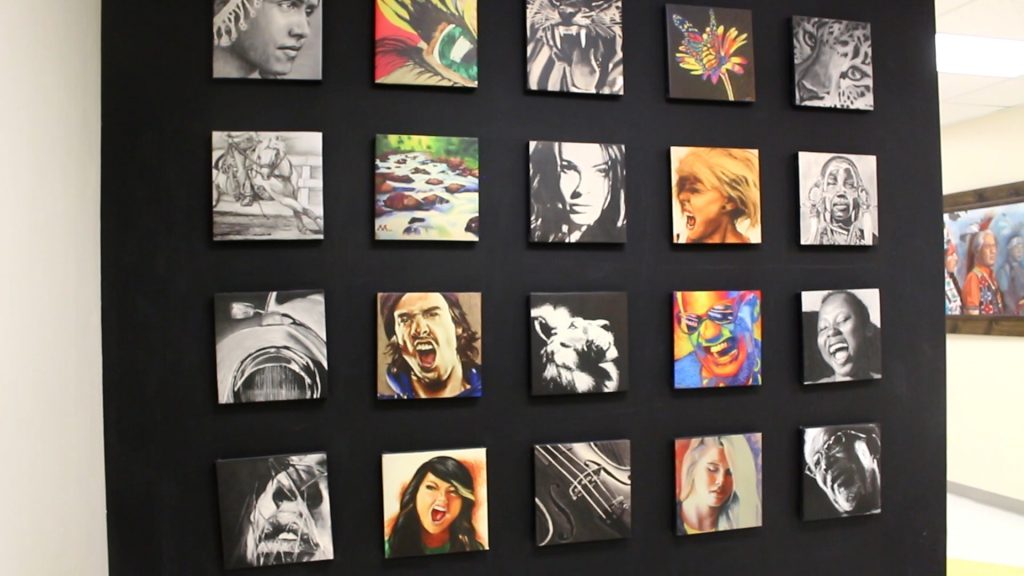 Some of the many portraits drawn by Diamond Ranch Academy art students which hang in the school's hallways, Hurricane, Utah, Oct. 12, 2017 | Photo by Jeff Richards, St. George News 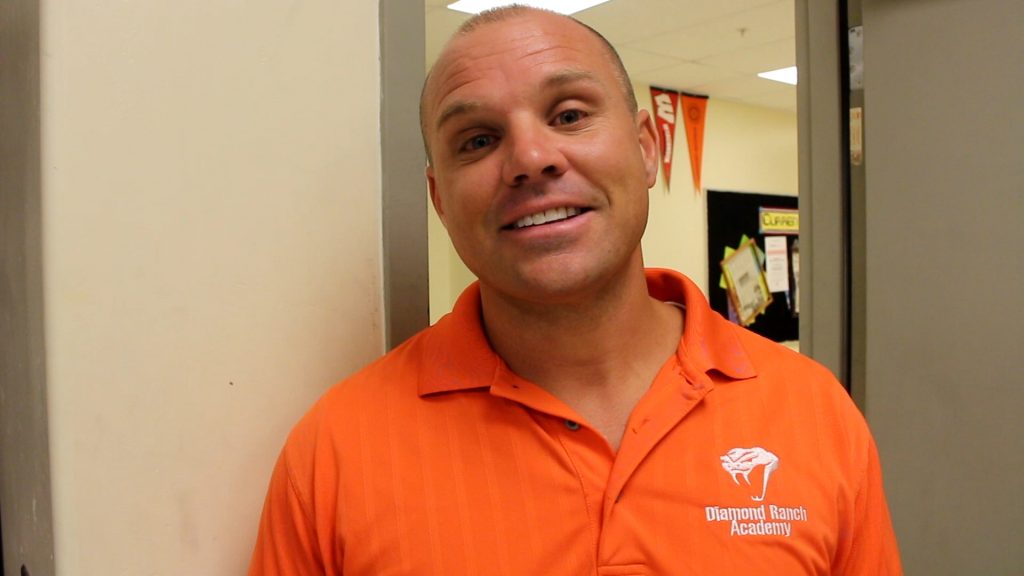 Diamond Ranch Academy: For many, a true jewel in the desert