WASHINGTON COUNTY — Both sides of the interstate were littered with crashes and rollovers as motorists navigated through heavy rain and hail scattered throughout the I-15 corridor Thursday.

The third crash, reported about 45 minutes later on the northbound side at mile post 33, involved a black Jeep SUV and a semitractor-trailer. No injuries were reported and the Jeep was towed from the scene.

The fourth crash was reported at 1:13 p.m. on southbound side at mile marker 22. It involved a white Toyota Highlander and a Subaru Outback, Utah Highway Patrol Trooper Seth Spencer said.

As emergency personnel arrived, they found the overturned Toyota in the median, smashed into the cable barrier with the Subaru stopped nearby.

The Toyota driver, a 43-year-old woman from Colorado, and her five passengers were transported to Dixie Regional Medical Center with “fairly minor injuries,” Spencer said.

Through witness statements, officers determined that the Toyota was heading south when the driver lost control of the vehicle as it veered to the left toward the median.

The SUV began to roll as it left the roadway and crashed into the cable barrier, sending debris flying forward into the northbound lanes. It came to rest upside-down smashed into the barrier.

Meanwhile, the Subaru was heading north and was struck by the flying debris, causing minor damage but leaving the driver uninjured.

“The man in the Subaru said that the Highlander would have been in his lap if that cable barrier wasn’t there, so it made all of the difference in this case,” Spencer said.

The Highlander sustained extensive damage and was towed from the scene.

“No citations have been issued at this point,” Spencer said.

Within 15 minutes another rollover was reported near mile marker 35 on the southbound side of the interstate while emergency personnel were still tending to the northbound rollover.

“One ambulance was diverted to the other crash at 35 but was called back to the scene since there were so many transported from the Toyota,” Spencer said.

Responders at the mile marker 35 crash found a gold Honda four-door passenger car overturned to the right of the roadway on the shoulder, Utah Highway Patrol Trooper Mike Murphy said.

The three occupants of the vehicle reported no injuries and declined transport to the hospital, he said.

The Honda was heading south and began to slide sideways to the right, according to a statement made at the scene. The vehicle hit the soft shoulder, overturned and came to rest.

“One of the witnesses said the hail was coming down pretty heavily when they saw the vehicle start to slide sideways,” Murphy said.

Meanwhile, several family members were traveling a short distance behind the Honda and pulled over when they came upon the crash. They told the trooper they were too far behind the Honda to witness the accident as it happened, but stopped when they recognized the car.

“The family was heading to St. George in two vehicles to do some canyoneering today and tomorrow when this happened,” Murphy said.

The three occupants in the Honda were checked by EMTs and reported they were uninjured in the crash, and declined transport to the hospital.

“That ambulance returned to mile marker 22 once they cleared from here,” Murphy said.

The Honda sustained extensive damage and was later towed from the scene.

As the trooper waited for the Honda to be towed, a sixth crash was reported shortly after 3 p.m. at mile marker 36 on southbound I-15 that involved a Jeep and a pickup truck pulling a travel trailer.

The southbound Jeep came up behind the pickup and struck the rear bumper of the camper trailer, sending the Jeep spinning off of the roadway. The driver of the truck was able to pull the trailer safely to the left and off the roadway.

The camper trailer sustained minimal damage and was driven from the scene, but the Jeep was rendered inoperable and towed from the roadway.

Both troopers cautioned drivers to use extra care when driving in the rain, and said speed plays a big part in many of the crashes, particularly when the roads are wet with rain and hail.

“This is all due to weather conditions and people driving too fast,” Murphy said, “and they’ve got to slow down.” 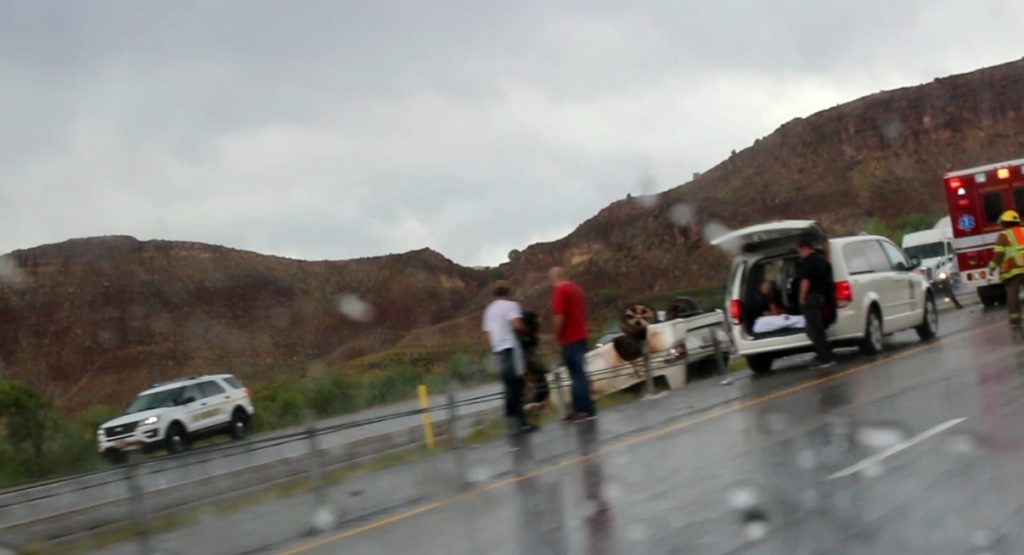 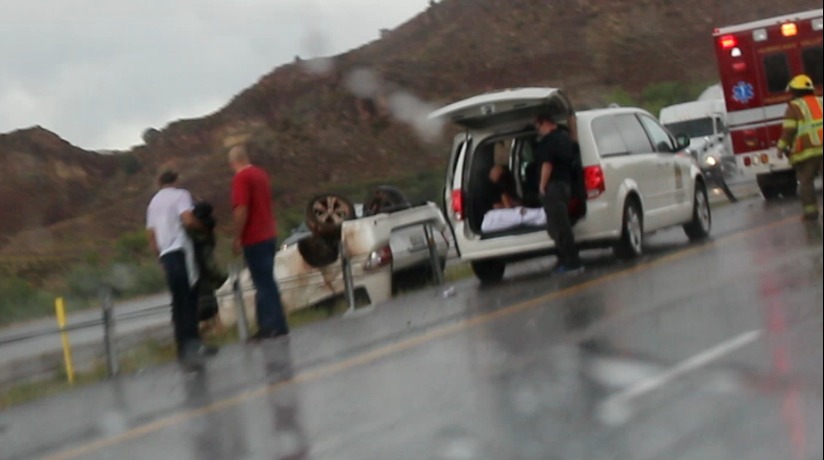 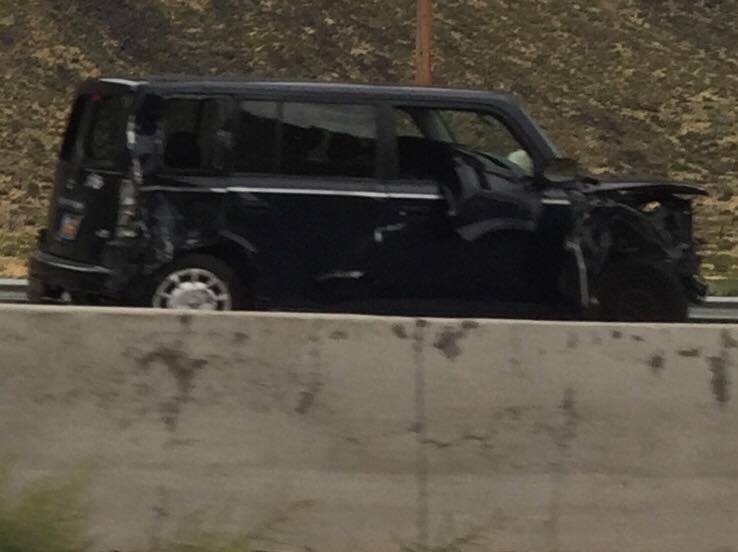 Black passenger vehicle on the southbound side of I-15 near mile marker 31 is damaged during crash in heavy rain Thursday, Washington County, Utah, Sept. 14, 2017 | Photo by Ron Chaffin, St. George News 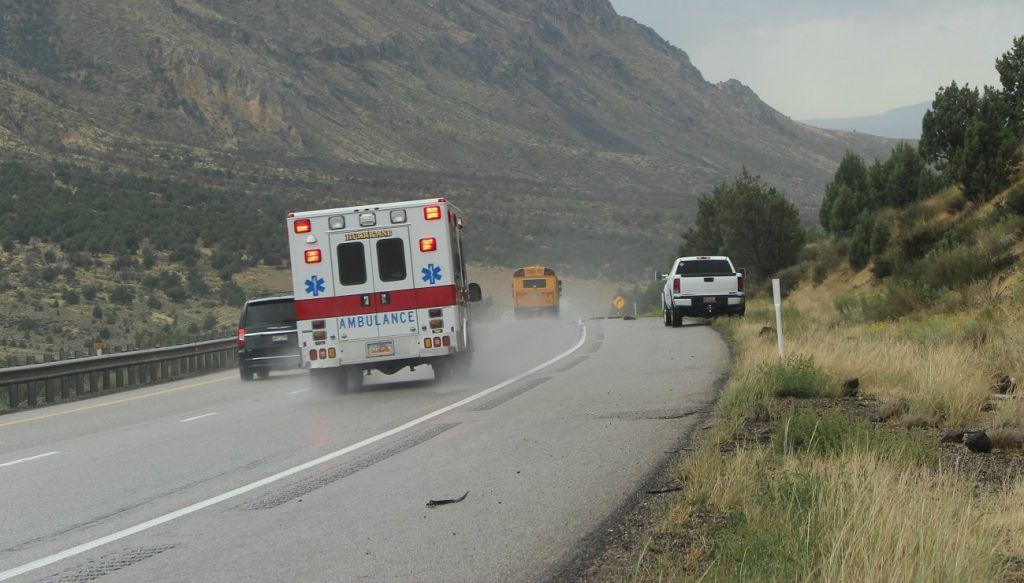 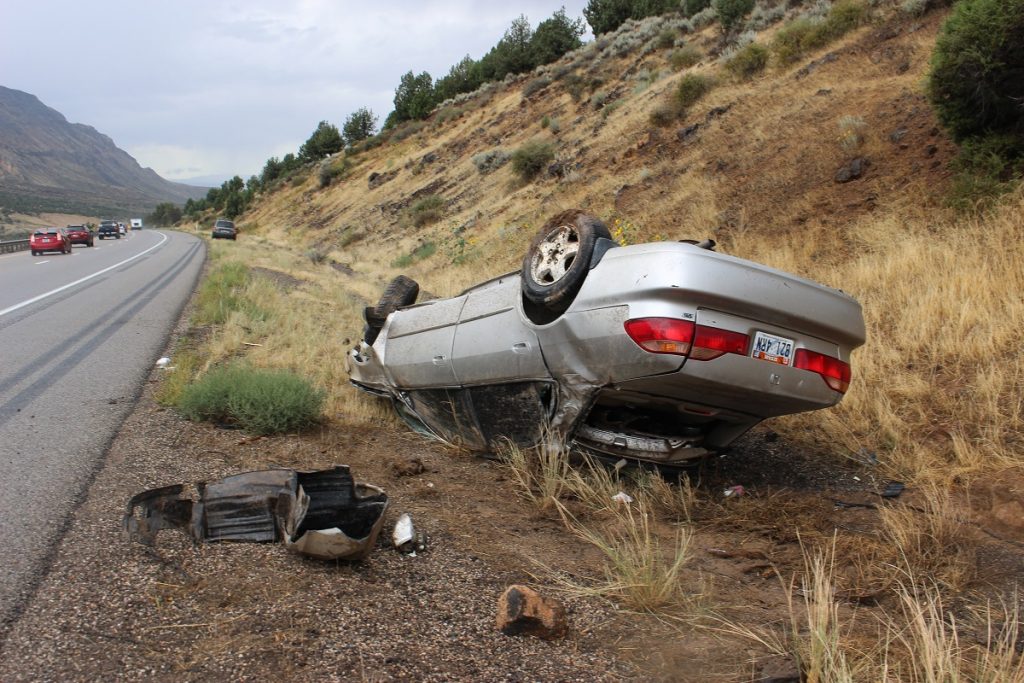 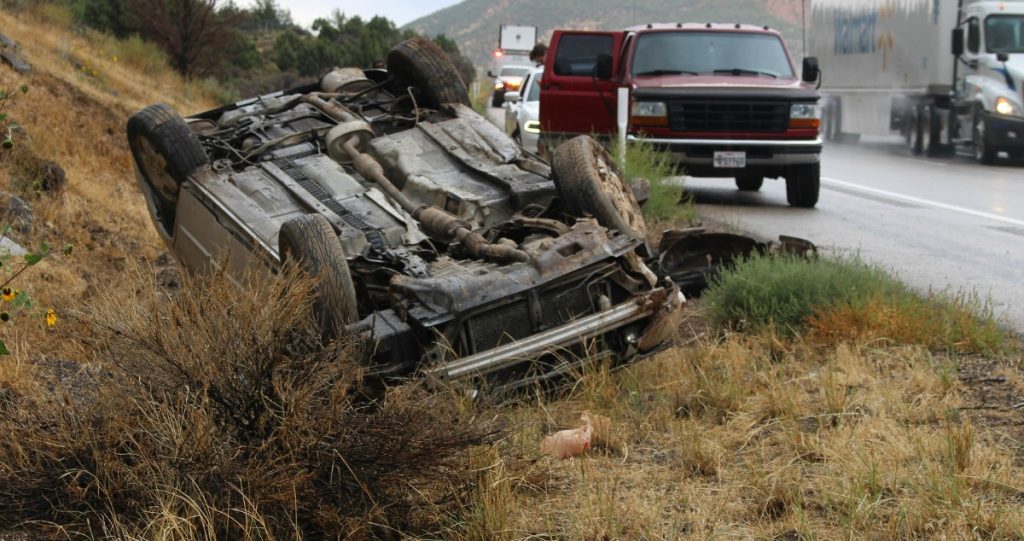 Crashes, deer and DUIs keep responders busy into the night

Although toned down this year, St. George still throws it down for July 4th