So what qualifies as a lot of points in football?

Back in the day (as us old-timers like to say), if a team scored 35 or 40 in a game, that was a huge output. The spread offense hadn’t been invented yet and coaches were known for getting a two score lead and then grinding out the yards (and the clock). Scores like 17-3 and 20-6 were commonplace.

But nowadays, well, scoreboard operators are being challenged. 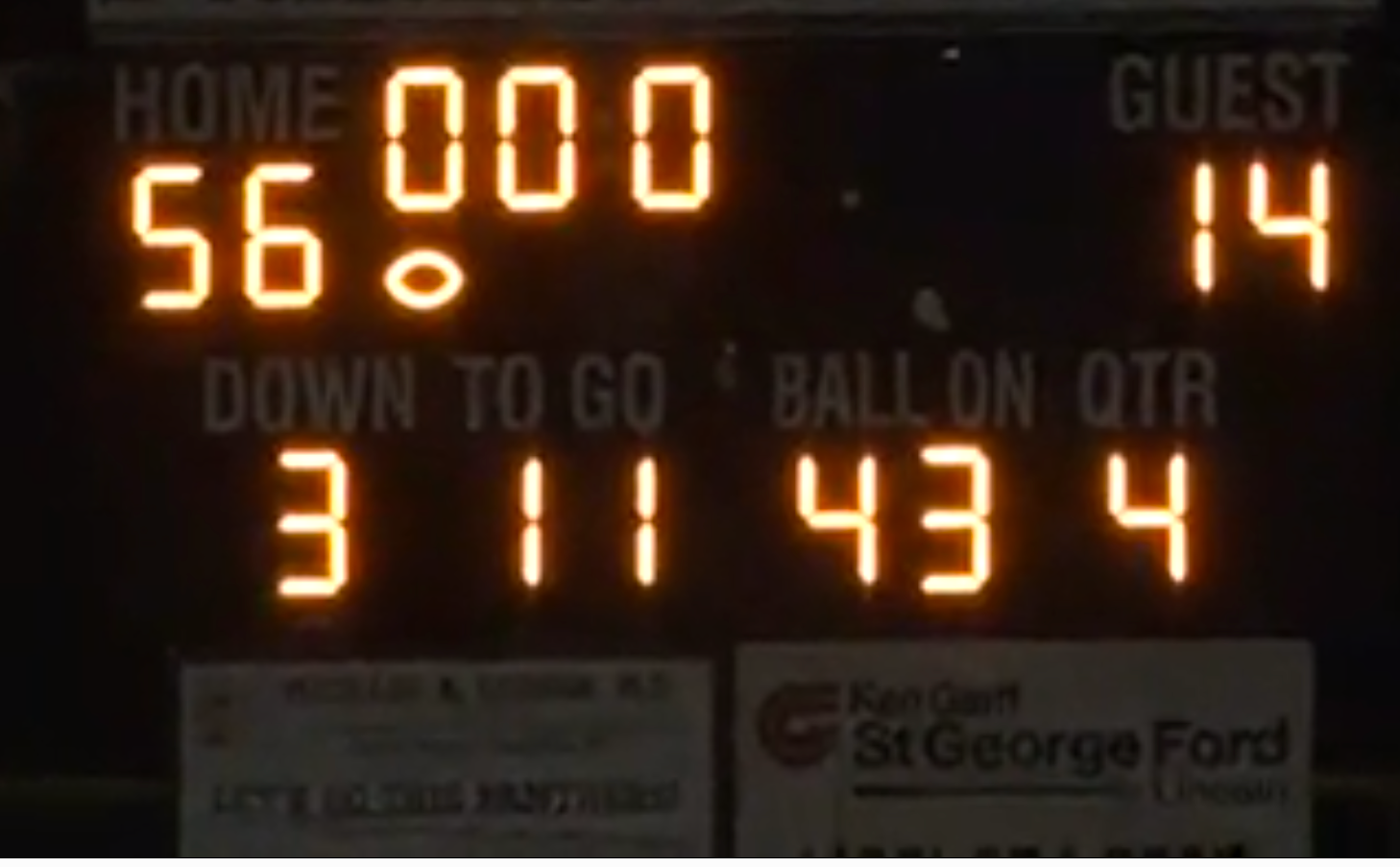 That means the winners are racking up points, but the teams that drop games are still scoring almost 20 points per contest. Maybe it’s a philosophy thing (“Don’t stop them, outscore them!”) or maybe it’s just that much more difficult to stop modern spread offenses and modern elite athletes.

But rest assured, the offenses of today are way ahead of the defenses. Perhaps the famous SportsCenter phrase, “You can’t stop him, you can only hope to contain him,” is the best way to describe it.

In 1986, I remember watching a football team in Pennsylvania practicing a bizarre offense in which they never huddled and they had four or five wide receivers on every play. I remember thinking the gimmicky offense would never work against big, physical teams with fast linebackers. Little did I know …

Which brings us to the Big Picture in Week 3 (and links to all the games!). With important Region 9 games starting next week, this final week of the preseason (for everyone except Pine View) was for tweaking the little things and perhaps resting some stars. And of course, scoring loads of points.

For Pine View, most of the starters got to rest the entire second half against Manti. But that was more a product of a nasty flu that swept through the team last week. However, it was Manti that looked a little green around the gills as the Panthers could do no wrong in the first half of their blowout win.

Snow Canyon also won at home, finally exorcising the Las Vegas High demon (SC was 0-5 previously against the Wildcats). The truth is, no one is quite sure what to expect from the Warriors as region play commences. They’re good, no doubt. Are they good enough to compete (and win) against the region’s big three? We shall soon see.

The highest scoring team in the region (and perhaps the state) calls Walt Brooks Stadium home. Of course, Dixie was far from Brooks Stadium this weekend. But no matter as the defending region champs busted out the whooping sticks to the tune of 10 touchdowns at Tooele Friday night.

Cedar has staked its reputation on defense this season, but that didn’t help in low-scoring losses in Weeks 1 and 2. But the D did the deed in Week 3 as the Redmen took the lead with eight minutes left against North Sanpete and held on from there to get their first win.

Hurricane was home once again, and found itself moving up and down the field once again. But for the second week in a row, the Tigers big yardage did not translate into a winning amount of points. This time, Moapa Valley’s passing game was too much for the Tigers.

Canyon View seems to be getting better and better under first-year coach Skyler Miller. Unfortunately for the Falcons, it hasn’t quite translated into wins. CV went from a blowout loss in Week 1, to a close-ish game last week to an overtime loss this week at the hands of 5A Timpanogos.

And Desert Hills, man, the Thunder just ran into a proverbial buzzsaw. Facing one of the nation’s elite quarterbacks in Jack Tuttle (a University of Utah signee), plus a bevy of super-speedy wide receivers and running backs, well, the Thunder just couldn’t keep up.

Here’s a look at how the preseason has turned out for Region 9 teams:

Police: Suspect steals deputy's vehicle, leads officers on chase before crashing off I-15 in Southern Utah