ST. GEORGE — Police and family members are searching for a St. George man who went missing early Saturday morning and is believed by authorities to possibly be endangered. 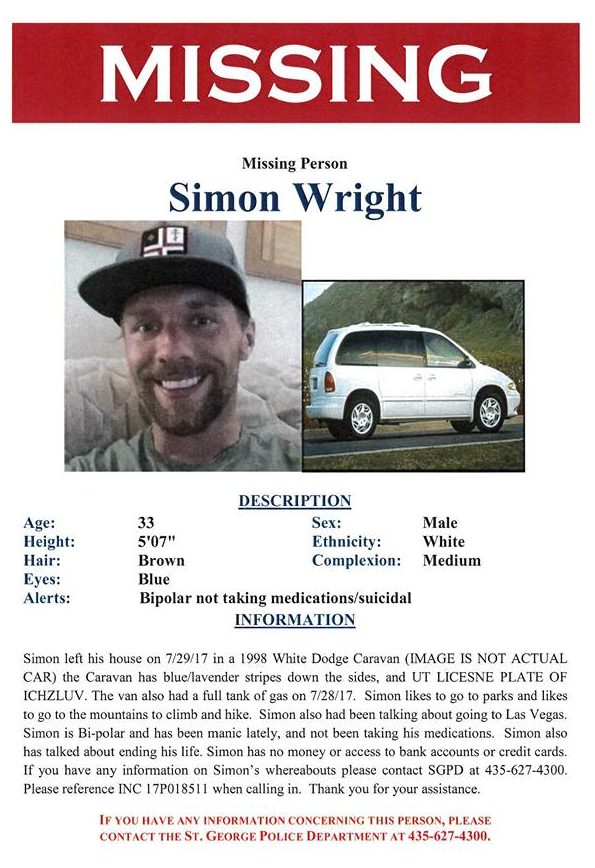 Wright left his mother’s home in the SunRiver St. George community at 5 a.m. Saturday and said he was going to the gas station and then going to a local park, family friend Kortney Wilcock said.

Wright was driving a white 1998 Dodge Caravan – Utah license plate ICHZLUV – with blue/lavender stripes painted down the sides, according to a statement issued Wednesday by the St. George Police Department.

Wright has not been seen or heard from since.

“Simon is bipolar and has been manic lately, and not been taking his medications,” St. George Police said. “Simon has also talked about ending his life.”

He left with a full tank of gas but has no money or access to bank accounts or credit cards, police said.

Wright likes going to parks and going to the mountains to climb and hike, police said. He had also been talking about going to Las Vegas.

He was last wearing a T-shirt, jeans and brown shoes.

Wilcock said she is hopeful someone sees an abandoned white Dodge Caravan and that it will help family and friends determine where to search for Wright.

“Simon does have a mood disorder and may not want to be found,” Wilcock said. “Please contact police and let them know you’ve located a missing person. Keep an eye on him until police arrive.”

Anyone with information regarding Wright’s whereabouts is asked to call the St. George Police Department at 435-627-4300 and reference Incident No. 17PO18511.