ST. GEORGE — If you’ve ever looked up to find those innocent-looking linear clouds of condensed water vapor left in the wake of passing aircraft and wondered why they appear noticeably thicker than decades ago, you’re not alone.

There are a growing number of individuals who believe that these wisps of vapor aren’t innocent at all, and those who subscribe to this line of thinking call them “chemtrails.”  Some believe that this phenomena is part of a secret global plot to change Earth’s weather in the hope that it will reverse the effects of climate change.

Others hold that these cloudlike formations are made up of chemicals or biological agents used to control the population, control the mind or to manipulate the weather in a way that impacts certain areas, such as withholding rain from another country.

As the theories go, various governments or other parties are engaged in a secret program to add toxic chemicals to the atmosphere from aircraft that leave visible plumes or trails in the sky, similar to contrails.

However, unlike contrails these formations are thicker, last longer and are often set in a crisscross pattern in the sky.

This theory gained popularity as more people started to notice the visible change from the white plume or trail that was left in the wake of a plane years ago to the thick trails seen today.

St. George News set out to to ask local residents and visitors their opinion on chemtrails and this “conspiracy theory.”

Watch the video top of this report.

Contrails, or condensation trails, are clouds that form when vapor condenses and freezes around small particles or aerosols that form the exhaust of aircraft and are always made of ice particles that can only form in attitudes above 26,000 feet where the air is very cold.

While contrails generally are made up of the same ingredients, the amount of time it takes for the trails to dissipate varies and is determined by the temperature and moisture in the air.

Some are short-lived and disappear within a couple of minutes or less because ice forms before returning to vapor quickly, while others are persistent due to excess moisture in the air that contributes to a larger plume, according to NASA on its “Contrail Science” webpage.

One thing is certain: There are more of these contrails today than in past years.

In 1974 airplanes carried 421 million people globally; some 40 years later this number has increased to more than 3.2 billion passengers, according to a report released in February 2016 by World Development Indicators.

Chemtrails, or chemical trails, are believed to be part of a geoengineering program that involves “solar engineering management,” which theoretically reduces some of the impacts of climate change by reflecting a small amount of sunlight back out into space.

It is believed that these plumes do not break down and dissipate as quickly but linger as they slowly fan out across the sky in the parallel and geometric patterns set by the aircraft releasing them.

Many believe this type of climate manipulation is being done on a global scale that involves the saturation of the atmosphere with “reflective light-scattering metallic particles,” leaving humanity with a dying planet, according to an article by Dane Wigington of Geoengineering Watch.

“Life on our planet is in free fall for many reasons, but mathematically speaking climate engineering is the greatest assault of all against life on Earth,” Wigington said.

This technology attempts to mimic the cooling effect of a large volcanic eruption by cooling the planet, but researchers say doing so could cause a catastrophic drought or other problems, according to an August 2016 article, “‘Chemtrails’ not real, say leading atmospheric science experts” published by Carnegie Science.

The primary components in chemtrails are believed to be aluminum, barium and strontium, all heavy metals that can be harmful to human health.

“While I’m aware of the chemtrail theory, I have to disagree because the trails left by aircraft are formed only at high altitudes as vapor from the aircraft’s exhaust freezes into ice crystals,” Kitchen told St. George News in April.

The theory is just that, Kitchen said, a theory without any evidence.

Chemtrail theorists argue one of the primary objectives of the program is to modify the weather – and weather manipulation is nothing new.

A Weather and Climate Modification Report of the Special Commission on Weather Modification, authorized by the National Science Board in 1963, delivered in 1965, reveals historical information referring to climate modification programs that, the report states, have been in operation since at least the 1940s.

“Over the past twenty years experiments have been conducted on weather modification,” the report states, “particularly on the effects of seeding clouds with such materials as silver iodide crystals.”

“The experiments were undeniably successful, indicating that, at least under weather and terrain conditions such as those involved, the U.S. Government has realized a capability of significant weather modification,” U.S. Deputy Under Secretary of State for Political Affairs Foy D. Kohler wrote in a 1967 Memorandum.

Kohler also wrote there would be less of an adverse impact if the operation was known, adding, “but we should anticipate that this line would not satisfy critics both national and international, and it is possible that the issue could be brought before the UN.”

Is it fact or fiction?

A 2016 study described in the Carnegie Science article entailed a survey taken of the world’s leading atmospheric scientists who categorically rejected the existence of a secret spraying program.

Survey results show that 76 of the 77 participating scientists said they had not encountered evidence of a secret spraying program, and agreed that any evidence cited could be explained by typical contrail formation or “poor data sampling.”

“We wanted to establish a scientific record on the topic of secret atmospheric spraying programs for the benefit of those in the public who haven’t made up their minds,” Steven Davis, of University of California, Irvine, said, according to the Carnegie Science article.

The Geoengineering Watch article states that an increasing number of individuals are convinced there is a global effort that involves spraying chemicals in the sky without the public’s knowledge or consent.

“There is a mountain of metals raining down on all of us,” the article states, “and we are all a part of a the grand and lethal experiment.”

Chuck Kenny of Hurricane began researching the subject several years ago when he noticed a difference in the thickness of the contrails. Later he observed an aircraft move across the sky heading west before it made a U-turn and came back around, leaving a thick white trail of “something” as it moved, he said.

Kenny began photographing the activity taking place. Several of those photos are included in the photo gallery below.

Rhode Island may be the first state to assess the development of environmental protection and public safety legislation intended to regulate geoengineering operations. In March, its legislator Justin Price introduced a bill that, if passed, would have required special licensing from the state to engage in geoengineering activities, a process that would have included environment impact review in a forum open to public comments. Since introduction, however, the original bill has been replaced with a substitute bill that would create a special commission to study and provide recommendations for such regulation and licensure of geoengineering technologies.

The year 2012 was the hottest on record in the U.S. and the 10th warmest year in the world, according to a 2016 Global Climate Report released by the National Oceanic Atmospheric Administration. And nine of the warmest years ever recorded have occurred in the last 17 years, according to that report.

To combat this warming trend researchers from the Harvard John A. Paulson School of Engineering and Applied Sciences have identified an aerosol that could be used for solar geoengineering to cool the planet.

Researchers also found that injecting light-reflecting sulfate aerosols into the stratosphere would cool the planet, but there is a risk of damaging the ozone layer. However, the team also said it has identified an aerosol that could repair the ozone layer at the same time, according to an article on the Harvard Gazette site.

The report also outlines what many believe is already taking place and has been for decades despite the fact that Keith wrote additional testing is needed before it could be implemented.

Millions around the globe appear to believe or support to some extent a chemtrail conspiracy theory. Truth can be elusive, but the phenomena if nothing else give one something to think about when eyes are turned skyward. 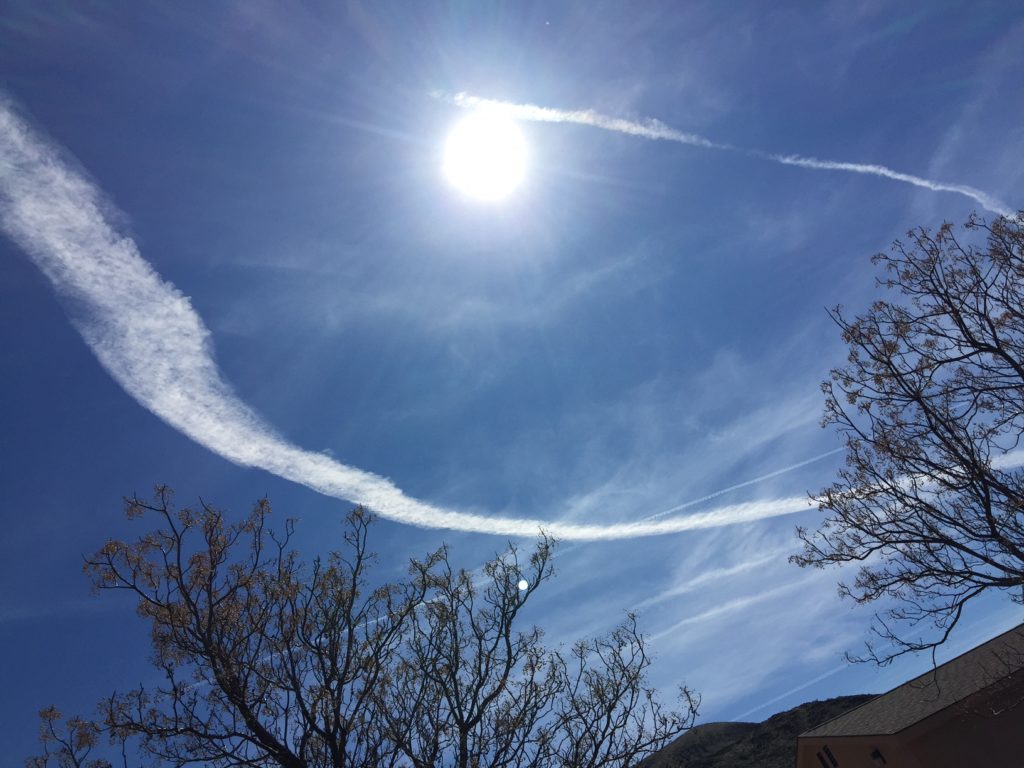 A photo of an airliner initially heading east before turning around and going over the same area in the opposite direction, Hurricane, Utah, 2017 | Photo courtesy of Chuck Kenny, St. George News 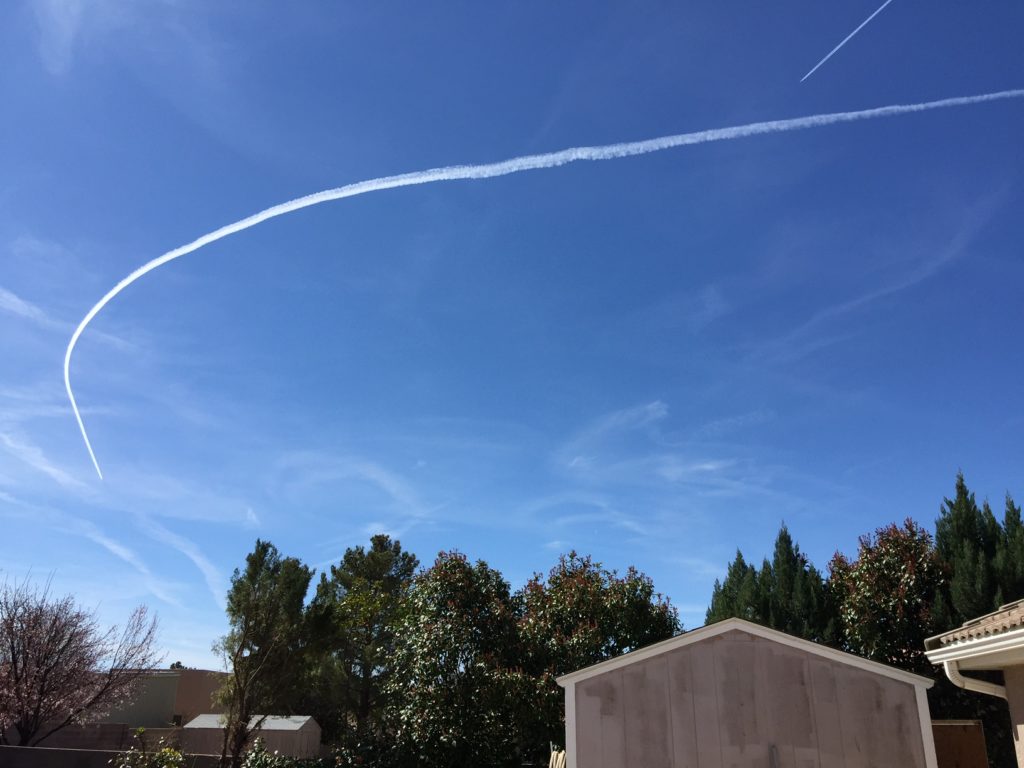 An airliner heading east leaving a trail of vapor as seen over Hurricane in 2017 by local resident, | Photo courtesy of Chuck Kenny, St. George News 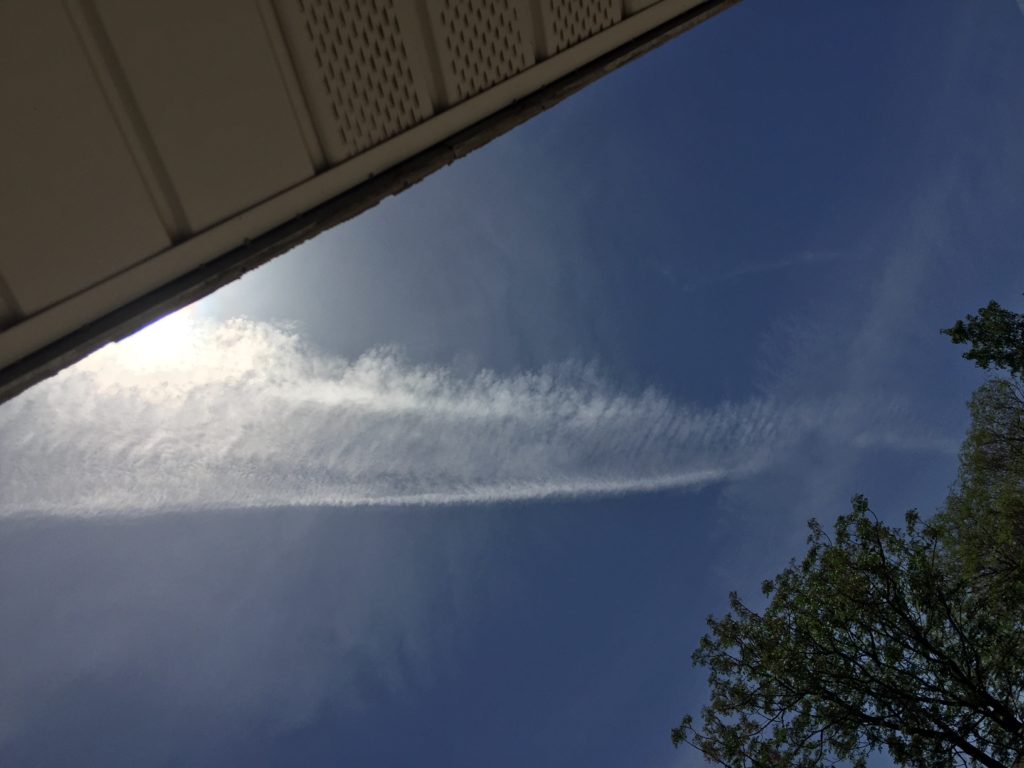 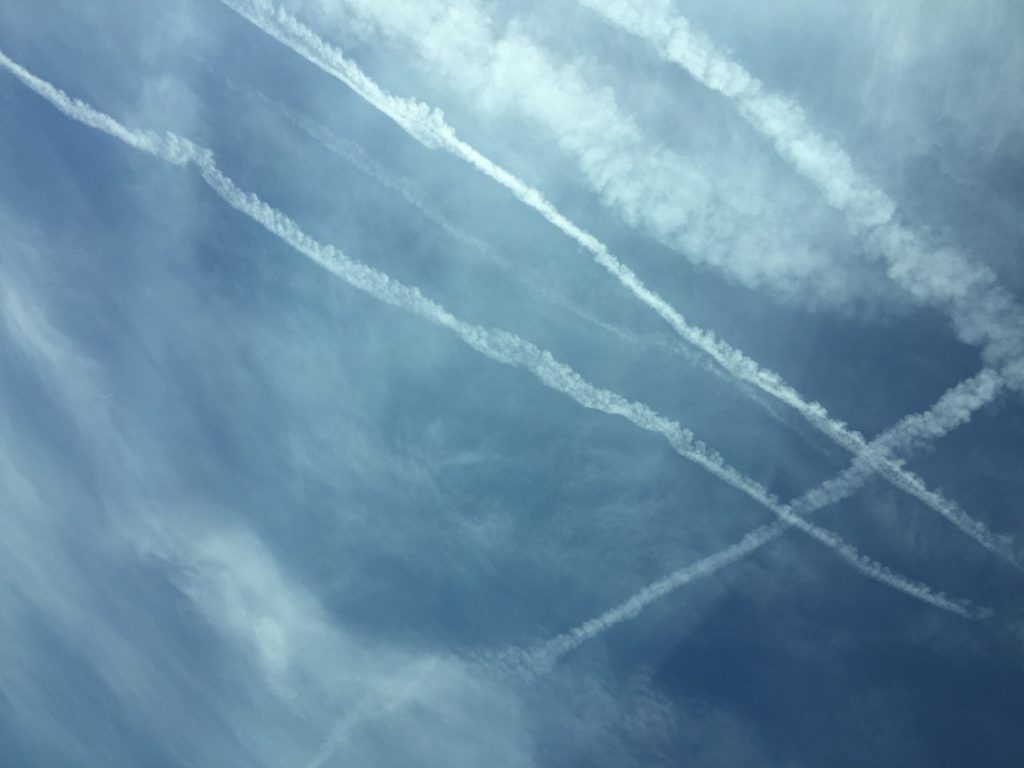 Crisscross pattern in the skies over Interstate 15 near Las Vegas in 2017 | Photo courtesy of Chuck Kenny, St. George News 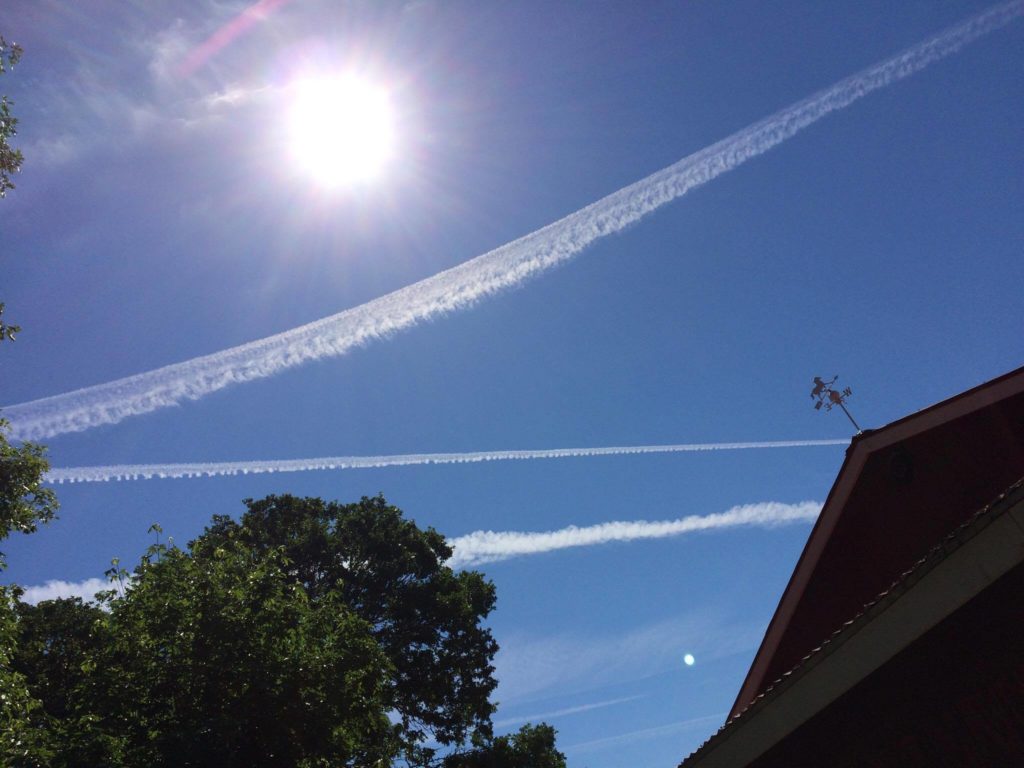 Photo from a reader in Oregon who claims the patterns over the sky are proof of chemtrails, Josephine County, Utah, May 2017 | Oregon resident, St. George News

On the EDge: We’ve lost our truth