ST. GEORGE – The 13th annual Ahern Rentals Utah State Long Drive Championship is this weekend and for the first time, Logan Leavitt won’t be trying to climb the mountain to the top. This year, he’ll be trying to stay there.

Leavitt, a St. George native who wowed the gallery with several drives just under 400 yards last year, is back to defend his long drive title. He paid his dues, finishing in third and second in 2014 and 2015 before finally taking home the trophy last year.

In what’s billed as “Utah’s ultimate golf event,” golfers from around the state gather at Coral Canyon Golf Course to try and hit the ball the farthest. The drive must land in play and is then measured by officials for distance. Leavitt won the men’s open division last year, stroking it 376 yards in the finals, 37 yards further than the next closest competitor. Leavitt’s longest drive in the competition was 395 yards.

“He’s been a top driver for us for years,” said event organizer Devin Dixon. “He’ll be tough to beat, but we expect some very good long drivers to challenge him. I think we’re going to have a great field this year. It’s going to be a lot of fun.”

For reference, the recognized Guinness Records is 515 yards set in 1974 by Mike Austin. No one has come close to that record. In long drive competitions throughout the world, the top drive was 506 yards by Nico Grobbelaar in 2012. Most PGA Tour golfers drive about 300 yards off the tee.

Last year, more than 220 golfers competed in the Ahern Rentals Utah State Long Drive Championships, facing off for trophies in 10 categories, including men’s pro open, men’s amateur open, women’s open, men’s senior (45+), super senior (50+), masters (60+), boys 17 and under, boys 14 and under, girls 17 and under and girls 14 and under.

Qualifying is Friday and early Saturday with finals in all categories Saturday at 5:30 p.m. at Coral Canyon’s Hole No. 1.

In addition to the long drive event, there are also several other golf skills competitions. The Van Gilder Homes Hole-In-One Shootout is a closest-to-the-pin contest with the top 16 qualifiers getting a chance Saturday at 5 p.m. to win a Van Gilder Home worth $250,000 if they can hit a hole-in-one.

Visit sportsradio977.com to download registration forms. Contact Devin Dixon at 435-467- 7571 with any questions, or email him at [email protected] Forms can also be obtained at sponsor locations.

Golf fans are encouraged to attend the free event, with bleachers set up at Coral Canyon Hole No. 1 for the big event. 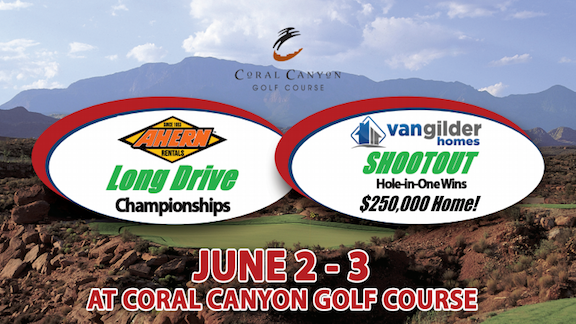 Grip it and rip it: Tuaone outpaces Leavitt to win Utah Long Drive