The cab of a green Wells semi-tractor trailer becomes wedged in the trailer of another semi during a crash on Interstate 15 Friday afternoon, Beaver County, Utah, May 12, 2017 | Photo courtesy of the Utah Highway Patrol, St. George News

ST. GEORGE — One man seriously injured in a three vehicle collision on Interstate 15 in Beaver County Friday was flown to a St. George hospital while his father, who was also injured in the crash, was transported by ambulance to a different facility.

Shortly after noon, a multivehicle crash was reported just south of Beaver on I-15 northbound near milepost 109 involving a pickup truck pulling a camp trailer and two semi-tractor trailer trucks, Utah Highway Patrol Sgt. Jacob Cox said. Traffic was already congested from another crash reported at mile marker 110 when the second crash occurred.

Upon arrival officers closed both northbound lanes of the interstate and diverted traffic onto state Route 160 through Beaver, Cox said. The closure was needed in order to clear debris on the roadway and provide an area for an Intermountain Life Flight helicopter that was en route to safely land.

A pickup truck pulling a camp trailer and a gray Pride semi were traveling in the right lane at either a reduced speed or were close to being stopped in traffic because of the first crash, according to a UHP news release.

The driver of a second semi, a green Well transport semi, did not slow for the congestion and drove into the back of the Pride semi at 65 mph, the release states. The impact pushed the cab of the Wells semi into the Pride semi.

Responding troopers found the driver of the Wells semi on the ground, but it was unknown if the man was ejected or climbed out of the truck after the crash. The driver told officers his adult son was still inside the cab of the truck that was now wedged into the trailer of the second semi.

Troopers were able to locate the driver’s trapped son but could only reach his arm, which he was able to move in response to their questions.

Beaver County Sheriff’s Deputy Lonnie Laws, who is also an EMT, climbed into the semi to render aid. The deputy held the man’s hand to comfort him while responders worked to extricate him from the wreckage.

Law stayed with the man until firefighters were able to free him from the wreckage. Due to his significant injuries he was flown to Dixie Regional Medical Center in St. George while the driver was transported to Beaver Valley Hospital by ambulance.

“We are still trying to determine how fast the Well semi was going when he struck the second semi, so the investigation into the crash is ongoing,” Cox said.

The trooper also explained that it is commonplace for officers to comfort crash victims while firefighters or EMS are still en route since many times they are the first to arrive at the scene.

“They are injured, and particularly when they are trapped they feel alone, and sometimes it takes a little time to extricate them so we stay with them,” Cox said.

Giving the victim comfort and telling them to focus on the trooper’s voice helps them to remain calm, which reduces the risk of them going into shock, which can be dangerous, he said.

Both northbound lanes were reopened for traffic at 3:30 p.m., while the on-ramp at 109 remained closed. No other information was available at the time of this report. 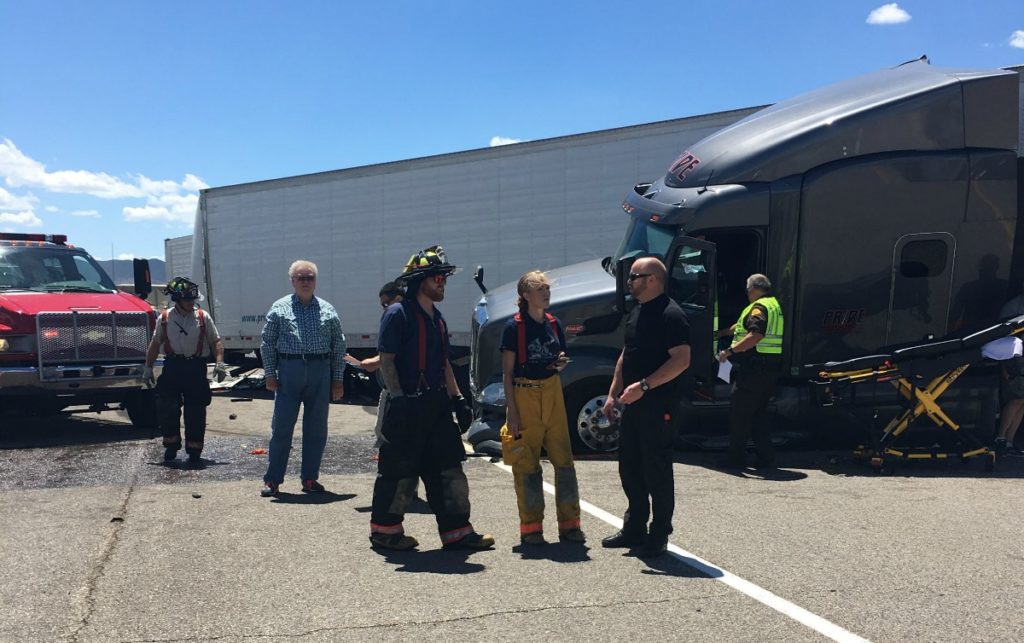 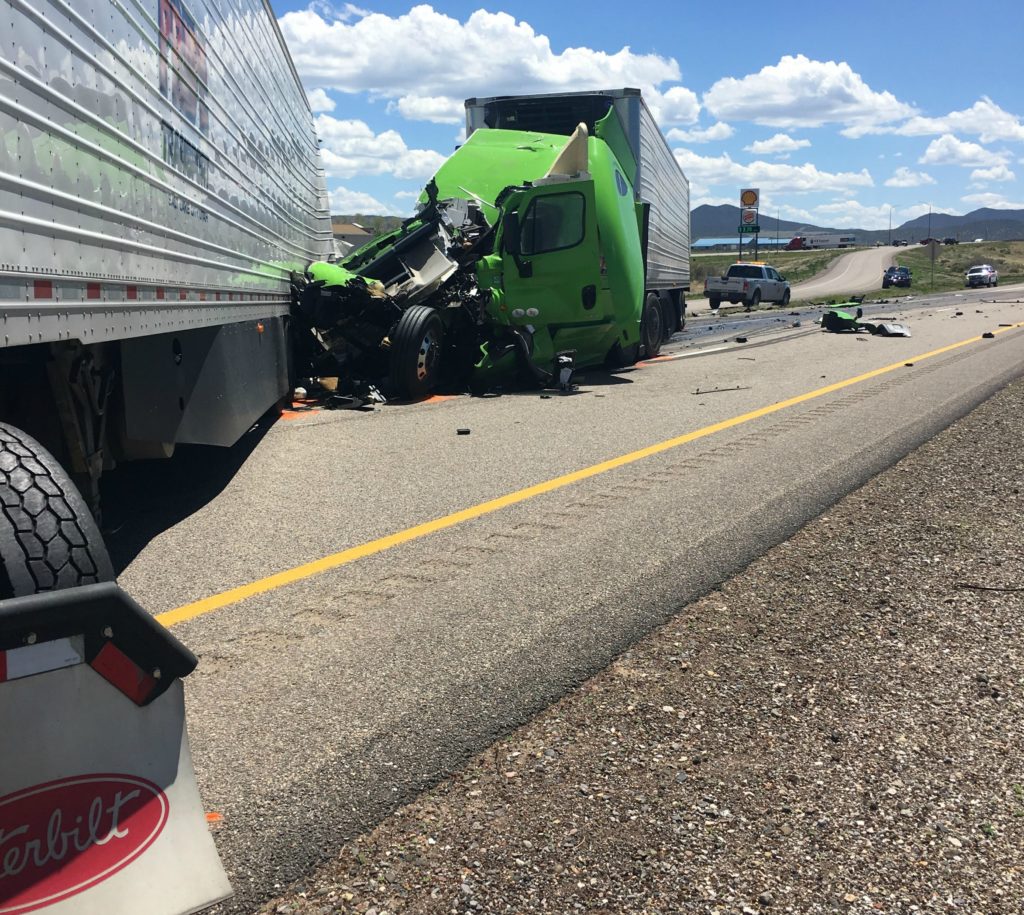 The cab of a green Wells semi-tractor trailer becomes wedged in the trailer of another semi, seriously injuring the passenger during a crash on Interstate 15 Friday afternoon, Beaver County, Utah, May 12, 2017 | Photo courtesy of the Utah Highway Patrol, St. George News

Truck, trailer rollover on I-15 injures one, delays traffic