ST. GEORGE — In an emotional naturalization ceremony in St. George held in the U.S. District Court, 15 people were sworn in as United States citizens after taking the oath of allegiance Monday afternoon. The ceremony was presided over by Magistrate Judge Robert T. Braithwaite.

Hailing from Peru, El Salvador, Mexico, Colombia, Costa Rica, Czech Republic, Brazil, Russia, Ecuador, India and Chile, the emotional men and women raised their right hands and pledged an oath to defend and support the Constitution of the United States and renounced all allegiance to their countries of origin.

For Nubia Tangreen, formerly of Colombia, it was a special moment, one that was many years in the making, she said.

“I am excited because it was work a lot of years,” Tangreen said. “I am very happy.”

The pathway to citizenship isn’t always easy. To be allowed to take the oath, prospective citizens must pass an English reading and writing examination and be able to communicate with officials in English as well as pass a government civics examination, said Laura McNeer, field office director for the Salt Lake City Field Office of U.S. Citizenship and Immigration Services.

“It’s nice to be able to share in this experience that they’ve worked so hard for,” McNeer said.

Almost all naturalization ceremonies are very special but this ceremony was particularly poignant as it was the first to be held in St. George — in the past people have had to travel to Salt Lake City for the ceremony as well as multiple times during the process of becoming a citizen.

Having the ceremony close to home allowed for a large crowd of supporters to attend and the courtroom was filled to capacity.

Braithwaite said that next time they will get a bigger room.

Because the ceremony was being held for the first time in St. George, Julie Wierschem, a deputy clerk from the U.S. District Court in Salt Lake City, attended and helped facilitate the process. It is the hope that there will be more naturalization ceremonies held in St. George in the future, Wierschem said.

“Now we want to be able to accommodate the people in this area,” Wierschem said. “I think that we’ll have them down here a few times a year.”

The number of times there will be a ceremony in St. George will depend on the amount of applications U.S. Citizenship and Immigration Services receive from people in the area seeking citizenship, Wierschem said.

The ceremony accommodated not only St. George residents but residents from all over the southern portion of Utah.

Tangreen resides in Moab, she said.

Prior to the swearing in, a brief patriotic ceremony was held. Members of the Dixie High School Air Force junior ROTC posted the colors of the United States and everyone joined in a recitation of the Pledge of Allegiance. Musical numbers including the national anthem were performed by the Dixie High School Madrigals.

Valerie King, vice regent of the Daughters of the American Revolution Color Country Chapter, spoke at the ceremony and encouraged all the new citizens to continue to honor their own cultures while fully embracing the American culture.

To those of you taking your oath of allegiance today, your journey on the road to U.S. citizenship is about to end and a new journey begins as an American citizen … The American way of life, liberty and the pursuit of happiness is yours to behold.

“It’s a really inspirational thing to watch people become new citizens and tell about their journey,” Wierschem said. “For some of them, they come from war torn countries and from refugee camps and it’s just a great reminder for those of us that were born here of all the things that we can enjoy and the freedoms that we have.”

In his remarks to the 15 men and women participating in Monday’s ceremony, Braithwaite said that he hoped the newly minted citizens would participate in all the rights, privileges and freedoms granted to citizens, especially the right to vote. 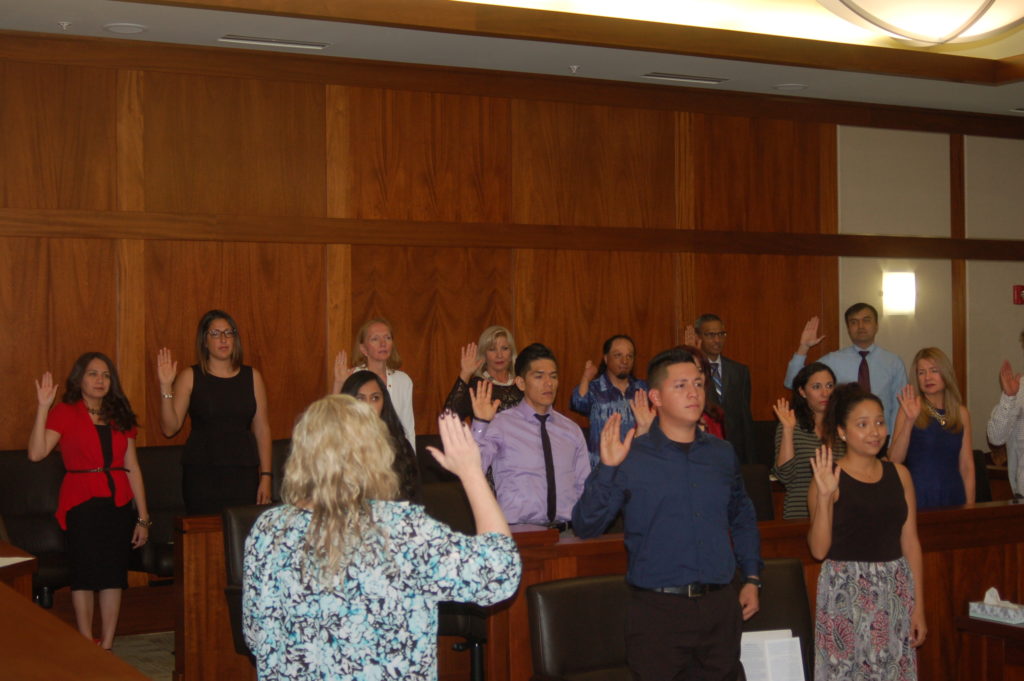 Fifteen men and women take the oath of allegiance to the United States Monday in a naturalization ceremony held in U.S District Court in Washington County, the first to be held in Southern Utah. St. George, Utah, April 24, 2017 | Photo by Hollie Reina, St. George News 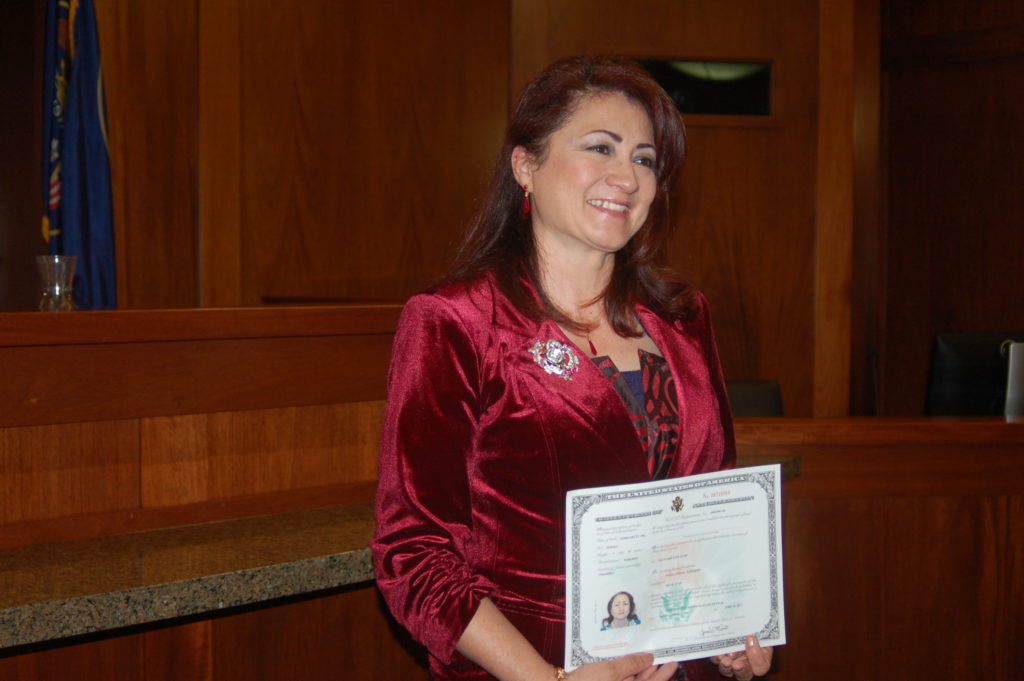 Nubia Stella Tangreen poses for a photo Monday after being sworn in as a U.S. citizen in the U.S. District Court in Washington Count. St. George, Utah, April 24, 2017 | Photo by Hollie Reina, St. George News 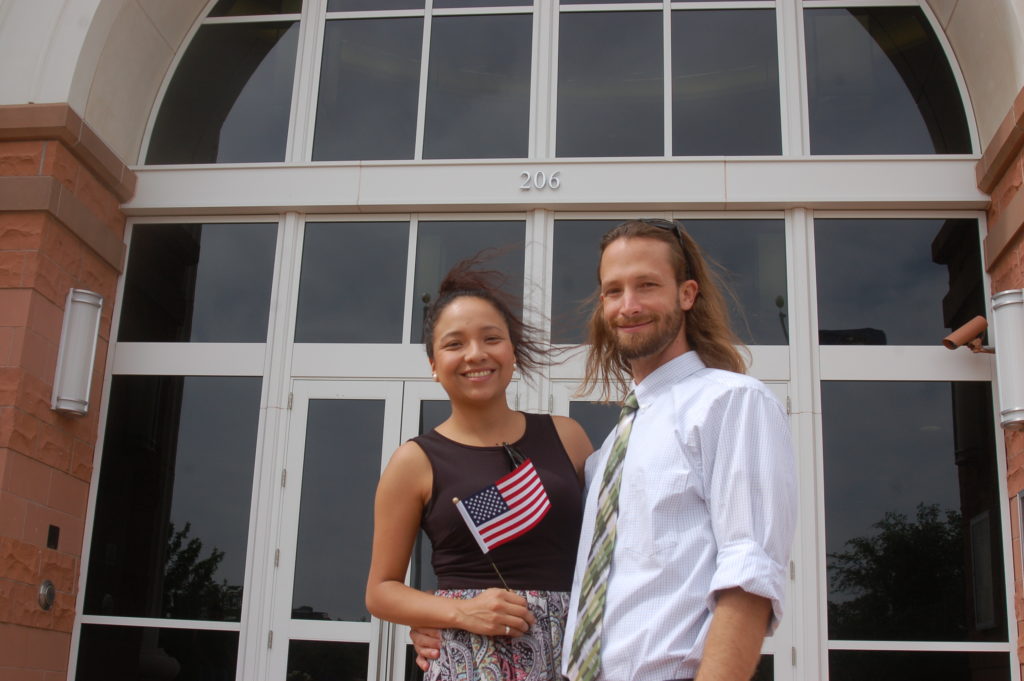 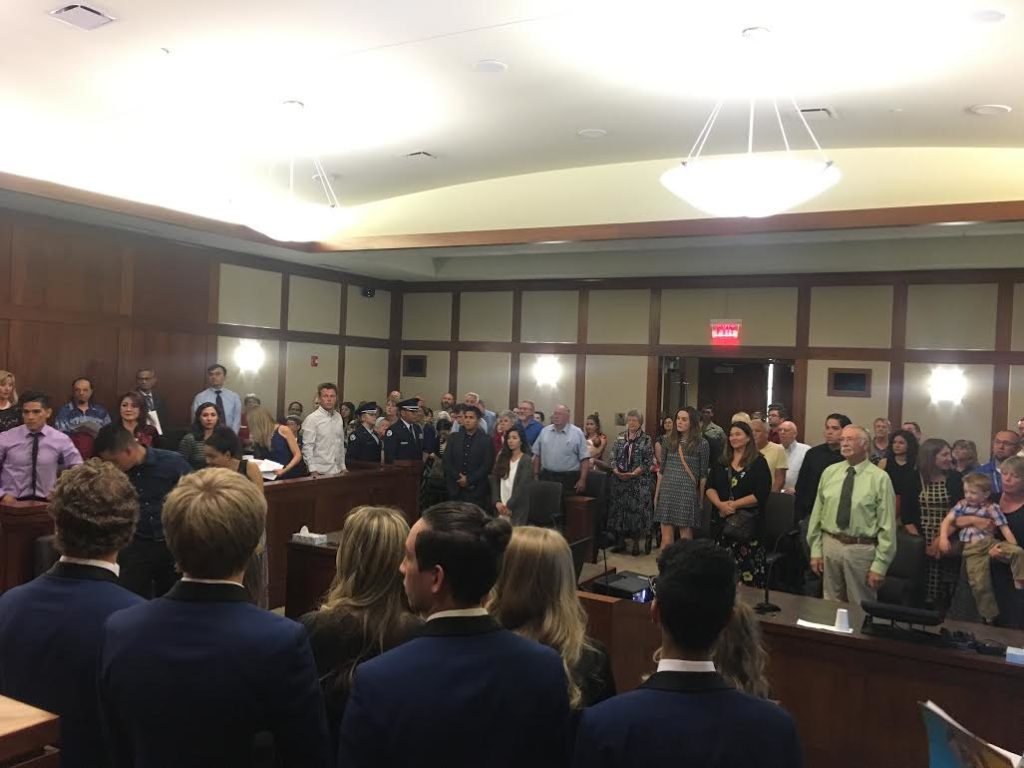 Foreign workers can apply for visas to work in US

Venezuelan activist moves to US after release from 'dungeon,' speaks of encounter with Joshua Holt