Semitractor-trailer on its side after the driver loses a wheel and tips over, sliding into a second semitractor Friday morning, St. George, Utah, April 21, 2017 | Photo courtesy of Lona Trombley, St. George News

ST. GEORGE — A semitractor-trailer lost a wheel during a turn which set off a chain of events that landed one driver in jail and and another semitractor driver with a damaged vehicle as responders worked the scene into the early morning hours Friday.

Shortly after midnight officers and emergency personnel responded to a crash involving a semitractor-trailer and a semitractor near the intersection of 120 East Street and 2680 South Street near the Pilot Gas Station, St. George Police Officer Lona Trombley said.

Upon arrival officers found the two semi trucks completely blocking a lane on 2680 South Street by the 2009 semitractor-trailer which was sitting on its side, Trombley said, and smashed into the side of a 2017 Hyundai semitractor that appeared to be parked.

After speaking with the driver of the 2009 semi, a 38-year-old California man, and the 52-year-old woman from Washington State who was driving the 2017 semi, officers determined that the 2009 semi was traveling north on 120 East and was in the middle of making a left-hand turn onto 2680 South to proceed west when one of the truck’s right rear tires came off of the trailer axle, causing the semi to tip over onto its side.

The semitractor and trailer remained connected and began sliding until it crashed into the rear portion of the 2017 semi that was parked on the north side of 2680 South, Trombley said, causing extensive damage to the 2017 semi’s trailer frame and prevented the rear doors from closing properly.

The driver of the 2009 semi told officers he was going “no more than 15 mph” when the incident occurred, Trombley said. Officers detected the odor of alcohol on the driver who was later arrested and booked into the Purgatory Correctional Facility for suspicion of driving under the influence.

Troopers from the Utah Highway Patrol conducted a commercial vehicle inspection on the semi after the crash. 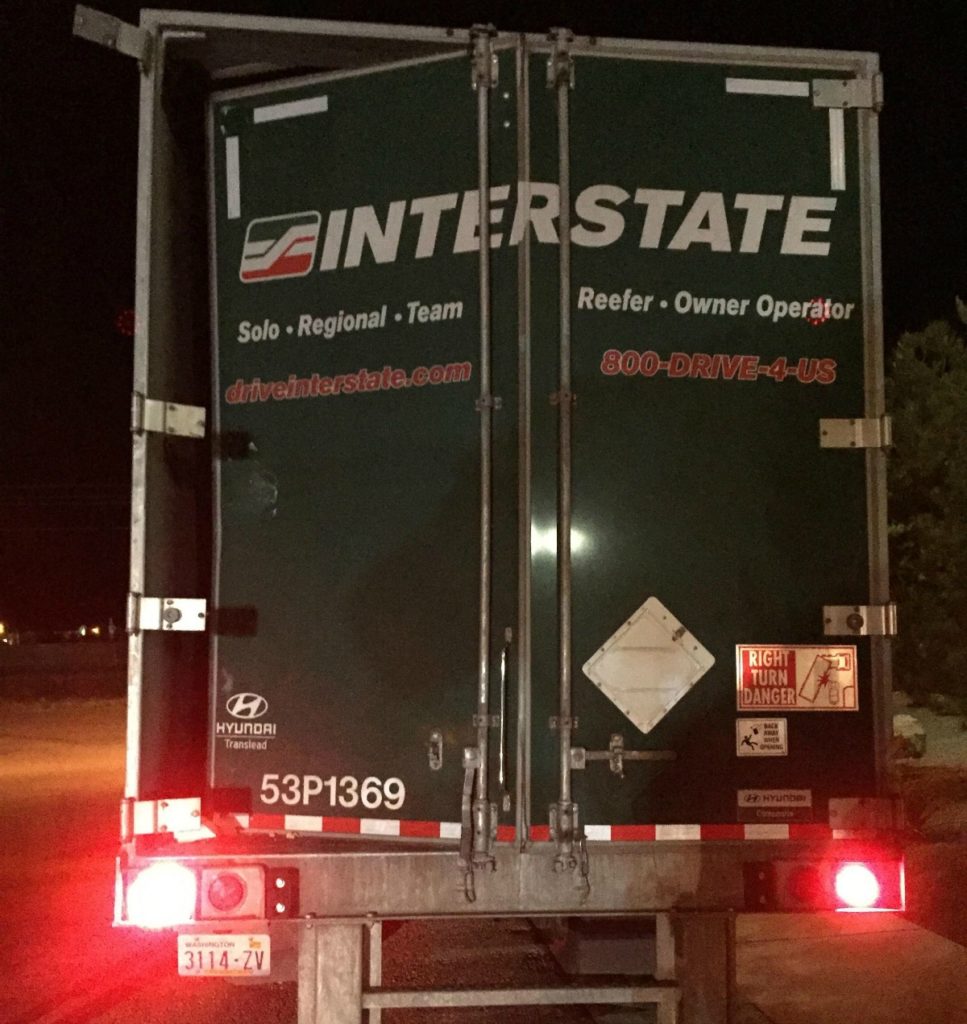 Rear of semitractor after another semi slides into its side early Friday moring on 120 East in St. George, Utah, April 21, 2017 | Photo courtesy of Lona Trombley, St. George News 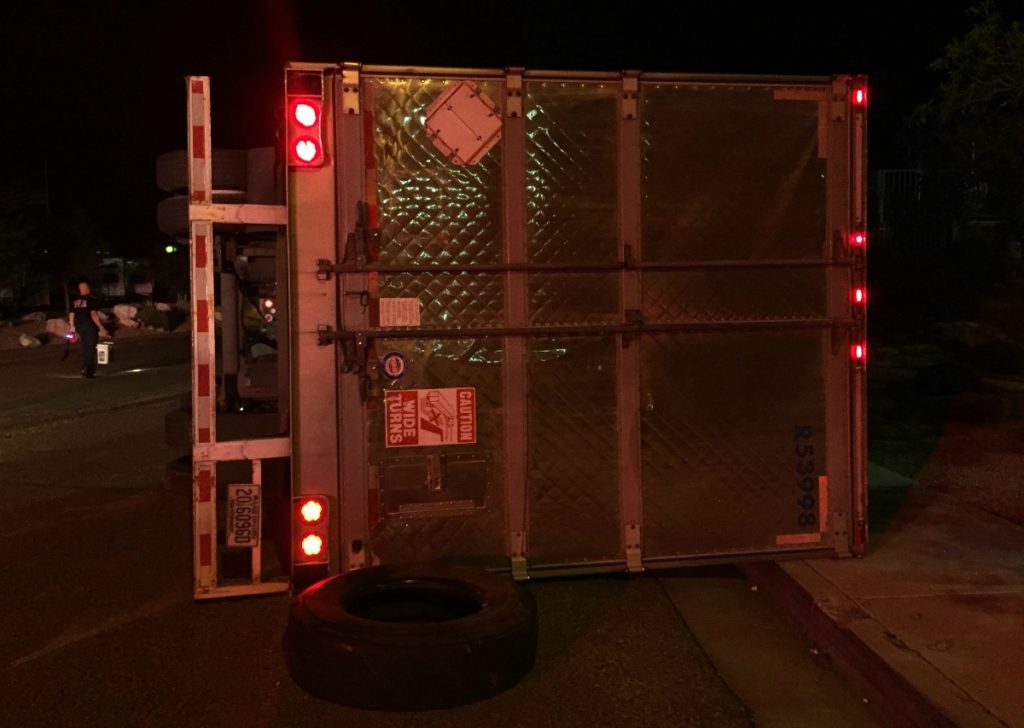 Semitractor-trailer on its side after the driver loses a wheel and tips over, sliding into a second semitractor Friday morning, St. George, Utah, April 21, 2017 | Photo courtesy of Lona Trombley, St. George News 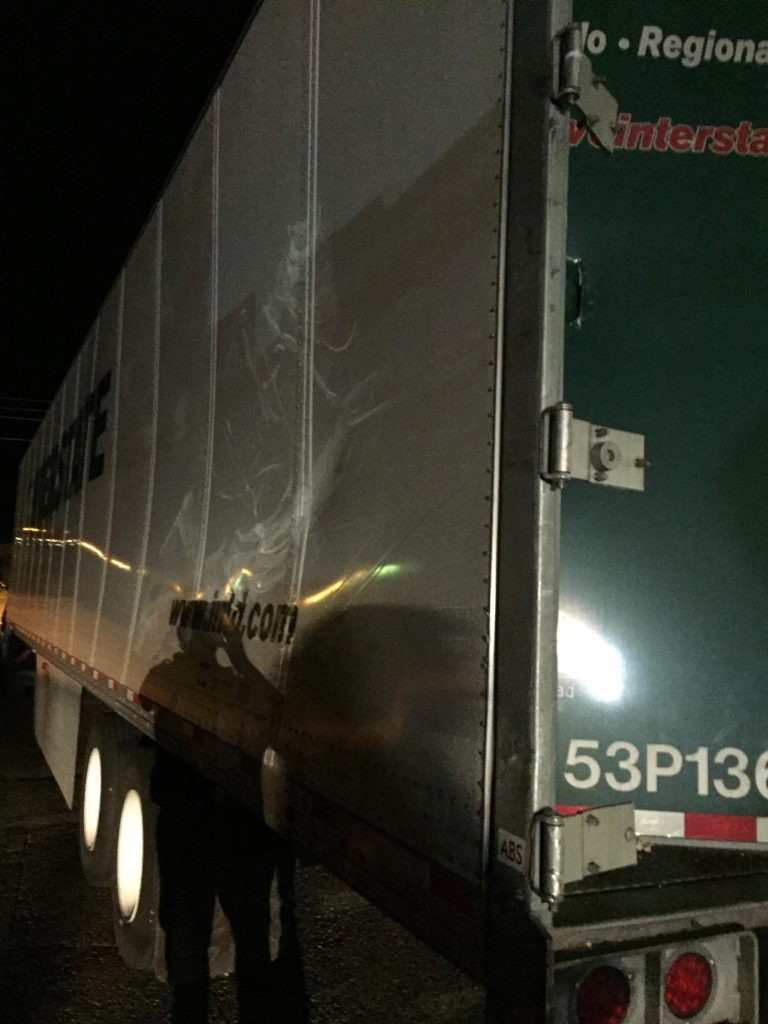 Driver's side panel of semitractor after another semitractpr slid into it after losing a tire early Friday moring on 120 East in St. George, Utah, April 21, 2017 | Photo courtesy of Lona Trombley, St. George News

Semitractor tires roll 1 mile after falling off on I-15