WASHINGTON CITY — In a ceremony held Saturday at Zion Harley Davidson, Officer Tank, Washington City Police Department’s “K9 with a million ‘likes'” was outfitted with a state-of-the-art bullet-proof vest to protect the four-legged law agent in whatever danger he may face.

Another furry crime fighter, Atticus, Washington City’s K9-in-training, will also be protected thanks to the Vietnam Veterans of America Southern Utah Chapter 961, as Dan Greathouse presented a check for the K9’s bullet-proof vest that will be presented later in the year.

The ceremony started at 10 a.m. near the entrance of Zion Harley Davidson located at 2345 N. Coral Canyon Blvd. in Washington City amid a crowd of onlookers, with the “Wall That Heals,” a traveling half-scale replica of the Vietnam Veterans Memorial in Washington D.C., in the backdrop.

“To have the vest presented here, with all of the veterans and even the memorial wall; it’s just a great opportunity for us to be a part of this,” Washington City Police Chief Jim Keith said.

“K9 vests are a passion for us. We love the dogs and we love to see them get the same protection as their human counterparts,” Whitney said.

The vest designed for Tank is “no different from what the officers wear, and is specifically fit for the K9 that is working side-by-side with the handler,” Keith said. “We want them protected in every way they can be.”

The “Bullet Blocker” is made from the thinnest material available. The vest Tank now sports is comprised of 13 layers of Kevlar, insulated with 1,000 count thread, flame resistant, can stop a .44 magnum bullet fired at point blank range and is stab resistant with up to a 4 inch blade.

The protection is fit for a police officer, Whitney said.

Vesting America’s Police K9’s, a subsidiary of Tread Armament, is a nonprofit organization launched in 2015 that provides bullet-proof vests for the K-9 officers across the country, having provided vests for more than 120 K9’s to date.

Ericksen and Tank completed a 2-month certification course and narcotics training to become certified narcotics detectors. Over the last 12 months, the K9 has been busy assisting Ericksen in the field. Both are scheduled to attend a patrol school in the months ahead where the duo will learn apprehension, evidence location and tracking techniques, as well as other facets of police work.

“It’s just been a fun ride to have the dog,” Ericksen said, “and to work with somebody who talks back more than my kids.”

Ericksen and Tank go to work together, they return home together, and when it’s time for Ericksen to relax, Tank is right there with him, the officer said.

Tank was born on January 6, 2015, to “Six” as part of Havoc K9, Inc’s program, an Ogden-based nonprofit group that raises and trains puppies to work with law enforcement and first responders before donating them to local agencies, saving departments as much as $20,000 per animal.

Tank was presented to the Washington City Police Department by Havoc K9,  in December, 2015, and has been at Ericksen’s side ever since. 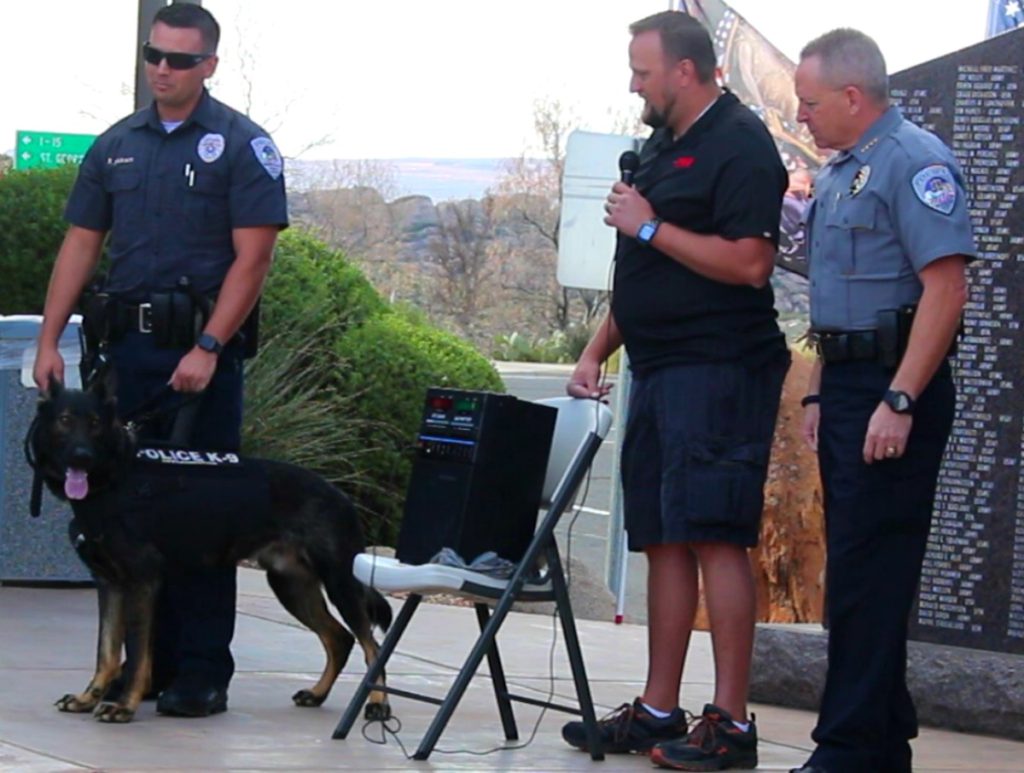 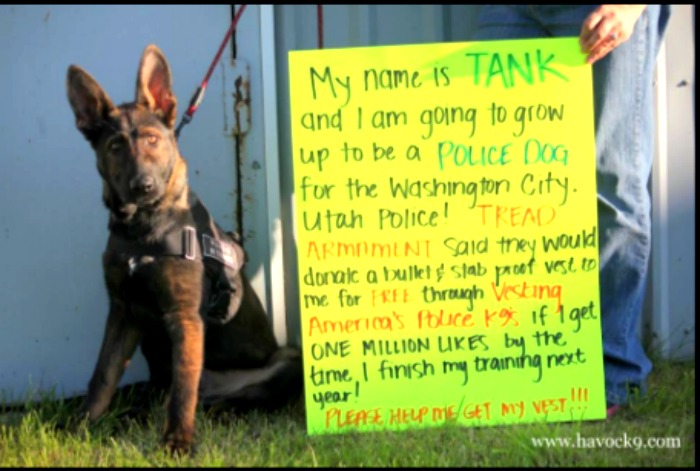 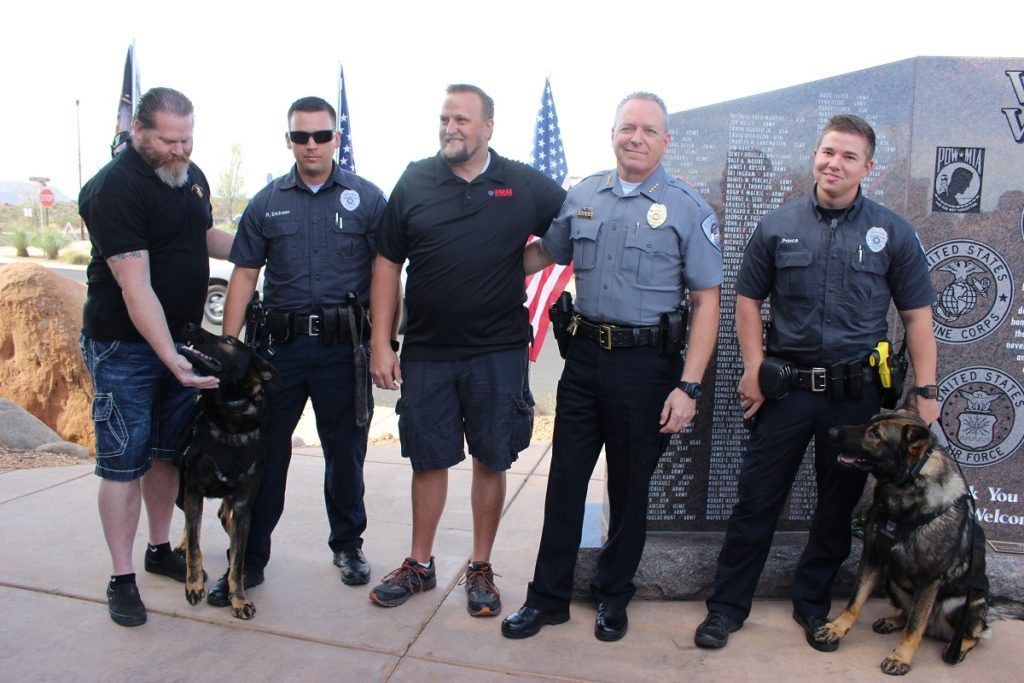 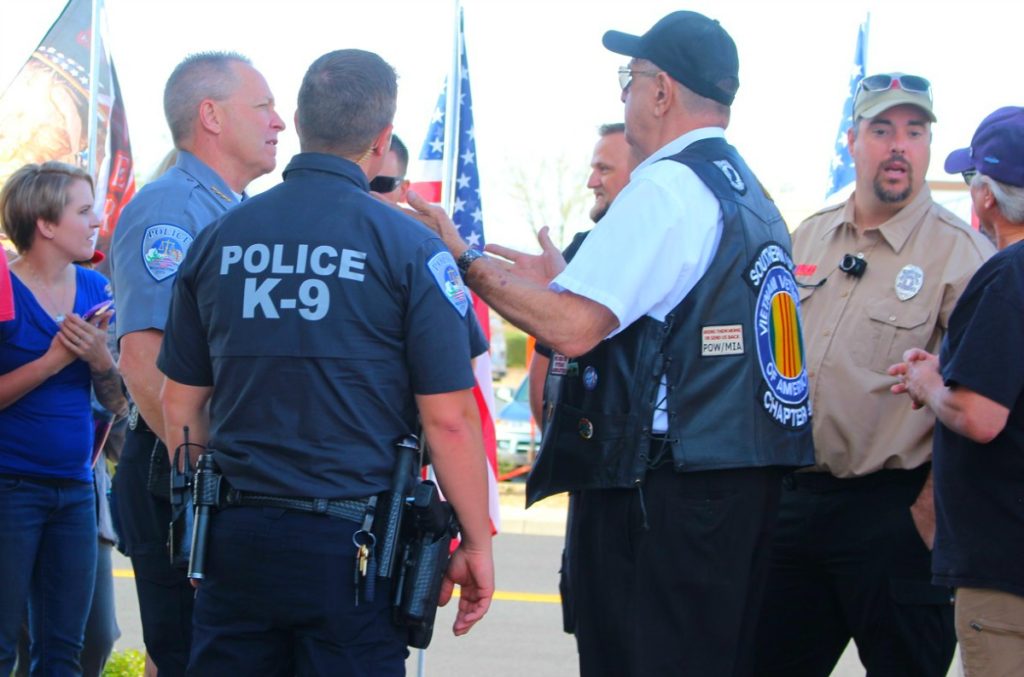