ST. GEORGE — Police are looking for two men in two separate incidents that occurred recently, and they are asking for the public’s help in identifying the suspects.

The first man is a suspect in a vehicle burglary.

“He … took some stuff out of a vehicle,” St. George Police Detective Jud Callaway said. “And then he went into a store to return some stolen gloves that still have the tag on them.”

Callaway chuckled when he told how that all worked out.

“(The refund) was actually reimbursed to the original owner,” Callaway said. “Because of the credit card. So he (the burglar) didn’t get any money and then he walked out and didn’t say anything.” 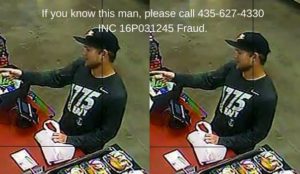 The second incident is a man wanted for fraud. St. George police have released a picture of the wanted suspect.

Do you recognize this person? Police seek duo wanted for jewelry store theft

Do you recognize this person? Police seek duo wanted for passing counterfeit bills

Letter to the Editor: Lake Powell Pipeline would affect traffic and recreation experience