PORTLAND – Elijah Bryant finished with a career-high 39 points and went 10 of 17 from the field and 12 of 12 from the stripe as BYU defeated Portland 97-78 on Thursday at the Chiles Center.

Bryant’s 39 points, combined with a career-high 11 rebounds from Braiden Shaw, who recorded his first career start for BYU (20-10, 11-6 West Coast Conference), contributed to the 19-point win over Portland (25-3, 15-2 WCC). Three additional Cougars finished in double figures, including Eric Mika with 19 points and eight rebounds, Nick Emery, who finished with 16 points and three 3-pointers, and Steven Beo, who recorded 12 points, tying his career-high. BYU finished the game shooting 50 percent from the field.

The Cougars recorded a season-high 13 3-pointers, with seven coming from Bryant. Bryant’s performance of 39 points are the most by any player in the WCC this season.

After Portland opened the game on top 2-0, BYU hit four straight 3-pointers from Emery and Bryant, and the Cougars took a 12-3 lead that was then extended to 14-3 after two Mika free throws. The Pilots fought back, however, scoring four straight points before Bryant and Mika combined for seven more points and a 20-7 lead with 14:14 remaining. 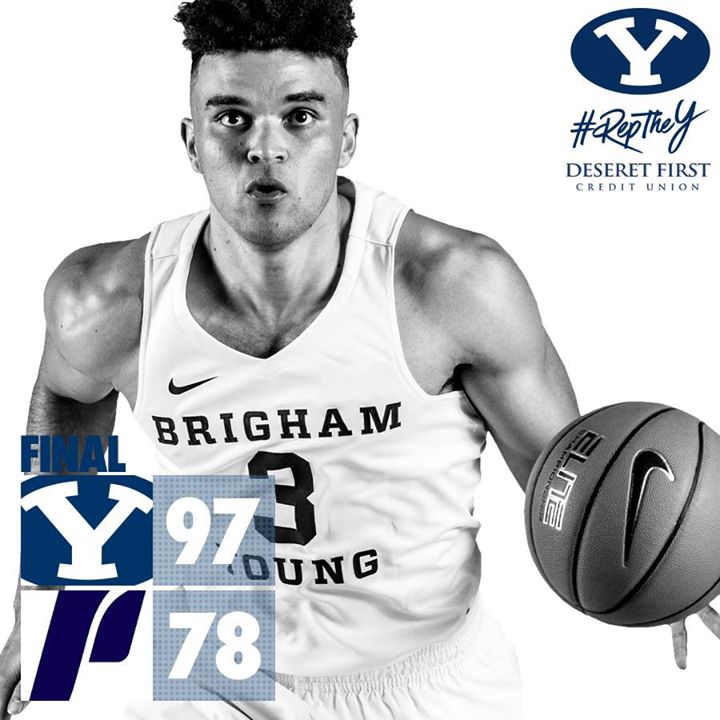 Bryant and Emery continued to fire away from 3, each recording another trey, with Mika scoring a layup to put the Cougars up 28-13 over the Pilots. Following a timeout, Emery drained a third 3-pointer, followed by two Bryant free throws, before BYU went scoreless for the next two-and-a-half minutes. Emery then took the lid off the basket with a jumper and the Cougars went up 35-19 with 8:32 remaining in the half.

Shaw and Beo began contributing to the Cougars’ total, each recording a field goal to put BYU up 39-23 with 6:33 to go. Mika came up with BYU’s next seven points, but turnovers began to plague the Cougars as Portland cut the deficit to 12 with free throws, a jumper and a 3-pointer with 1:37 remaining. Bryant entered the game again and scored four quick points and Emery finished off the half with a free throw with one second left and BYU went into the locker room up 51-34.

The Cougars opened up the half with a Mika jumper, followed by Haws’ first points of the game, a 3-pointer, to put BYU up by 20, 56-36. Mika and Shaw combined for four more points before Bryant scored yet another 3-pointer. Beo recorded five more points including a trey to extend the Cougar lead to 25, 70-45 with 13:47 left in the game.

BYU began to slow down a bit in the final minutes, but two more 3-pointers from Bryant were enough to maintain a comfortable lead over Portland. Mika, Emery, Beo and Frampton all contributed additional points in the final four minutes while a rare eight-point possession for the Pilots shortened the Cougar lead to 17, at 95-78. It would prove inconsequential, however, as BYU cruised to victory, defeating the Pilots, 97-78.

The Cougars will next travel to Spokane to conclude the regular season against No. 1 Gonzaga at McCarthey Athletic Center. The game starts at 7 p.m. PST and will be televised on ESPN or ESPN 2 and broadcast on the radio on the Cougar IMG Sports Network, KSL 102.7 FM/1160 AM and BYU Radio – Sirius XM 143.

Braiden Shaw picked up the first start of his career. He grabbed a career-best 11 rebounds and scored four points to go along with two assists.

Steven Beo tied a career best with 12 points off the bench. He posted three rebounds and one steal.

BYU won its 20th game this season, making it 12 consecutive seasons for BYU and Coach Rose with at least 20 wins. Entering the game, the streak was tied for 12th all-time in NCAA history. It also extends a program record.

The Cougars drained 13 triples to set a new season high, topping the previous mark of 10 set against Valparaiso and Pacific.

BYU’s 51 first-half points tied for the second-most in a first half this season for the Cougars.

No. 22 Saint Mary's shoots the lights out at Marriott Center

He's back: Hot-shot Emery leads BYU to win over USD