A Las Vegas couple stands outside their car after a man jumped in front of it on I-15 Monday. The man's PT Cruiser is seen in the background. Washington, Utah, Feb. 20, 2017 | Photo by Ric Wayman, St. George News

WASHINGTON — A man who stopped his car in the middle of Interstate 15 Monday afternoon just south of the Green Springs exit also got out of his car and stepped into traffic, according to witnesses.

“This guy in a PT Cruiser stopped for some reason, we don’t know. It appears his car was involved in some kind of crash,” Utah Highway Patrol Sgt. Jake Hicks said of the 1:15 p.m. incident. “His car was somewhat disabled. He got out, stepped into traffic; according to the witnesses he appeared to purposefully step in front of the vehicles.”

Lori Novero of Las Vegas was driving the minivan that hit the man first.

“I saw him get out of his car. He was waving at me as if to tell me to slow down,” Novero said. “I swerved to miss him a couple of times, then he just threw himself onto the hood of my car. Bent the antenna and he hit the windshield and bounced off. We couldn’t miss him. We tried. And tried.”

The man wasn’t done, however.

Hicks said the man then threw himself at the next car in line, a car driven by a couple from Las Vegas, Nevada. He broke the right rearview mirror off when he struck the vehicle, hit the pavement, and didn’t move.

“Other traffic came in and swerved just in time to miss him,” Hicks said. “The PT (Cruiser) driver, he remained there on the ground.”

“I don’t understand why he would do something like that,” the passenger in the second car, Denise Hunt of Las Vegas, said.

Traffic was at a standstill for about 15 minutes, backing up quickly to the Bluff Street on-ramp. The left two lanes were eventually opened, the right lane remained closed for about an hour while investigation and cleanup occurred.

The PT Cruiser was towed while the other cars involved were able to drive away after the investigation.

Hicks said no citations were issued and the incident remains under investigation. 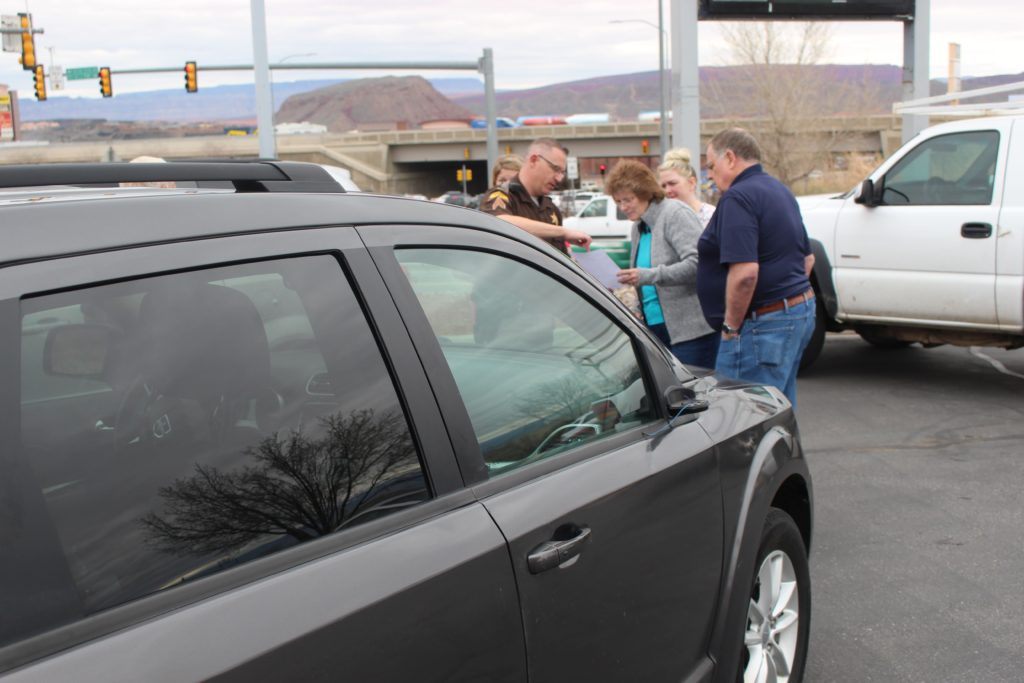 UHP Sgt. Jake Hicks talks with the people involved in the incident on I-15 where a man threw himself into their cars. The broken-off mirror on the second car is in the foreground. Washington, Utah, Feb. 20, 2017 | Photo by Ric Wayman, St. George News 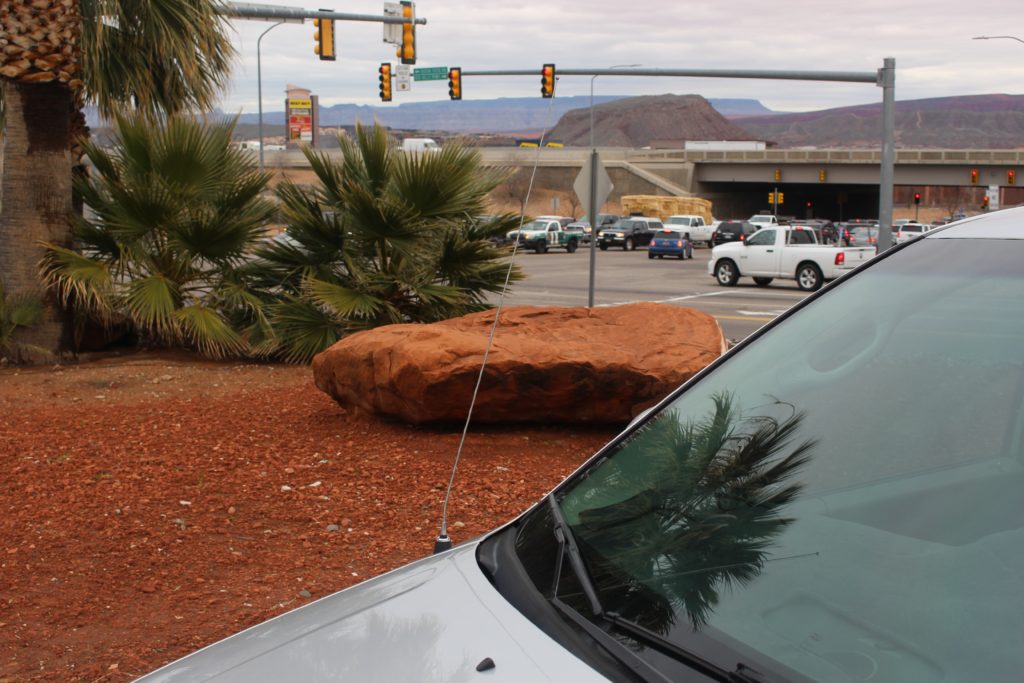 The bent antenna of a Dodge minivan shows the impact that a man made when he threw himself at the van. Washington, Utah, Feb. 20, 2017 | Photo by Ric Wayman, St. George News 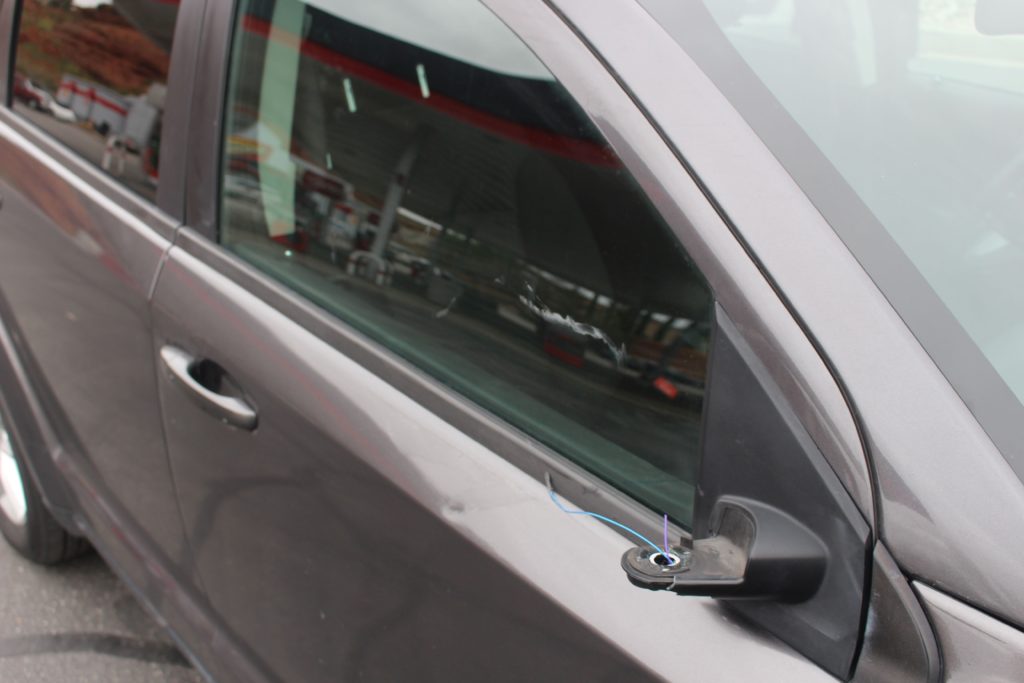 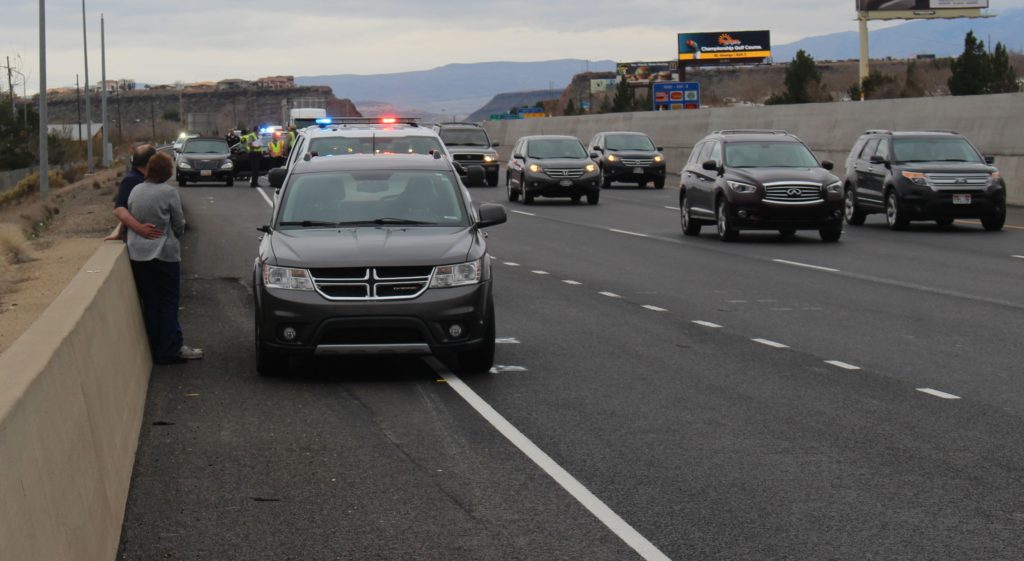 A Las Vegas couple stands outside their car after a man jumped in front of it on I-15 Monday. The man's PT Cruiser is seen in the background. Washington, Utah, Feb. 20, 2017 | Photo by Ric Wayman, St. George News

Semitractor tires roll 1 mile after falling off on I-15

Driver slams car into light pole after exiting I-15