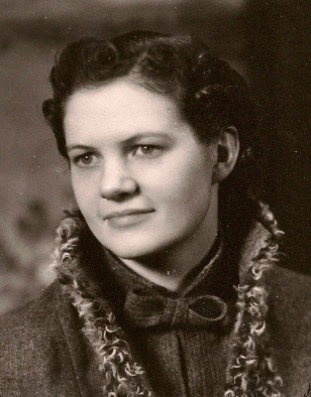 Born in Virgin, Utah, May 16, 1917, and after a long memorable life of 99 years, Nelda Whitehead passed away at her home of natural causes on Jan. 31, 2017. She lived with her parents, Henry Cornelius and Emma Bradshaw, in Virgin with her two sisters and six brothers, enjoying the simple pleasures of a small town, a one-room school house, and as a member of The Church of Jesus Christ of Latter-day Saints.

Upon completing the 8th grade, she moved to Mesa, Arizona, with her brother to attend school, living with relatives. Returning to St. George to finish high school, she lived across the street from a Whitehead family with four sons. One of them was a young man named Howard. She began Dixie College but left school when she was recommended for a bookkeeping position at Pickett Lumber. Meticulous at her job, she began her life of service and generosity by buying her sister her first bicycle and doll and her mother her first refrigerator.

With two of her friends, after studying history, they formed the ABC Powers (Alsop, Burgess, and Cornelius) and socialized with several young men calling themselves The Company. Her sights were set on Howard, and after he accepted a teaching position in Manti, Utah, she asked him if he was really going without her. They were married in the St. George Utah LDS Temple on Aug. 27, 1940, and moved to Manti. After a year they moved to Salt Lake City where her husband taught at the University of Utah. He was then accepted at the University Of Southern California School Of Dentistry and they settled in Los Angeles. Since it was World War II, all students were in the Army while attending school. Fellow classmates became lifelong friends and bridge became a part of the next 40 years, playing each month with dentists and their wives.

California was home for 65 years where they raised their family of four girls and two boys. One interruption came when the Korean War required the family to move to El Paso, Texas, for two years. A favorite family memory is the Sunday dinners after church with many servicemen joining them. Besides being a full-time homemaker, she enjoyed working with her hands making porcelain dolls and ceramics. Sewing and seeing that her girls were skilled in this area was important to her. She was on the board of California Utah Women, enjoyed square dancing, making pinecone wreaths with her son and selling them to department stores, which included Neiman Marcus. Her culinary gifts produced zucchini pie (tasted just like apple pie, fooling grandchildren). She loved flowers, with many blooming around her home along with her vegetable gardens.

She was the driving force behind family traditions that included 25 years of vacations at Lake Powell, Valentine cookies delivered to friends along with a jerk valentine, triple treat cookies, and slumber parties on the floor in her home on Christmas night. Marathon Rook games are top of the list with grandchildren and each was thrilled when they could rarely beat Grandma and Grandpa with a 200 sweep. During the year, we would blow out eggs and stuff the shells with confetti. On Dec. 31, we would take them to the Stake New Year’s Eve dance where they were popular with most, well some, recipients.

She traveled to Rome when her daughter won a national Singer Sewing Contest, went to Canada, Hawaii, Bolivia, and just plain enjoyed being home. Her life was filled with service to others and she had a special fellowshipping gift for making people feel welcome. Besides serving in many callings in the church, she spent 12 years with her husband as ordinance workers in the Los Angeles LDS Temple.

Howard, her husband for 72 years, preceded her in death. She is survived by her children; Elaine (Bruce) Miller, Linda Johnston, Kathleen (Quentin) Goodman, Gordon (Grace) Whitehead, Wendy (Kenny) Farr, and David (Cara) Whitehead. She was intricately and actively involved in each of the lives of her 34 grandchildren and 79 great-grandchildren. We express our gratitude to Sheri Howard, her devoted caregiver for six years and Canyon Hospice.