ST. GEORGE – Cedar got its first loss and Dixie got its first win, leaving no team undefeated nor without a win in the first three games of Region 9 play. Desert Hills, Cedar and Pine View lead the region at 2-1, but Snow Canyon, Hurricane and Dixie are only one game back at 1-2. Below are summaries of Tuesday night’s action:

The Lady Panthers defense held visiting Cedar to single digits in the first three quarters. Sporting a 12-point lead to begin the fourth, Pine View then had to hold off a barrage of scoring from the Lady Reds as their offense finally awoke.

“I think the general attitude was that we were going to walk in here and win just by showing up,” said Cedar head coach John Elison. “We finally played like we were capable in the fourth quarter, but then it was too late.”

Cedar matched the previous three quarters’ offense by doubling its score in the fourth quarter. One play that Cedar worked to perfection in the fourth was the pick and roll with Carley Davis getting three straight baskets during a crucial stretch.

“I wish we had tried that earlier,” said Elison. “Nothing else was working as well as that play.”

The success forced Pine View Coach Chris Brinagh to call a timeout and make the adjustment.

“Our girls were flashing to the ball and then recovering,” said Brinagh. “But their passing to Davis was so good that we could not recover in time. So we had to have help from the weak side.”

Before Brinagh made the correction, however, the Lady Reds had trimmed PVHS’s 34-22 lead to 34-32 with four minutes still to play. Fifteen seconds later, Saraven Allen nailed a 3-pointer to get the lead back to five points.

Allen scored the next three points for Pine View, all from the free throw line. Cedar also went 3 for 4 during the stretch and trailed 43-39 with less than one minute left. Pine View took out the ball at mid court. Dawn Mead found Claire Newby all alone under the Pine View basket for the easy layup. But a whistle negated the points and Allen was called for her fifth foul and had to go to the bench.

“At that point, I was pretty worried,” said Brinagh. “Saraven (Allen) is such a presence on the court both with her defense and free-throw shooting.”

After an empty Pine View possession Cedar got the ball to Dream Weaver for a 3-point attempt. The shot fell short and ended up in the hands of Panther Bailia Milne, who was immediately fouled. Milne went to the line and hit the front end of the one-and-one but missed the second.

Cedar got a chance to tie the game, this time with Robinson shooting from straight on. But the shot again fell short. And once again Milne found the ball in her hands. She was fouled again. This time she was in the double bonus and she calmly went to the line and hit both shots to put the game out of reach.

“My mindset was ‘This is just like practice,’” said Milne. “I just went and shot the free throws like I was in practice, not in the game.”

“I can’t say enough about her play at the end,” said Brinagh. “She is a sophomore with very little varsity experience. She goes into a pressure game against a good team and plays like she belongs on the floor.”

Robinson hit a meaningless 3-pointer as time expired to get to the final score, 46-44.

“Maycee usually starts for us,” said Brinagh. “We felt that instead of having all of our best offensive players start the game, we would adjust our lineup and bring Maycee off the bench. We thought she would have more opportunities to score if she came off the bench. She was a spark plug tonight.”

At the end of the first quarter, Pine View’s lead was 7-6. The lead evaporated quickly in the second as three separate Lady Reds scored to start the quarter. Davis assisted on the first basket from Emily Pearson and then scored on an inbounds play. Maisie Elison then drove to the basket and hit the runner to put Cedar up 12-7 with four minutes remaining in the first half.

The Panthers then held for two straight possessions and Leiani Tonga and Newby had consecutive baskets at the offensive end. With 29 seconds remaining in the half, Pine View had turned the tables and led 19-12. Cedar got the final score on a full-length pass to Japrix Weaver. Weaver fed the ball to Davis for the easy layup. The teams went into the locker room with the Reds down 19-14.

Coming out of the locker room, Cedar closed the lead to two points quickly. Dream Weaver’s drive cut the lead to 21-19 with 5:45 on the clock. From there, Allen and Newby took control and scored the next nine points. Newby’s 3-pointer with 2:50 remaining in the third gave Pine View its first double-digit lead, 30-20.

After two free throws from Cedar’s Davis, the Lady Panthers closed with four straight points, two each from Hayes and Dawn Mead, giving them the 12-point lead going into the fourth quarter.

Pine View outshot Cedar 38-35 percent from the field and 76-50 percent from the line. The Lady Reds outrebounded Pine View 29-26. Individually, Cedar’s Davis led all players with 17 points. She was joined in double figures by Robinson with 13. Dream Weaver scored six and Maisie Elison scored five. Davis led the team with nine rebounds. Robinson led the team in steals with seven. Dream Weaver dished out four assists.

Dixie got great shooting at home, built a big halftime lead, then held on to get its first win in Region 9 action. A big second quarter gave the Lady Flyers a 29-19 advantage. They almost gave it all back in the third, but still carried a slim 35-33 advantage. They then played the Lady Warriors even in the final stanza to pull out the win.

Dixie outshot the Lady Warriors 40-29 percent from the field and outrebounded them 35-21.

“Our girls came out ready for a win,” said Dixie head coach Jaime Araiza. “We knew we were going to get pressed and the girls remained calm for the most part and took care of the ball. Snow Canyon came with great pressure, especially on Kelsea (Barker), but she showed great leadership and the girls stepped up.”

“We didn’t play well in the first half and dug ourselves too big of a hole,” said Snow Canyon head coach Dan Roden. “The girls fought back, but we have some recurring problems we have to correct. It’s also impossible to win a close game when you go 11 for 25 from the free throw line.”

The Lady Tigers had problems offensively on the road at Desert Hills. Hurricane only managed 13 points over the first three quarters and trailed 30-13 going into the fourth. They would match that in the final period, but gave up 14 to the Lady Thunder.

“Desert Hills shot 58 percent in the first half,” said Hurricane coach Franci Homer. “They led from beginning to end and we could not catch up. We had a poor shooting night, but our defense improved in the second half.”

“We played well the first half,” said Desert Hills head coach Ron Denos. “We coasted the second half and Hurricane outrebounded us and took advantage of our turnovers and quick shooting.” 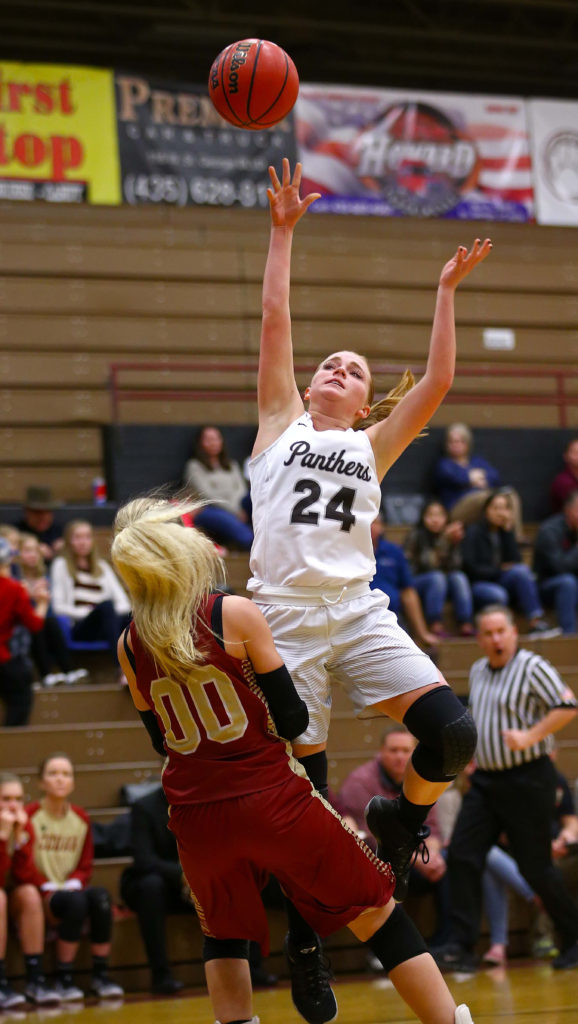 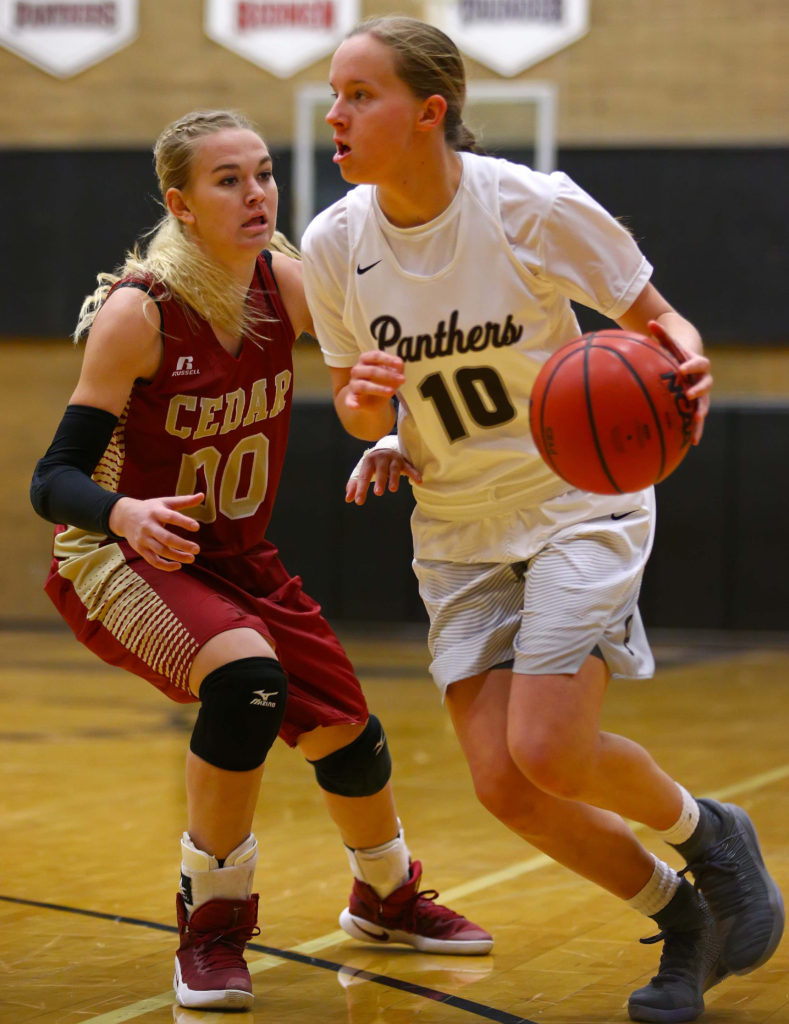 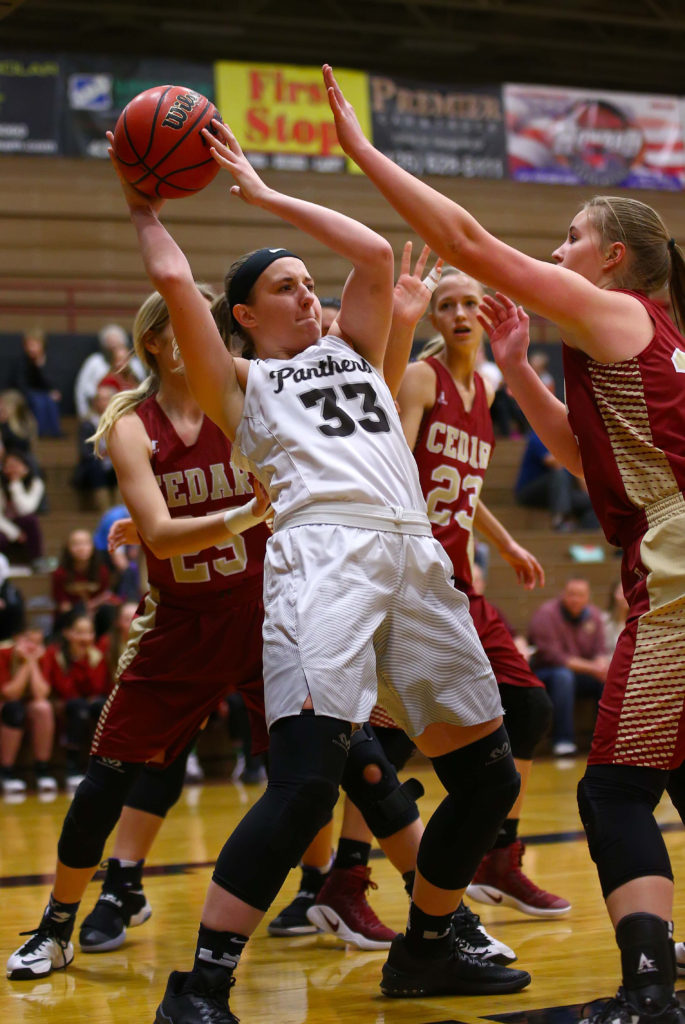 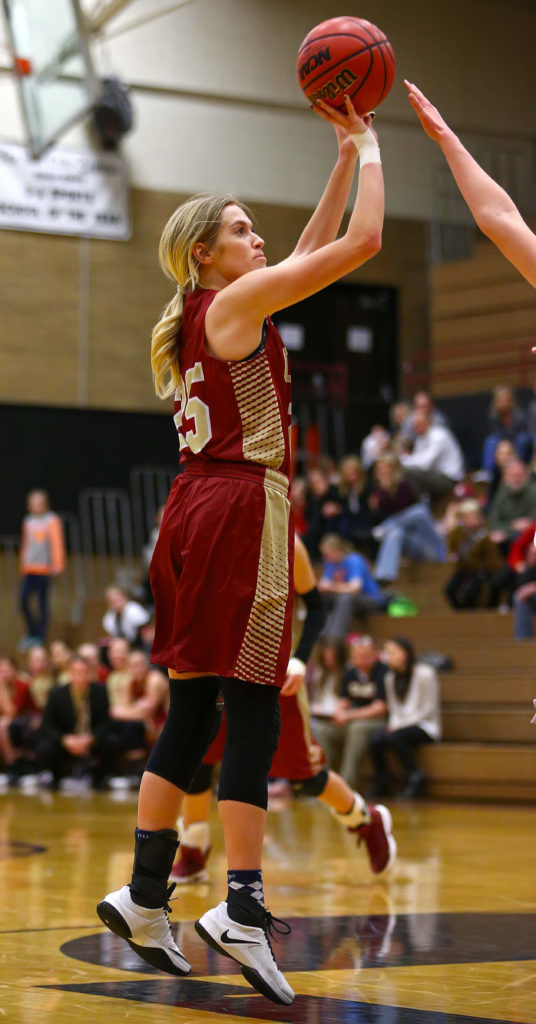 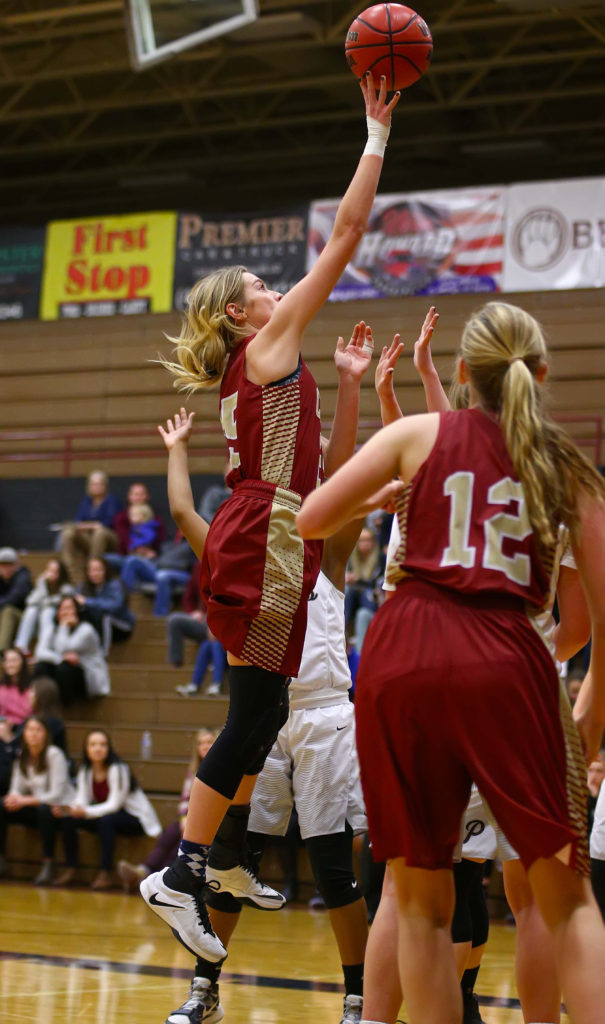 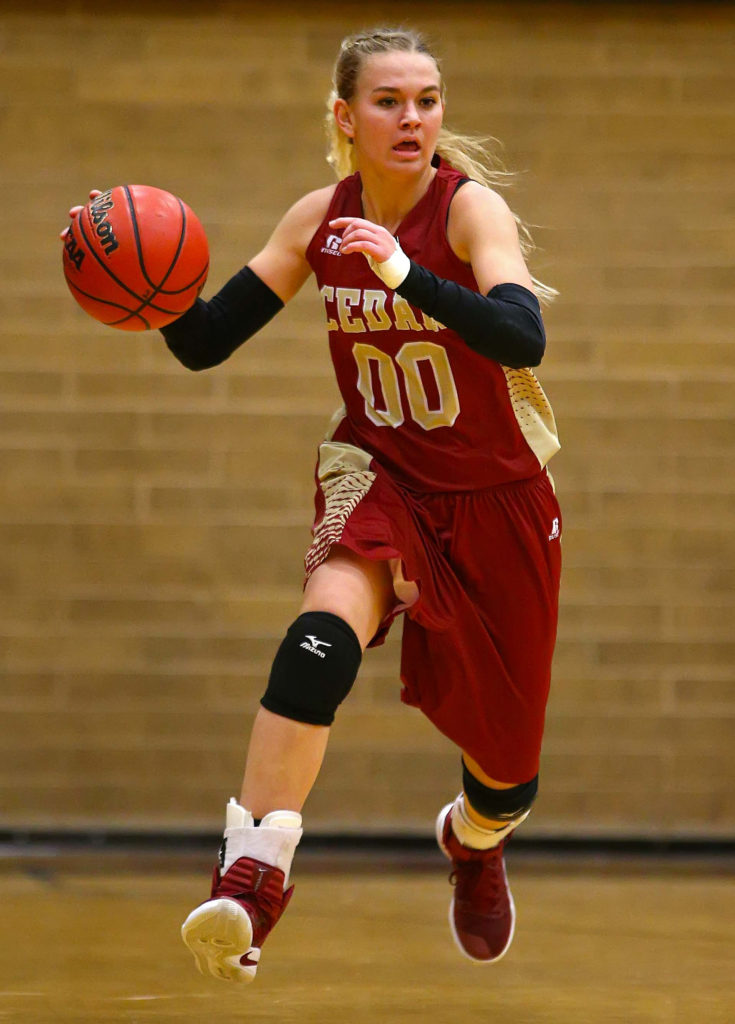 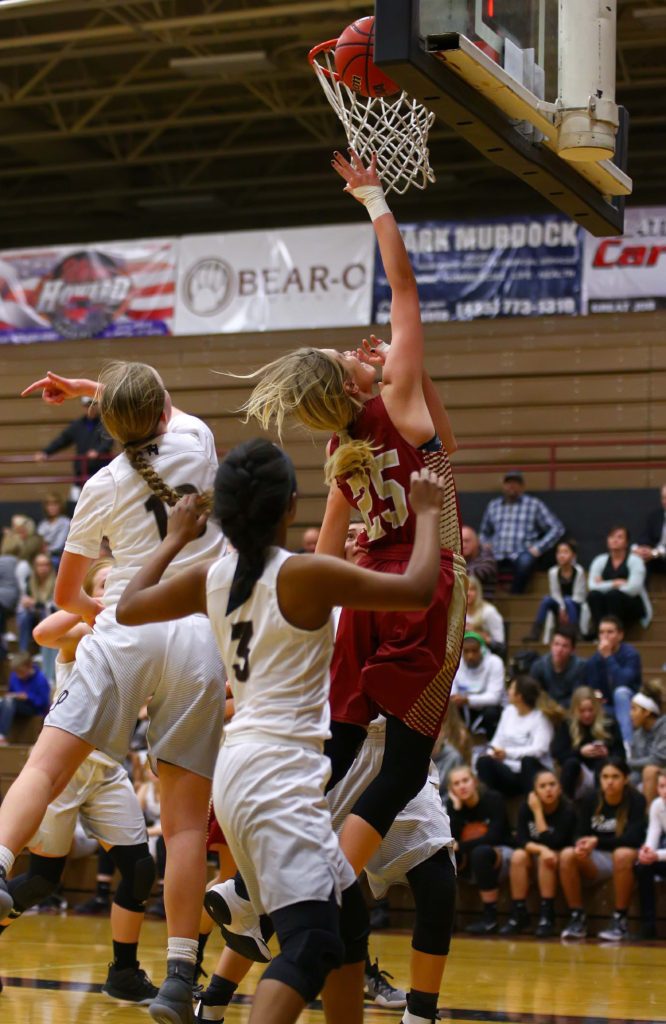 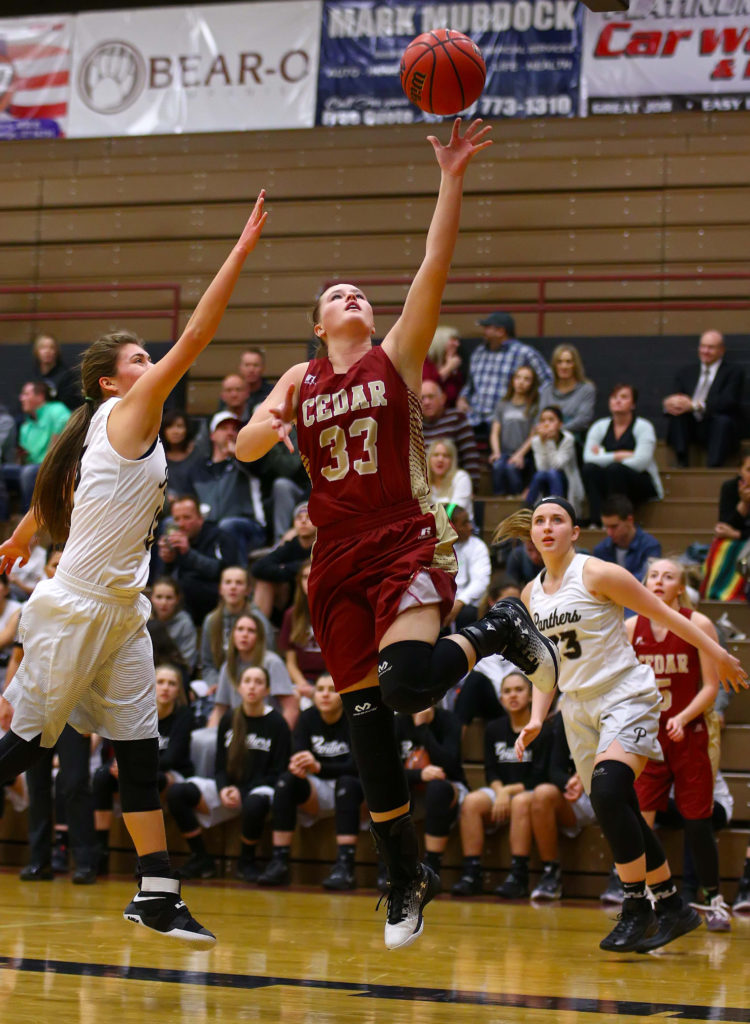 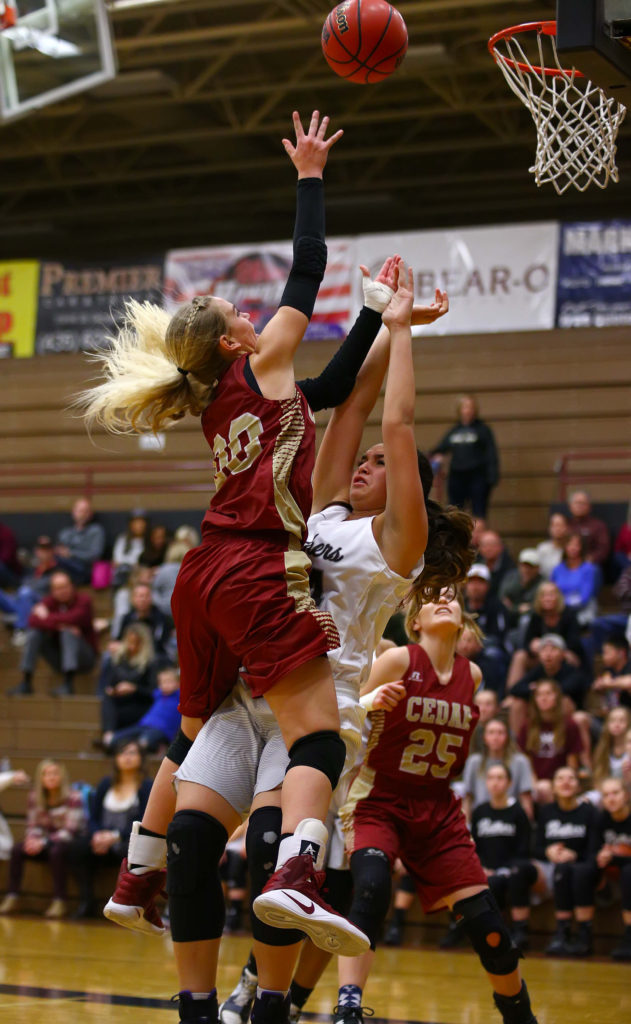