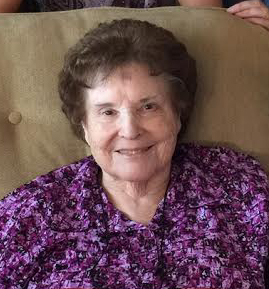 Kathleen Richards Shumway passed away Tuesday, Jan. 11, 2017, at her home in Rancho Cucamonga, California. She was born July 14, 1934, in Tropic, Utah. She was the 11th and youngest child of Thomas Ephraim and Blanche Ethel (Ott) Richards. Kathy married Dick McKay Shumway, also of Tropic, on July 1, 1952, in the St. George LDS Temple. Dick and Kathy later divorced in 1988.

The Richards family moved from Tropic to Vallejo, California, in 1942 where Kathy’s father worked at the Mare Island Naval Shipyard and returned to Tropic after the war. Kathy graduated from Bryce Valley High School in 1952 and was the class valedictorian. She was a very well-known and respected Real Estate Broker and owned her own office, Century 21 Monarch in Upland, California. She had a stellar work ethic and her word was her bond. Kathy excelled in business and won numerous awards.

Kathy was known for her generosity, love of travel and fierce loyalty to friends and family. She received The Distinguished Alumni Award of Bryce Valley High School in 2004 and was named Woman Of The Year of which she was proud and felt very honored to receive.

We have brought our dear Mother Kathleen home to be buried in the Tropic City Cemetery. We love her dearly and she will be missed.

California arrangements were made by Affordable Cremation and Burial (Fontana) and in Utah by Spilsbury Mortuary of St. George. Friends and family are invited to sign Kathleen’s guestbook at www.spilsburymortuary.com.