FEATURE — Gold Butte is 300,000 acres of rugged wilderness in Southern Nevada with a history as rich and colorful as its sandstone mountains. These two aspects of the area make for a beautiful place to explore.

In 1865 the Mormon pioneers began to settle in the Gold Butte region. However, the area was inhabited by the Moapa band of Paiutes for thousands of years prior.

In 1905, Gold Butte experienced a mining boom, and by 1908, the area became known as an attractive mining and grazing district.

“The mining boomtown enticed many sagey characters to settle there,” Jaina Moan, executive director of Friends of Gold Butte, said.

Today the area where people settled is a ghost town located just east of the former St. Thomas settlement, which was buried under Lake Mead in the 1930s.

Garrett was a single man, never married and balding at age 36. Riding a tall horse, Garrett was a skilled cowboy and trick roper rodeo man, Moan said, and he was handy with a six-shooter. Garrett was sent by a Texan rancher to catch some horse rustlers. He found the thieves and shot two of the men and a boy, and he got the horses. He never returned to Texas but ended up staying in Utah.

Mormons were well-established in Southern Utah by the time Garrett arrived. “Gentiles,” as non-Mormons were often called, settled in as well. Similar to the reason Garrett was sent to the area in the first place, a motivation that united the two seemingly disparate groups was defending their farms and ranches against rustlers.

One particular thief constantly bothered Mormons and Gentiles alike by stealing cattle, horses and anything else he could get his hands on. That is, until he stole Bill Garrett’s horse.

Garrett located the man, reclaimed his horse and left for home; however, the rustler followed Garrett and shot at him, missing him by just inches, Moan said. Garrett spotted the outlaw hiding behind a cactus. He aimed his six-shooter and fired at the center of the tall barrel cactus. The outlaw fell over dead.

Following the incident, Garrett turned himself in, and when he was tried by a jury of Gentiles, he was sentenced to jail. However, Garrett was a nephew of Sheriff Pat Garrett, who shot Billy the Kid. The sheriff talked Garrett into a retrial with a Mormon jury; they ruled he acted in self-defense, and he was set free.

Garrett later teamed up with an improbable partner: Art Coleman. Coleman was an educated man who could converse on any subject. He was thin, frail and a foot shorter than Garrett. Everyone referred to the pair as “the long and the short of it.”

This odd couple lived together in a rustic board house built along the Gold Butte Trail. They soon earned an impeccable reputation as honest men, reliable and friendly neighbors. No one passed by without being invited in for sourdough biscuits, coffee, beans and homebrew.

Friends kidded the two about their moonshine – if they made it, how they made it and if it tasted good. Garrett and Coleman kept their secrets, Moan said; the moonshine they shared with friends.

The mining boom in the area lasted until 1917 and brought many homes, mostly tents. A post office, general store, saloon and school were also built. At its peak, the town had an estimated 2,000 residents. However, the entire mining district only produced about $75,000 in gold, copper, magnesite, lead and zinc, and eventually miners pulled out.

Following the boom, most of the buildings were moved to the settlement of St. Thomas, and Gold Butte became just a crossroad for cattlemen and prospectors, men such as rodeo star Luther Swanner, long-time rancher John Lear and ranchers George Hartman and Howard Hughes.

Coleman and Garrett, however, remained in Gold Butte, Moan said, and both were buried behind their cottage on the Gold Butte Road. Coleman died in 1958 at the age of 82, and Garrett died three years later at the age of 81. Visitors to the area can still see the headstones of both men.

These days, when it comes to the scenic area, some locals call it “the nearest to heaven you’ll ever get.”

Within the Gold Butte area that President Obama designated a national monument on Dec. 28, 2016, is a plateau filled with surprise, intrigue and imagery; red and orange sandstone hobgoblins. This is a destination sought by many visitors and is often referred to as Little Finland, Devil’s Fire, but many call it Hobgoblin’s Playground. It has neither has an official name nor is it designated on any map at this time. Photographers love the area as photos look larger than life.

Many locals in Mesquite, Nevada, and the nearby Moapa Paiutes are happy that the Gold Butte area was finally made a national monument that will give more protection for this fragile environment. Damage to petroglyphs (also called rock art and rock writing) and sacred formations has taken place since the region was publicized about 20 years ago.

In August 2016, Vernon Lee, former tribal councilman who lives in the Moapa River Reservation, said in an interview with WRVO public media that the entire Gold Butte district belongs to the Moapa band of Paiutes. However, now only a sliver just north of Cliven Bundy’s place and adjacent to a coal-fired power plant designates their land.

In the end, the irony is that the Bundy standoff may have helped the tribe’s cause.

Ed. note: Analysis of the diverse views on national monument designations in Utah is beyond the scope of this feature series article.

January is a good time to visit Gold Butte to avoid temperatures that can rise above 100 degrees. However, wild flowers burst into bloom anytime from the middle of March to late April.

Visitors should prepare to take care of themselves with a two-day supply of water, fuel and a good spare tire. Adventurers should notify someone of their travel plans as there is no cellphone reception in this remote part of the Mojave Desert. Once at the destination, the closest highway is 37 miles away.

There is an unmarked 3.5 mile cross-country hike as well as the driving roads, which decline from paved and smooth for the first 21 miles to bumpy and partially paved to unpaved and stony and finally the last few miles “rough.” As you lurch along on primitive roads, you’ll understand that becoming stranded is very much a possibility.

As visitors drive deeper into the desert, the chaparral changes. Adding to the pungent creosote brush that may be Earth’s oldest living organism are the nurse plant white bursage, rabbit brush, prickly pear and a variety of barrel cactus. Spikey Mojave yuccas and desert marigolds flourish. The chaparral thickens with manzanita’s twisted reddish branches and flat round leaves, vivid green Mormon tea, silvery desert holly, Moapa buckwheat and lots of Joshua trees. If the conditions are right, poppies also blanket the area.

Visitors will arrive at the northernmost edge of the sandstone plateau. At the base of the plateau palm trees of the taxonomy Washingtonia filifera might surprise you as abnormal. But the Moapa Paiutes testify that palms were growing around the oasis long before the white men came.

Follow the plateau to the geologic fantasies – a short scramble to the top of the .5 mile plateau that slopes off with a view of roadless desert toward Lake Mead. The geology will make you smile. Take time to wander among the castles, raptors, gnomes and many hobgoblins. Thin eroded sandstone spurs extend out from their base, tiny arches, windows and narrow fins make very fragile formations. “Is that an alligator or a stalking cougar?” you might ask. The fantastic images are limited only by your imagination.

Other favorite exploring spots in the Gold Butte district are the arrastras, grinding stones used at mines around Horse Springs, News Paper Rock and the Falling Man petroglyphs, Devil’s Throat, a giant sink hole in the middle of nowhere and white rock formations around Whitney Pockets.

Luckily there are places that remain relatively unvisited because of remote locations. A busy day at Hobgoblin’s Playground or Little Finland, Devil’s Fire – whatever you call it – one might meet two or three other visitors but usually none. The serenity provides an experience never to be forgotten.

“Sometimes the rare, the beautiful can only emerge or survive in isolation,” said natural science author Loren Eiseley. Those who love this area say it combines strange natural beauty with solitude. 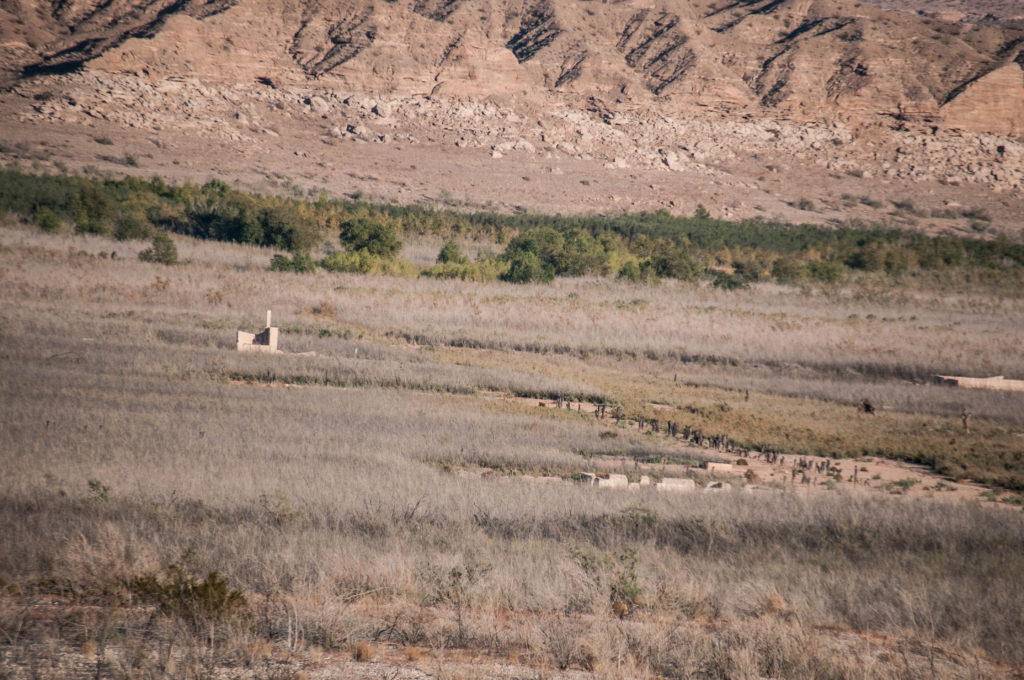 The settlement of St. Thomas was flooded by Lake Mead in the 1930s. In this photo, low water levels have exposed the area, Gold Butte, Nevada, November 2016 | Photo by Kathy Lillywhite, St. George News 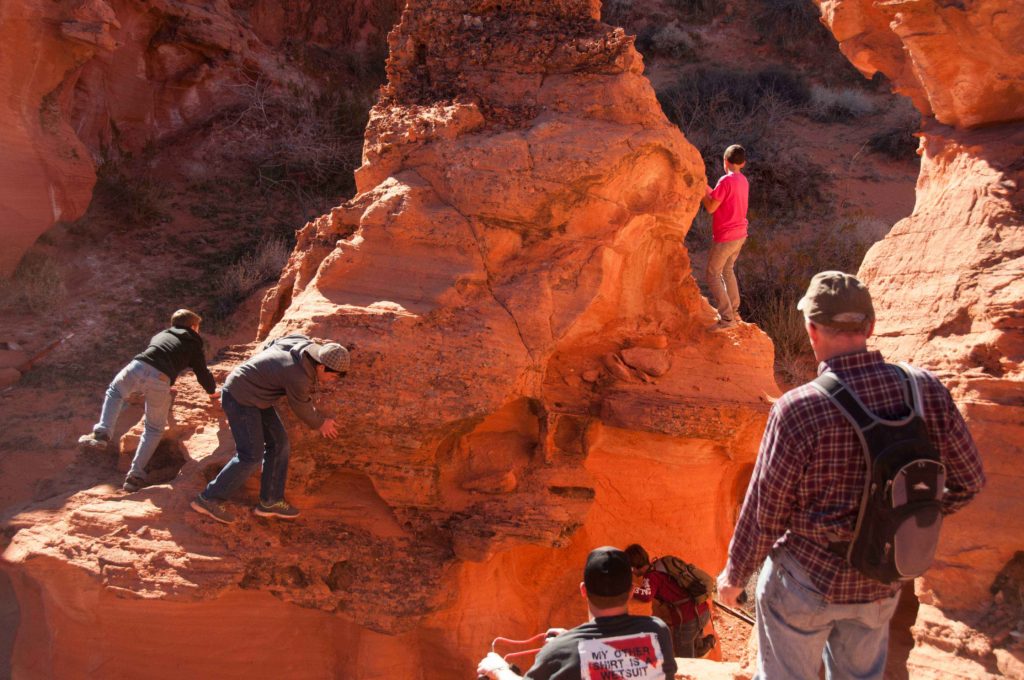 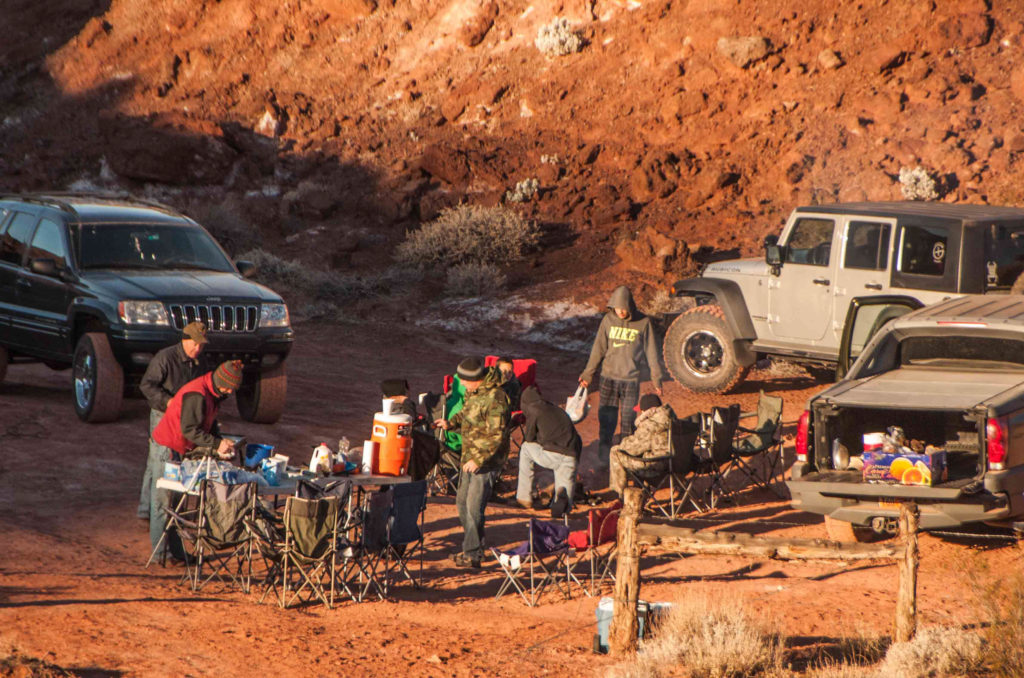 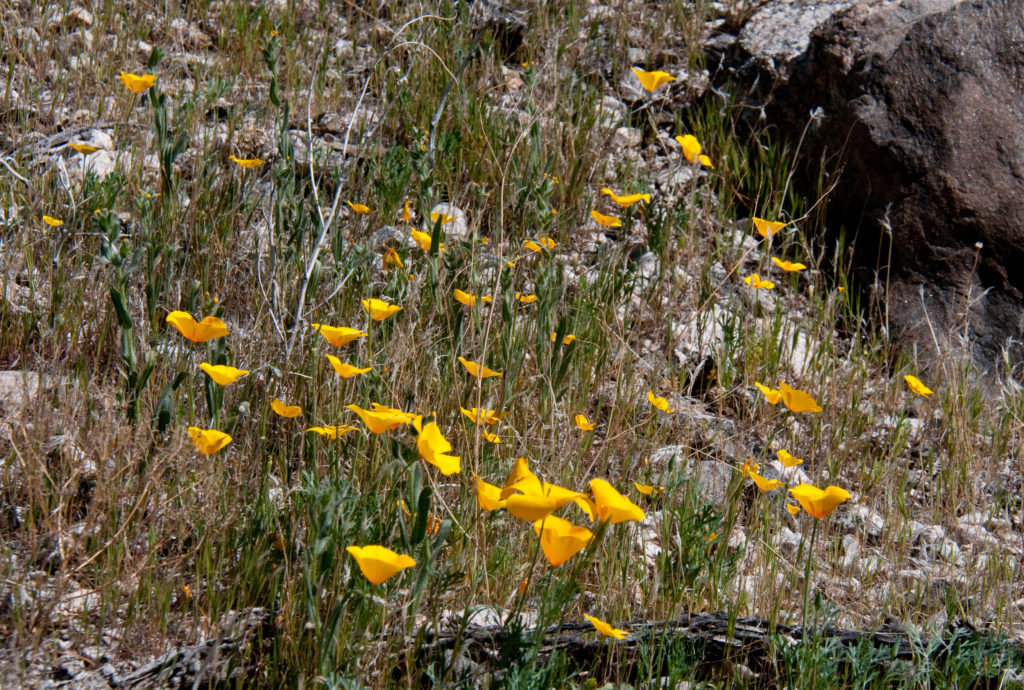 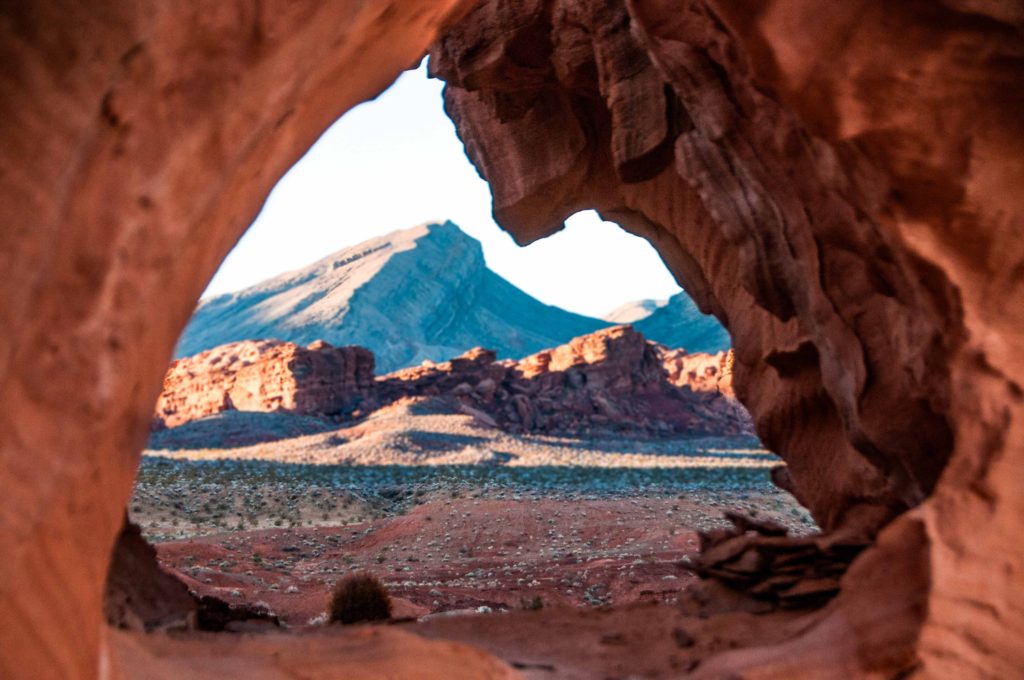 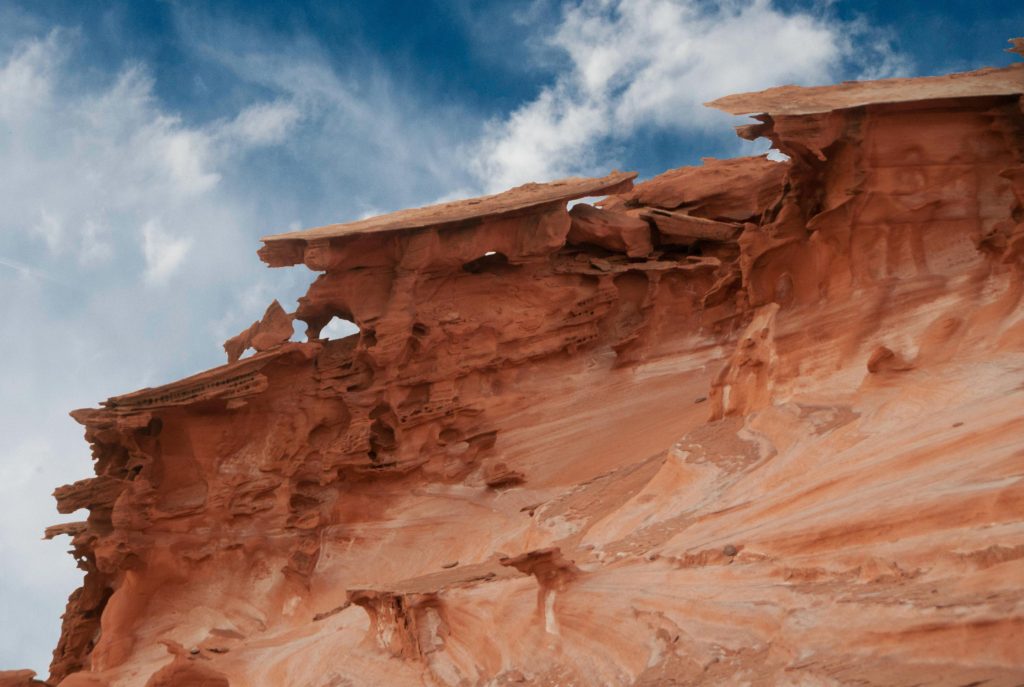 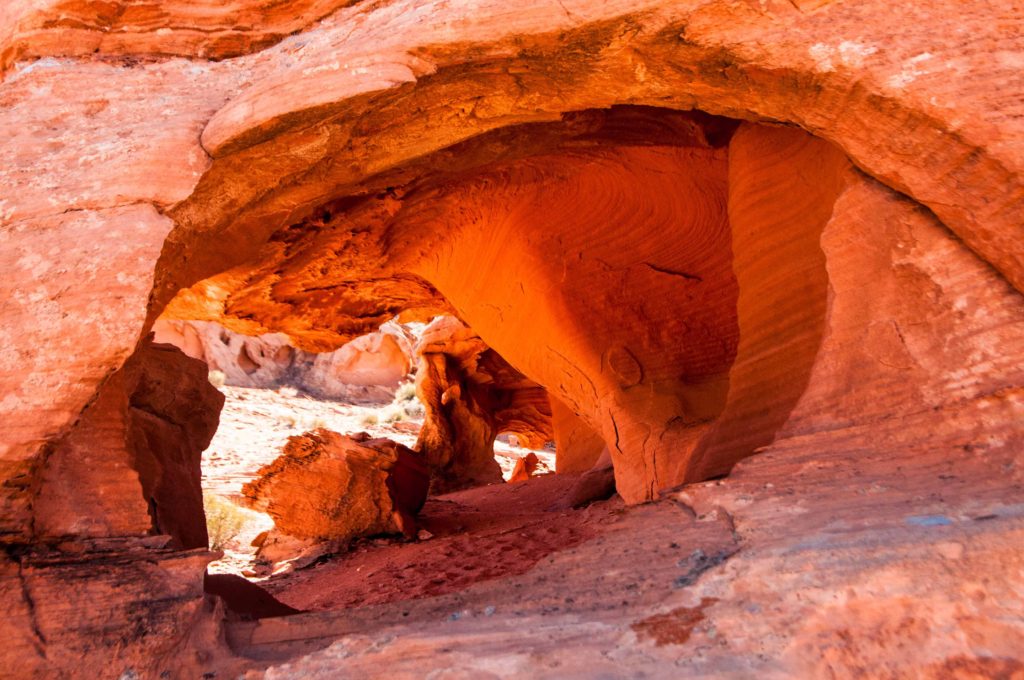 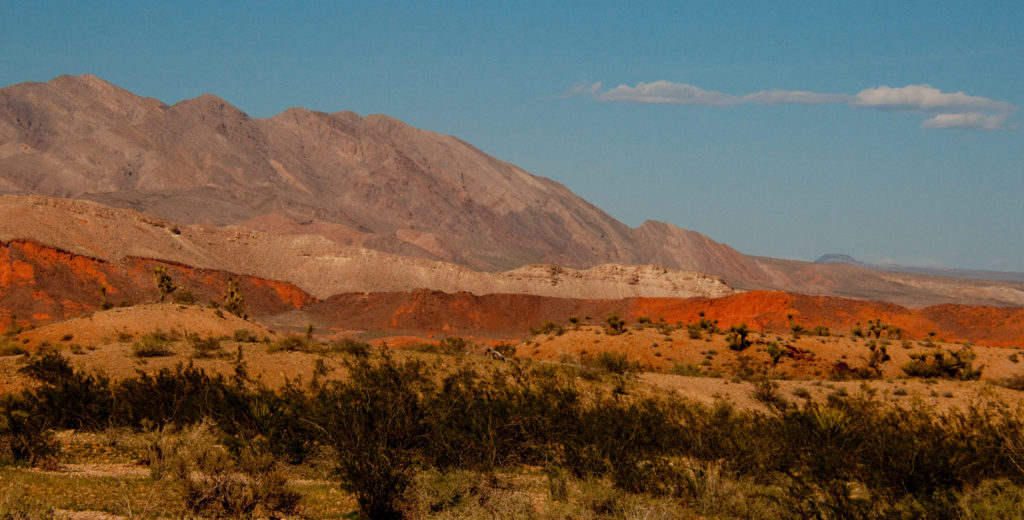 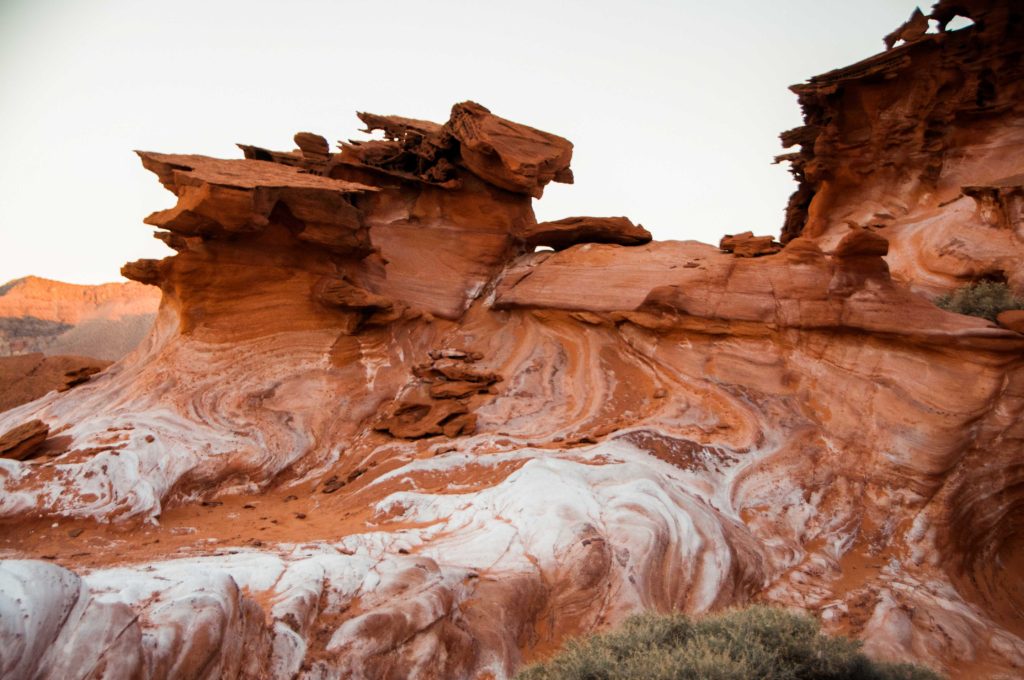 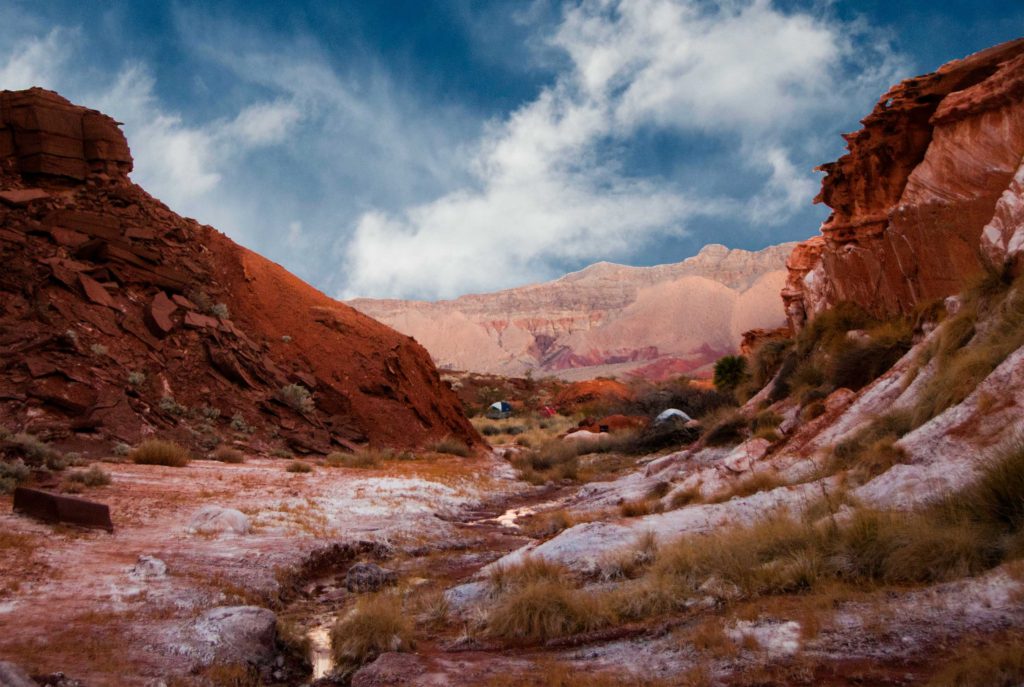 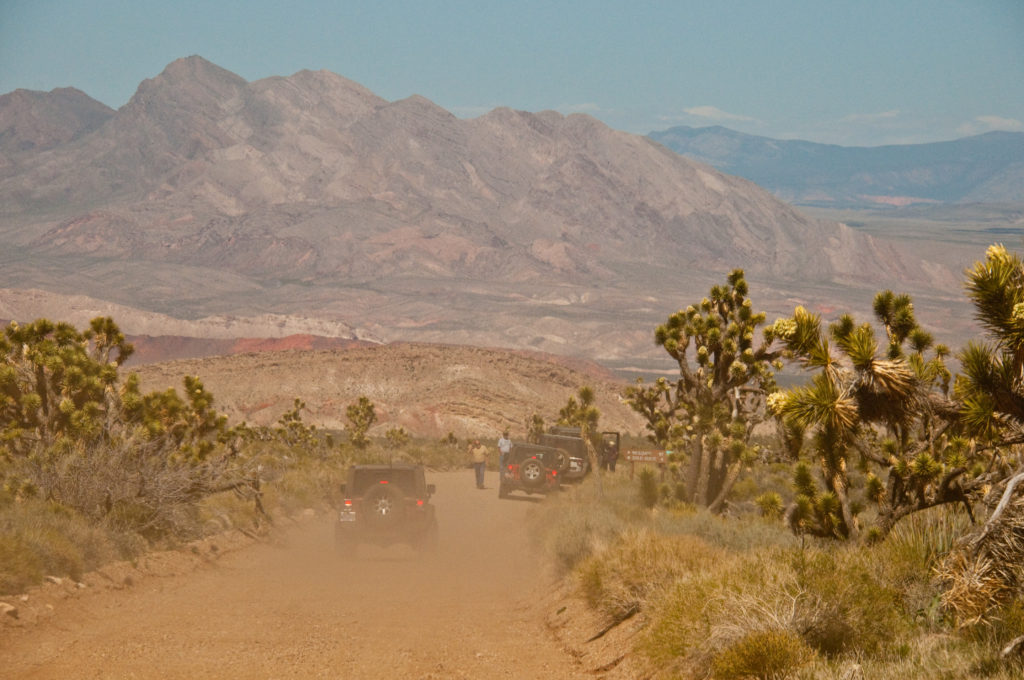 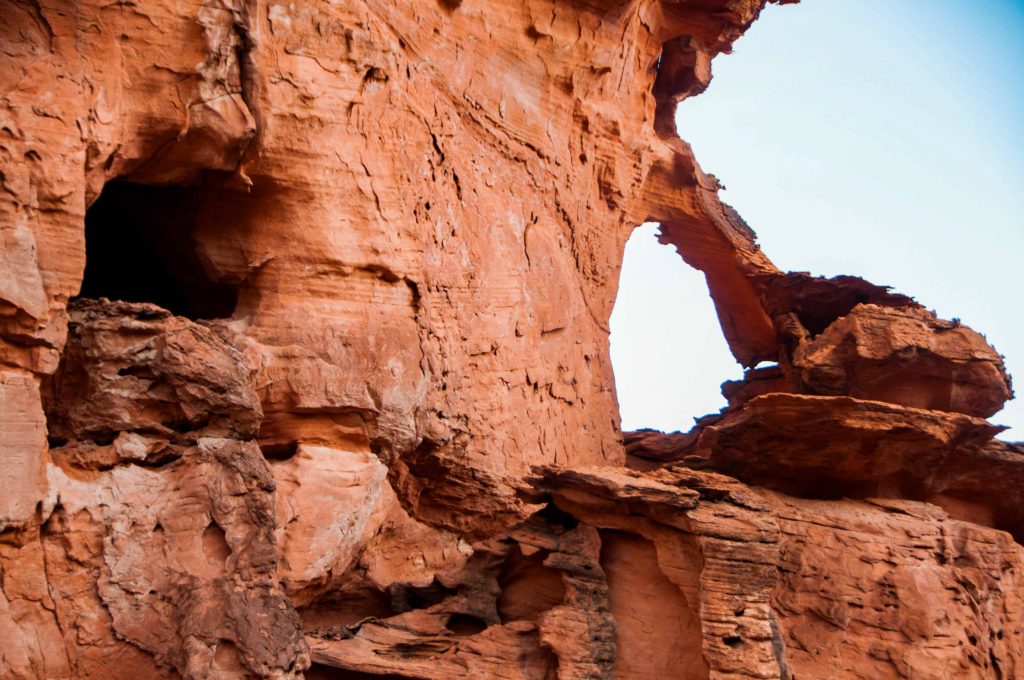 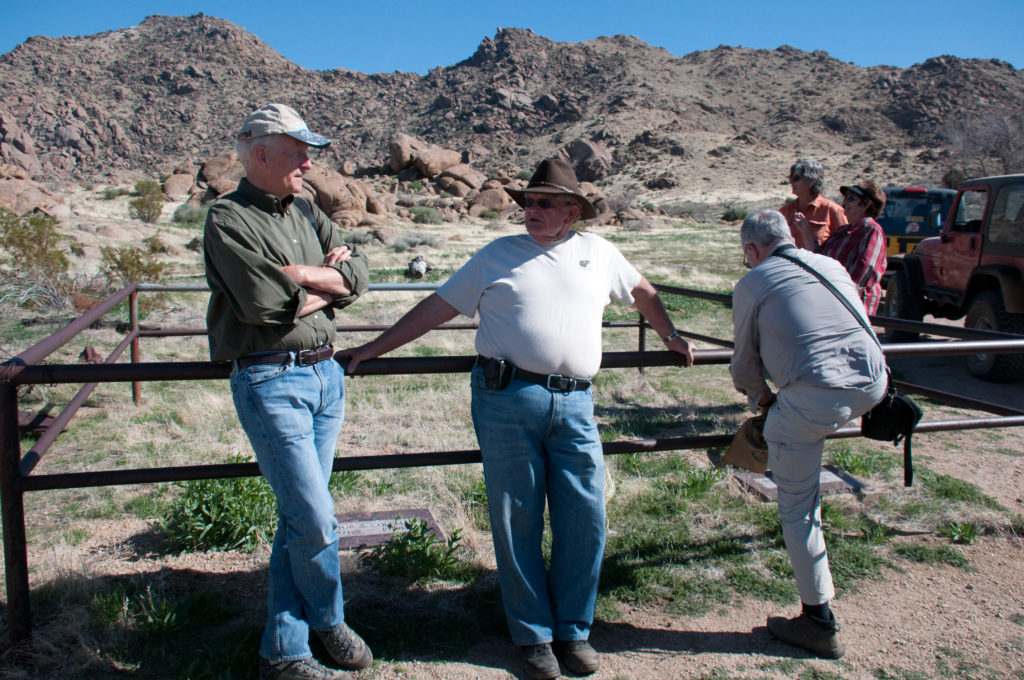 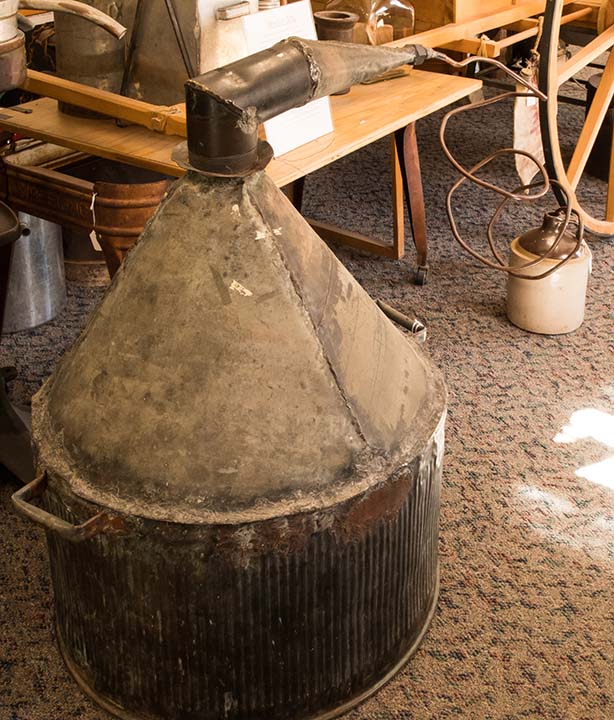 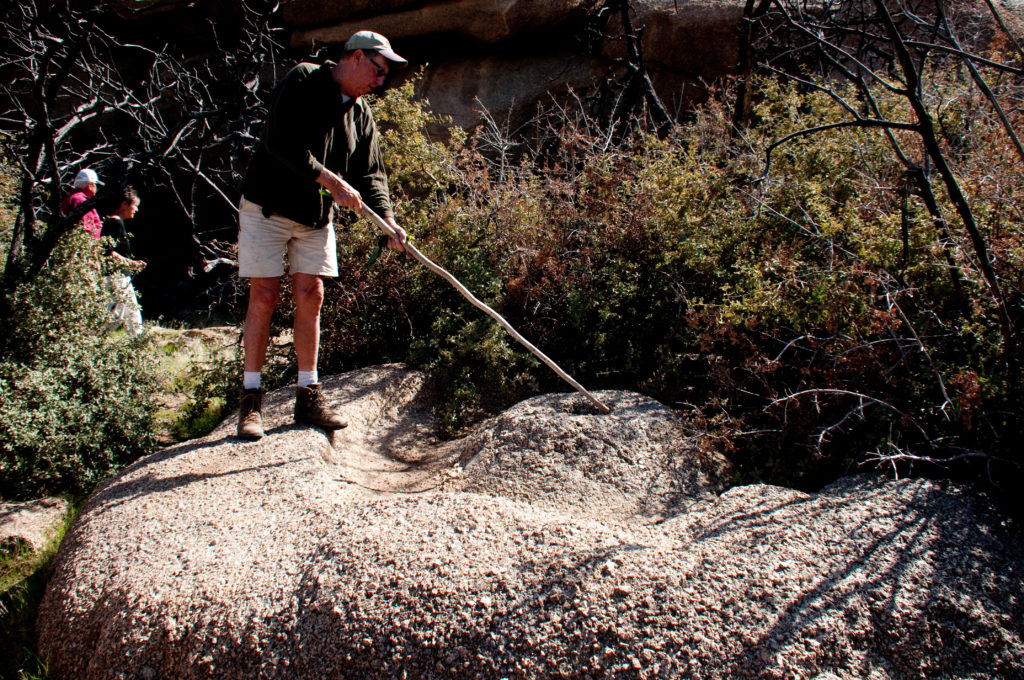 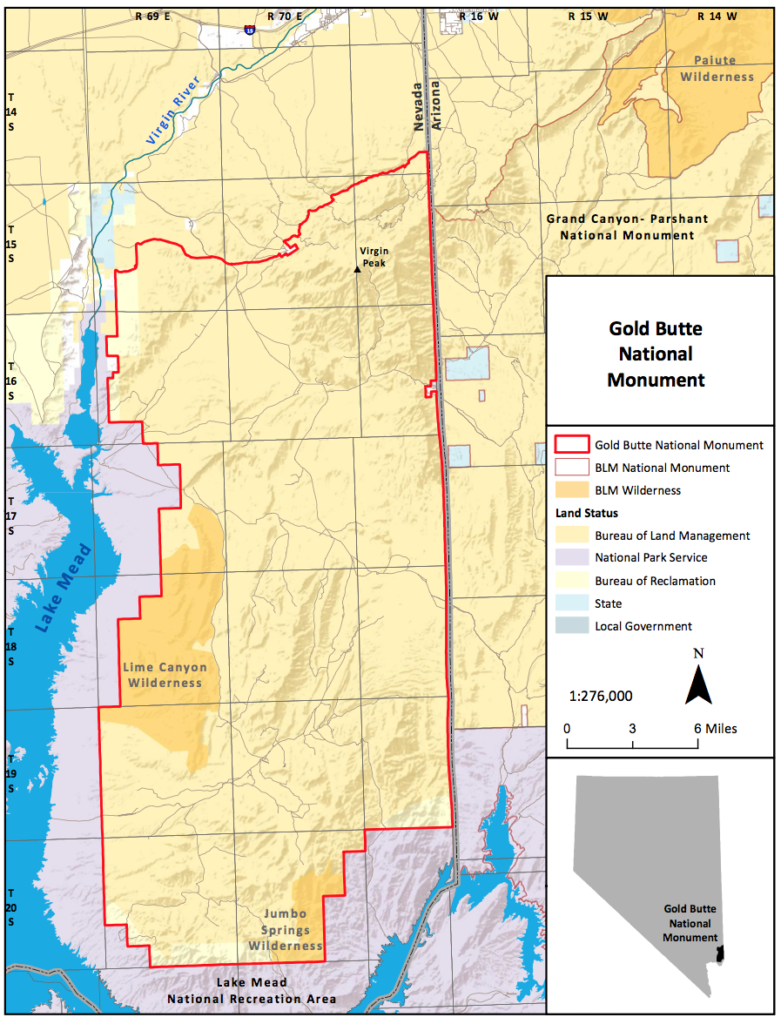