Jake Shepherd was killed in the line of duty in a plane crash. Chili's restaurants in Utah are sponsoring a fundraiser for Shepherd's family on Feb. 6, photo location and date unspecified | Photo courtesy of Jason Hansen, St. George News

UTAH — Two months after a fiery medical airplane crash in Elko, Nevada, claimed the lives of a critical care transport team and one patient, a restaurant chain will hold a fundraiser at each of its Utah locations, benefiting the family of a Utah flight paramedic killed in the crash and a GoFundMe fundraiser account has been created for the family as well.

According to officials, the American Medflight aircraft – headed to the University of Utah Hospital with a heart patient – had experienced mechanical problems shortly after taking off from Elko Regional Airport on Nov. 18, 2016.

The twin-engine plane had reportedly lost power and altitude before subsequently crashing into the parking lot of a mining company and catching several vehicles on fire, authorities said.

All four of the aircraft’s occupants were killed in the crash, including pilot Yuji Irie and patient Edward Clohesey, as well as Tiffany Urresti and Jake Shepherd, who were aboard as medical staff, according to a statement issued by the Elko Police Department.

At the time of his death, 24-year-old Shepherd had been working part-time as a paramedic for Mountain West Medical Center in Tooele. He had completed his certification as a critical care paramedic before becoming a flight paramedic, flying weekly with a critical care transport team.

Shepherd left behind his wife, Sadie Shepherd, and three children, ages 4, 2 and 1.

In an effort to help minimize the financial burden on Shepherd’s family as a result of his death, every Chili’s Grill & Bar restaurant in Utah will be participating in a Feb. 6 fundraiser between the hours of 11 a.m. and 10:30 p.m. See the flier attached to the bottom of this report.

Patrons wishing to participate must tell restaurant employees they are “there for Sadie” on the day of the event. In doing so, each restaurant will donate 15 percent of the event sales to Shepherd’s wife.

Jason Hansen, a neighbor of the Shepherd’s since 2015 and search and rescue volunteer in Cache County, initiated the family fundraiser with the restaurant chain.

“He was a guy that was always trying to help others,” Hansen said of Jake Shepherd.

Lydia McDonald, manager of Chili’s in St. George, confirmed both the St. George and Cedar City Chili’s locations will be participating in the fundraiser.

One donor posted the following message to the Shepherd family:

It is often hard to understand why we go through what we go through in life and why some are taken from us at such a young age. Jake was a special man and affected everyone around him with his Love of Life and Smile. Jake was one of those people who made everyone around him better and happier. To honor Jake and his spirit, we should all emulate his Joy and Kindness everyday of our lives. By living our lives smiling and full of love Jake will never be forgotten. He is not gone, just on to another adventure.

According to the page, Shepherd died “doing what he loved.”

Ed. note: St. George News has not verified information provided in connection with fundraising accounts mentioned in this article except as stated. St. George News does not assure monies deposited to fundraising accounts will be applied as described. Those considering contributions are advised to consult with their own professionals for tax advice and investment risks. 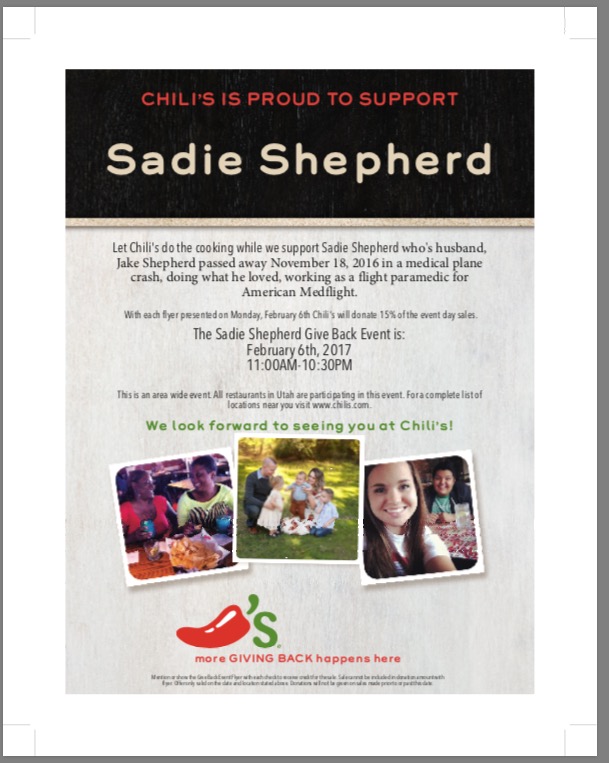