DISTRICT OF COLUMBIA — Sen. Orrin Hatch, R-Utah, the Chairman of the Senate Finance Committee, will deliver his first speech of the 115th Congress Thursday at 2:15 p.m. EST (12:15 p.m. MST) on one of his top priorities: repealing President Barack Obama’s health care law and replacing it with a patient-centered healthcare system that gives Americans access to quality, affordable care.

The Senate Finance Committee will play a leading role in healthcare reform, and in his remarks today, Hatch will outline the case for repeal, the transition period that will ensure stability for insurance markets and prevent immediate losses of coverage and the principles behind the replacement plan that will follow.

Click image below to be taken to the CSPAN live coverage. 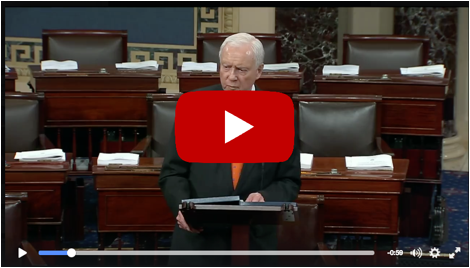 We understand that this will require first moving a budget resolution for fiscal year 2017 through Congress. While we recognize this budget resolution is primarily a mechanism to advance repeal, it should still contain transparent spending and revenue numbers and include all extant enforcement tools.

Prior to consideration of this “Obamacare Repeal Resolution,” we wish to affirm our shared commitment to the following process that will lead to the delivery of the following conservative priorities.

First, it is our belief that the 2017 budget resolution must include reconciliation instructions that enable Congress to quickly consider legislation that repeals at least as much of Obamacare as H.R.3762, which President Obama vetoed in December 2015.  Indeed, we should try to use the reconciliation process to repeal as many provisions of Obamacare as possible, especially the insurance mandates that are driving up health insurance costs for millions of Americans.

Second, we seek your commitment to passing a fiscal year 2018 budget resolution that sets our new, unified Republican federal government on a path to balance in 10 years without the use of budgetary gimmicks or tax increases.  Our votes in favor of the “Obamacare Repeal Resolution” do not indicate in any way our support for the revenue, spending, and deficit numbers therein, nor for the use of those numbers as the basis for future federal budgets.

We look forward to working with you this Congress and to delivering on the mandate given to us by the American people to repeal Obamacare and reform the status quo in Washington.

The letter was addressed to Majority Leader Mitch McConnell, R-Ky.; Majority Whip John Cornyn, R-Texas; and Budget Committee Chairman Mike Enzi, R-Wyo., and can be read in its entirety here.