COMMENTARY – I know, I know, Christmas was yesterday so I’m a day late. But if I had a nickel for every time I was a day late or a dollar short . . . I think you get the picture. So, without any further ado, I give you the 12 Ute Days of Christmas!

12. As some of you may already know, Bob & Doug McKenzie’s 12 Days of Christmas is one of my all-time favorite Christmas songs, and the inspiration for my own Ute list. Accordingly, in their honor, I salute the hosers from the Great White North who dot Utah’s rosters. Women’s basketball has three — Emily Potter, Paige Crozon and Daneesha Provo. The ski team has three — Martin Grasic, Sasha Zaitsoff and Roni Remme. Women’s soccer has two — Kristin Fairbairn and Natalie Kump. The swim team has two — Daniel Theriault and Genevieve Robertson. Women’s tennis has one — Jena Chang. Women’s volleyball has one — Lauren Sproule.

11. The Lady Utes have made an impressive clean sweep of their non-conference opposition, including wins over in-state foes BYU, Utah State, Weber State, Southern Utah and Utah Valley. The men’s team did play Utah Valley, but I would really like to see them take a tip from the ladies and play more of these in-state teams in their non-conference schedule. The Lady Utes open conference play this Friday on the road against 10th-ranked UCLA.

10. Kyle Whittingham has actually been at the helm of Utah’s football team 12 years, and has been coaching on The Hill since 1994 (but I had to put him here in order to make the other days work). I have heard some naysayers complain that, similar to Ron McBride, he has hit his ceiling as evidenced by the annual slide of the team in November. I have to admit I have even wondered myself, at times, if he will ever get over the hump in the Pac-12 and at least get the Utes into the Pac-12 title game. However, for every Urban Meyer hire (Dr. Chris Hill’s walk-off home run), there are multiple hires like Ray Giacoletti and Jim Boylen that end up setting a program back for years instead of moving it forward. Unless I am guaranteed a top-shelf coach who will bring home a Pac-12 title within his first three years (which I honestly don’t think can be guaranteed), I am content to have Whittingham coach on The Hill for as long as he wants to do so.

9. Speaking of Kyle Whittingham, he has an absolutely insane bowl record at 9-1 (the best winning percentage in college football history). That number should get even crazier as I fully expect Utah to steamroll Indiana in the Foster Farms Bowl on Wednesday, kicking off at 6:30 p.m. MT on Fox.

8. The women’s soccer team finished with the second-highest ranking in school history at No. 16 in the final National Soccer Coaches Association of America rankings (behind only a No. 11 ranking in 2006). These gals were simply over the top, winning 13 games and two players — Hailey Skolmoski and Tavia Leachman —garnering NSCAA All-Region honors (and a third, Katie Rogers, joining them as an All Pac-12 performer).

7. After winning 20 matches for the third time in four years, the women’s volleyball team made its 13th NCAA Championship appearance this season.

6. The move to the Pac-12 was hands down a fantastic move for Utah. I would rather be competitive in a Power-5 conference, than dominate a lesser conference (or wallow in independence).

5. Yes! This one actually works, as five players do indeed play at a time in basketball. As much as I have tried to convince myself otherwise, this is indeed a rebuilding year for the 9-3 Runnin’ Utes. In fact, only five of the current players were even on the roster last year. The good news is that Lorenzo Bonham is the only senior on the squad. They should still be entertaining to watch this season, but much improved next season.

4. There are obviously more than four baseball players on a team, or even playing on the field at any given time, but I had to fit them in somewhere. In May of 2016, the baseball team won the Pac-12 Championship outright and earned a bid to the NCAA regional for the first time since Utah won the Mountain West Conference Tournament in 2009.

3. Mitch Wishnowsky won the Ray Guy Award as the nation’s top punter and also became only the third unanimous consensus All-American in school history. Add his Ray Guy to the back-to-back Ray Guy Awards won by Tom Hackett, and a Utah kicker has taken the Ray Guy home three straight years. Utah joins Penn State (Bednarik Award, 2005-07) and Nebraska (Outland Trophy, 1981-83) as the only schools that have claimed one of the awards sponsored by the National College Football Awards Association for three straight years (and the only school to do so with Aussies). Wishnowsky is only a sophomore, so there remains the possibility of an unprecedented four (dare I say five?) year sweep.

2. The Red Rocks never fail to amuse and amaze their fans, especially at home, and I have no reason to believe that this season is going to be any different. Although the media picked them to finish second in the Pac-12, and start the season ranked sixth nationally, they will always be number one in my heart. The Red Rocks begin their season with a bang hosting No. 7-ranked Michigan on The Hill on Saturday, Jan. 7, at 5 p.m.

1. Now don’t get me wrong, I love Swoop (and my personalized Utah license plates even bear the moniker SWOOP — I still can’t believe the plate was available years ago when I swooped it up), but I miss the days of having a Ute in traditional dress ride a horse out onto the football field before the games. At least we still get to have Ute nation grace our football field and basketball court once a year for the annual Ute Proud games, and I am just sad we do not feel their presence on campus on a more regular basis. 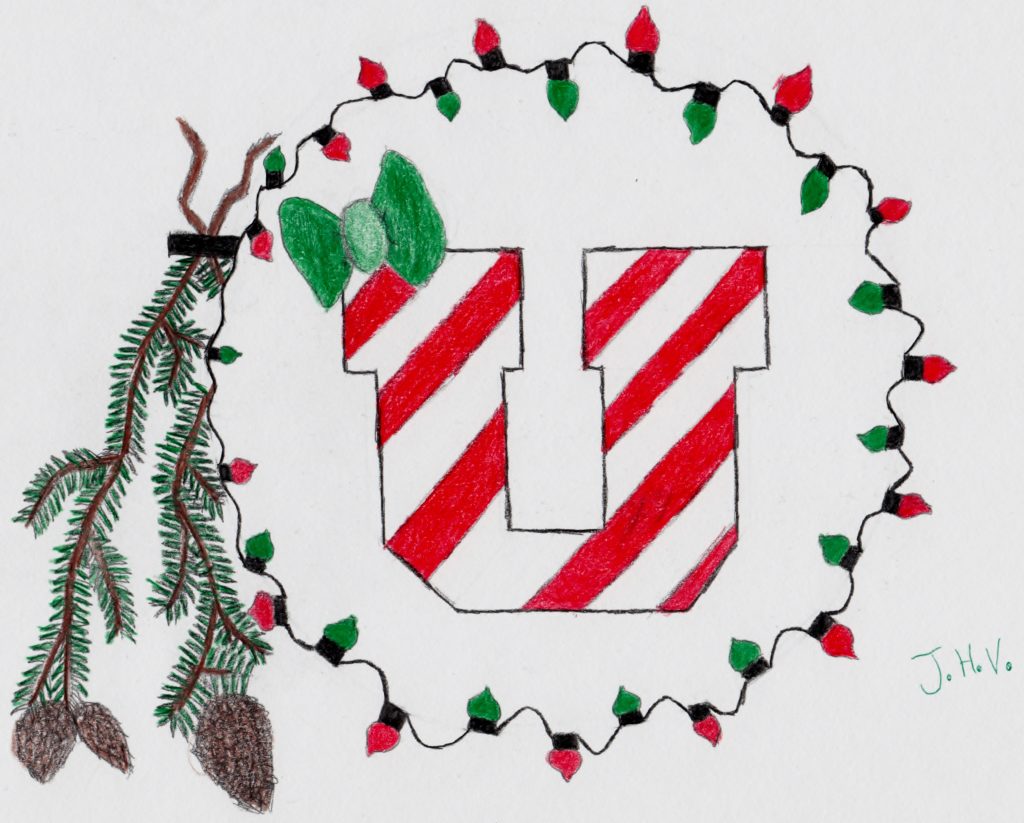