SAN DIEGO (AP) — On a rare wet and rainy night at Qualcomm Stadium, BYU capped off its 2016 season with a wild 24-21 win over Wyoming in the 2016 San Diego County Credit Union Poinsettia Bowl on Wednesday.

BYU (9-4) led 24-7 in the fourth quarter, but a furious Cowboy (8-6) comeback made it a thriller in the final minutes. Wyoming cut the advantage to 24-21 and had the ball at the Cougar 32-yard line with 1:22 to play before senior Kai Nacua picked off a pass heading near the end zone to end the final threat of a comeback.

The win was BYU’s first bowl win since its last trip to the Poinsettia Bowl in 2012 when the Cougars defeated San Diego State 23-6.

Senior running back Jamaal Williams put on a show in his final game at BYU, running for 210 yards and one touchdown on 26 carries. He finished his career with the most rushing yards in school history with 3,901 and the most games of 100 rushing yards or more with 16. He scored a TD in the game, just like he did in the 2012 Poinsettia Bowl.

“It felt like almost the same because I scored in both of them,” Williams said. “It just brings back a whole bunch of memories, and in the same end zone, too.”

Nacua’s interception was his sixth of the year and 14th of his career. Dayan Lake also had a takeaway, giving BYU 21 interceptions in 2016, tied for No. 2 nationally after the game. Harvey Langi led the team with 16 tackles, a career high, while Butch Pau’u and Fred Warner had 11 and 10 tackles, respectively.

Wyoming’s punter fumbled the snap near the end of the first quarter at the Cowboy 3-yard line. Quarterback Tanner Mangum scrambled and punched it in for a rushing score to put BYU up 7-0 with 38 seconds to play after a slow and soggy first quarter.

Mangum threw an interception on the next Cougar possession and Wyoming ran it back to the BYU 39-yard line. The Cougar defense forced a field goal attempt and a fake was snuffed out as Langi batted down a pass attempt. BYU took over at its own 25-yard line midway through the second frame.

BYU was able to get three points on the next possession at the 3:08 mark in the second quarter with a 27-yard field goal from Rhett Almond. The Cougars took a 10-0 lead into halftime.

Out of the break, Wyoming went 60 yards on its first drive, capped by a 4-yard touchdown run to cut BYU’s lead to 10-7 after a drive over eight minutes long.

BYU answered in its first possession of the half. Mangum completed 4 of 5 passes on the drive, capped off with a completion on a desperation throw on to the end zone that bounced off of multiple players’ hands before falling into Tanner Balderree’s arms for a 5-yard touchdown. Nick Kurtz had a 39-yard reception to set up the score. With 2:42 left in the third quarter, BYU had a 17-7 lead.

On the first play following a targeting call that ejected defensive back Micah Hannemann near the end of the third quarter, Lake stepped in front of a pass and intercepted it for his third pick of the year, returning it 14 yards to the BYU 45-yard line. The Cougars cashed in five plays later when a Jonah Trinnaman block helped spring Williams for a 36-yard touchdown scamper to make it 24-7 less than a minute into the fourth quarter.

“Honestly it was just great offensive line blocking and the tight ends and Jonah. Jonah is the man,” Williams said. “That man had the best block in the world. I wanted to celebrate right there before I even scored.”

The back and forth scoring continued when Wyoming made it 24-14 after a 9-yard touchdown pass with 7:35 left in the game.

The Cowboys continued to fight with another touchdown from Wyoming wide receiver Tanner Gentry (his second of the game) with 2:11 to go to make things interesting at 24-21.

BYU failed to convert on the next drive and had to punt it back to Wyoming with 1:52 remaining. The Cowboys took over at midfield.

After getting to the 32-yard line, Wyoming’s quarterback tried to extend the play and threw across his body for the end zone, but Nacua jumped in front and picked it off to seal BYU’s victory.

BYU finishes the season 9-4 with a bowl victory in head coach Kalani Sitake’s first season at the helm.

Tackling teamwork
For the first time since 2013 against Boise State, BYU had three players with double-digit tackles. Harvey Langi had 16, Fred Warner had 10 and Butch Pau’u had 11.

Wyoming streak
This was the eighth-straight win BYU has had over Wyoming. In the first contest since 2010, the Cougars increase their series record to 45-30-3 over the Cowboys.

Jamaal Williams
Williams ran for his second-highest output this season with 210 yards to go with his one touchdown for the Poinsettia Bowl offensive MVP. This was the sixth game of the season and 16th game of his career rushing over 100 yards and his third with over 200 yards. He has the most 100-yard games in school history. It was also a career high for rushing yards in a bowl game for Williams, surpassing his previous high of 31 yards, which he had in both of his two previous bowl games.

Williams moved his way up the record books, putting himself in ties for fifth in total career touchdowns (36) and third in career rushing touchdowns (35). He also moved into fourth in career all-purpose yards (4,468). Williams 210-yard outing is a BYU bowl game record, surpassing Taysom Hill’s 133 against Washington in the 2013 Fight Hunger Bowl. That ups his career bowl rush yards total to 272, also breaking Harvey Unga’s BYU career rushing yards in a bowl game (163).

Harvey Langi
In his last game as a Cougar, Langi notched a career high in total tackles with 16. He was also named the 2016 Poinsettia Bowl Defensive Player of the Game. He also notched a tackle for loss and a pass breakup.

Kai Nacua
Nacua grabbed his sixth interception of the year, tying his career high. He finishes his career at BYU with 14 interceptions, the most at BYU since official defensive statistics were recorded by the NCAA and tied with Derwin Gray for No. 4 overall at BYU.

Tanner Mangum
In his first start of the season, the sophomore quarterback completed 8 of 15 passes for 96 yards, one touchdown and an interception. With 38 seconds left in the first quarter, Mangum rushed 3 yards for his first rushing touchdown of the season and third of his career.

Dayan Lake
The freshman defensive back grabbed his third interception of the season and surpassed 100 interception return yards (113). He is the second player in two seasons to do so with Kai Nacua notching 137 yards in 2015. He finished with four tackles and a pass breakup to go with the pick.

Fred Warner
Finishing with 10 tackles, this was Warner’s second game of his career with double-digit tackles, both games coming this season (14 vs. West Virginia). With 1.5 tackles for loss, the junior linebacker has notched a tackle for loss in nine of 13 games this season.

Tanner Balderree
After the ball was tipped around in the end zone, Balderree caught his second career touchdown with 2:42 left in the third quarter. That was his lone catch of the game. 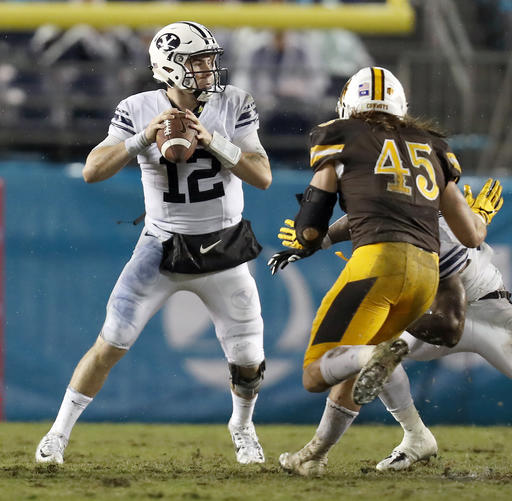 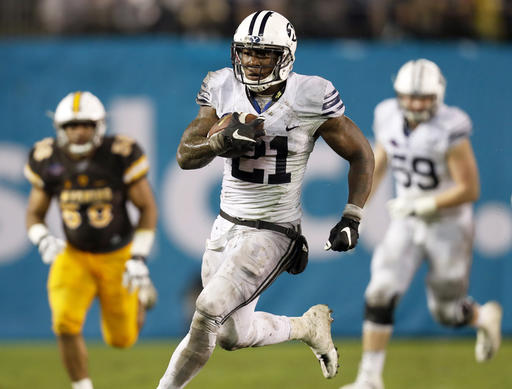 BYU running back Jamaal Williams runs on the way to a touchdown against Wyoming during the second half of the Poinsettia Bowl NCAA college football game Wednesday, Dec. 21, 2016, in San Diego. (AP Photo/Ryan Kang) 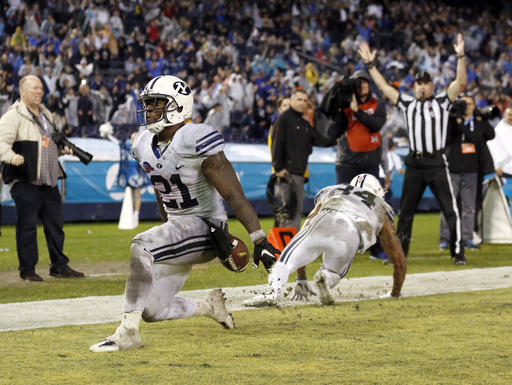 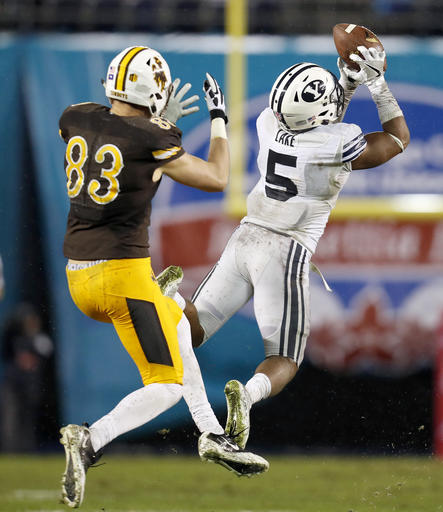 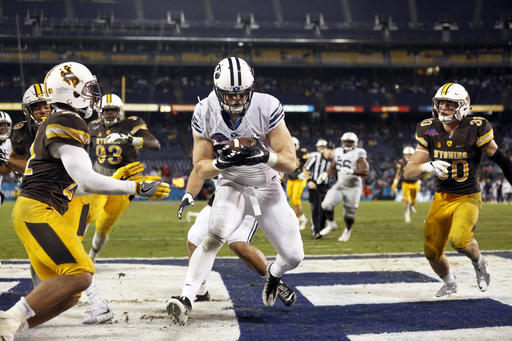 BYU tight end Tanner Balderree, center, catches the ball in the end zone for a touchdown against Wyoming during the second half of the Poinsettia Bowl NCAA college football game Wednesday, Dec. 21, 2016, in San Diego. (AP Photo/Ryan Kang) 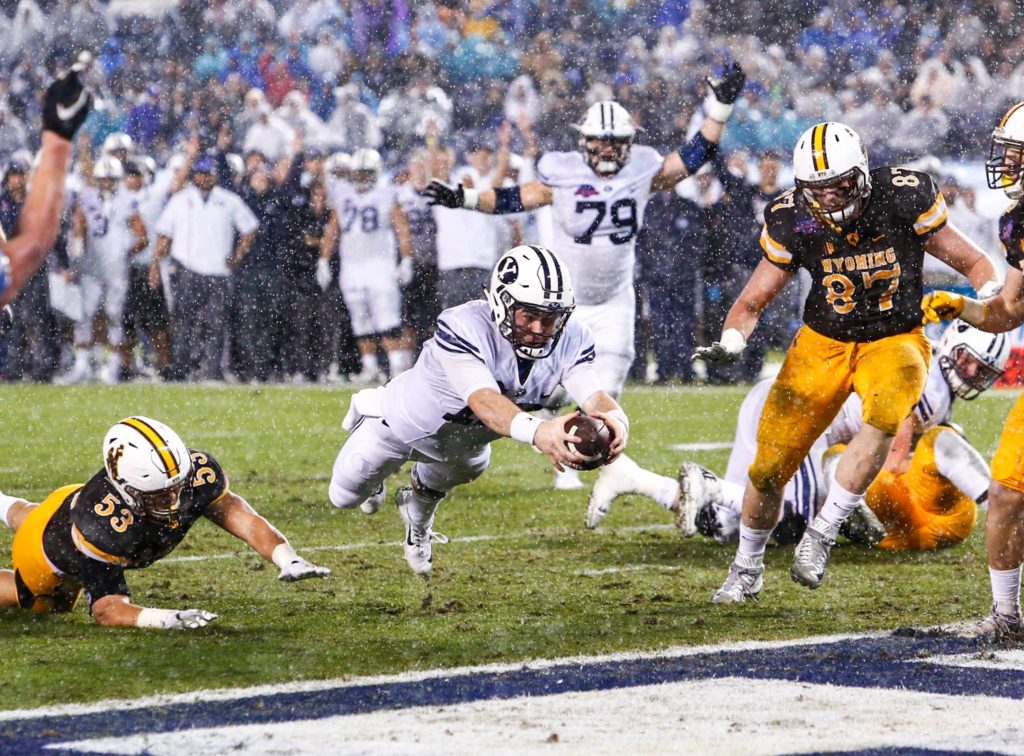 Hall, Langi star as BYU overwhelms UMass for win No. 7

Win No. 6 for BYU comes at expense of SUU T-Birds