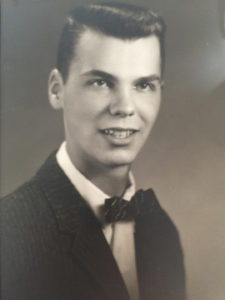 Bob was raised in Guthrie, Oklahoma, and enjoyed waterskiing with his brother, Richard, after working in his dad’s Studebaker shop fixing cars. He served as a member of his high school ROTC where he learned to shoot cannons and rifles.

His education included a Bachelor’s degree from Northwestern University Technological Institute where he graduated third in his class. Bob continued his education at Cornell University in Ithaca, New York. where he received a Ph.D. in physics and their two sons, Scott and Brett were born.

His employment began when he was hired by Sandia Labs in Albuquerque New Mexico, to be a research scientist. Then he worked for Varian industries in Palo Alto California. The move to Minneapolis was the next career destination, working for Physical Electronics in Minnetonka, Minnesota.  It was in Minneapolis that his two daughters, Avalie Lynn and Cheri Louise, were born.   His final career move was to Portland, Oregon, where Bob worked for FEI Co.  During his career, Bob received 24 United States Patents for his work inventing the Scanning Electron Microscope and work in Auger Spectroscopy.

Bob traveled extensively around the world with his work visiting over 20 foreign countries.  His gentle, quiet nature was appreciated by all who met him.

He is preceded in death by his parents and his brother, Charles Richard Gerlach, of Pleasanton, Texas.

In lieu of flowers, donations may be made to The Church of Jesus Christ of Latter-day Saints missionary fund.

Arrangements are made under the direction of Spilsbury Mortuary, St. George, UT, 435-673–2454. Friends and family are invited to sign Robert’s guestbook at www.spilsburymortuary.com.