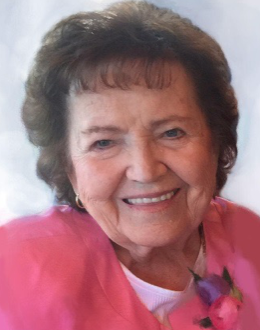 June 8 became a special day in the life of Vonda Gay Ivory Larson and her family. In 1929 it was the day of her birth, born to Ellis Clark and Erma Nielsen Ivory in Fountain Green, Utah.

Just 17 years later in 1946, June 8 was the day she married her childhood sweetheart, Harris Dean Larson. Amazingly enough, June 8 would also become the day that two of her seven children and a granddaughter were born. As one could imagine, the 8th of June became an all-purpose and all-involving celebration every year.

Vonda passed away Dec. 11, 2016, at the age of 87 after a brief illness and hospitalization. With the help of Dixie Hospice Care, she was able to return to the home she loved and was surrounded by most of her children and grandchildren until passing peacefully to join her beloved eternal companion, Dean. The sadness and sting of losing her is greatly softened by the image of Vonda and Dean, sweethearts since the age of 6, once again reunited.

Vonda and her young family moved to St. George in 1969, where her father and brother were the original developers of a new community known as Bloomington. She and Dean became an integral part of shaping Bloomington into what it has now become. Vonda served her community with vigor as an organizer for Jubilee of Trees, Utah State PTA, Daughters of the Utah Pioneers and the American Cancer Society. At the Mayor’s request, she served as an organizer for St. George Heritage Days for many years. Some of her most dear friendships were developed because of her involvement in the Literary Arts Club and the Washington County Fair board.

She was visited, almost daily, by her children and grandchildren and would always want to play a game before they left. No one ever left her home without a hug. Grandma never forgot a birthday and would always have a card with a little gift for everyone. She was driven to organize family parties and reunions, knowing the importance of gathering family members for affectionate re-acquaintance. All of her many grandchildren know and love each other because of her consistent efforts. No one was ever to be lost or left behind on her watch. Whether you were family or friend, you were enthusiastically welcomed into her home on any occasion and she was sincerely saddened if any of her family were hurting or troubled.

Vonda was an active member of the LDS Church throughout her life, serving in many roles but always with exceptional dedication to the people she served. Many were blessed by her kind and giving efforts.

Coming from a family tradition of loving service to others, she leaves her posterity and their families to continue what she and Dean began. She is survived by their seven children: Linda (Richard) Prince, Carl (Kalynn) Larson, Larry (Jeri) Larson, Diane (Bob) Prince, John (Jennifer) Larson, Sheila (Dennis) Traveller, and Wendy (David) Hemingway; 30 grandchildren and 77 great-grandchildren (a number that increases monthly). She will be greatly missed by her siblings George (Jenille) Ivory, Ellis (Katie) Ivory, and Mary (Jerry) Pelk. She is preceded in death by her beloved husband Dean, a brother, Cameron, a son-in-law, Stephen Flegal and a grandson, David Flegal. Numerous dear friends and family remain who will keep her memory and traditions alive as we celebrate her extraordinary life.

The family wishes to express gratitude to the wonderful friends at Dixie Dialysis for their kind and professional care.