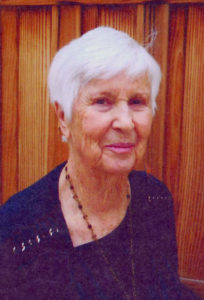 Bernis Margaret Connelly Mihlberger Moore, 91, beloved mother, grandmother, great-grandmother, sister, aunt and friend passed away Dec. 3, 2016. She was born July 31, 1925, in Levan, Utah, to Esther Eliza Gardner and George Graham Connelly. She married William Carl “Bill” Mihlberger on Aug. 2, 1945, in Salt Lake City, Utah. Their marriage was solemnized in the Salt Lake Temple of The Church of Jesus Christ of Latter-day Saints on Jan. 26, 1949. Together they raised two sons and two daughters. They were married for 56 wonderful years until Bill’s passing in 2001.

Bernis later married Howard Dan Moore on Jan. 4, 2004. Dan and Bernis shared the companionship of one another for eight very special years until Dan’s passing in 2012.

Bernis loved the outdoors and enjoyed spending time with family and friends boating and at their cabin in Brighton. She traveled all over the world with her husband Bill. They also loved getting together with friends and traveling with a motorhome group during her and Bill’s retirement. She was an avid reader until her eyesight became bad and then she enjoyed listening to books on tape.

She was  a member of The Church of Jesus Christ of Latter-day Saints, where she served in church leadership and teaching positions in Relief Society, Young Women’s and Primary.

The family wishes to extend their heartfelt gratitude to Applegate Hospice for the care, kindness and compassion given to Bernis and to her friends at The Retreat at Sunbrook who made her last year extra special. She will miss her special friendships with all of you.

In lieu of flowers, the family suggests donations be made to a charity of your choice.