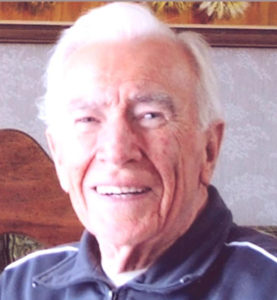 Irwin Bailie, 98, passed away comfortably at his home in Ivins, Utah, Thursday, Nov. 24, 2016. He was born Feb. 4, 1918, in Spokane, Washington, to Elbert Levi and Olga Holda Burmaster Bailie and was the oldest of three children.

Irwin was a pilot for the Army Air Corp during World War II. After completing single engine training in California, he transferred to Salt Lake City to learn twin-engine transports.

During that time, he met Dorothy Helen Prusse of Provo, Utah. They were married on Oct. 11, 1944.

Irwin made his career in the United States Air Force, where he retired as a full colonel after 23 years.

He earned a Doctorate Degree in Psychology from the University of Omaha, Nebraska, and worked for the Provo School District as a counselor for 12 years.

He will be remembered for being a loving and supportive husband, father and friend. He embodied all the qualities that inspired others to be better people, both to themselves as well as their family and friends. His knowledge and insight on life were an inspiration to all that knew him. He will be greatly missed.

Irwin was preceded in death by his loving companion, Dorothy, his parents and his sister, Eleanor Liston.

He is survived by two children: Karla (Roger) Mosley of Wasilla, Alaska, and Robert (Linda) of Springville, Utah; seven grandchildren; 14 great-grandchildren and his brother Ronald of Seattle, Washington.

Arrangements entrusted to the care of Metcalf Mortuary, 435-673-4221. For condolences, full obituary and funeral listings, please visit our website www.metcalfmortuary.com.

Utah’s coronavirus fatality rate is the lowest in the nation at 0.74%