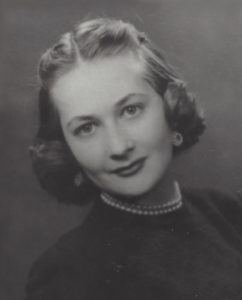 Joy was an active member of the LDS church. She was Relief Society president in the Garden Park Ward (Salt Lake City) from 1979 to 1981 and in the Laguna Beach Ward (California) from 1990 to 1992. Joy and Howard served together as full-time missionaries at the Salt Lake Conference Center from 2000 to 2002.

Joy was an avid reader and gifted interior designer. She taught gourmet cooking classes in her Salt Lake City home for many years. Her family always anticipated and enjoyed her traditional Danish food and treats during the holidays. Joy opened the Consignment Company on 9th Avenue in Salt Lake City in April of 1979, which is still in operation today.

Mom – we will miss you dearly but are comforted to know that you are now with Dad. God be with you till we meet again.

Special thanks go to Beehive Homes and their staff for their great care and service to Mom over the past 4 1/2 years and to Applegate Home and Hospice for their service as well over the past year.

Arrangements are under the direction of Spilsbury Mortuary, St. George, Utah, 435-673-2454. Family and friends are invited to sign her online guestbook at www.spilsburymortuary.com .