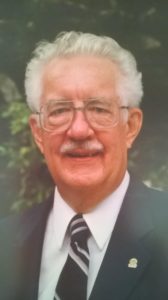 Harold Karl Monson died Nov. 18, 2016, in Salt Lake City, Utah. He was 93. Harold was born Oct. 20, 1923, in Provo, Utah, the only child of Karl Henry Monson and Elvira Andersen Monson. He was proud of his Norwegian and Danish heritage.

After graduating from Provo High School, he earned a degree from Rocky Mountain School of Photography. He enlisted in the U.S. Marine Corp and served in World War II, spending most of his time at the Solomon Islands and New Caledonia.

He returned to Provo and met Dora Goulding, whose family had moved from Henrieville to Orem. They married on July 13, 1945, solemnized two years later in the Manti Temple of The Church of Jesus Christ of Latter-day Saints. They raised four children and were married for 64 years. Dora passed away in 2009.

Harold was a photographer and worked for the Deseret News, Salt Lake Tribune and Provo Daily Herald. He was the manager of the BYU Photo Lab for several years and was head of Medical Photography at LDS Hospital in Salt Lake City.

Harold and Dora lived in Egypt twice. In the early 1980s, he was hired by Project Hope to go to Alexandria, Egypt, to establish a medical photo lab. Dora taught English at the American Cultural Center. Then from 1987-1989, they returned to Cairo, Egypt, as special ambassadors of the LDS church.

Harold had the distinction of having connections to all five branches of the military: as a Marine in WWII, in the Navy during the Korean War, a short stint in the Coast Guard Reserves, as a civilian employee for several years with the U.S. Army at Dugway Proving Ground, Utah, then 22 years in the Air Force Reserve retiring as a Master Sergeant.

In 1991, Harold and Dora moved to St. George to enjoy the sunshine. They loved their time in Dixie, serving as head of the Cotton Mission Chapter of the Sons/Daughters of the Utah Pioneers. He portrayed Judge John M. Macfarlane for “St. George Live” for nine years.

Harold was a High Priest in The Church of Jesus Christ of Latter-day Saints, serving in many priesthood assignments, including several bishoprics, branch president, high councilor, in a stake presidency and as a stake clerk.

One of his greatest loves was music. He was a fine pianist and organist and had a beautiful tenor voice. He sang in several notable choirs including the Mendelssohn Men’s Choir and the Jay Welch Chorale.

The family thanks the many neighbors, ward members, friends and relatives who helped watch over dad. Your generosity and compassionate service meant so much to him. May you be blessed for your kindness. Special thanks to Don and Jim at Bloomington Knolls.

Thanks, Dad, for everything. We love you!