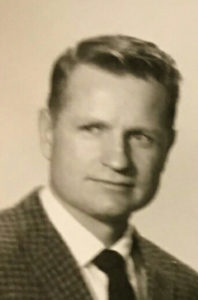 He grew up in Cedar City and graduated from Cedar High School in 1945 where he starred in football and basketball. Even before graduating he volunteered for the Navy, after which he shipped to the Pacific and served honorably for a year on a troop ship bringing weary soldiers home. After returning home himself, he worked for a time again with his father herding sheep.

In 1953 Pace married Virginia Clark and they had four children; Ginger, Clark, Rex and Paul. They were married for 15 years.

He married Lucy Ruesch and was blessed to add Holly and Tyler to his family. They were married 44 years, until Lucy’s death.

Pace loved his siblings Don Ray, JN, Jolene and Sandy. He especially loved Kanarra mountain and spent summers, Labor days, Veterans days, deer hunts and any other excuse for a holiday at the cabin with Lucy or other family members.

He worked several jobs in his life: the Dugway proving grounds in Tooele, Utah, then later at Area 51 in Nevada. For several years, he worked for his uncle, Lou Webster, at the Webster Coal Mine in Cedar Canyon, then road construction in both Utah and Nevada operating heavy equipment. In 1967 he began working with his best friend, Claron Bradshaw. He worked at St George Ford for 25 years.

Pace missed few mornings having coffee with his friends, attending as recently as a few days ago. He loved a good conversation.