ST. GEORGE — A driver possibly distracted by her young passengers set off a three-car collision on S. Mall Drive in heavy Thursday morning traffic when she failed to brake in time for a line of cars stopped at a red light. Minor injuries were reported, and driver was cited.

Just before 9 a.m., a call came into the St. George Communications Center reporting a three-car crash on S. Mall Drive across from Lin’s Marketplace. When officers and emergency personnel responded, they found three damaged vehicles, two of which were blocking the northbound lane.

After checking all vehicle occupants, two of which reported minor injuries but declined transport, officers began piecing together the events that led up to the three-car pile up, St. George Police officer Andy Mickelson said.

After speaking with the drivers and witnesses at the scene, officers determined that a charcoal Chrysler minivan was heading north on S. Mall Drive during heavy morning traffic, and as the woman driving the minivan passed Lin’s Marketplace, a line of cars started backing up from the intersection at E. Riverside Drive.

As the driver of the minivan approached the line of waiting cars, she was unable to brake in time to avoid a collision and struck a white Lexus four-door passenger car stopped behind numerous other vehicles waiting for the light.

The man driving the Lexus looked in his rear view mirror to see the minivan approaching without slowing down, Mickelson said, and tried moving to the right in an attempt to avoid the impending collision.

Instead, the minivan struck the Lexus before the driver was able to move to safety. The impact sent the Lexus spinning to the right and completely off of the roadway. The minivan then hit a blue Lincoln Town Car that was stopped just ahead of the Lexus. The impact pushed the Lincoln forward but not enough to strike the next vehicle stopped in the line.

For Linda Spencer, the woman driving the Lincoln, this was the first car crash she had ever been involved in, and she said she was pretty shaken but uninjured. Spencer’s husband of 41 years came to the scene to assist her, she said, and to make sure she was okay.

“It sure changed my plans today,” Spencer said.

The woman driving the minivan had two small children in the vehicle at the time of the crash who were both properly secured with only minor injuries reported.

She was cited for careless driving, Mickelson said, because she was possibly distracted with the children and did not see that traffic was backing up.  Once she became aware of the situation, it was too late, and she was unable to stop in time to avoid the crash.

The Minivan and Lexus sustained extensive damage and were towed from the scene, while the Lincoln was driven away by its owner. 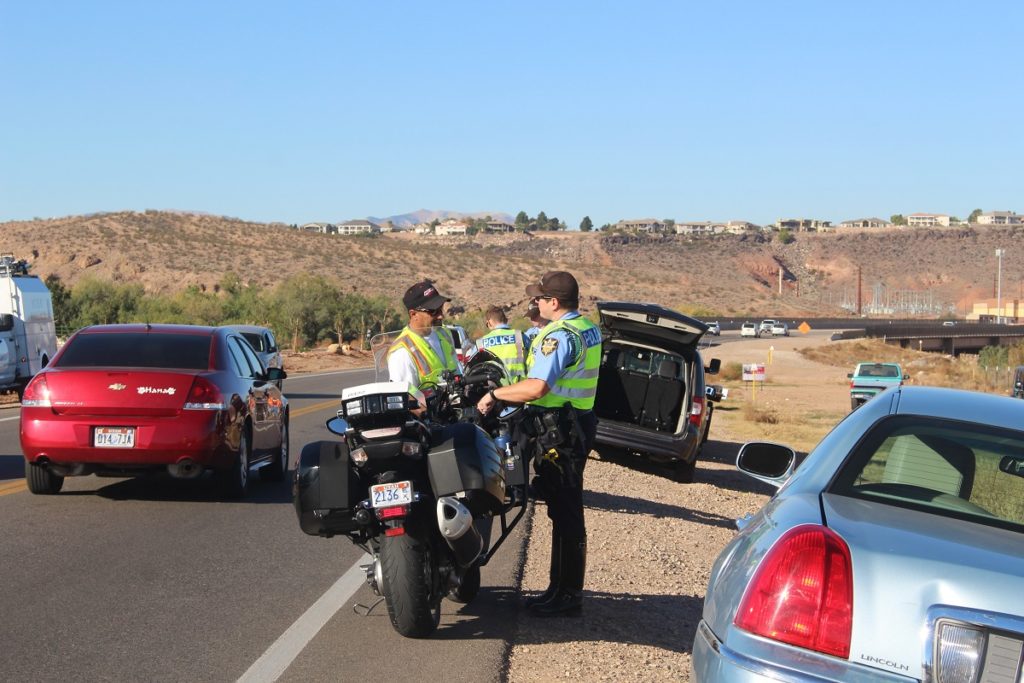 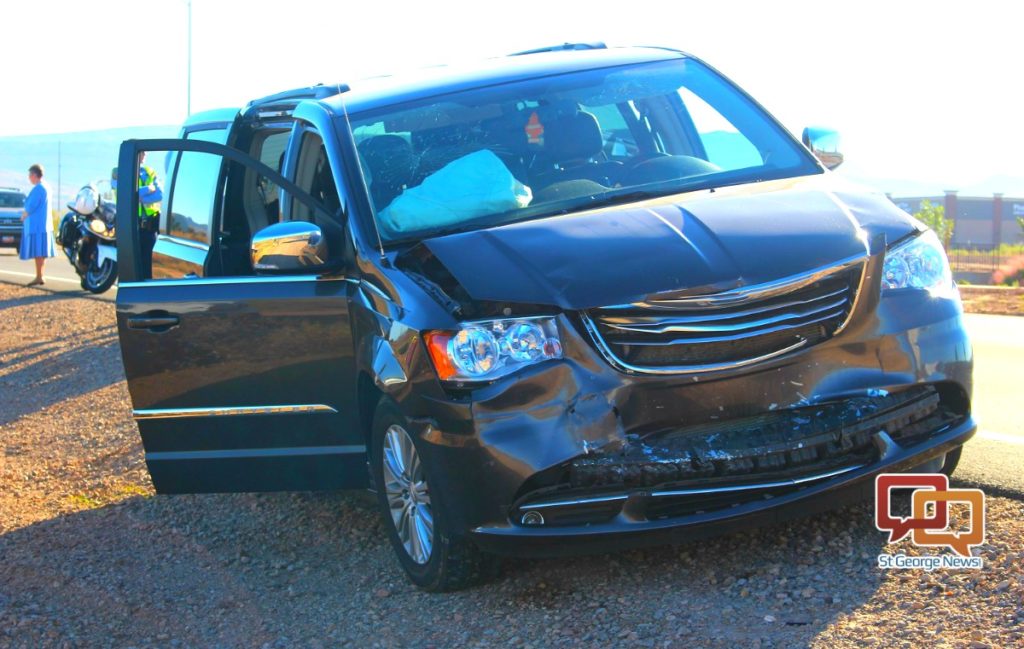 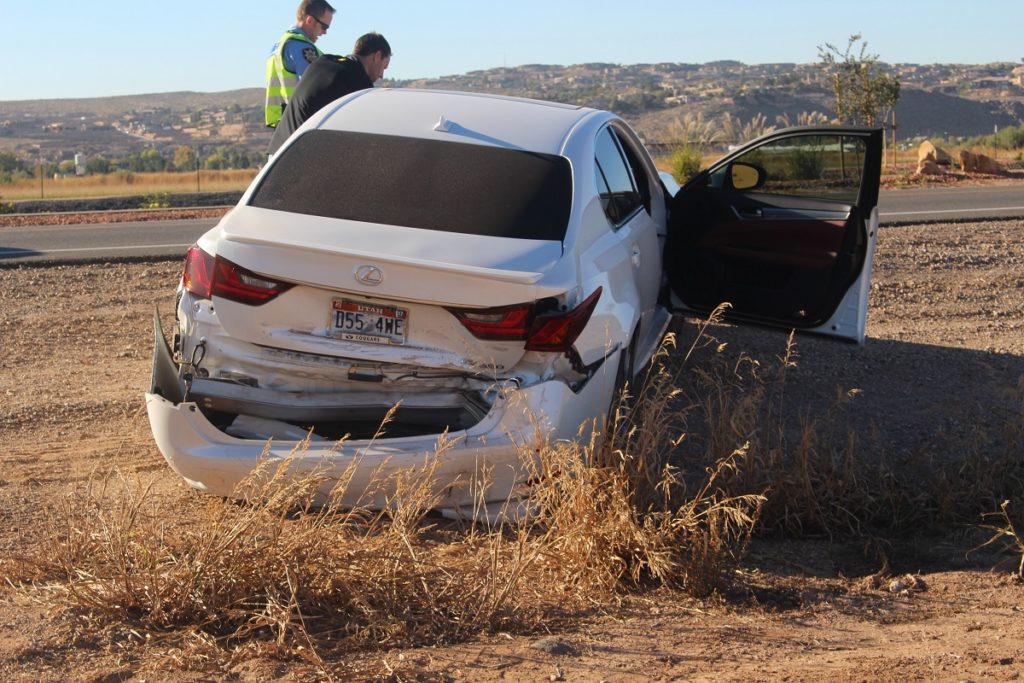 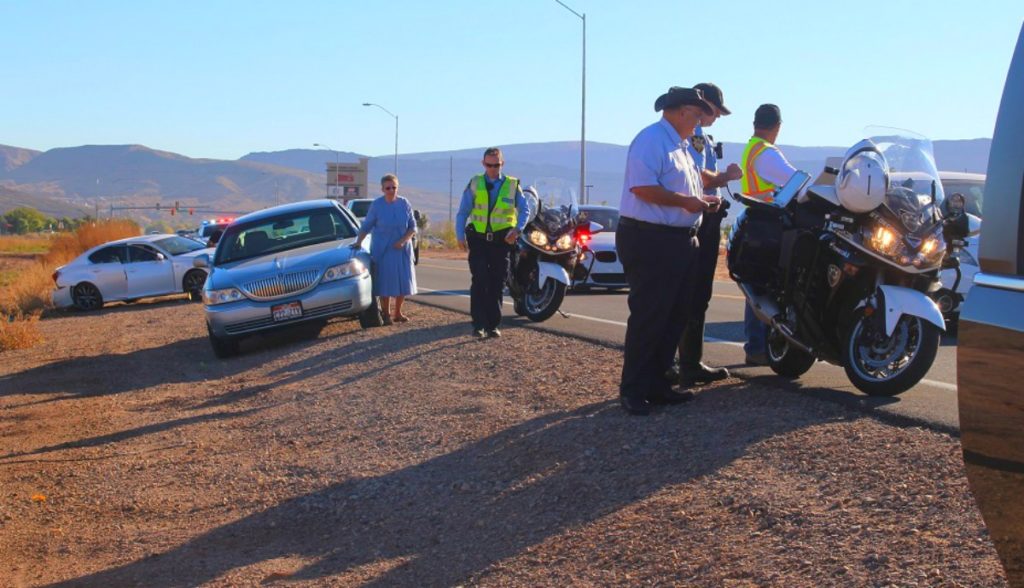 Blue Lincoln Town Car in the background at three-car collision on S. Mall Drive that was set off by a distracted driver, St. George, Utah, Nov. 10, 2016 | Photo by Cody Blowers, St. George News

1 driver taken to hospital after collision at new intersection

Washington County's economy sees a mix of paradoxes, rebounds in wake of pandemic

Layin' it on the Line: How should inflation figure into retirement planning?