CINCINNATI –  BYU football took down Cincinnati 20-3 on the road on Saturday with a stout defensive effort and a strong run game.

BYU improves to 5-4 on the season after outgaining Cincinnati (4-5, 1-4 American Athletic Conference) 338 to 286. The Cougars were successful on third down in the game, converting 10 of 16 attempts and holding the Bearcats to just 4 of 13 on third down and 0 for 2 on fourth.

The Cougar defense held Cincinnati without a touchdown, marking the first time BYU has kept an opponent out of the end zone since 2014 against Savannah State and first FBS opponent since SDSU in the 2012 Poinsettia Bowl. It was the fewest points the Bearcats have scored since a 10-3 loss to Rutgers in 2012.

Taysom Hill led the offense, completing 15 of 25 passes for 130 yards and one interception along with rushing 75 yards for a touchdown. Jamaal Williams had 25 carries for 92 yards while Squally Canada spelled him with nine carries, 41 yards and one touchdown.

On defense, Francis Bernard led the team with nine total tackles along with one pass breakup. Corbin Kaufusi had notched three tackles and one sack while Troy Warner logged three pass breakups in the first half.

In the Bearcats’ opening drive, they made it to the BYU 6-yard line. The Cougars stayed tough, however, holding the home team to a 23-yard field goal, which would be the only score of the game for Cincinnati.

After BYU turned the ball over on downs on its first possession, freshman Austin McChesney picked off Gunner Kiel for his first interception of his career. He returned it 37 yards with 7:12 remaining in the first quarter. However, the Cougar offense stalled, punting the ball back to the Bearcats.

The defense held Cincinnati to a three-and-out on the next possession. On third down for BYU, Hill rushed 9 yards for the first down. Rhett Almond kicked a 28-yard field goal to tie the game 3-3 with 38 seconds left in the first quarter.

In the second quarter, Hill was picked off, turning the ball over with 11:46 to play until the half. The Cougar defense stifled the Bearcats, forcing a three and out.

BYU finally got the offense going late in the second quarter. Colby Pearson and Nick Kurtz each had key third down conversions to keep the drive alive. To spark the team, Hill threw 43-yard flea flicker to Jonah Trinnaman, setting up the score. Hill rushed 8 yards into the end zone for the first touchdown of the game, taking the 10-3 lead heading into the break.

The Cougars outgained Cincinnati 115 to 9 in the second quarter.

To start the second half, Pearson and Canada were clutch on third down to get the first downs in the opening drive of the half. Williams rushed 13 yards to get just short of the end zone, setting up the score. Canada punched in that last yard for his second touchdown of the year, pushing BYU’s lead to 17-3 with 8:26 left in the third quarter.

The Bearcats’ next chance to score came on a 39-yard field goal attempt in the third quarter, but it went wide left to keep the Cougars up 17-3.

BYU defense came up big again when Cincinnati went for it on fourth-and-2. Fred Warner and Tevita Mo’Unga combined to keep Bearcats running back Tion Green short, forcing a turnover on downs.

Draining 9:41 off the clock in the fourth quarter, the Cougars took their time marching down the field on their final scoring drive Williams converted on fourth down with a 2-yard rush. But on the second fourth down BYU faced, the team settled for a 19-yard field goal, pushing the lead to 20-3 with just 1:39 left in the game.

To seal the win, the Cougar defense held the Bearcats to a turnover on downs at the BYU 19-yard lie . Hill took a knee in victory formation to take the last road game of the season for BYU.

The Cougars will finish out the regular season with three-straight home games, starting with a matchup with Southern Utah next Saturday, Nov. 12, at 1 p.m. MST. The game will be televised live on BYUtv along with a radio broadcast on KSL 1160 AM/102.7 FM, BYU Radio – Sirius XM 143 and Cougar IMG Sports Network. 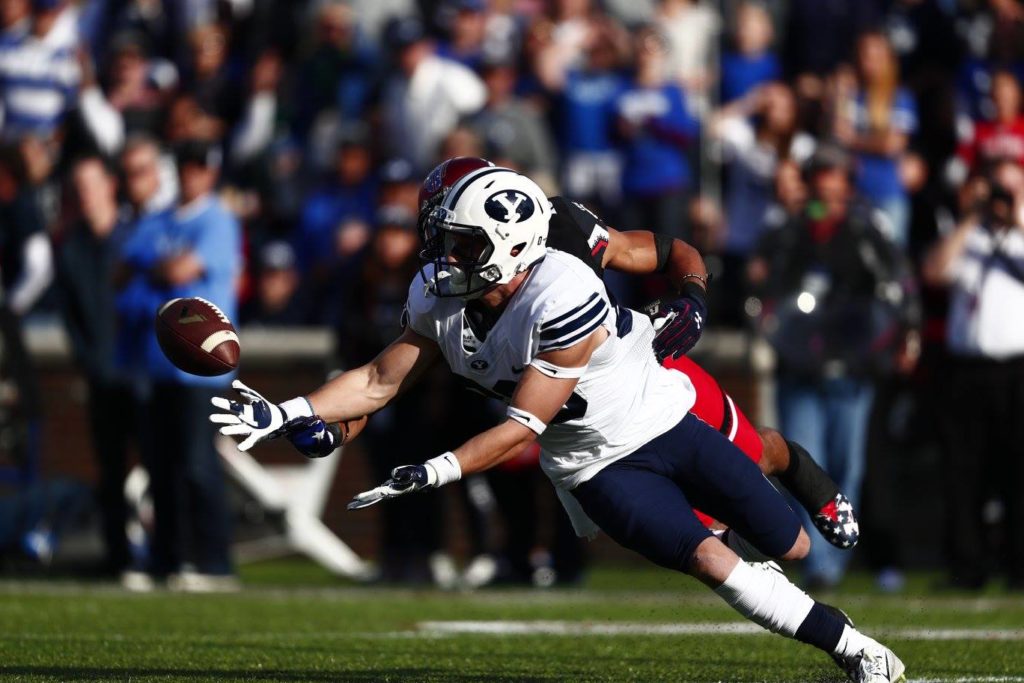 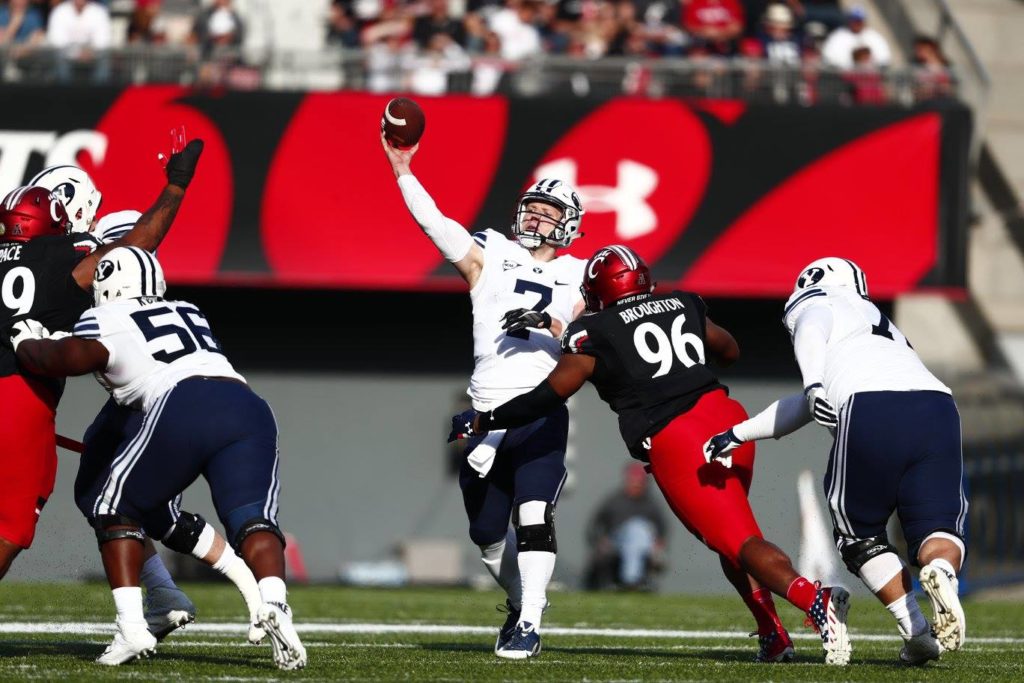 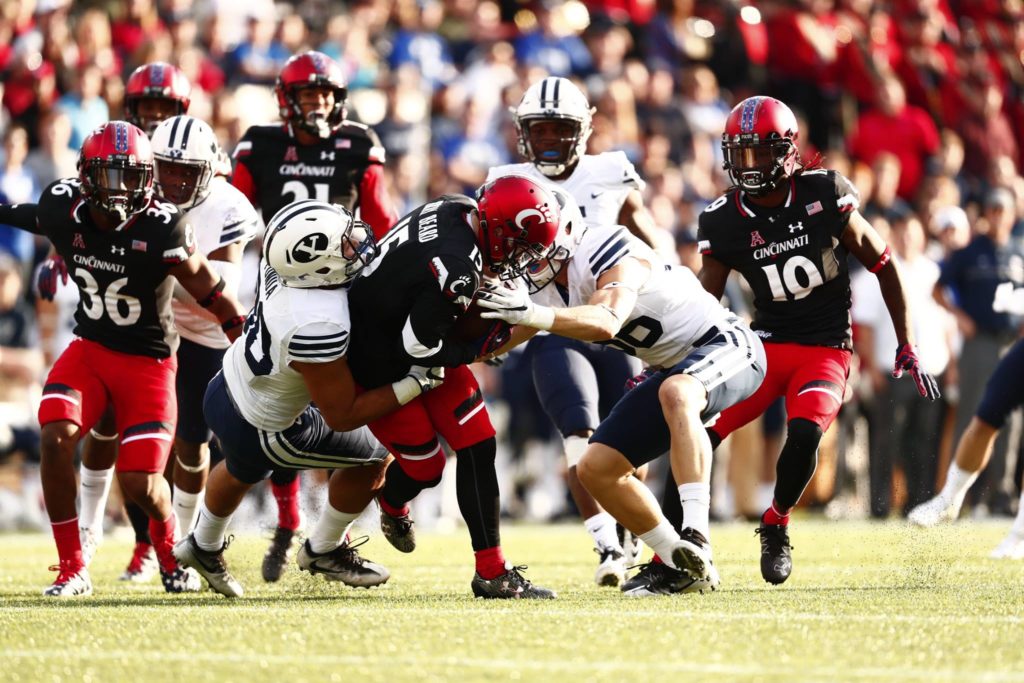 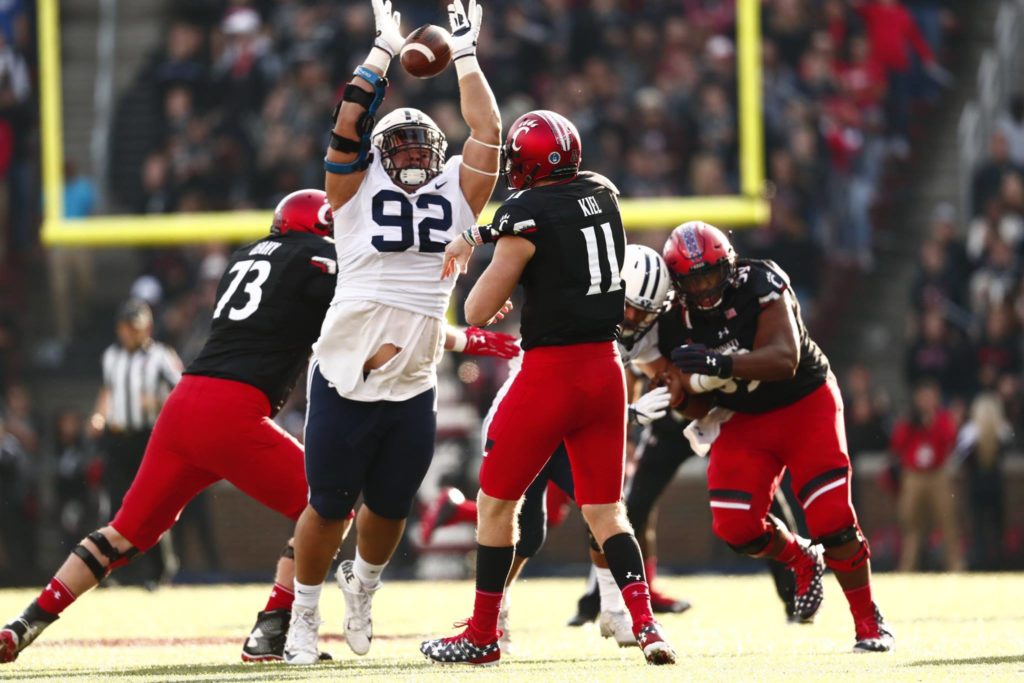 Handsome Tanielu blocks a pass in the second half, BYU at Cincinnati, Cincinnati, Ohio, Nov. 5, 2016 | Photo by BYU Photo 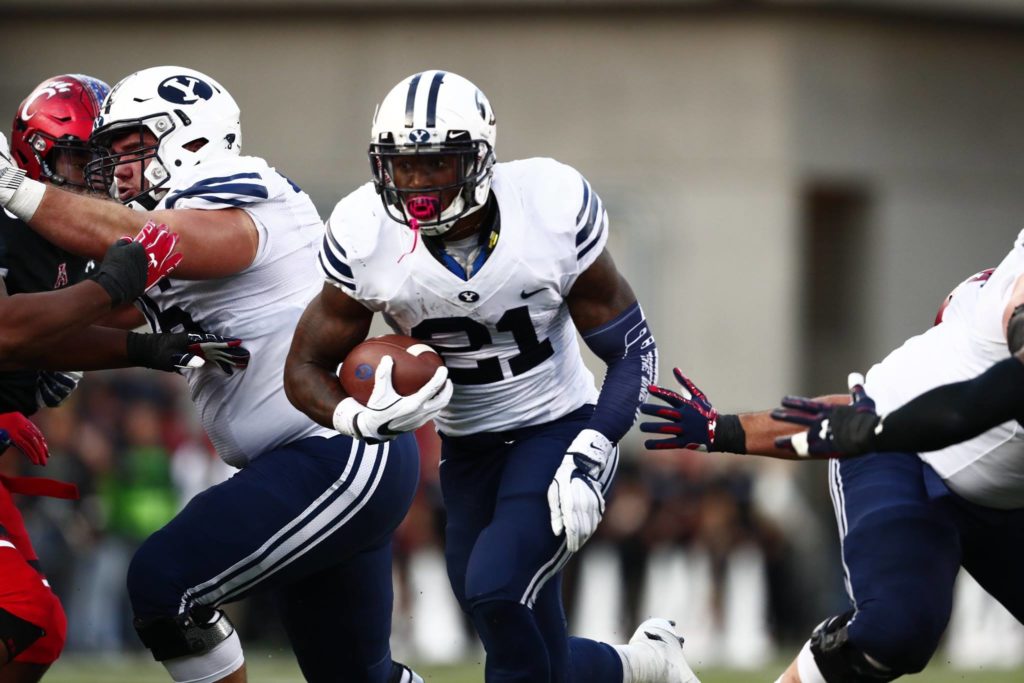 Blue Blood: Cougars poised for a strong finish to 2016 season