The Flyers scored on five straight offensive possessions to run out to a big lead and never looked back, clinching a perfect 5-0 3AA South region run and winning their sixth game in a row.

“Last year, we were region champs, but we had to share it with Desert Hills, so this one feels better than that one,” Dixie coach Andy Stokes said. “I feel like we’re learning and getting better every week. That’s the goal. You put it together a little at a time and I think the kids are getting there. We’re not there yet, but we’re getting there.”

Hurricane got the ball first, but it was Dixie that owned the first quarter. After a Tigers punt, Dixie went 85 yards in 10 plays – using just 2:27 of clock time – to take a 7-0 lead on a Jacob Barben 2-yard run. Barben was 5 for 6 passing on the drive and also ran for 23 yards.

Three plays after the kickoff, Hurricane fumbled on a handoff and Dixie recovered at the 40-yard line. On the next play, Barben hit Nyberg behind the defense for a 40-yard TD to make it 14-0 with 5:54 left in the first quarter.

Hurricane scored on a Josh Parker QB sneak early in the second quarter to make it 21-7, but Dixie answered with its fourth straight scoring drive to make it 28-7 when Nyberg ran one in from 11-yards out.

The Flyers then put the capper on an amazing offensive first half by scoring on a 20-yard pass from Nyberg to Josh Topham with 3:59 to go. That made it 35-7 and was an exhibition of the impressive Dixie offensive. The Flyers had five drives, five touchdowns and 301 yards of offense in the first half.

Nyberg was pressed into duty at quarterback when Barben went down with a foot injury, but team officials said the injury was not serious and he was held out the rest of the game for “precautionary reasons.”

DHS running back Ammon Ah Quin also went down, spraining his ankle in the third quarter. Ah Quin’s dad, Clay, said the injury did not look serious, but would be evaluated on Saturday.

Nyberg passed for 29 yards and that TD, rushed for 180 yards and two TDs and caught four passes for 77 yards and another score. His 67-yard run in the third quarter made it 42-7. Joe Armijo added a late TD for the Tigers.

“It feels good to win the region outright,” Nyberg said. “It means we worked hard and had a good season. It’s fun and it’s good, but the real season starts in two weeks for us.”

Dixie, 6-3 overall and 5-0 in region, has a bye in the first round of the playoffs next week and will await the winner of Bear River-Hurricane. 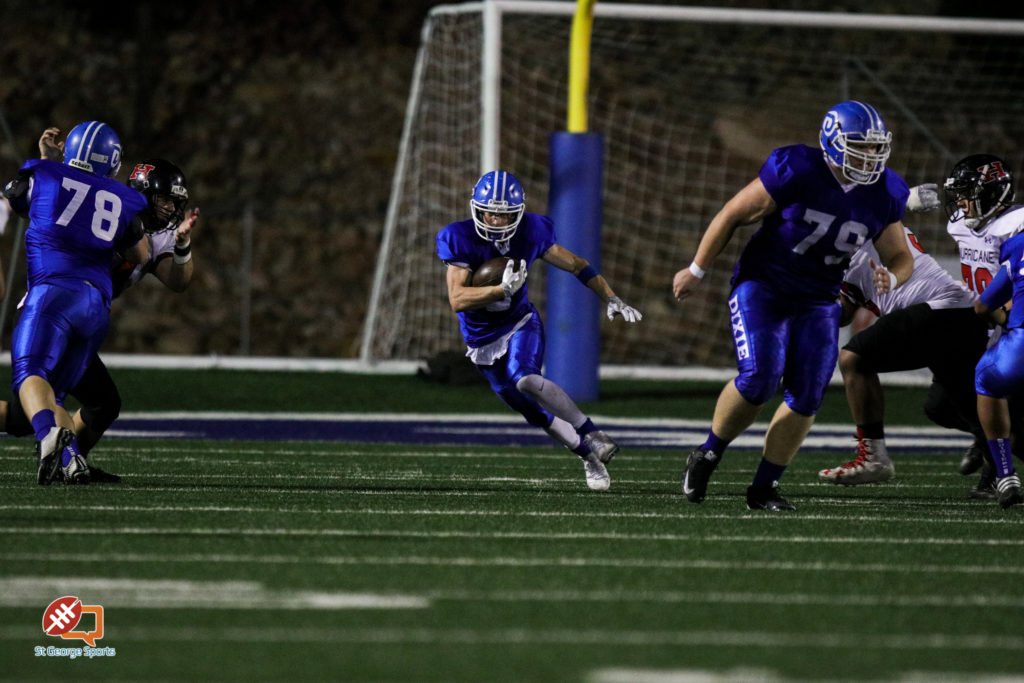 The Tigers, 3-6 and 1-4, ended up in a three-way tie for fourth place in the region. A three-way coin toss was held Friday night and the Tigers ended up as the fifth seed, which means a trip to Garland to take on the Bears next Friday in the first round of the 3AA playoffs. Bear River is 7-3 with key wins over Stansbury and Park City.

For more on this game and the rest of the 3AA South Friday night lights, including video, photos, quotes, stats and insight, go to Saturday Breakdown on St. George News Saturday morning.

Quick hits: No passing, no problem for Cedar against Hurricane