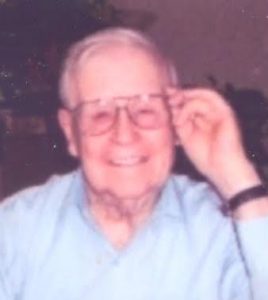 Our father, grandfather, great-grandfather and brother, James Benjamin Slade, passed away Oct. 16 at the Southern Utah Veteran’s Home in Ivins. He was born Oct. 4, 1918, to Benjamin Franklin Slade and Lillie Maud Jones in St. George, Utah. He married Phyllis Woffinden on May 25, 1938. Their marriage was later solemnized in the Manti temple of The Church of Jesus Christ of Latter-day Saints. They were married for 48 years upon Phyllis’ passing in 1986. He later married Janeen Hilton Dahlberg, who also preceded him in death.

He proudly served in the United States Navy during World War II on a supply ship in the Pacific. He saw Pearl Harbor a few days after it was bombed.

Jim had a great sense of humor and always kept his family and all those around him laughing. After he and Phyllis were married in the temple, he served in many capacities in the LDS church, including Bishop of his ward in Dugway, Utah, and he went on two missions with Phyllis and two missions with Janeen.

The family wishes to thank Southern Utah Veteran’s Home and Zion’s Way Hospice for the care given to Jim.