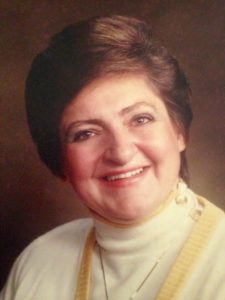 The world is a little poorer today, Sept. 30, and Heaven is a little richer, with the passing of our wife, mother and Oma, Anne Beumer, in St George, Utah. She was born in Dordrecht, the Netherlands, on Nov. 8, 1940, to Clement and Geertje Burgers. She married John Beumer on June 7, 1961, and immigrated with him to Salt Lake City, Utah, in 1963.

For the next 40 years, she was a dedicated member of the First Christian Reformed Church, where she taught Sunday school, acted as a deacon, sang in the choir, raised her children and developed many close friendships. In 2003, she and John moved to St George. They joined Southland Bible church, where she developed many more close friendships and helped establish Hope Pregnancy Center.

Anne lived close to the Lord, with her every day a witness to the love of Christ. She always had a kind word for the people whose paths she crossed and bore all life handed her with the confidence that she did not face it alone. She held several jobs during her life, and she viewed each of those as an opportunity to live her witness to Christ. She lived to the glory of God and prayed that her death would also be to God’s glory. She loved, and she gave, and she did.

But thanks be to God, who gives us the victory through our Lord Jesus Christ. 1 Cor. 15 :56

Anne is preceded in death by her brother Henk Burgers.

She is survived by her husband, John; two sons, Martin (Kelly) and Randy (Laura); three sisters, Marion Trock, Mary Denkers and Sophia Delavarga; and one brother, Peter Burgers, and their spouses. She is also survived by a sister-in-law, Roeli DeHoop, who was like a sister to her. She also leaves behind five grandchildren, J Keagen Beumer (Molly), Lindsey Kossak, (Zack), Madey Beumer, Bobbi Gordon and Amber Reynolds; and five great grandchildren, Quentin, Landen, Ivy, Jan, and Danny; as well as many nieces, nephews and other loved ones, both in the Netherlands and the United States.