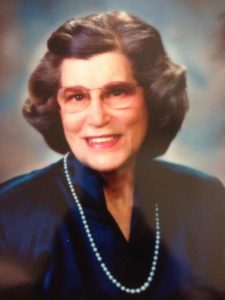 On Sunday Sept. 18, Fawn Schmutz Pickett, aged 97 years, passed peacefully with her family by her side.

She was born to Donald and Amber Timothy Schmutz on June 8, 1919, in New Harmony, Utah, where her father and uncles maintained a herd of 7,000 angora goats; about 30,000 lbs of mohair were sheared and sold each year. There were no automobiles in New Harmony for her first eight years; they went by foot or horse.

In the midst of the Great Depression, market forces were changing the textile industry, as in other aspects of the economy, and the price of mohair plummeted. Taking action, Fawn’s father and uncles sold the herd of prized angora goats and sought opportunity elsewhere in Southern Utah.

Fawn’s family moved south and built a home at 145 E. Tabernacle, and for years Donald successfully ran Motel St. George on St. George Boulevard. Along with her regular school classes, Fawn became a serious dance student and learned to be an expert horseback rider. As a teen and adult, she exercised the thoroughbred horses of Joseph E. Olsen and trained the show animals in English-stye hunter-class jumping.

It was in middle school that Fawn met St. George native Evan Pickett, her mate for life.  The couple married in August of 1942, in Muskogee, Oklahoma, as Evan prepared to leave for duty in World War II. His career as an engineer officer in the U.S. Army from 1939 to 1961, with wartime deployments in Europe, Africa, and Korea, brought years of separation and considerable danger. Fawn was proud of his many decorations, and enjoyed the role and responsibilities of a lieutenant colonel’s wife.

At his graveside dedication in 1996, she accepted with consummate grace and poise the folded flag that was handed her with a salute. His portrait, with his dress hat and the framed flag, was always placed where she could see it upon awakening.

In the 1950s, Fawn and Evan were stationed in Turkey with their first daughter, Shauna, and vacationed in Egypt, Germany, Italy and France. Fawn told stories of crossing the Atlantic in a little troop ship fitted for post-war military family transport; of hearing calls to prayer from the minarets of mosques in Ankara and Istanbul; of a snowy Christmas-Eve sleigh ride through the town of Garmisch; and of New Year’s Eve in Paris. Miraculously, Evan had made it through four years of wartime combat without a single wound, and on a visit to Rome he showed his wife and daughter the lamp post where, standing guard 14 years earlier, he had nearly received a German bullet (the bullet was still in the lamp post, just above where his head had been).

While performing beautifully in the roles of wife and mother, Fawn had her own lifelong passion to nurture. She had grown up with one burning desire: to dance. Before marriage, she danced and choreographed professionally.  While Evan was at war, she moved to New York City for one unforgettable year to study with the great modern dance pioneer Martha Graham, and she was invited to dance for a season in Graham’s company. By the time Evan returned, she had been teaching in Salt Lake City and St George. Wherever the family was stationed, Fawn formed an active dance studio and always managed to balance the teaching of Graham technique with seeing to her family’s needs.

Upon Evan’s military retirement, the family moved to Santa Barbara, California, where two more children, Lynds and Evan Spencer II, were born. Fawn taught dance at the historic Lobero Theatre and choreographed dances for operas at the Music Academy of the West. She also volunteered for innumerable church assignments, perennially supported her husband and children, ran the household … and participated in more than her share of non-injury automobile collisions and allisions. Surveying the damage to the family station wagon after one such occasion, Evan half-jokingly wondered aloud how much a surplus military tank would cost.

From 1977 to 1994, Fawn and Evan lived in retirement in Pine Valley, Utah. They gardened, canned, raised sheep and ducks, hosted family and grandchildren, and enjoyed many outings and trips. While traveling between St. George and Pine Valley on State Route 18 after sundown, Fawn’s Lincoln Continental routinely collided with deer; her brother-in-law Charles Pickett suggested an environmental impact statement ought to be filed accordingly. On more than one occasion, Evan, a seasoned hunter, dressed the fresh venison and froze it for later consumption by the family. “Waste not, want not.”

When she returned to live in southern Utah, Fawn discovered to her dismay that her beloved dance department at Dixie State University (then Dixie College) had disappeared.  Although determined to retire from a lifetime of teaching, she brought local dance teachers and university administrators together and helped mount a series of public performances and fundraisers. In just a few years, Dixie’s dance department was reinstated, and it continues successful today — one of her happiest accomplishments.

The couple relocated to St George about a year and a half before Evan’s death in 1996. Following the passing of her husband, Fawn stayed very active in her community.

She was a faithful member of The Church of Jesus Christ of Latter-day Saints, regularly volunteering at the St. George LDS Temple; she enthusiastically served on the City Arts Commission, and supported all things “Dixie.” Another role she cherished was grandmother to many.  Nothing captured the adoration of Fawn more than children, and candy and wisdom were often dispensed to young friends.

In recognition of Fawn’s tireless and loving work in the arts, SouthernUtahNow.com aired a spring 2011 “You Did That?” segment on her accomplishments (YouTube: search “Fawn Pickett”), and that same fall the St George Arts Commission presented her an achievement award.

In lieu of flowers, donations may be made to the College of the Arts at Dixie State University, or to the Alzheimer’s and Dementia Society of St George.