OPINION – The first of three presidential debates between Donald Trump and Hillary Clinton was billed as one of the greatest rumbles in the history of politics.

In sports terms, it was Ali vs. Frazier, the Red Sox vs. Yankees, the Lakers vs. Celtics.

That doesn’t mean it was filled with pearls of wonkish wisdom. It wasn’t by any means, particularly if you were looking for specifics from the Republican contender.

In that regard, it was, as one Twitter poster put it, “a debate between a politician and your drunken uncle’s Facebook page.”

The lines were drawn early.

Hillary Clinton came out swinging a heavy bat for the middle class, endorsing tax cuts for them and the poor and tax hikes for the rich.

Donald Trump broke from the gate espousing his trickle-down economics theories, based solidly on the policies of Ronald Reagan.

It was a night of broad themes and generalities from Trump, specifics and details from Clinton.

This was not a debate for the feint of heart.

It was rough and tumble with Trump interrupting Clinton 46 times, Clinton delivering sharp one-liners to counter his attacks and moderator Lester Holt being shouted down more than a handful of times by Trump.

If it was a boxing match, you’d have to score it 4 rounds for Clinton, two for Trump. 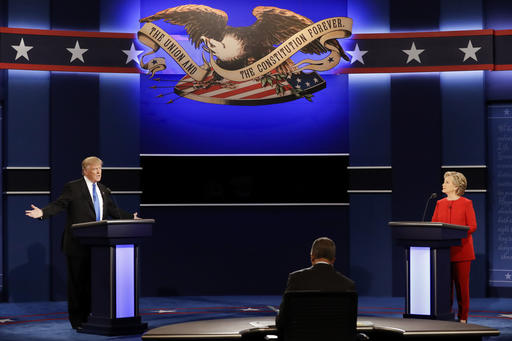 There were some very healthy exchanges.

He criticized her for disappearing as she prepared for the debates.

She responded that she was also preparing to be president.

She nailed him on climate change.

She went after him on his business practices.

“I take advantage of the laws of the nation,” he said.

Trump didn’t know how to handle it when he landed his heaviest punch, going after Clinton about her email investigation. But instead of driving it home, he immediately lost any momentum he created by launching into a monologue about his personal wealth.

Trump was clearly out of his element.

Clinton controlled the debate, scored heavily and repeatedly and drew the strongest response from an audience that was admonished to withhold applause and outbursts.

Both Clinton and Trump looked awkward when the topic turned to racial matters.

The biggest problems with the Trump campaign resurfaced Monday night and that is his lack of focus and understanding of what is at hand.

Through most of the debate he targeted his comments at Barack Obama instead of Clinton.

Trump’s volatile side also surfaced a number of times when Clinton found exactly the right buttons to push.

But his biggest flaw was that it was painfully obvious he did little preparation for the debate.

Clinton entered the debate with the baggage of being highly unlikable.

At times, she did seem a bit stiff, but that is to be expected in such debates, especially when dealing with complex issues like the economy. Boring stuff, difficult to follow, but necessary in a presidential debate.

What is important in these debates is for the candidate to understand that voters are more interested in what you will do for the country, which means your answers need to be offered from a much different perspective and with greater purpose than to underscore your personal business successes. Trump made it all personal, from defending his refusal to release his tax returns to complaining about the negative ads being run against him.

Clinton came off very polished, which is not necessarily a good thing in this election year when many voters are looking for an anti-politician.

She is clearly well schooled in the political game, with an aggressive, go-for-the-jugular staff. She can eviscerate an opponent with a flash of her cunning and slice them up with ferocity. There were several times she could have done so Monday night, but she restrained herself, keeping the switchblade in her boot because she knows there are two more debates to go. I expect her to sharpen her attack in subsequent debates.

I am still not convinced that this is the best we could muster this election cycle. I look at Trump and Clinton and see two very out of touch rich people spitting each other in the eye. Neither has come up from the street, neither has scrambled, worried about paying the rent, been concerned about work furloughs or layoffs or faced the inequities of the poor, disadvantaged or minority segments of our nation.

There was no passion in their remarks, no great attempts at statesmanship, honor or compassion. There was no soul.

It reeked of a hollowness, of two empty shells intent on obliterating each other instead of offering solutions to make us healthier, more economically sound, more secure.

Instead, we got a battle, a personal grudge match, which is well-suited to the WWE, but not so much for presidential politics.

My takeaway from Monday night’s debate?

Hillary Clinton was clearly the winner, by any measure.

She was quick, she was pointed, she was decisive, she was on-message, she came off as more presidential.

He was scattered, unfocused, easily pushed to volatility and vague.

Did the debate live up to all the hype?

It is clear that these two people neither like nor respect each other, which is a danger to both. The most important rule of politics? Never underestimate your opponent.

Sadly, the most disappointing aspect of this debate is the feeling that there is a cataclysmic disconnect between both candidates and the people they hope to represent.

Neither can relate to our struggle, neither can understand our concerns.

This is a race for power, prestige; a race to feed the ego.

We are lost in all of this. We are inconsequential because at the end of the day, win, lose or draw, they will go home to their mansions and slip themselves between silk sheets while we huddle beneath our wooly blankets.

Ed Kociela is an opinion columnist. The opinions stated in this article are his and not representative of St. George News.

Ed Kociela has won numerous awards from the Associated Press and Society of Professional Journalists. He now works as a freelance writer based alternately in St. George, Utah, and on The Baja in Mexico. His career includes newspaper, magazine, and broadcast experience as a sportswriter, rock critic, news reporter, columnist, and essayist. His novels, 'plygs' and ‘plygs2’ about the history of polygamy along the Utah-Arizona state line, are available at Amazon.com. His play, "Downwinders," was one of only three presented for a series of readings by the Utah Shakespeare Festival's New American Playwright series in 2005, he has written two screenplays, and beginning work on his third novel. You can usually find him, hand-in-hand, with his beloved wife Cara, enjoying Snow Canyon, walking the beach, strolling through the local art district, or sitting at one of their favorite gawking places outside a friendly little cantina. He can be reached by email at edkociela.mx@gmail.com Follow him on Twitter at www.Twitter.com/EdKociela. The opinions stated in this article are Kociela's own and may not be representative of St. George News.

Views from around the world on US presidential debate

In focus with Chris Stewart on potential Trump presidency

Perspectives: Hungry Venezuelans vs. US elections, which is more relevant?

Hatch: Senate should wait to fill Scalia’s seat until after the election