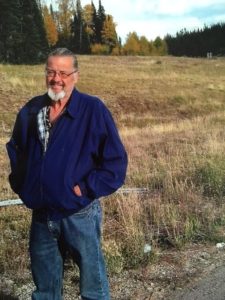 Rodney Taylor Ence, aka Ralph, Rupert & Fluff, passed away Sept. 5, 2016, in Enterprise, Oregon, after a short battle with pancreatic cancer. He was born on March 6, 1948, to Floyd and Enid Ence in Ivins, Utah.

Rod spent his youth farming and ranching throughout Southern Utah. He fondly recalled stories of hours spent on the combine harvesting wheat and hay for farmers in the area. Rod was a “Jack-of-all-trades” and was always devising solutions to the most common problems.

He loved cooking and baking and was known for his quest to use healthy and natural ingredients. Rod was a free-thinker and always believed in questioning the established opinions whether in religion or politics. Most importantly, he was not afraid to offer his advice or opinions, even when it was clearly not wanted.

Rod was one of the first general contractors in the area building many homes throughout Washington County. He was also a realtor and a broker, starting the first Century 21 real-estate franchise in town.

Throughout his life, Rod had a passion for farming and living off the earth. In his later years, he spent his time in Beryl, Utah, growing produce that he sold at local farmers markets in Cedar City and St. George. Rod’s weaknesses in life were bark chocolate, homemade baked goods, real butter, nuts and a good conversation.

Rod was preceded in death by his parents, Floyd and Enid, and his son Charron. He is survived by his siblings, Elaine, Clark Marilyn and Kelly; his children (The “7 Ch’s”), Chesa, Choli, Chase, Channing, Chalin, Chait, Chance, Emily, their spouses and significant others and his grandchildren.

Rod’s one request was to be buried in God’s Country —Wallowa County, Oregon. He will always be fondly remembered and loved for his wit, stubborn temperament and his passion for anything alternative.