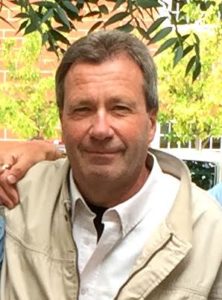 To the family, he was known as “Doug” but in his later business career, he preferred using his first given name of Gilbert (named after his grandfather Gilbert G Heaton). He loved the association and experiences of being with his cousins and family. Some of his favorite memories include:

He was always game to participate in whatever his brother Ron was doing.

Doug attended elementary and High School in St George, Utah, before graduating from Junction City High School in Kansas (class of 1977). He served a mission for The Church of Jesus Christ of Latter-day Saints in the London England South Mission. He attended University of Utah, graduating from Weber State University with a Bachelor of Science Degree in Logistical Engineering. He received his master’s degree from National University in San Diego, California.

He married Jan Metcalf and together they welcomed five children into their family: Danny, Kenny, Andrew, Amanda, and Tyler. He later was married to Brenda Bergeson and had two more daughters; Rachel and Sarah.

His career included employment at General Dynamics in San Diego where he worked with the design, production, and support team for the Tomahawk Cruise Missile deployment during Desert Storm. He then transferred to SAIC where he performed a lead role in the preparation of the Command, Control & Communications (C3I) Surveillance Resonance programs and Waterside Security System. He also worked on the C-17, F-16, B-2, UH-60A, SH-60 Blackhawk and Seahawk Helicopters and Peacekeeper ICBM Missile programs. During this time, he served as President of the San Diego Engineering Society and Vice President of San Diego Chapter of the Society of Logistics Engineers.

After relocating to Salt Lake City with L-3 Communications he was Program Manager working with the Royal Air Force in England and Republic of South Korea Intelligence, Surveillance, and Reconnaissance (ISR) Data link Exploitation centers. He provided support related studies for many Army, Air Force, Navy, and Marine Corp ISR programs during his 23 years of engineering and management related experience in the military DoD/Aerospace field.

He was also involved in a catering and mobile restaurant food service business. He teamed with the Colosimo Family to retail food products and services for business luncheons, family reunions, farmer’s markets and downtown SLC convention center special events.

Most recently, (Gilbert) Doug returned to St George and managed a local Resource and Re-entry Program. He published a technical paper to promote “Responsive Community Based Adult Re-Entry Program in Southern Utah using Mentors.” He was a Case Manager Supervisor at Olympus Academy until his ALS prevented him from continuing this work.

In his leisure time he owned and operated a PC Computer business and was Founder of RACHEL’s Creations (Tilla Americana sculptures, crafts, inspirational poetry, and art, retailed at the Quilted Bear). He enjoyed participating in bicycle events and running marathons in St George, Salt Lake and San Diego.

He will be remembered for his positive attitude and humorous outlook on life.

He was preceded in death by his father, Burton G. Milne, his older brother, Ronald B. Milne, his grandparents:  Ronald and Alda (Stucki) Milne, Gilbert and Mildred (Lytle) Heaton

The family wishes to express thanks to the caring individuals at IHC Hospice who tenderly rendered service and care. Gilbert truly loved and appreciated them!  He always sent them on their way with a thank you and a humorous comment. Ed, Kathy, Christy, Shiela, Vickie, Ruth and all the others that helped us make his last days more comfortable. We appreciated you as much as he did!  Thank you.