ST. GEORGE — A suspect in the abduction of David Heisler, whose body was discovered Aug. 18 on the Arizona Strip, pleaded not guilty in court Tuesday to charges of aggravated kidnapping, aggravated burglary and theft of a motor vehicle.

Francis Lee McCard, 55, appeared in 5th District Court with his attorney Ariel Taylor before Judge Eric Ludlow in St. George to enter not guilty pleas to all three felony counts.

During an Aug. 8 preliminary hearing, the court found that the State had met the burden of proof according to all charges and bound McCard over for arraignment.

On June 27, 30-year-old Heisler was allegedly assaulted and kidnapped from his Santa Clara home. An extensive seven-and-a-half-week search for Heisler ensued, and came to a close when Heisler’s body was discovered by a Bureau of Land Management geologist in the Mt. Trumbull region of the Arizona Strip.

An autopsy conducted five days later by the Mohave County Medical Examiner’s Office in Lake Havasu City, Arizona, confirmed the badly decomposed body was that of Heisler, whose cause of death is pending further investigation.

A federal indictment is being sought in the case, officials said.

Surviving the death of a son

Following the news of her son’s death, David Heisler’s biological mother, Mary Brace, of Phoenix, Arizona, expressed her appreciation and thanks to the Washington County community, prosecuting attorney Zachary Weiland and detectives with the Santa Clara-Ivins Police Department for their support, time and effort in finding her son.

“While it has been very difficult for me to be so far away from the Santa Clara area, it has been a comfort to me to see so many people coming out to show their support,” Brace told St. George News. “I join David’s father and Stepmother, Kenneth and Debbie Heisler, in their appreciation for the continued support as we face the long and difficult road of mourning our beloved David.”

Even though it has been 30 years, Brace said she remembers the birth of her son, David, “as if it was only yesterday.”

“He was born at 8 a.m. He was 8 pounds, 13 ounces of my flesh and blood and I loved every ounce of him,” Brace said. “I had a rocking chair that I had painted white which I rocked him in for many months while I soothed him through his bouts with asthma.”

As he grew older, Brace said her son took an interest in World Wrestling Entertainment which she said he loved to talk about with his older brother, Billy. The two also loved talking professional baseball together, even long after David Heisler moved to Utah with his father, Brace said.

As time went on, David Heisler’s pride and joy became his daughter Mariah, Brace said, adding that she enjoyed hearing her son’s enthusiasm about becoming a dad, and that she always looked forward to seeing photos of him with Mariah.

Now, Brace is living the nightmare of trying to cope with her son’s tragic death.

“As his mother, his murder has been worse than a bad dream,” she said, and added:

Since his kidnapping, I have walked through my days with what feels like a giant hole in my chest. As preparations for his memorial begin and more court dates start filling the calendar, it is not a distraction and does not take away the fact that my child was stolen. Any justice we see in the prosecution of the three who stand accused of my son’s murder will always be hollow as it does not bring him back to us.

McCard and Heisler’s former girlfriend Kelley Marie Perry, 31, who is the mother of Heisler’s 6-year-old child, were arrested July 5 on charges including assault and kidnapping of Heisler. They are the last known people to see Heisler alive, according to the Santa Clara-Ivins Police Department.

During McCard’s preliminary hearing, Sgt. Jaron Studley testified that during the investigation, McCard admitted to going to Heisler’s home the morning of June 27 with co-defendants Perry and Tammy Renee Freeman, 54, who was arrested July 9 for her alleged involvement in the crime. Studley testified that McCard said his intent was to go to Heisler’s home to “scare” Heisler.

McCard and Perry both admitted to tying up Heisler, assaulting him in his home, placing a pillowcase over his head and forcing him into the backseat of his car, according to police.

McCard told investigators he drove Heisler to a remote area on the Arizona Strip and left Heisler standing next to a tree – approximately 40 miles from St. George.

At the time of his disappearance, Heisler had just been awarded sole custody of his daughter, Mariah, after years of related legal proceedings. During a June 13 bench trial, the 5th District Court in Washington County ordered sole custody of Heisler and Perry’s daughter to David Heisler.

In the court’s trial minute orders, it states:

The 5th District Court found David Heisler’s parents, with whom he lived at the time he was abducted, a major stabilizing factor in the matters it considered in making its custody rulings.

“The Court also finds that the closest bond is between the child and her Step-grandmother (Debbie Heisler),” the trial minutes state.

Perry was given supervised parenting time with her daughter. According to court documents, Perry was “extremely upset” about the custody order, to which McCard allegedly told Perry, “I will fix this.”

Members of the community attended McCard’s arraignment Tuesday wearing teal shirts that read “#HeislerStrong” and “#MariahsArmy” as a show of support for the Heisler family. 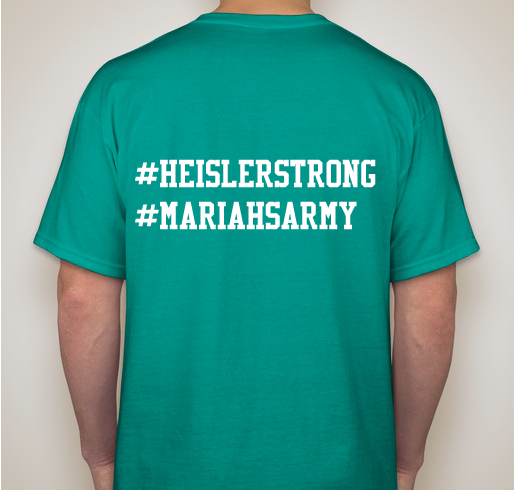 In the months following David Heisler’s disappearance, a Mariah’s Army Facebook page was created to honor David Heisler and his daughter, help raise funds – initially, to help with search efforts; now, to apply toward funeral expenses and Mariah’s financial needs – and to bring awareness to domestic violence.

Supporters of the Heisler family may purchase window decals for a $10 donation while T-shirts are offered for a $20 donation.

Additionally, Cliffside Restaurant located at 511 South Airport Road where David Heisler worked will be holding a fundraiser Sept. 13 in which 15 percent of the day’s sales will be donated to the Heisler family, according to the restaurant.

2 aggravated kidnapping arrests made in connection with David Heisler disappearance

Protect your harvest by managing insects on vegetables, herbs