ST. GEORGE — Federal authorities are offering a $50,000 reward to the person or persons who provide information leading to the arrest and conviction of polygamous sect leader Lyle Steed Jeffs, whom authorities said they believe is hiding in Utah.

“We believe that Lyle Jeffs may still be in the United States and, indeed, in Utah, so public awareness is key,” FBI Special Agent in Charge Eric Barnhart said at a press conference held Monday to discuss the reward, as well as new information in the fugitive search for Lyle Jeffs.

Lyle Jeffs was released from jail on June 9 and ordered to home confinement while awaiting trial on accusations he helped orchestrate a multimillion-dollar food stamp fraud scheme within the Fundamentalist Church of Jesus Christ of Latter Day Saints.

“We believe during the evening hours of June 18, (Lyle Jeffs) was able to slip (off) his GPS bracelet,” Barnhart said. “We believe he did so in a premeditated fashion and with assistance.”

The twin cities of Hildale, Utah, and Colorado City, Arizona – collectively known as Short Creek – straddle the Utah-Arizona border and are home base to thousands of FLDS members who consider Warren Jeffs to be the church’s prophet and mouthpiece of God on Earth.

Federal authorities said they have indications that during Lyle Jeffs’ time on the lam in Short Creek, he was in communication with his brother, Warren Jeffs, who is serving a sentence of life plus 20 years in a Texas prison since his 2011 conviction on crimes related to marrying and sexually abusing underage girls he considered brides.

Barnhart said Monday that the FBI believes Lyle Jeffs received directions from Warren Jeffs that Lyle Jeffs did not follow to the imprisoned prophet’s satisfaction due, in part, to Lyle Jeffs’ concerns of being arrested by law enforcement.

“Don’t know how to characterize it,” Barnhart said, “but it could possibly be a fracturing of the leadership of the FLDS church.”

Despite his potential falling out with Warren Jeffs, FBI officials said they still believe Lyle Jeffs has supporters who are willing to hide him and keep him from being arrested.

“When somebody has folks willing to hide them, you can stay hidden for a while, but not forever,” Barnhart said, adding, “As you recall, his brother was placed on our FBI Top 10 Most Wanted list in May of 2006 and he’s, of course, now down in prison in Texas, so it’s really just a matter of time.” 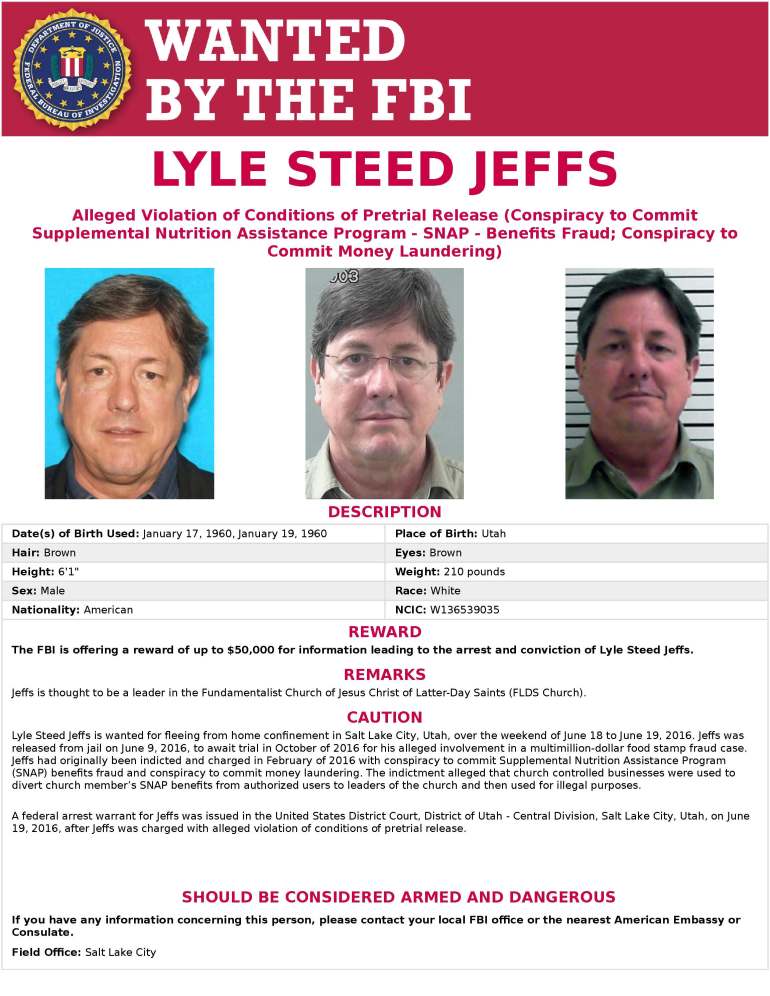 Barnhart said the FBI has been receiving a steady flow of tips about Lyle Jeffs since he absconded, and that it is vetting all of them.

“What we’re hoping, though, that there may be some opportunities where some people may not feel the same loyalty to Lyle now that they did, say back in June,” Barnhart said, “and that may present an opportunity.”

Anyone with information on Lyle Jeffs’ whereabouts is asked to call the FBI Salt Lake City Field Office at 801-579­-1400 or a local FBI office.

“His ultimate capture may not depend on this reward,” Barnhart said, “but it’s certainly not going to hurt to get it back out there in the public’s awareness.”