ST. GEORGE — Members of the Fundamentalist Church of Jesus Christ of Latter Day Saints are in “serious chaos” and undergoing an “extreme food shortage” since leader Lyle Jeffs fled federal authorities, an attorney for a polygamous sect leader said in federal court Monday during the latest hearing in a multimillion-dollar food stamp fraud case.

During Monday’s detention hearings for top-ranking FLDS leaders John Wayman and Seth Jeffs, U.S. District Judge Ted Stewart heard arguments about whether the two men should be released from jail again after they allegedly violated their supervised release.

Defense attorneys for John Wayman and Seth Jeffs conceded Monday that their clients met on four occasions in late July at the direction of religious leaders; but they also argued that the men can still be trusted because the meetings weren’t held to talk about the case or devise an escape plan.

Instead, the men were making phone calls to a list of religious followers for a church meeting designed to bring stability to a group undergoing a major crisis, said Wayman’s attorney Jim Bradshaw, according to The Associated Press.

“They can have their religion,” Bradshaw said. “The government can’t stop that.”

During the hearings, Stewart said it appears as though Wayman and Seth Jeffs are “rationalizing” their actions based on their religion, making him worry about what else they will rationalize, the AP reported.

Stewart said he would be issuing a written ruling on whether Wayman and Seth Jeffs will be ordered to remain in custody until trial.

From inside a Texas prison cell, polygamous leader Warren Jeffs is ordering a complete reorganization of leadership within the FLDS church – sending his fugitive brother on a “repentance mission” and ordering members to be rebaptized, according to documents filed Aug. 8 in federal court.

The twin cities of Hildale, Utah, and Colorado City, Arizona, collectively known as Short Creek, straddle the Utah-Arizona border and are home base to thousands of FLDS members who consider Warren Jeffs to be the church’s prophet and mouthpiece of God on earth.

“My church order are out of order,” Warren Jeffs wrote to his followers in a June 3 letter in which he strips his fugitive brother, Lyle Jeffs, of “priesthood authority” after what he refers to as “a short revelation.” 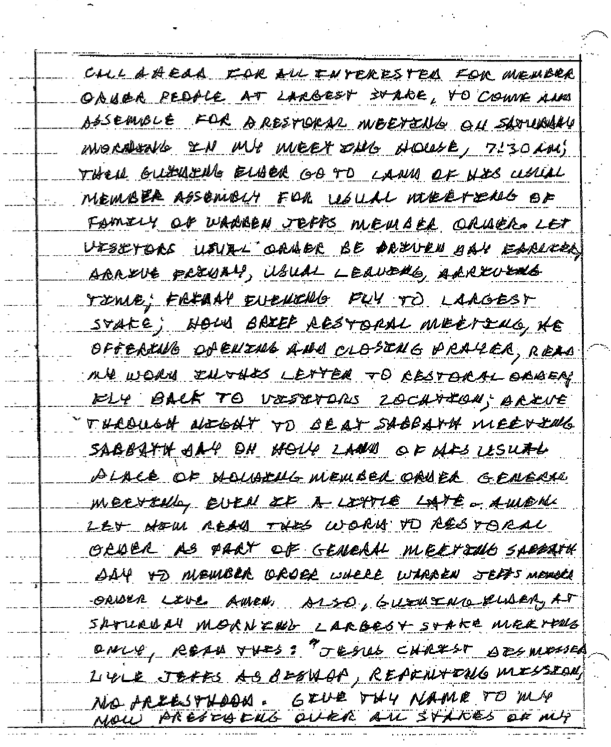 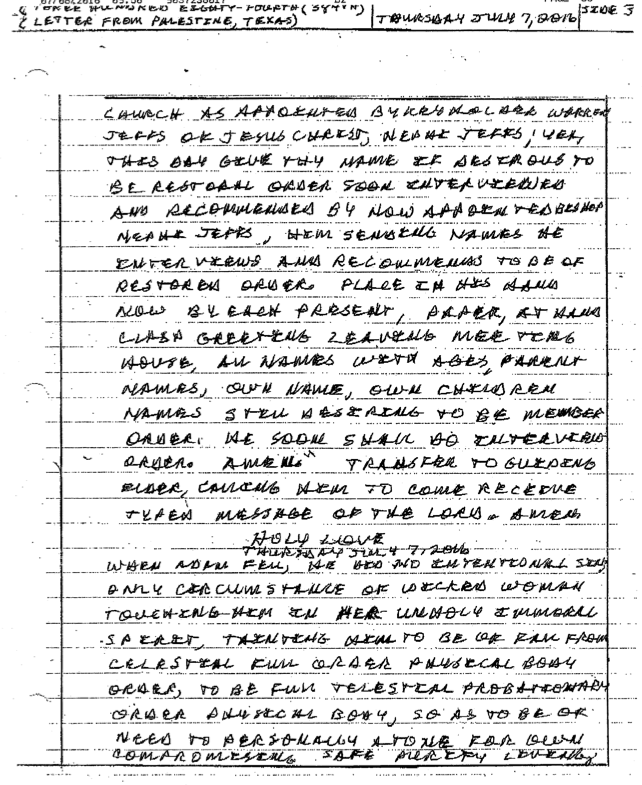 Warren Jeffs, who is serving a sentence of life plus 20 years since his 2011 conviction on crimes related to marrying and sexually abusing underage girls he considered brides, continues to dictate the actions of the polygamous sect’s adherents, either through fear or loyalty, prosecutors allege in a court filing seeking to keep Wayman and Seth Jeffs behind bars as they await trial in the food stamp fraud case.

Former FLDS bishop Lyle Jeffs is a federal fugitive from those charges, after he fled home confinement in mid-June in order to carry out the dictates of Warren Jeffs, assistant U.S. Attorney Rob Lund wrote in the motion.

Warren Jeffs has since named a new bishop of Short Creek, replacing one brother, Lyle Jeffs, with another, Nephi Jeffs.

Warren Jeffs calls for United Order members to be rebaptized

The imprisoned prophet has also placed his followers on “restoral status,” meaning they must renew their commitment to the FLDS church. And, Warren Jeffs wrote in a 10-page letter dated June 3, anyone who doesn’t follow his orders will be banished and sent “far away.”

Court documents filed Aug. 8 reveal that Warren Jeffs recently disbanded the polygamous sect’s United Order – traditionally known as an elite echelon established under Lyle Jeffs in which members are assured a spot in heaven in return for loyalty, faithfulness and obedience to restrictions on diet, mainstream media and other lifestyle choices.

As bishop, Lyle Jeffs had conducted frequent interviews with FLDS members in Short Creek to determine who was worthy of the United Order.

In a June 7 letter, Warren Jeffs directs Lyle Jeffs to convert all of the United Order members back to “Restoral Order status” and for them to be reinterviewed, rebaptized and reconfirmed into the United Order.

In an audio recording transcript documenting a June 25 prison visit by two Jeffs wives, Warren Jeffs sends a message to Lyle Jeffs reminding him that he only possesses the authority that Warren Jeffs grants him. Warren Jeffs threatens to excommunicate Lyle Jeffs and send him away if he doesn’t do as Warren Jeffs commands.

Shortly thereafter, in a letter dated July 7 to Nephi Jeffs, Warren Jeffs dismisses Lyle Jeffs as bishop, strips him of all priesthood power and sends him away on a repentance mission.

In his lengthy instructions to Nephi Jeffs, Warren Jeffs noted that each of Short Creek’s recent bishops had failed: “Each one has had the great sin of finding comfort in women’s attention,” Warren Jeffs said, warning: “Do not gossip with the family of Warren Jeffs.”

Nearly a month after Lyle Jeffs fled federal custody, he wrote a letter to Warren Jeffs dated July 16. In it he said:

I seek yours and the Lord’s forgiveness for the hesitation and any fear that was a part of me and pray that it will never show its ugly head again. I do feel the gentle peace of the sweet Spirit seeking to continually increase in becoming like God in everything I do, that is be of and by Him, through you dear father. You are my Priesthood head and have the right to rule in my life, and I love to have it so. Please continue to teach and correct me where necessary in polishing me into the likeness of God which I see and feel in you.

“The devil is raging in the hearts of the youth, many leaving,” Lyle Jeffs wrote. “Groups of females on their own going out in the world to get jobs cleaning motels, no checking in and giving into the world.”

Members of the FLDS sect believe polygamy brings exaltation in heaven. The group is an offshoot of mainstream Mormonism, which disavowed polygamy more than 100 years ago.

On the EDge: Is this the end of the FLDS?