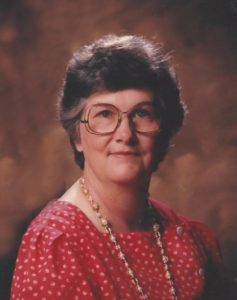 Carol Jean (Lundberg) Stokes, age 80, passed away peacefully in the early morning hours of Aug. 11, 2016, in her home on 600 South in St. George, Utah, due to complications of chronic nephritis and old age. Carol was born Oct. 13, 1935, in Lancaster, California, to Olga (Wilkins) and Neal Martin Lundberg.

Carol spent the early part of her life in California where her father worked in the Gold Fields to provide for his family and to raise money for his future business in St George. When Carol was around five years old she moved with her parents to Washington, Utah, to the 300 N. Main Street area where the family had property. Some of Carol’s fondest memories as a child came from the time she spent with her extended family on this property.

Carol often shared memories of being carried on her father’s shoulders to go swim at the boilers. She would recall with fondness the peppermint candies her grandfather, Orman Wilkins, would carry in his pockets for his grand kids. And how Orman would tease her until Grandma would yell at him to stop. She remembers walking to the post office in Washington with her father and begging a penny or nickel from him so she could go into Nissans to get a treat.

Grandpa Wilkins was an avid gardener and she would recall just how the tomatoes and watermelon her grandpa raised in his garden tasted. Grandpa would sell the extra produce to make a little extra money, and in doing so taught Carol the importance of giving a little extra in produce for the money he received in return. Carol had a gritty pioneer woman disposition she gained as a child born of the Great Depression. She saved everything for another use including bread wrappers, the cardboard boxes supplies came in, and the tissues she used to wipe her nose, which often were later found in pieces in the wash.

Carol told often the story of how the home in Washington City did not have indoor plumbing, of using the back house, and having to bathe in a No. 3 bathtub. She often traveled to visit her grandma and grandpa Lundberg in Roosevelt for the holidays until they themselves moved to St. George. Her father’s business picked up and she moved with her parents to a home in St George a half block from the Dixie Bottling Plant and later to a home next door to the Bottling Plant on Tabernacle Street in St George. These moves were significant to her as these homes had indoor plumbing.

Carol has some great memories of her father as he tried to build his business in St George. Her dad’s involvement with both the Lions and the Elks resulted in her becoming a Lions/Elks parade queen one year.

Carol worked as a head maid at Motel 6 and as a seamstress at American Linen. She routinely used her talents to sew clothing for her family during some lean financial years. There were a few years where Carol would be wearing both shoes and socks with holes in them so her children did not have to. She ensured her children did not lack for those things which would develop their talents such as musical instruments, sports equipment, and the support they needed.  Carol was not one for gaining personal attention. She was a quiet achiever. Never asking anyone to do something she was not willing to do herself. She was often self-effacing, looking inward to correct and change herself before casting blame on others.

Carol attended Dixie Academy on Main Street where she took Spanish and other courses. It was her associations in church, her prayers to meet a young man who was active in the church, and a Spanish class, which resulted in her meeting the love of her life. It was at the wedding reception of her best friend where she was a bridesmaid that she met Dean Stokes, one of the groomsmen, of whom she described as a being so nice and a returned missionary. Carol must have made an impression on Dean because he made a number of trips on two lane roads between San Diego and St. George, in a car which had no A/C, during the summer of 1954. Carol and Dean were married in the St. George Temple on Oct. 27, 1954. They soon moved to San Diego for a year and returned to St. George so Dean could go to work for Carol’s Dad. Their marriage resulted in six children.

Carol was an active member of The Church of Jesus Christ of Latter-day Saints her entire life, where she served in many callings. One of her favorites was serving a mission with Dean.

She was preceded in death by her husband, Dean Stokes; her brother, Neal Martin Lundberg JR; and her parents, Olga and Neal Lundberg.

Family request that in lieu of flowers donations be made to the Washington County Drug Court.