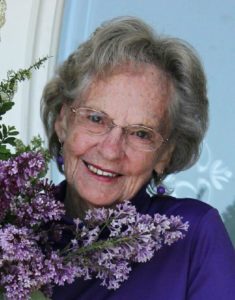 Mabel Steele (Small) Hiett, 99, passed away on Aug. 16 at her daughter’s home in New Harmony, Utah, surrounded by all of her children. The youngest of seven children, Mabel was born on June 3, 1917, in Red Mesa, Colorado, to the late Benjamin and Tryphena Willden Steele.

Mabel’s heritage is rich with pioneer ancestry, and she lived her life with the determination and passion of those early ancestors. Her great-great grandfather, Charles Willden, was one of the ambitious settlers of south-central Utah and built the original Fort Willden on the site of the current Old Cove Fort, which he also helped erect.

She was a lifelong devoted member of The Church of Jesus Christ of Latter-day Saints. She was married to Ulysse Alby Small on June 28, 1936, and subsequently raised five daughters within that faith.

Mabel was a skilled homemaker, and after she and her husband left their ranching endeavors in the early 1960s, she established many “mini” households throughout Southern Utah to accommodate her husband’s mining profession while she finished raising her children.

Mabel held many positions in the auxiliaries of the church and was especially fond of the children in the Primary organization and the Young Women organization. She was a great lover of music and encouraged the musical talents of her daughters throughout their lives.

Her award-winning yards and gardens were celebrated places of great beauty, and she was especially skilled at raising “cosmos that smile.” She had a great love for literature and was a sensitive, prolific writer. All of her children are lucky recipients of her beautiful letters and poetry.

After the passing of her husband in January 1995, Mabel was fortunate to be courted by her high school sweetheart and was married to Clifford Hiett on May 24, 1995. They were happily married for over fifteen years until his death in June 2010.

The family wishes to gratefully acknowledge the dedicated assistance of Intermountain Health Care and Hospice Service for their compassionate care of our loved one during her final days.