CALIENTE, Nev. — The advent of the steam locomotive in the early 19th century, while a technological marvel, had its drawbacks. Steam locomotives required water for their boilers every 20 miles. As a result, stations and settlements popped up across the desert region as water wells were bored into the earth. When diesel engines replaced steam-driven trains, many a station turned ghost town with nothing left to indicate their existence besides a marker or pile of adobe. However, Caliente, Nevada, stands today with splendid ghost town features.

The Cherokees and Paiutes were the first dwellers in the area known as the Meadow Valley Wash, where U.S. Route 93 is located today. Members of these native tribes knew about shiny rocks and helped miners find more precious minerals. But more permanent pioneers came to the area in 1857 for various reasons and began settlements. Brothers Ike and Dow Barton, two African-American slaves escaped from Arkansas, settled in the valley in 1860.

Brothers William and Charles Culverwell bought up all of what is now Caliente in 1874 and named it “Culverwell Ranch.” Meadow Valley Wash transformed into dairies and lush farmland with orchards and vineyards. The ranchers found a perfect market for their produce, hay and grain among the miners in nearby boomtowns.

During the time Caliente was gestating, President Abraham Lincoln signed the Pacific Railway Act of 1862, creating the Union Pacific Railroad and authorizing the construction of the Transcontinental Railroad. It spanned 1,700 miles of prairie to Salt Lake City, Utah, the only developed settlement before reaching gold rush territory.

The rail line was built by three private companies largely financed by government bonds and huge land grants. A race began and ended 1869 at Promontory Summit in the Utah territory – essentially the Oregon Trail became railroad in less than six years. However, a north-south route between Salt Lake City, Utah, and Los Angeles, California, would take much longer.

Today, the Boxcar Museum, situated next to the Caliente Train Depot, is full of information and artifacts of Caliente’s early days. Janet Gray, chairman of the Caliente Heritage Association, grew up in Caliente and her father worked for the railroad. She serves as docent for the museum.

Difficulties caused delay; things like railroad financial problems, blasting through stone mountains and squabbles over ownership by rival railroad lines. Obtaining a right-of-way through Caliente caused postponement that kept the trains from coming.

Property in the middle of Culverwell Ranch was needed to continue the rail line, Gray said. The rail companies continued to bicker. Two separate lines could only get through the canyon by crossing each other more than 20 times. One company would lay track by day, and the other team pulled it up in the dark.

Gray tells a story of how William Culverwell pointed his long-barrel shotgun at two arguing men. Adamant about giving only one right-of-way, Culverwell demanded the railroad companies settle the dispute or he would pull the trigger. The two rivals eventually settled their differences.

The story “Caliente’s First Train,” published by Harolds Club of Reno and written under the direction of the Thomas C. Wilson Advertising Agency of Reno, 1951-57, paints a picture of the warm summer morning in 1901 when the first train came into Caliente, still known at the time as “Culverwell.”

The settlers assembled at the point where the railroad was formed. Most had never seen a locomotive and certainly not a string of cars. The settlers came from farms and ranches miles around. Dressed in their Sunday best, old and young packed their buckboards and buggies with ranch-style picnic lunches of roast chicken sandwiches, hard boiled eggs, apple pie, spice cakes and sugar cookies.

When the little work train chugged into view, the engineer pulled his high whistle to clear the tracks. At the wild sound, the desert-bred horses bolted and reared. They whinnied in white-eyed horror and stampeded for safety. The buggies, wagons and some passengers were dragged and clattered off down the canyon. Pies and cakes flew from the buggies with every bump.

When everything calmed down, the ranchers untangled horses, wagons and buggies, and the younger generation gathered the pies, cakes and remains of picnic lunches that were dumped from the carriages and had a feast.

Even given the chaos – and perhaps even because of it – the youngsters thought the first train to Culverwell was a great success.

That same year, the town changed its name to “Calientes,” named for the hot water spring found in the surrounding mountains. When the post office arrived, the letter s was dropped, and the town became simply “Caliente.”

The north-south line was completed in 1905. Many other settlers came to Caliente, not only to ranch and farm but because of railroad opportunities. During Caliente’s heyday, it had 47 saloons, four barber shops, two mercantile stores, two blacksmith shops, two hotels, a livery stable, a butcher shop and a hot springs bathing resort.

“Caliente was a hub of action,” Gray said.

After a fire burned the first train depot, the impressive Mission Revival-style Caliente Train Depot took its place in 1923 and is still a shining star of the town. The new depot and town became a major division point for the Union Pacific Railroad line, a place for everything from long-distance freight trains to local services.

The population of Caliente exploded because of the railroad serving the mines, and the town prospered until the 1940s. Diesel power replaced the steam engines, but the crushing blow to Caliente was the change of the division point. When the railroad moved the point to Las Vegas, Nevada, Caliente’s population dwindled. But the town, steeped in history, never lost its spirit.

Caliente is a pleasant 110-mile drive from St. George, Utah, passing through Enterprise, Utah. After crossing the Nevada border and around the town of Panaca, the landscape opens up into lush circles of green and gold where ranchers grow alfalfa, wheat and corn – the Meadow Valley Wash. This area follows U.S. Route 93, known as the Great Basin Highway, north and south of Caliente.

Upon arrival in Caliente, a good first stop is the previous Culverwell Hotel, now called the Caliente Hot Springs Motel and Spa. To get there, pull over as you come into town when the highway becomes Spring Street. The hotel is on the left, hidden by tall cottonwood trees. For a good view, use careful footsteps and cross the old railroad trestle. Surprising as it may be, the mineral spa is still in use.

While in town, visitors will notice the row houses built by the railroad company for employees. While some of these heritage cottages are in different degrees of disrepair, there are also clues that the bungalows are slowly becoming individualized and occupied once again.

A fisherman who was unloading his pickup truck in front of a row home at the time of my visit said he moved to Caliente for the change of pace.

“I just moved here four months ago and don’t know much about the history,” he said. “Just relocated from California and love the slow quiet life; and the trout and bass in nearby waters.” He pointed to his bulging willow creel.

“We enjoy the new 2-mile walk next to the river we take for exercise every day,” they said. “We love this quiet town.”

The Caliente Train Depot, which currently houses the city offices and library, is just off Clover Street at 100 Depot Ave. Two benches represent the railroad waiting station. A mural on the wall paints a picture of the water stops for the steam engines running from Caliente to Las Vegas. The depot is typically open weekdays at 9 a.m. PDT.

The Boxcar Museum is also located at 100 Depot Ave. and is open Monday, Wednesday and Friday 10 a.m. to 2 p.m. If the door is locked, visitors are invited to telephone 715-726-3579 and a docent will try to meet them if one is available.

There are a few eateries in town, including Brandin’ Iron, 185 Clover St.; Knotty Pine Restaurant, 690 Front St.; and Pioneer Pizza, 127 N. Spring St., but not all are open every day.

Kershaw-Ryan State Park is 3 miles south of Caliente, situated in the colorful Rainbow Canyon with towering walls. Remnants of early settlers’ gardens, orchards and vineyards provide a sharp contrast to the rugged landscape. The park has campsites, picnic tables, hiking trails, restrooms and a wading pool fed by the nearby spring.

A day trip to Caliente could be combined with other ghost town exploring. Pioche, 25.6 miles north on U.S. 93, has informative history museums and many refurbished buildings. 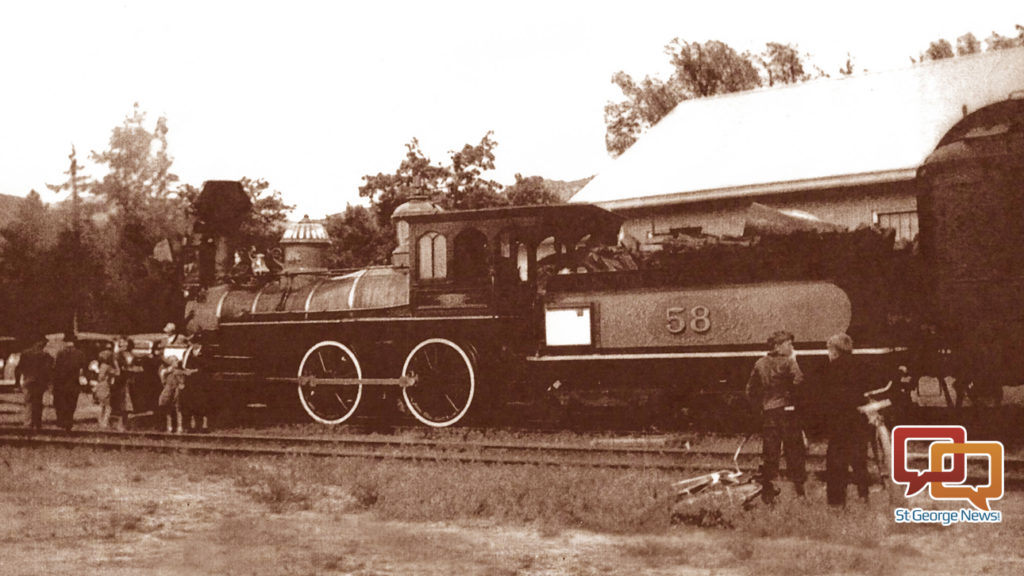 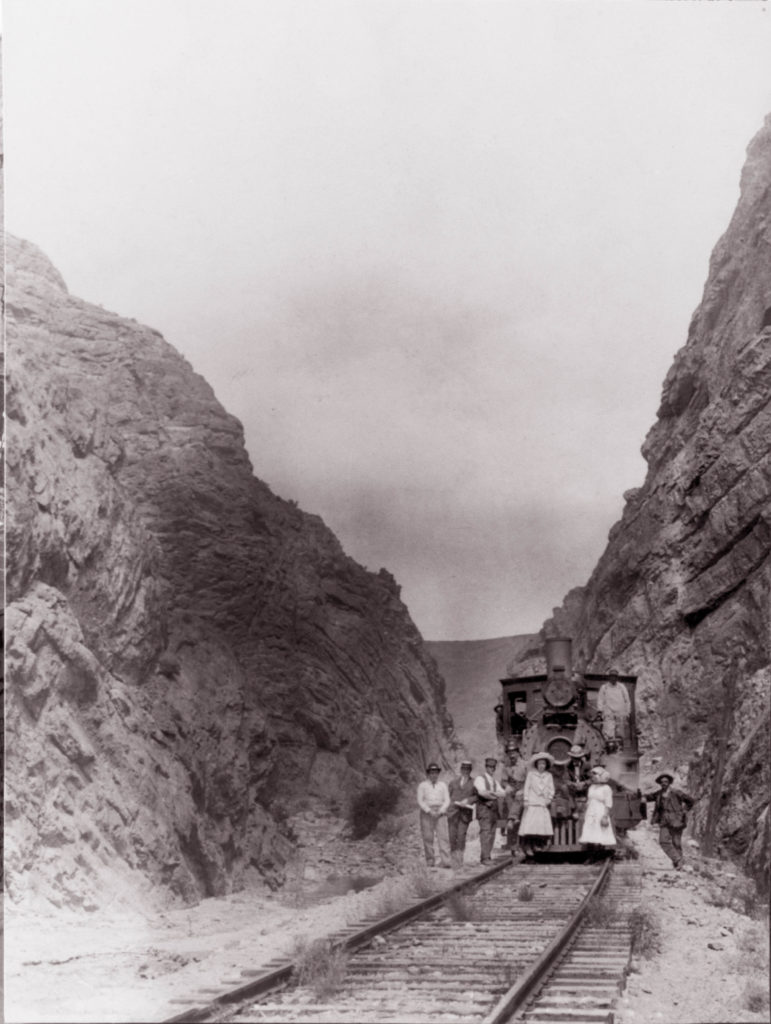 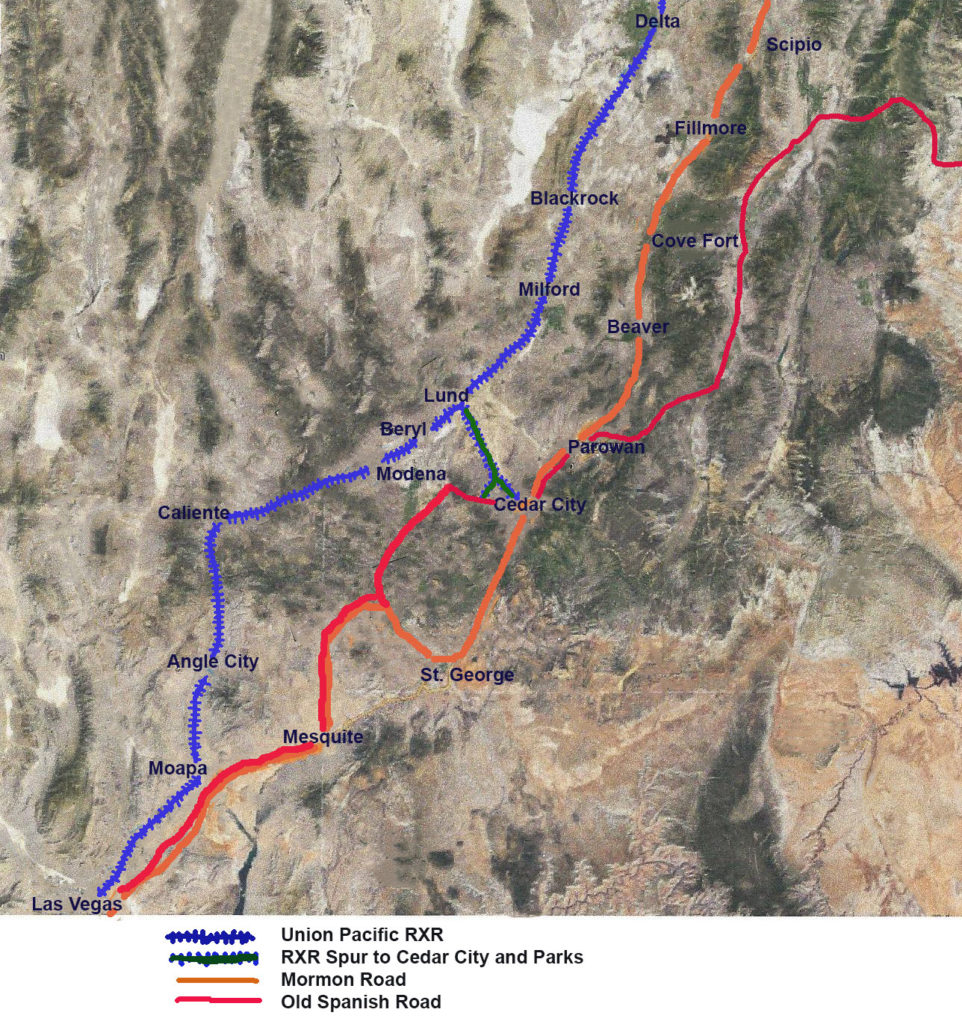 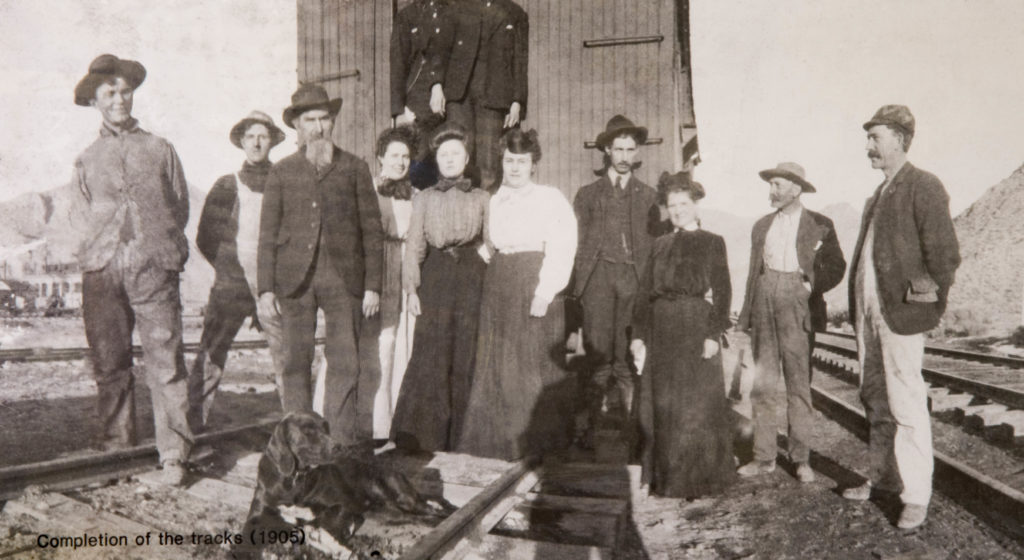 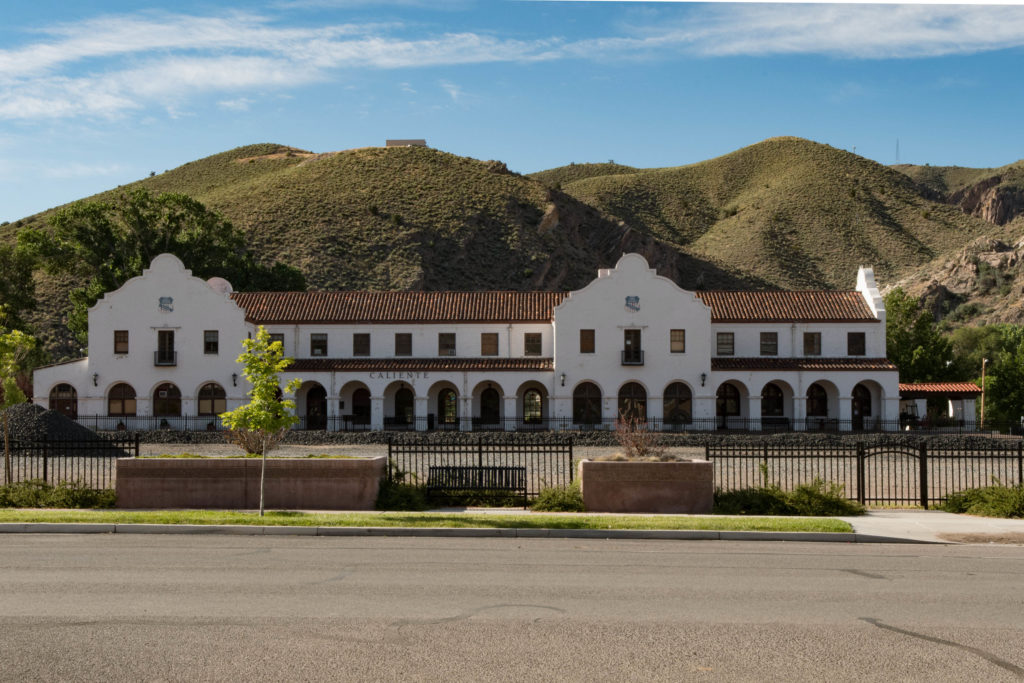 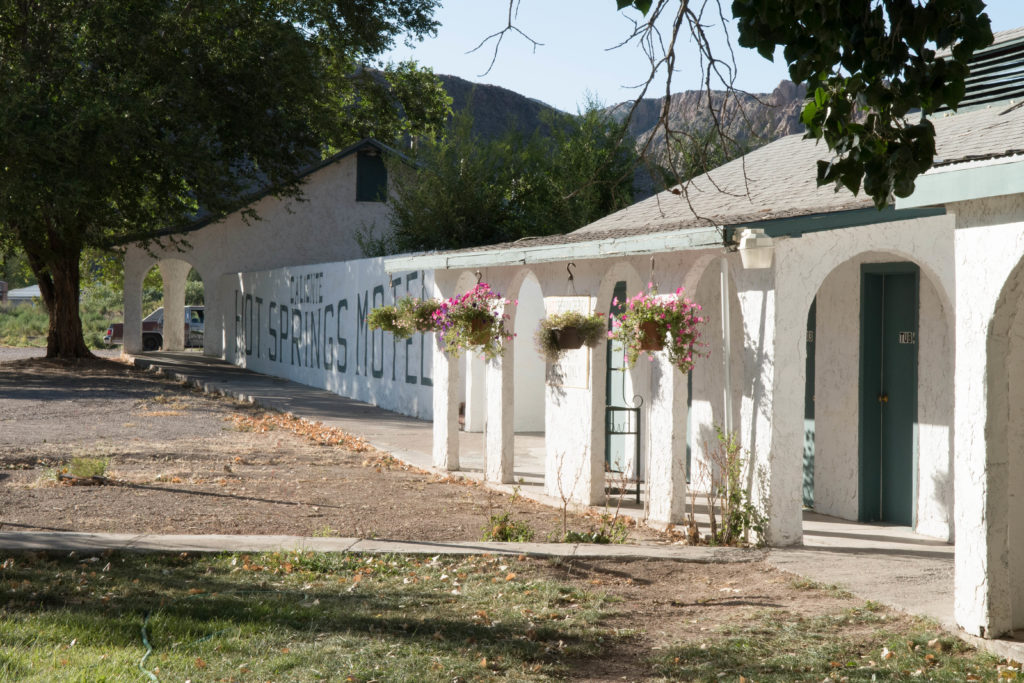 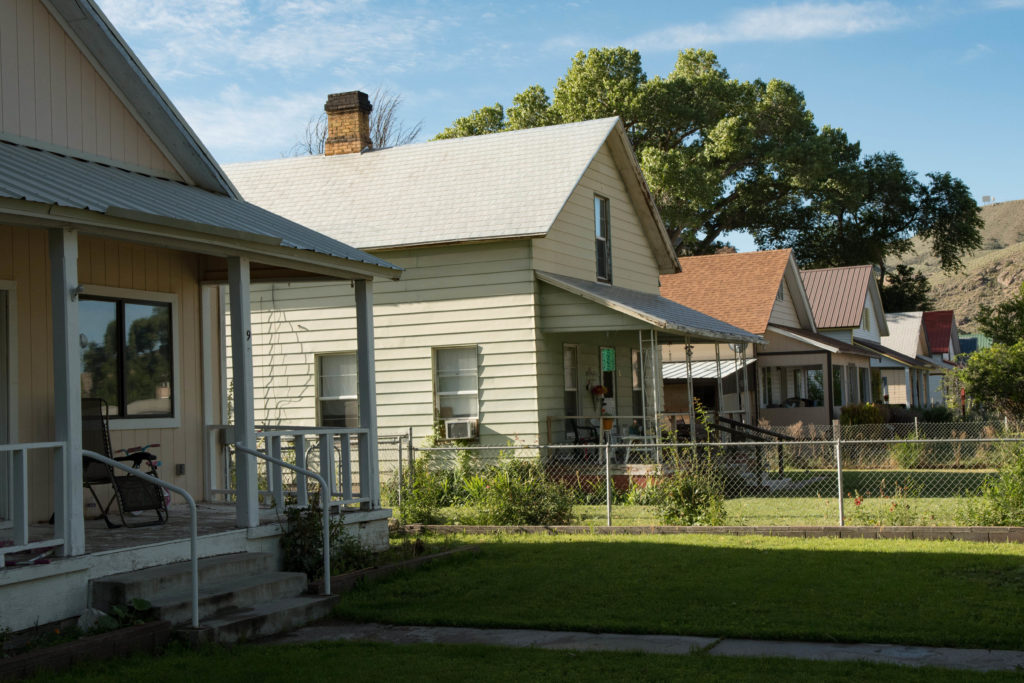 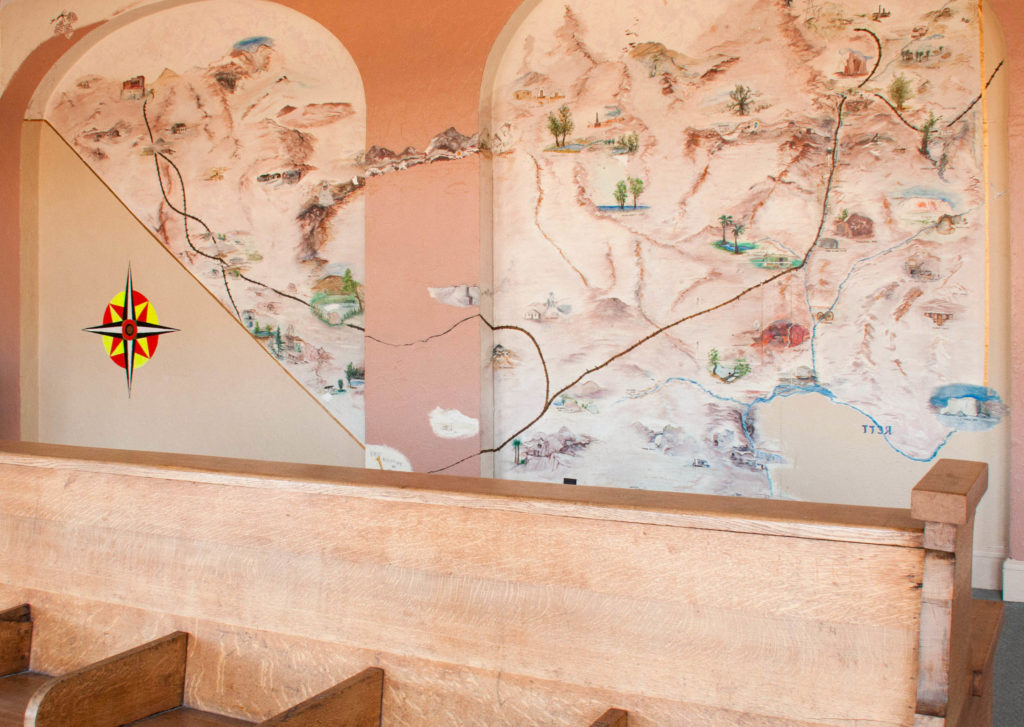 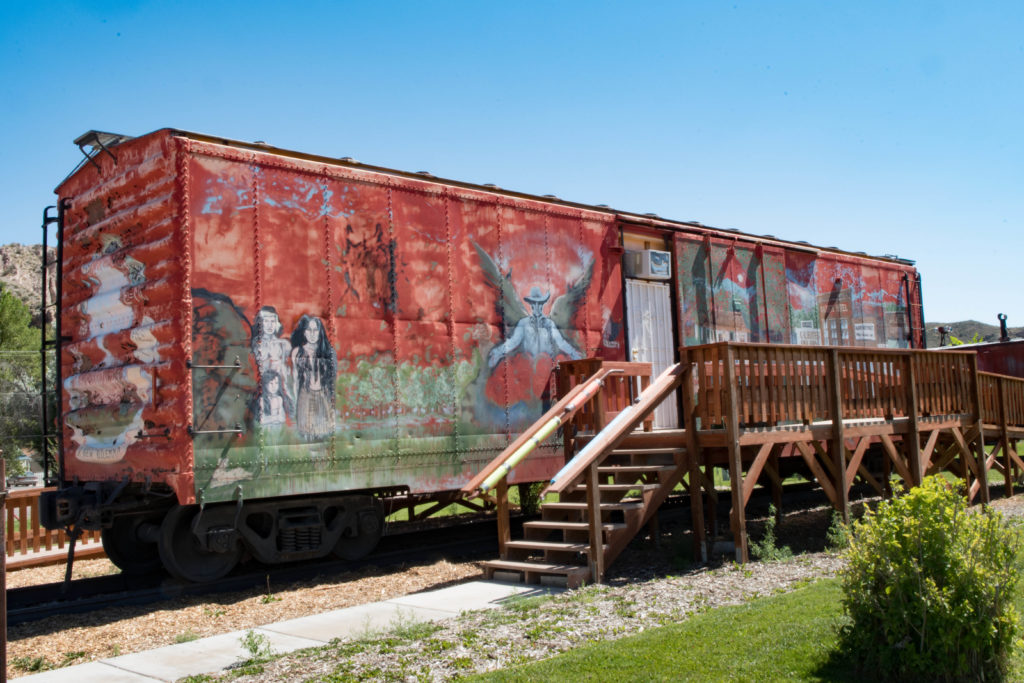 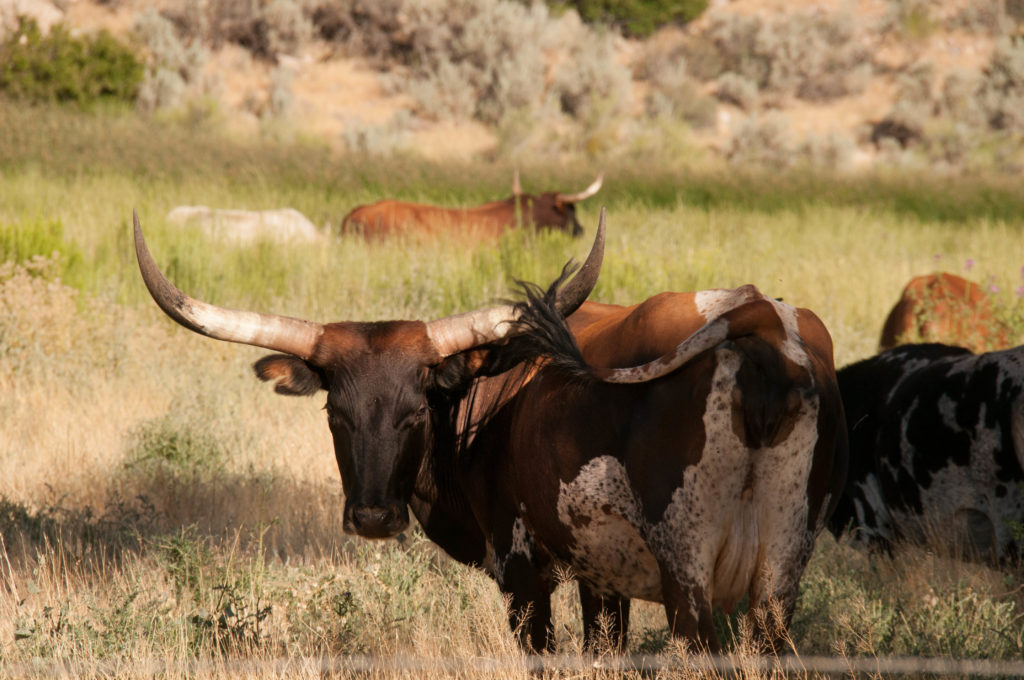 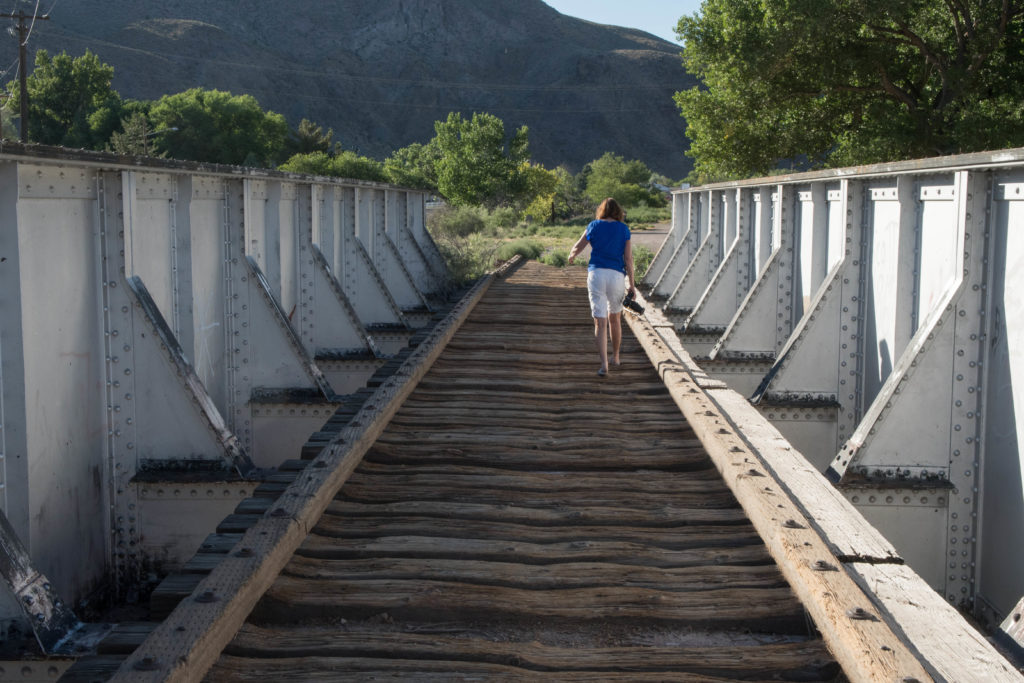 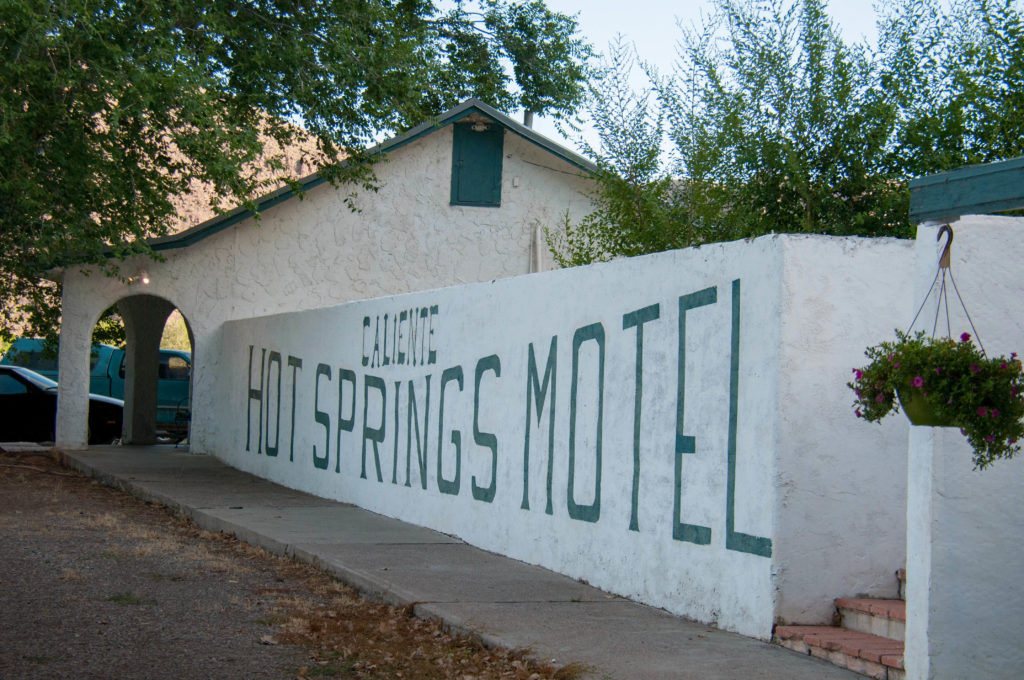 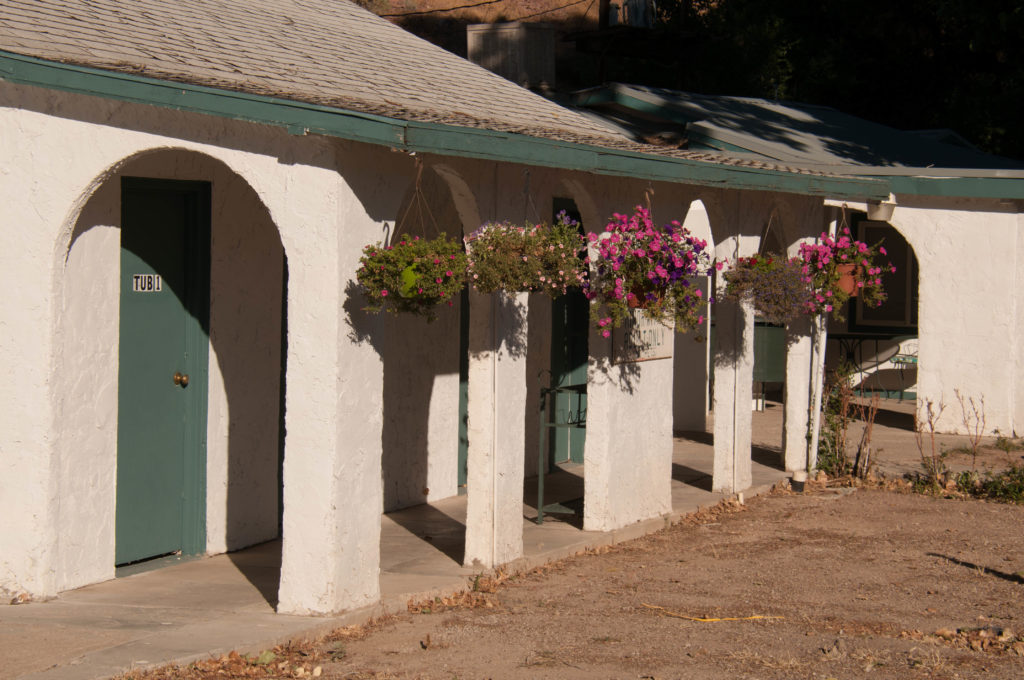 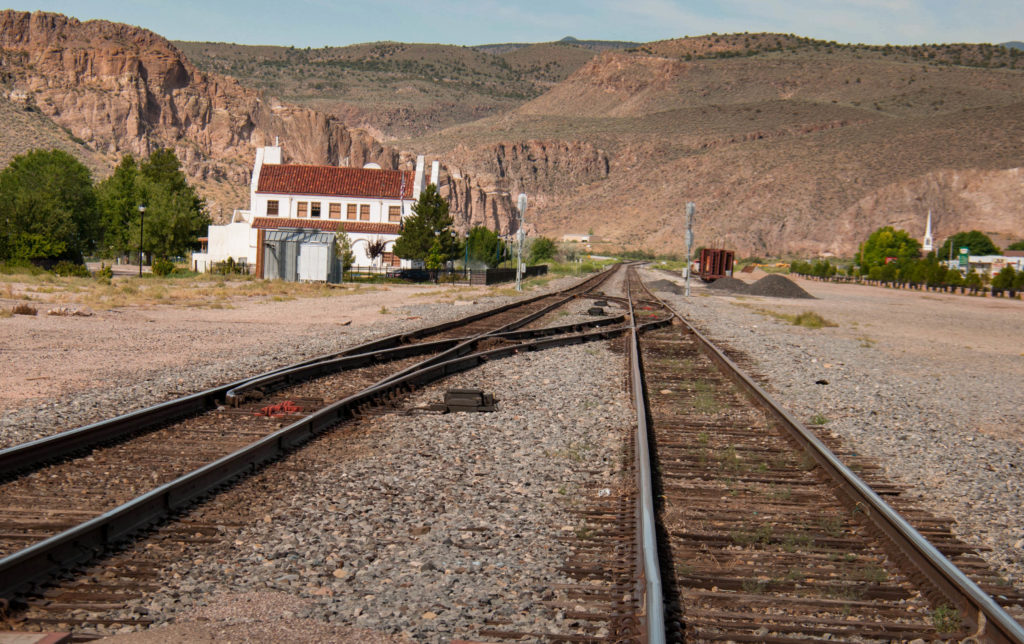 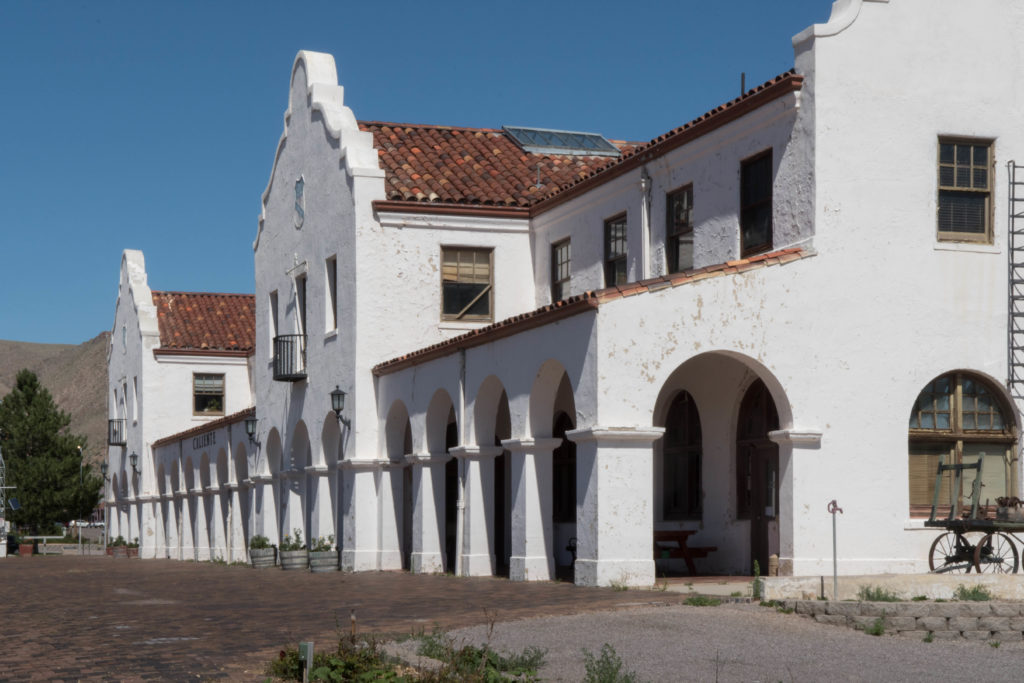 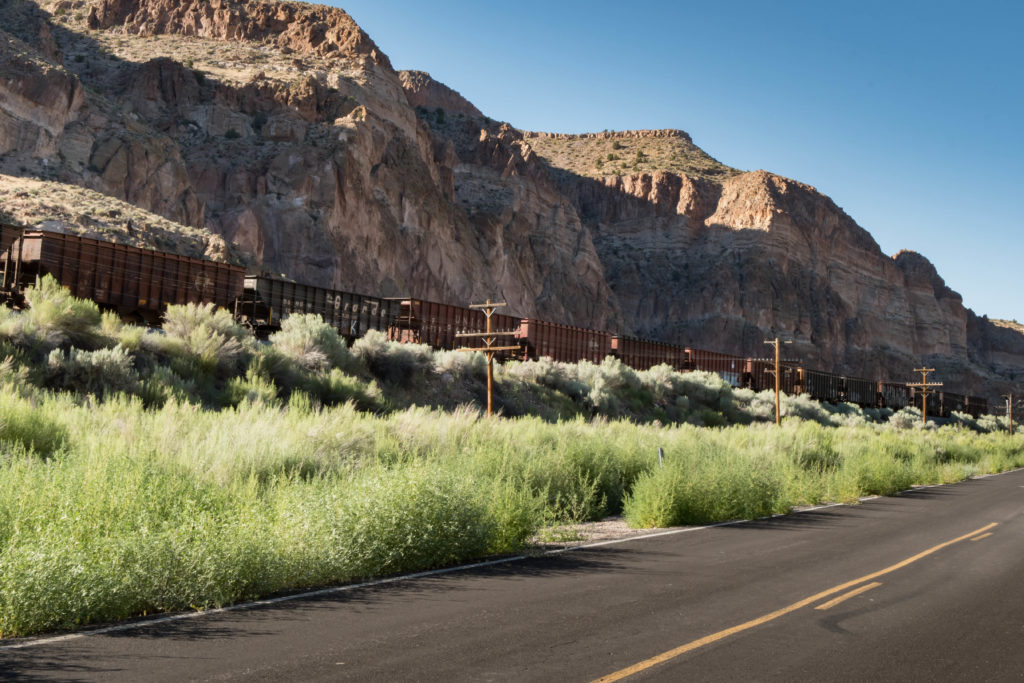 See prior features in the series: “Branding day; today’s cowboy,” “Fishing day; the B-4-Reel and a really bright trout at Otter Creek,” “History day; Virgin Town walkabout, once ‘a dreadful place’,” “Way-stop day; take a step back in time at Cove Fort,” and “Hot hiking day; Fruita, an oasis in the desert of Capitol Reef.”

Great Basin day: A beautiful "sky island" in the middle of barrenness

Grafton day; this is the setting of pioneer toils, movie making and a ghost town