ST. GEORGE — The City of St. George may have decided not to continue holding the “Virgin River Classic,” a longtime skimboarding competition held annually near the Virgin River waterfall, but local athletes didn’t let that stop them. They renamed the competition “Skimapalooza” and held it in the same spot the classic was held, expressing hope it is the first with competitions recurring annually if the city doesn’t revive the classic.

Approximately 50 people either spectated or took part in the competition near the Virgin River waterfall by East Riverside Drive.

Herb Basso, who formerly worked for the City of St. George Leisure Services division, was one of the early proponents of the event and helped establish the former “Virgin River Classic.” Basso is now a Santa Clara City council member and also owns Ka’ili’s restaurant in Santa Clara.

“I was given a challenge to find some activities that were maybe not mainstream,” he said, “kids that maybe didn’t want to play soccer and basketball all the time.”

Basso’s roots are Hawaiian, and his upbringing also played a part in his promotion of skimboarding.

“I’m from Hawaii. I miss the beach,” he said. “So I thought, let’s create a beach activity.”

Despite no longer working in leisure services, Basso was on hand to donate some of his restaurant’s shirts for the event. He said he was disappointed when he heard the city would no longer be supporting the event.

“I was kind of sad to hear the city didn’t pick it up (the “Virgin River Classic”),” Basso said, “but I am encouraging them to send a positive text or something; pictures of today encouraging the city to maybe pick it up again next year. I hope they can.”

That was a familiar refrain from many of the people on hand: hope that the city would reconsider the event and renew its support.

Competitors were divided into multiple divisions: beginners, amateurs, a women’s division and the pro division all took their turns gliding smoothly (and sometimes not so smoothly) across the shallow waters of the Virgin River. Riders did tricks off ramps and rails, catching air and trying to impress the judges with their board control. Many wiped out, crashing, flailing and splashing in the sand-filled water.

Onlookers watched from the east side of the river while the judges and competitors occupied the west bank.

Mike Gardner, considered to be one the local pioneers of the sport, said that even before the inaugural “Virgin River Classic,” local skimboarders would gather once a year for an informal competition.

“The first ‘Virgin River Classic’ was in 1996,” Gardner said. “The city has held it up until (through) last year. They decided not to do it this year, so Addison Foote and Dylan Manwaring — older skimboarders here in the area — decided to have this event today.”

Like Basso, Gardner hopes city officials will change their mind.

I think there’s always that chance. I don’t think the city makes a lot of money off of this event, just because it’s a smaller audience, a smaller group that gets together for this. Sometimes I think it might be more of a headache for the city to put something like this on. I think if there is interest with the local skimboarders and if there’s a big enough community, then they’ll probably do it in the future.

The difficulty level of the tricks rose with each division; the beginners rode primarily on flat water while the amateurs and pros utilized the wooden ramps and rails.

Spins, flat back- and front-side 180s, ollies and shuvits brought cheers to the audience when competitors performed the tricks and groans when they missed. Each division had five minutes to perform.

After the competitions were finished, the judges conferred for several minutes while raffle winners received their prizes. When the podium finishers were announced, each came forward to claim their winnings; lower divisions received prizes such as T-shirts, gift certificates to Ka’ili’s Restaurant and assorted skimboard-related items. The first place winner in the amateur division won a cash prize as did the winner in the pro division. The remaining money was split between the other podium finishers in the event.

In the pro division, the winner was Harbor Bickmore, second place was Duran Bickmore and third place was a tie between Cody Maurer and Zach Gibbs.

Event organizer and judge Addison Foote said he was pleased by the day’s events.

“The skimming was great, everybody did so well, it was really hard to judge,” he said, “but everybody had a lot of fun.”

Like Basso and Gardner, Foote emphasized the desire to see the City of St. George pick up the event again.

“The hope would be for the city to kind of reinstate the competition,” Foote said, “because it means a lot to the community and all the skimboarders here, but if not, we plan on doing this again next year.” 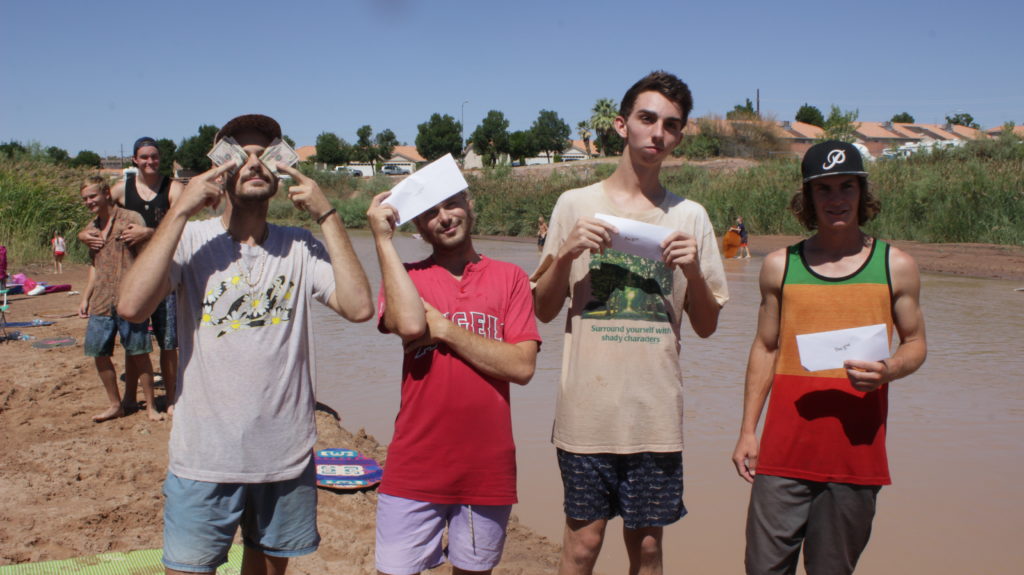 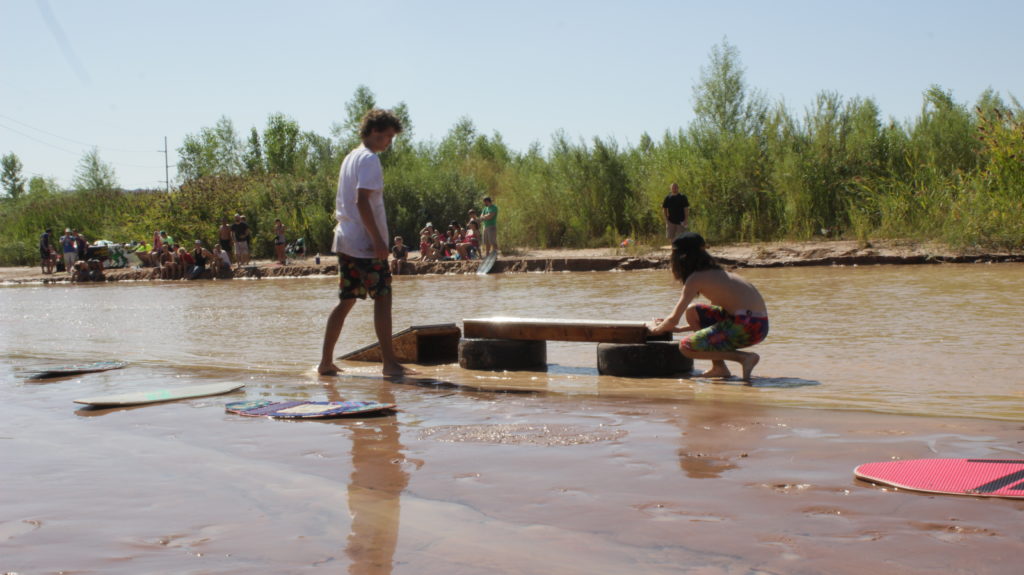 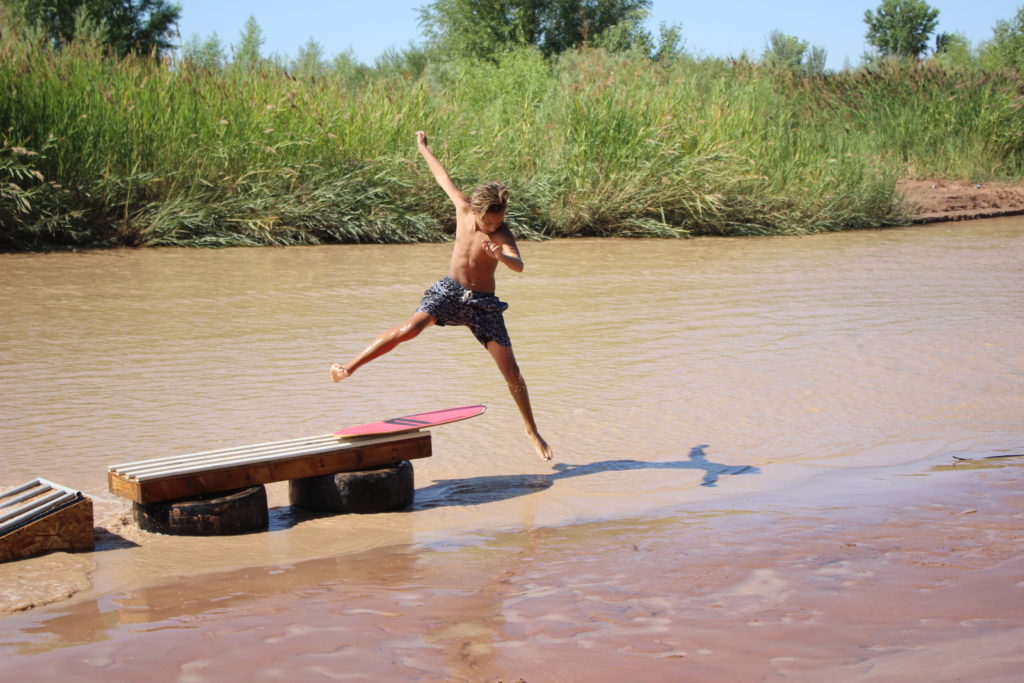 A competitor in the amateur division launches off the rail while attempting a trick during the "Skimapalooza" skimboarding competition, St. George, Utah, Aug. 13, 2016 | Photo by Don Gilman, St. George News 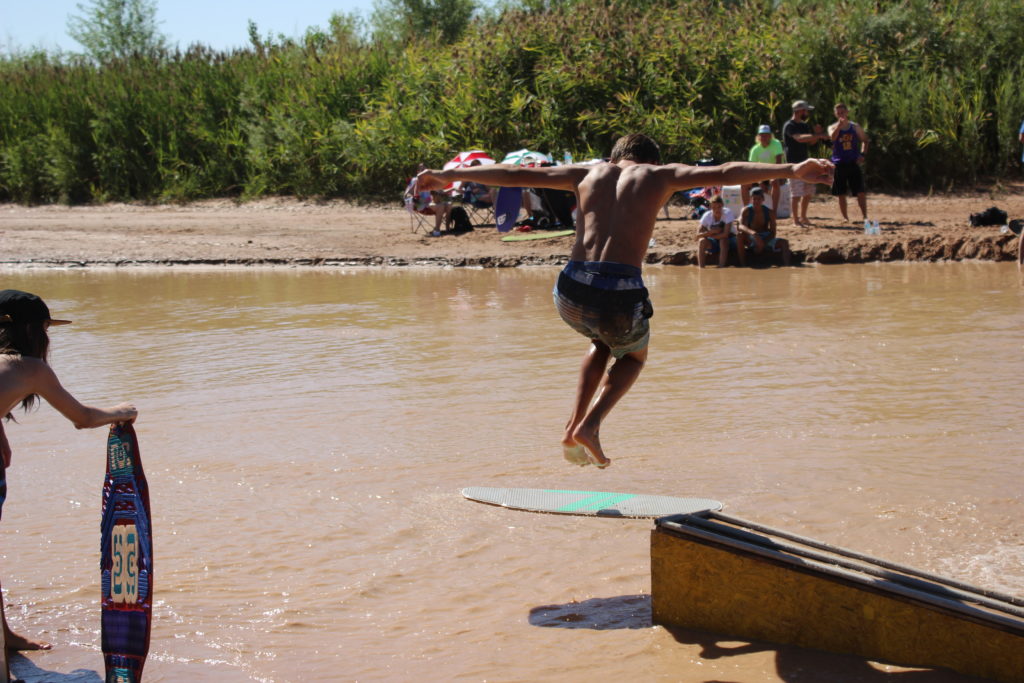 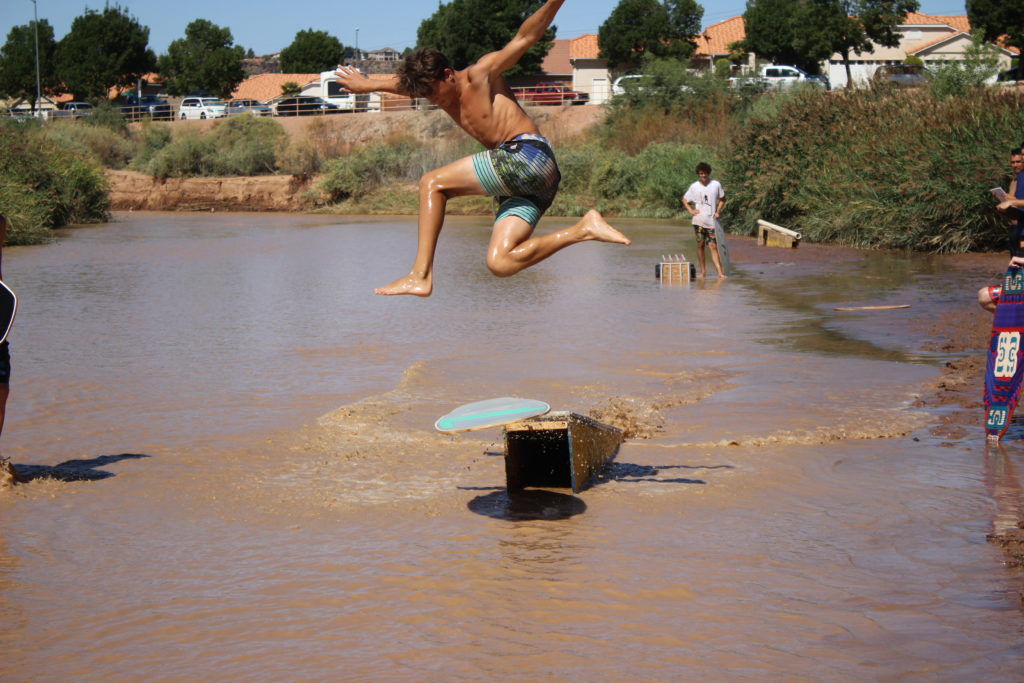 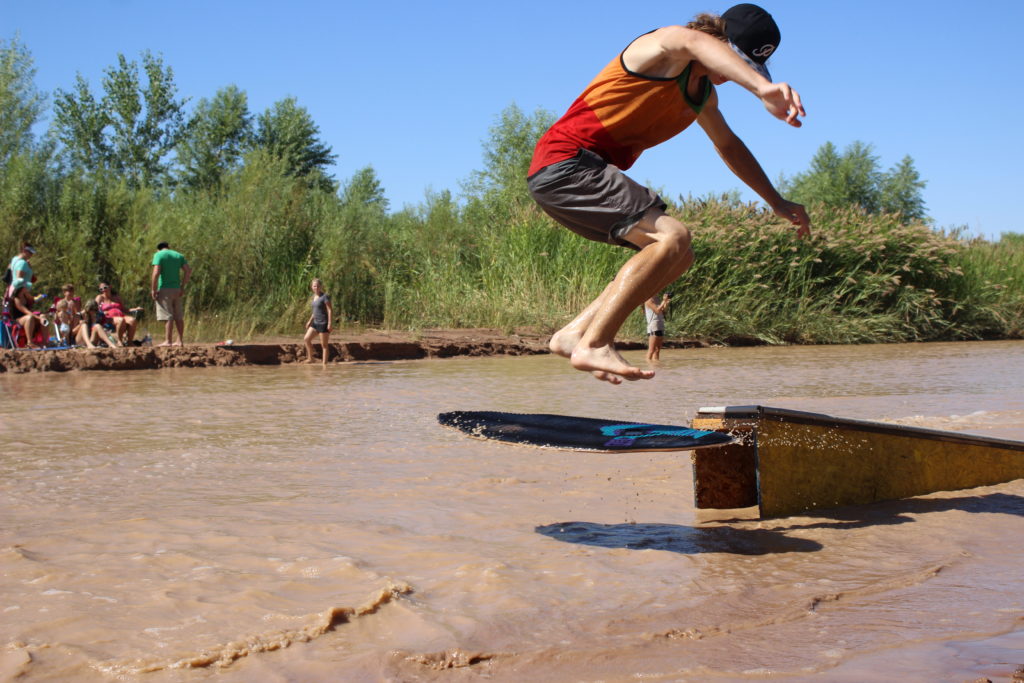 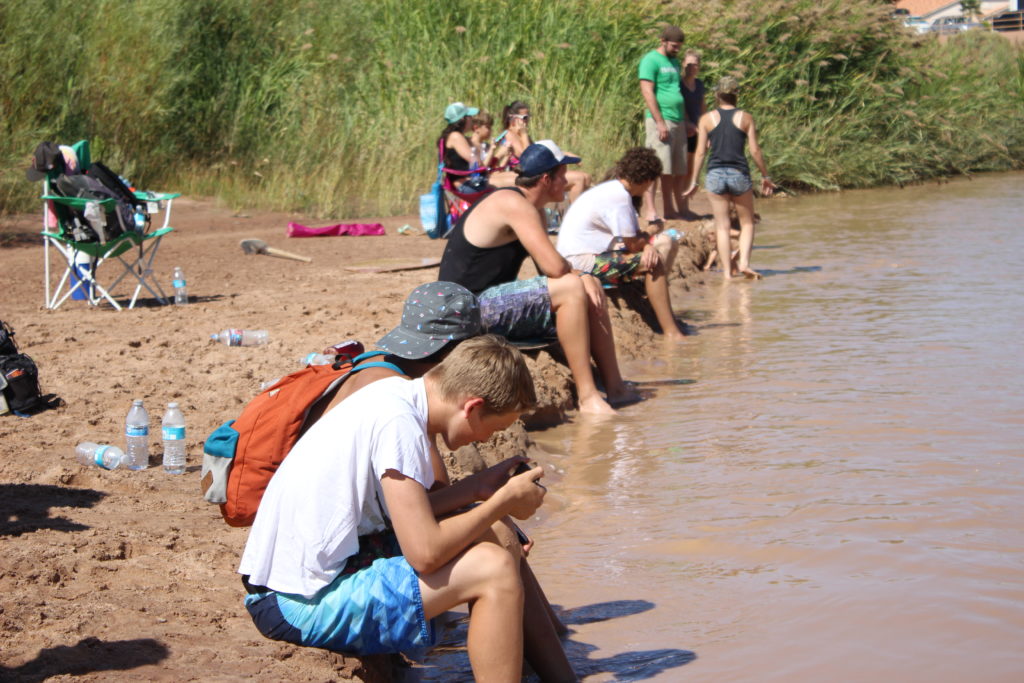 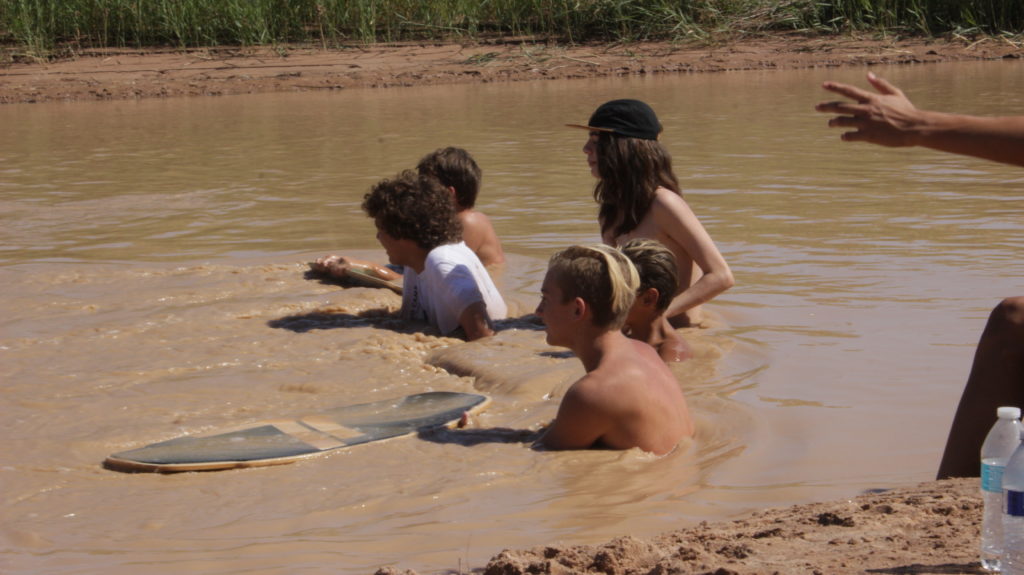 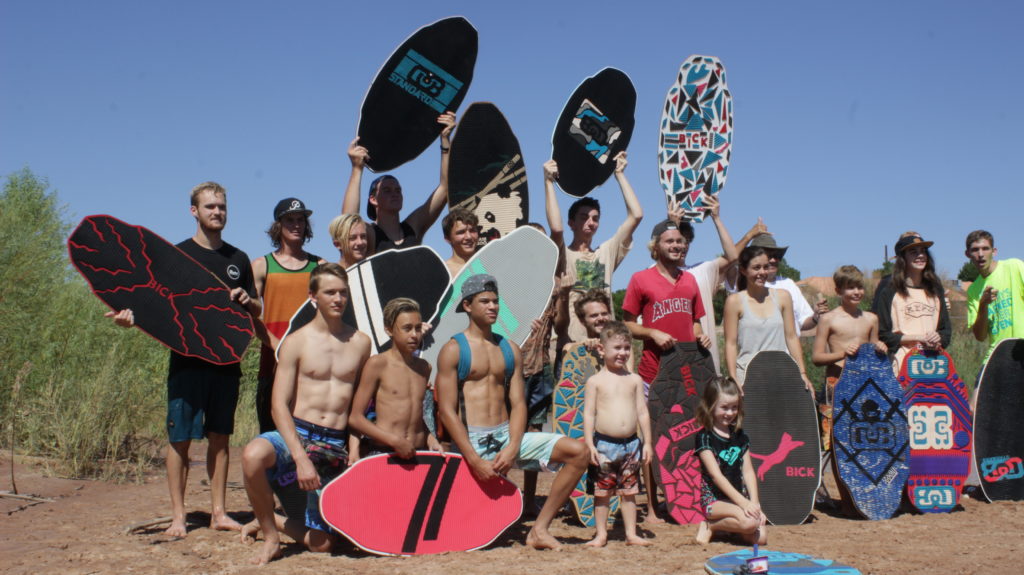