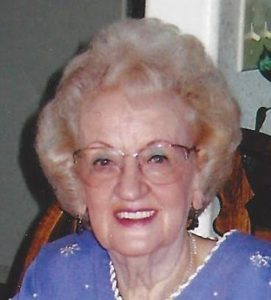 Doris Mae Bradford Henion passed away quietly in her sleep at the Brookdale Southgate Assisted Living Facility in St. George, Utah, on Tuesday, Aug. 9, with Penny, her beloved orange cat by her side. She was one month short of her 93rd birthday.

Born prematurely on Sept. 20, 1923, in San Pedro, California, the second of three children of Elgie James and Verda Carol Godwin Bradford, Doris started life weighing only 1.5 lbs. with little hope she would survive. But with the tender care of her mother who used a shoebox and a warm kitchen oven as an incubator, Doris grew to be a strong, healthy child.

She attended school in San Pedro, California, and later in Portland, Oregon, where, after graduation from high school she took a job at the Swan Island shipyards during World War II. She had a beautiful singing voice, and at age 18, she competed for – and won – the title of “Sweetheart of Swan Island.” Although her father nixed the idea of his daughter pursuing a career in show business, she continued throughout her lifetime to sing whenever the opportunity presented itself.

At age 19, she met a handsome soldier on a bus ride home from work, and three months later on June 26, 1943, she married U. S. Army Sergeant Dexter LeRoy Henion from Randle, Washington. He passed away on June 17, 2008, just 10 days shy of what would have been of their 65th wedding anniversary.

Doris was employed for much of her life. A year after the war ended and Dex came home from the Pacific theater to his 18-month-old daughter, Linda Carol, his young bride gave birth to a son, Laurence David Henion.

When Larry started school, our mother took a job as a bank teller, where for many years she maintained an almost legendary, perfect daily record for balancing her cash drawer – then she became interested in the new industry of home party sales. For nearly a decade, she was a top salesperson for Coppercraft and later for Beeline Clothing where she won nearly every award both companies gave to their top salespeople. She also earned an impressive income for a woman in the decade of the late-1950s and early-1960s.

Doris was also an amazing seamstress and tailor, beginning at a very young age to make her own clothes, and later sewing for her husband and children. During more than 20 years when she and Dex square danced several times a week and on numerous cruises with their friends, she designed beautiful matching outfits for herself and her dance partner. She also created square dance outfits for many other dancers, earning high praise for her workmanship, as well as filling her legendary “shoe box under the bed” with cash. In addition to sewing and square dancing, she excelled for a number of years in ceramics, creating beautiful works of art for her own home and for friends and family members.

She is preceded in death by her husband, Dexter Henion; parents, EJ and Verda Bradford; her only sister, Mildred Jean (Mickie) Parker; and her only brother, William Keith Bradford.

The family wishes to express a sincere thank you to those wonderfully patient caregivers who watched over her for the last 1 ½ years of her life at Brookdale Southgate Assisted Living Center in St. George, Utah; her square dance friends who she considered her best friends ever; and to Dave and Janene Bills, her bishop and visiting teacher, from The Church of Jesus Christ of Latter-day Saints in Corona, California, who regularly reached out to help her after Dad passed in 2008.