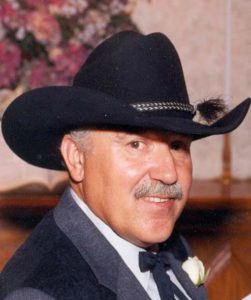 Lucky was born Jan. 25, 1950, in Salem, Oregon, to Richard Lewis and Ione Ruth Zavodsky Morris. He moved to attend Catholic high school in Eugene, Oregon, in 1968. Lucky joined the U.S. Navy and proudly served for four years as a submarine sailor working as a diesel engine mechanic. After his services with the U.S. Navy, he returned to Oregon in 1972, where he pursued favorite interests, which included river rafting, fishing, motorcycles, classic cars, horses and the rodeo.

Lucky married in the early ’80s and became a proud father of three daughters. He moved his family to St. George, Utah, in 1996 and worked as an auto and heavy truck serviceman, and the last six years worked as an A.S.E. certified technician for Wal-Mart’s transportation fleet.

Lucky married Cathy L. Isom in October 2002, whom he considered his best friend.

He was a loving husband, father and grandfather and a caring and generous friend to all.

His grandchildren knew him best in his cowboy hat and boots and referred to him as a “real life cowboy.” His friends would describe him as the man with a fishing pole in one hand and a wrench in the other.