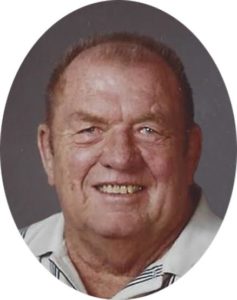 Ivan was born May 22, 1933, in Redmond, Utah, to Morving and Olga Andersen Larsen. Ivan graduated from North Sevier High School where he played baseball and spent many nights and weekends hunting and fishing . . . and getting to know Redmond’s local sheriff on a personal basis.

Soon after high school, Ivan joined the Air Force, where he was trained in aircraft maintenance. He had the opportunity to work on the F4s which were the same famous Thunderbirds.

Ivan met the love of his life, Sherin Leavitt from Santa Clara, and they were married on April 29, 1961, in Santa Clara, Utah. They have been married and in love for 55 years where they have been best friends and companions.

During his early years in Redmond, Ivan was known for his blonde hair, blue eyes and his love for the outdoors. He would spend many hours fishing at Redmond Lake, Salina Creek, Johnsen’s Reservoir, Fish Lake, Koosharem Reservoir and anywhere else he could drop a line. Ivan also liked hunting and has many experiences in the mountains around his home town. He was often found up Cedar Mountain, Monroe Mountain, Gooseberry and anywhere in and around Molly’s Peak up Salina Canyon. Ivan was an exceptional hunter and often was found harvesting deer and elk . . . sometime even in season. Ivan also enjoyed skiing and driving around in his black and white ’59 Chevy Impala.

After Ivan married Sheri, they made their way up north to Salt Lake City, where Ivan worked for many years at Cudahy Bar S Foods and then Hill Air Force Base where he retired. Early in his married life, he was stationed in the Philippines, where he often sent trinkets home to his wife and three boys.

During their time in Salt Lake, Ivan raised his family in Rose Park but would often bring his boys down to Sevier County where he and his boys could walk the same trails and mountains that he walked as a child. He loved fishing with his three boys, and we were all very proud of his consistent “fourth place finish” on many of those trips. He often spent his time untangling lines, loading rifles, carrying shotguns and on at least one occasion, removing a worm-covered fish hook from his beloved wife’s lip.

He was always there for his family, whether it was in the outdoors, sports, school events, scouting or church activities. Ivan was loved by all who knew him as he befriended everyone he met.

Later in life when age prohibited him from enjoying the outdoors, he loved following his favorite sports teams, which consisted of any team his grandchildren played on and the Utah Jazz. He enjoyed taking his day trips to Mesquite with Sheri where they developed long lasting friendships with many he come to know and love who knew Ivan by one name: “Geronimo.” He loved having visits from his children and grandchildren in St. George and enjoyed sitting at the kitchen table every morning catching up on everyone’s life while putting ketchup on every breakfast item both hot and cold.  He was truly a great son, husband, father and grandfather but most importantly a dear friend.

Ivan is also survived by his sister Betty Dumas and sister-in-law Kathy Larsen. Ivan is preceded in death by his parents, Morving and Olga, and brothers Elwood (Stella), Don and Eva (who died at birth).

Ivan is also survived by his dog Lucky and preceded in death by his trusted canine friend Chipper.