The drive from St. George to Capitol Reef National Park takes three hours and 30 minutes; 216 miles. While passing the stretch of small towns, Loa, Lyman, Bicknell, Teasdale and Torrey, consider them an option for your bed or breakfast. They all have a chink of history; Bicknell for example, is a town where you can buy authentic Indian art and jewelry. And Torrey is home to the Tour of Utah for its second stage of bicycle race in August.

The town of Torrey has placed an old out-of-service white sheriff’s car at the edge of town as a reminder to slow down through small towns. At the wheel sits a dummy with full facial features including a mustache.

The first view of Fruita is a sudden, intensely green little valley, with opulent orchards and an unusual grassy park. Capitol Reef National Park surrounds Fruita, a little oasis settlement. The temperature is perfect for growing fruit and nut trees with a relatively long growing season and abundant water.

First time visitors are encouraged to make Capitol Reef National Park Visitor Center their first stop. The park rangers always suggest the 25-mile scenic drive on paved road with pullouts that allow you to stop and take it all in. The entire Scenic Road is especially photogenic late afternoon or sunset. That is when photographers get the sensuous light on the multicolored sandstone. The scenic drive begins just past the Fruita campground, the ranger said.

Capitol Reef was named for a ridge of white domes and cliffs of Navajo Sandstone. The reef appears somewhat like the U. S. Capitol building. The rugged cliff that geologists call “Waterpocket Fold,” is an ancient buckle in the earth’s surface which defines Capitol Reef National Park.

We drove past some massive Fremont cottonwoods, with branches gnarly and tangled and trunks with exaggerated layers of bark. “We will be back,” I told the trees as we drove on to the campground passing the lush orchards, suggesting a brief Eden.

Luckily, a campsite opened up as we pulled into the campground and passed two cars driving out. We pitched our tent and unloaded our camp stove onto the picnic table, marking our site.

We visited Fruita’s settlement and little Mormon schoolhouse and were touched as we thought of the Gifford children and others learning to read and write with such primitive implements.

The National Park Service constructed a boardwalk making it easy to photograph the ancient Fremont petroglyphs.

Paved roads arrived in 1962. Yet, the park has no lodge or restaurants. But the Gifford Homestead, which includes a House Store and Museum is a charming little piece of Utah’s history. It not only sells tantalizing treats but is one.

Shirley Torgerson, director of the Natural History Association, should be thanked for the pies and cinnamon rolls. After attending a national convention in Williamsburg, Virginia, Torgerson was inspired to ask the National Parks society if she could set up the Gifford home for a demonstration site purposing to understand the Mormon settlement of the Fruita valley. Torgerson obtained permission and help from the state Parks Service and carried out her dream.

The farmstead includes a barn, smokehouse, garden, pasture and rock walls. The Gifford farmhouse and store opened to the public June 1996.

The settlement of Fruita was small, never more than eight or 10 families lived there at any one time. Fronted by miles and miles of desert along a wild river, Fruita must have been one of the most difficult places to create a community. The Gifford family lived there for 41 years. The Gifford farmhouse with its seven rooms depicts the typical frugal nature of rural homes in the early 1900s.

Young women donning pioneer aprons not only serve pie but answer questions about the museum. The store displays and sells some unique handmade items made by local artisans. The rolling pins and wooden flutes are made by Vance Morrows of Torrey.

The Gifford home becomes a perfect meeting place after a stimulating hike. Enter to whiff tantalizing aromas and choose an individual-size fruit pie, hot cinnamon roll or ice cream to cool you.

As the sun sank behind the massive ridge it produced a photographer’s dream sky. We focused on the barn with a perfect backdrop until there was no more light.

When we returned to our camp we lay on our sleeping bags and listened to the Fremont River gurgle past the camp and waited for the night to cool and sleep to come. The sky began to blacken and as if someone flipped a switch the stars turned on and soon formed a streak of light. A nearby tree silhouetted. I wanted to get up with my camera but I closed my eyes.

We awoke anxious to get out into the piers, monoliths and “baldheads” so we turned our backs to the orchards and our faces to the ridge. The grassy campground clean and tidy by the efforts of man had been tamed. We came for wild country to renew ourselves in the desert. While still on pavement and alongside the road, we viewed what I thought were the spines of a lizard; but no, our trail guide said the formation is named the Castle. We looked down onto sage dotting the red earth and Pectol’s Pyramid rising into a backdrop of cerulean sky and summer cotton clouds.

We began walking the foot trail after a short drive between tall cliffs of beautiful Capitol Gorge and where the road dead-ends. We had a sense of discovery around each bend, new vistas thrilled us but we trudged on adding our footprints to the thousands in soft sand.

The hike was an easy 2 ½ mile round-trip walk, until the very last 0.2 mile that ascended rapidly. The amazing Hickman Bridge with its 133-foot span soon popped into view. The best angle was from beneath, we concluded, and we climbed down several feet to capture it with our cameras.

As the day speedily heated up, we descended to a slickrock table formation and lunched on sandwiches and apples. My CamelBak hydration backpack still held a little tepid water. I sucked in two swallows and then air.

Now that we had conquered the hike that began in the coolest part of the day we would take our time on the return trip to shoot some interesting formations.

My husband, Jim Lillywhite, headed off into a pocket and I focused on some unusual stems growing in the sand. The silvery fluff ball seed heads shined in the afternoon sunlight. With the beauties of nature’s art fresh on my mind, I asked how would I paint this scene? What medium would I use? I must have stayed engrossed with this plant in the sun for at least 20 minutes.

I felt the sweat dribble down my back. A salty trickle stung my eye. I wiped the sweat from my forehead, too late for my eye. With blurred vision I straightened my posture. The ground seemed to rise up to meet me.

Where could I rest? The shade had all but disappeared. I took a few steps toward the solid stone wall and leaned my back against its bit of coolness. Was my hiking partner behind me or in front, I couldn’t remember.

The car and safety couldn’t be far off; this was a short hike, remember? Nauseous feelings along with panic overcame any rational thought.

“Are you OK?” I heard my husband’s voice.

“I just feel a little dizzy,” I said.

“Drink some water. You look flushed.”

“I didn’t want my pack to be heavy so I only filled it half-full.”

Jim groaned and put the rubber hose of his CamelBak in my mouth. “Drink,” he commanded.

He took my camera and slung it around his neck and hooked me up under his free arm. We walked.

The streaks of weeping lines ran down the rugged walls, reminding me that the uncontrolled part of earth still surrounded us. But our reunion with our car and the parking lot were now a welcomed joyful sight. 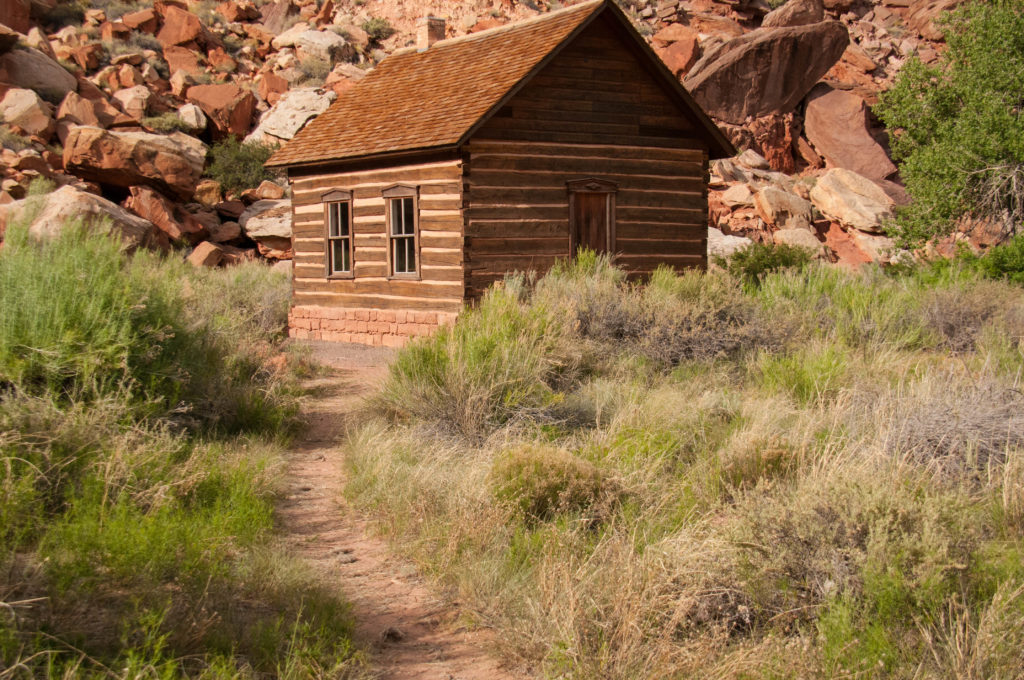 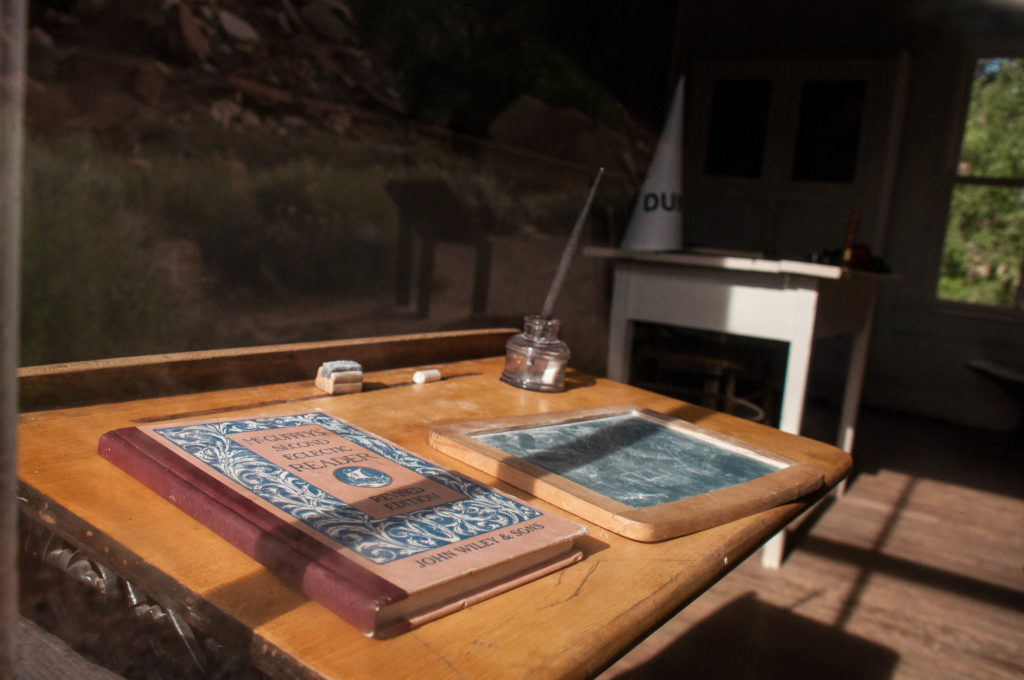 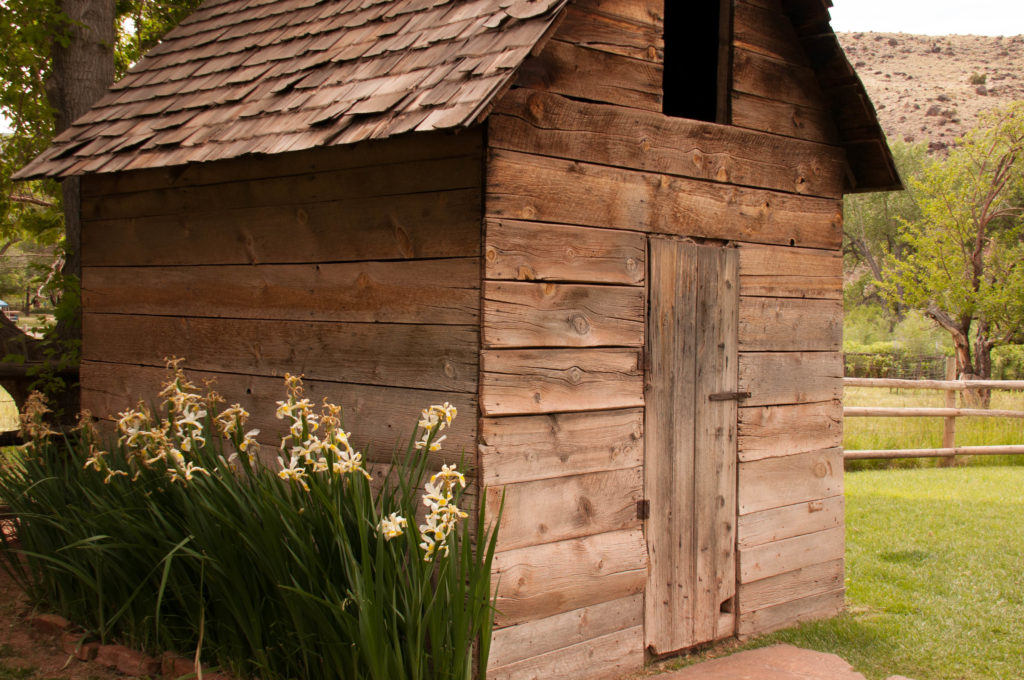 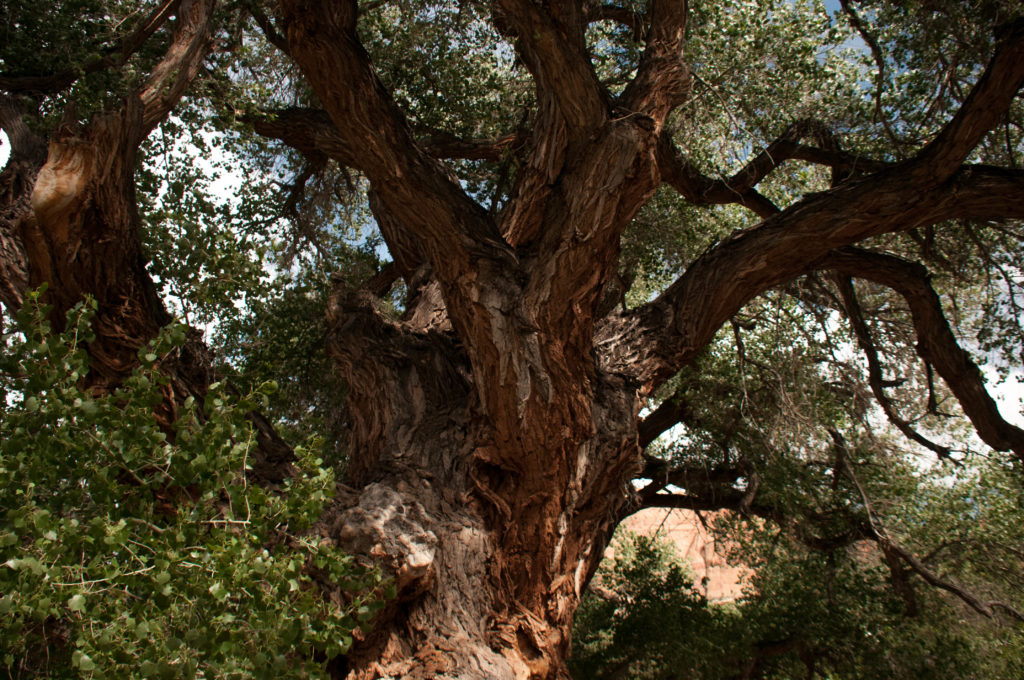 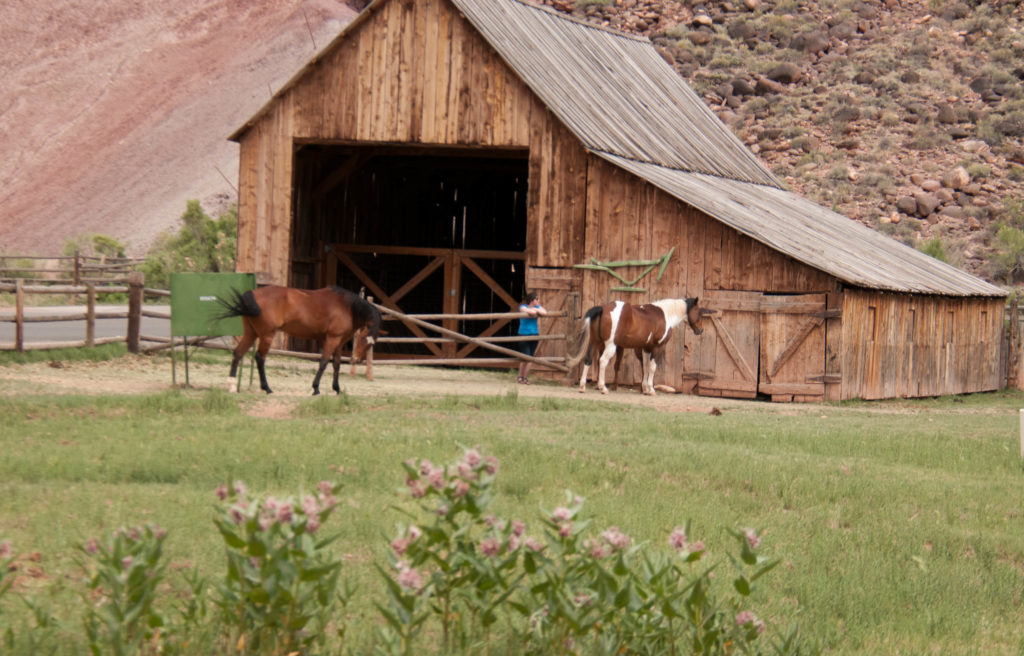 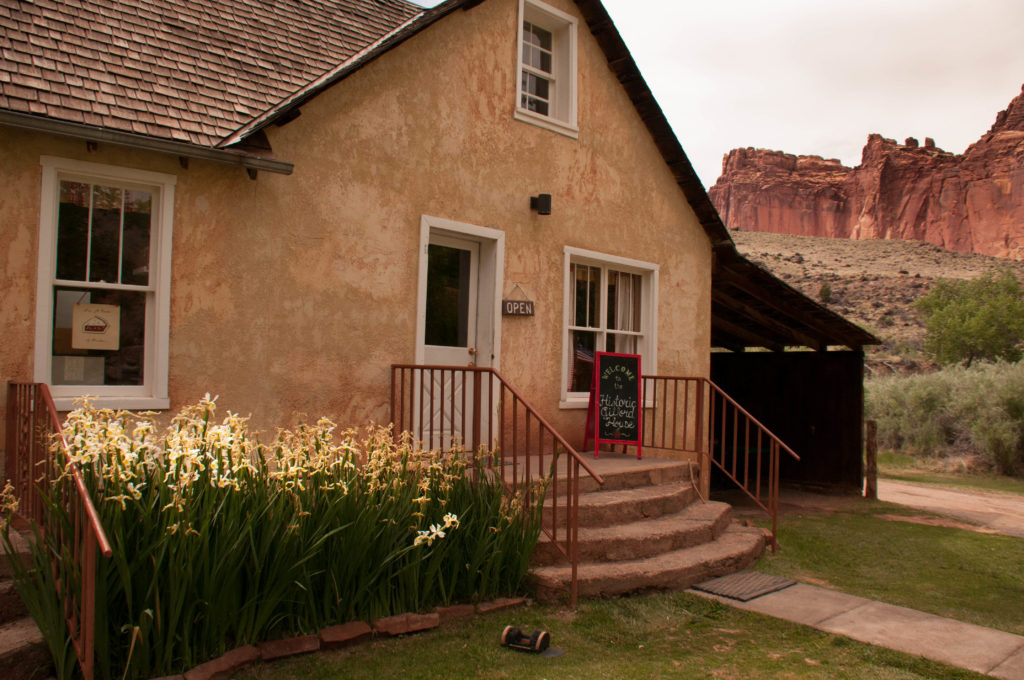 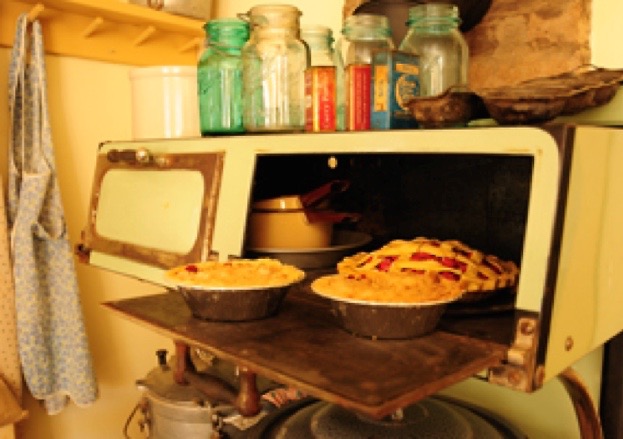 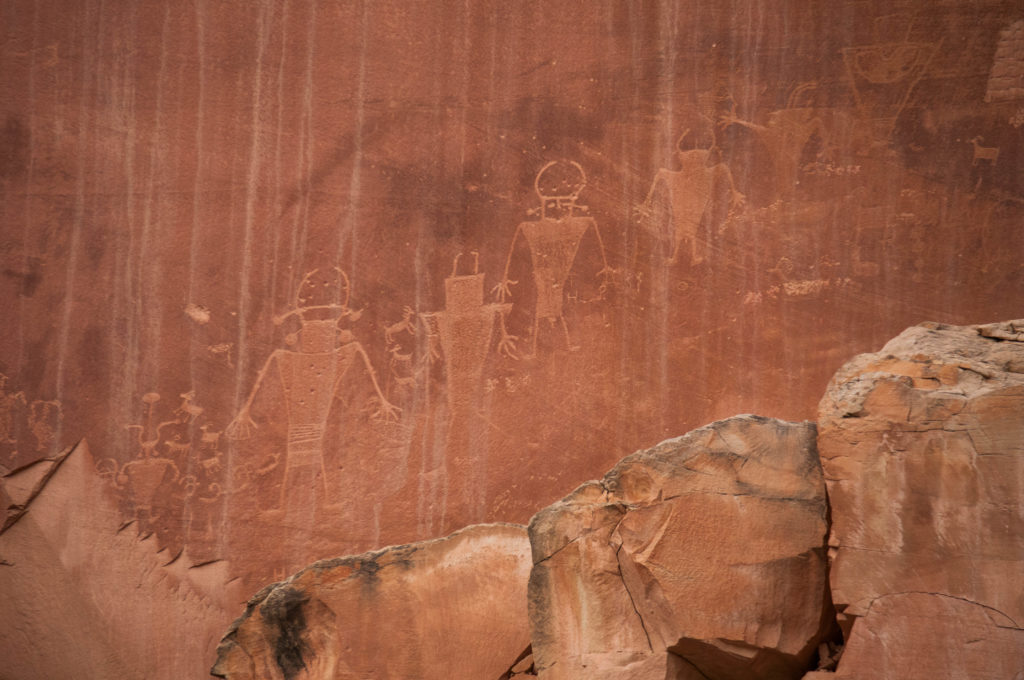 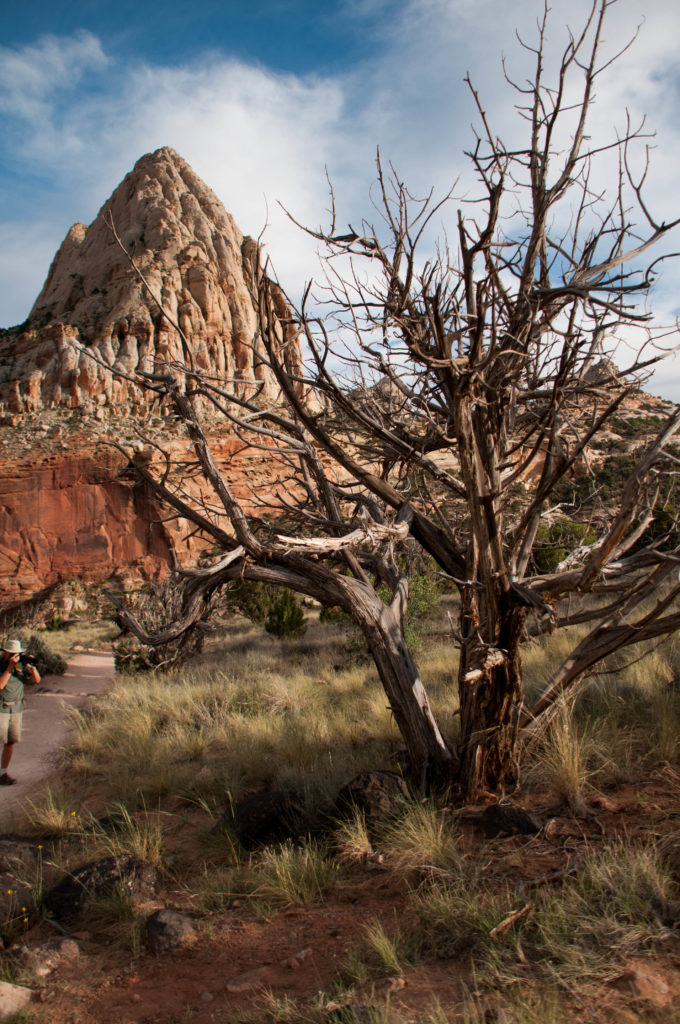 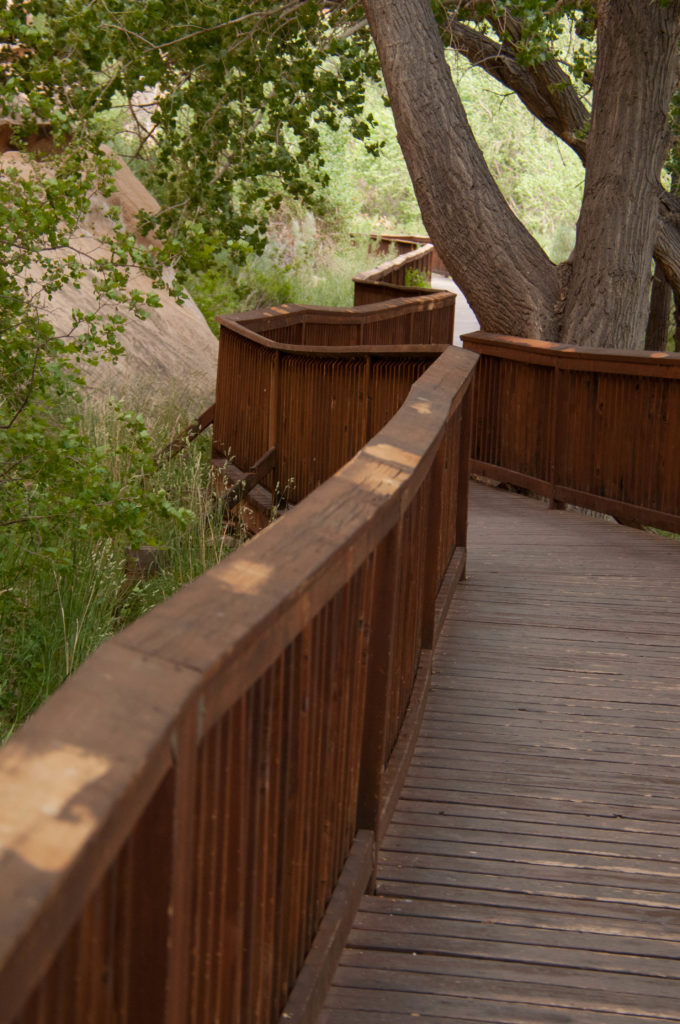 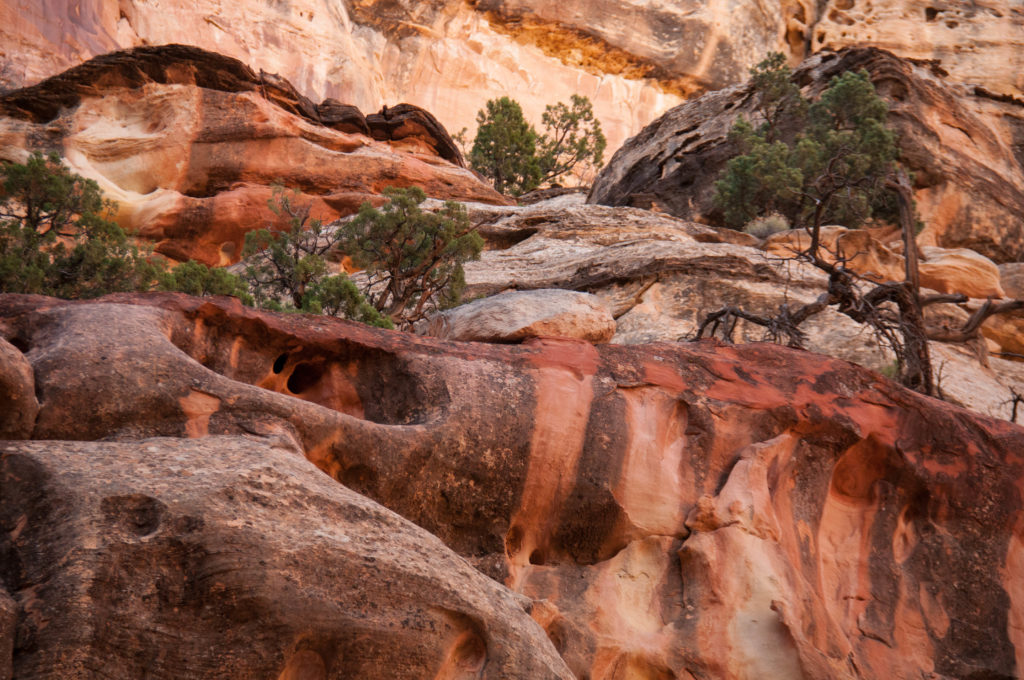 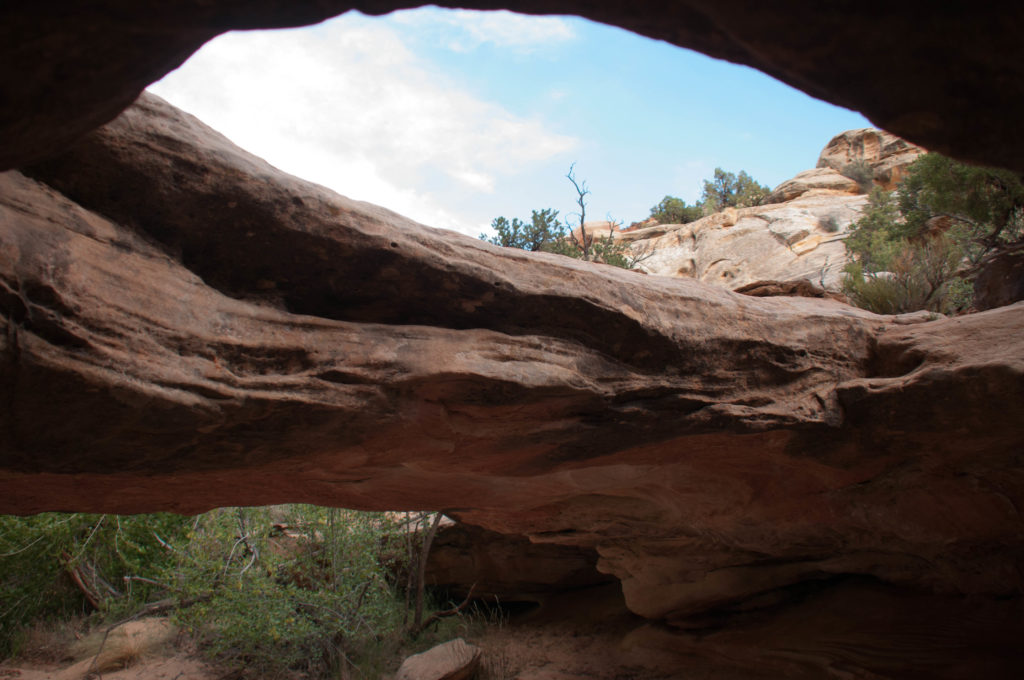 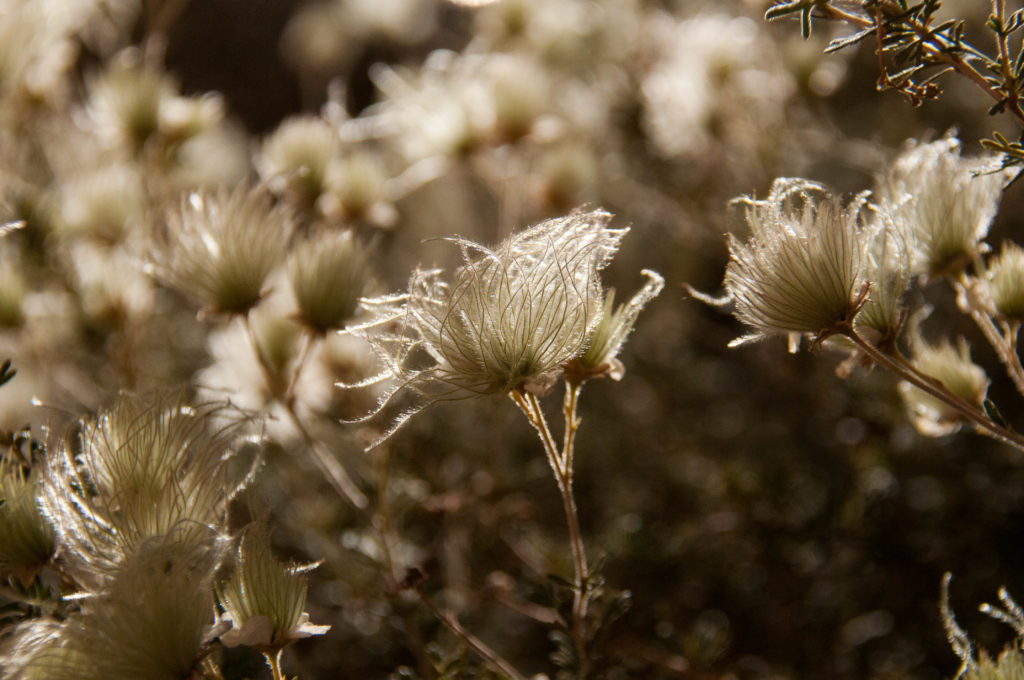 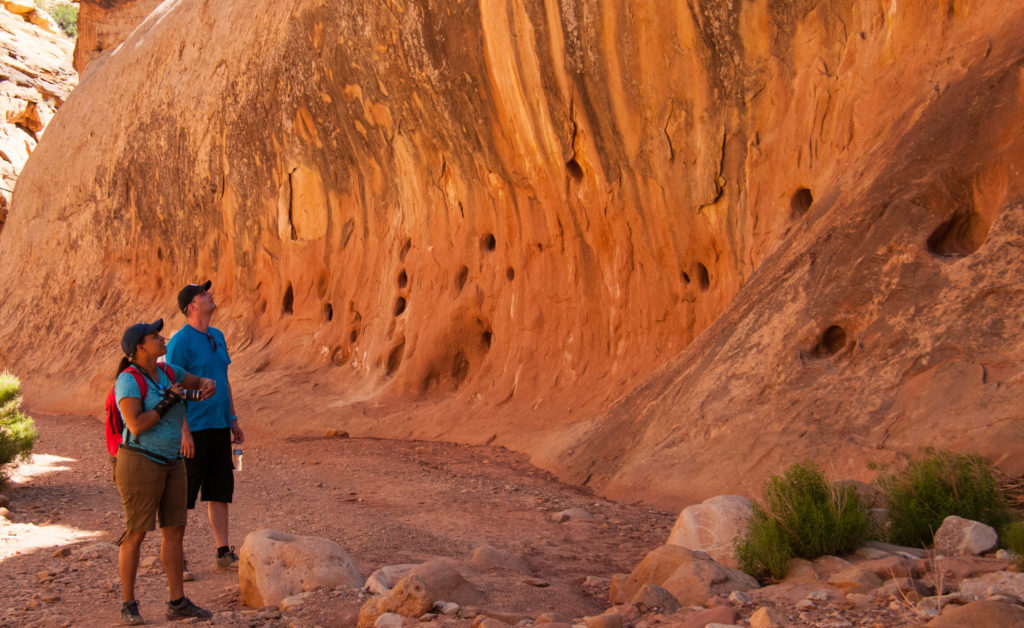 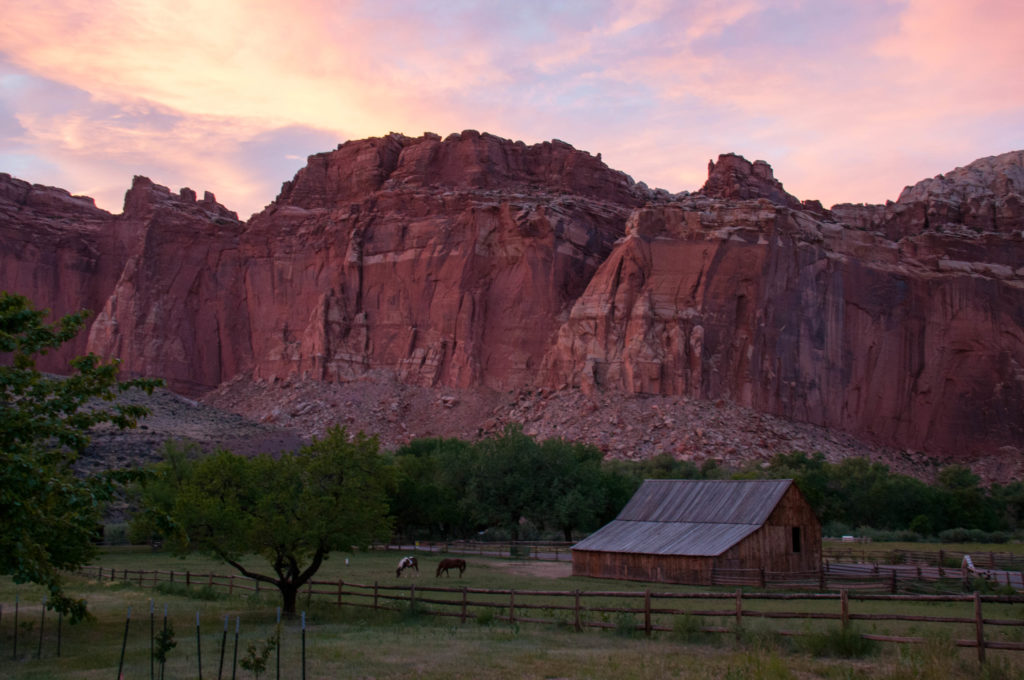 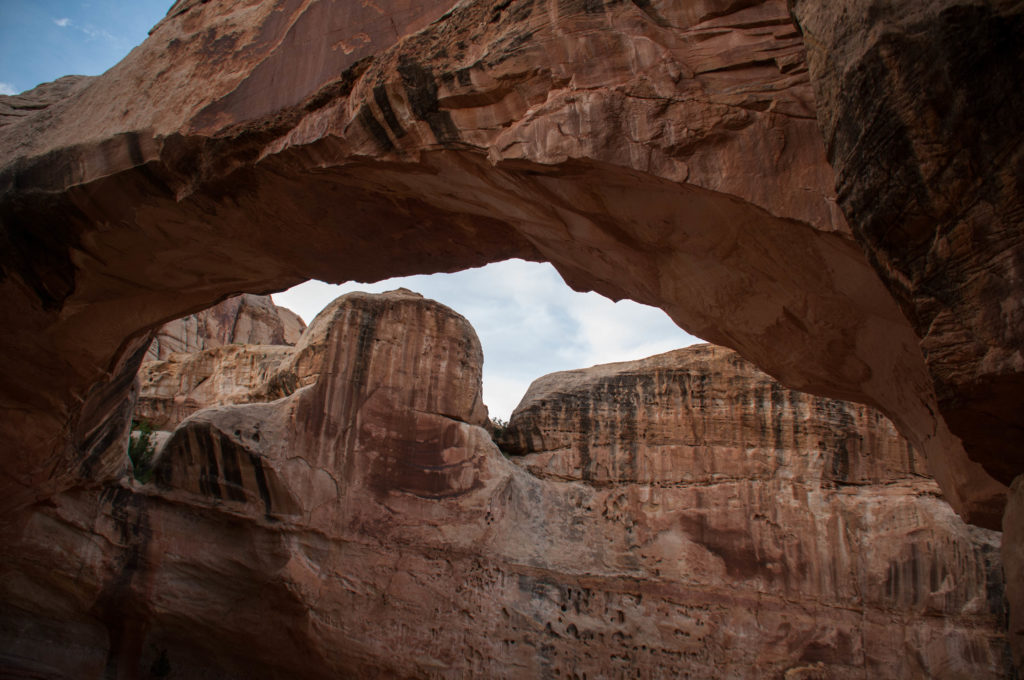 The campground does not take reservations. On busy summer weekends it is still possible to get a great camping site. Just show up around checkout time which is 11 a.m. The nightly fee is $20 or $10 for Golden Age Pass holders.

The 200-acre Fruita Rural Historical District is listed on the National Register of Historic Places.

See prior features in the series: “Branding day; today’s cowboy,” “Fishing day; the B-4-Reel and a really bright trout at Otter Creek,” “History day; Virgin Town walkabout, once ‘a dreadful place’” and “Way-stop day; take a step back in time at Cove Fort.”