WASHINGTON CITY – A barbecue fundraiser was held Saturday at Zion Harley Davidson to help with final fundraising efforts to pay for a monument that will contain the names of Vietnam veterans both living and deceased.

A project years in the making, the monument is set to be unveiled Sept. 10 at 10 a.m. in a ceremony at the monument’s permanent home: Zion Harley Davidson, 2345 N. Coral Canyon Blvd., Washington City.

Saturday’s barbecue acted as one of the final fundraisers to pay for the monument which is still accepting names of Vietnam veterans. Currently there are about 300 names that will be engraved on the monument, said Judith Cooley, who is spearheading the efforts to see the monument come to fruition.

Cooley’s husband, a Vietnam veteran, passed away due to complications related to exposure to Agent Orange, also called Agent Orange poisoning, the chemical defoliant used by the United States military as part of an herbicidal warfare program during the Vietnam War.

The monument was inspired in part by her desire to honor her husband, Cooley said in a previous interview with St. George News.

But Cooley’s love for veterans extends beyond remembrance of her late husband and she has been a tireless leader in the efforts to erect the monument.

For Cooley, the monument is more than just a memorial with names, she said.

“The Vietnam veterans were treated horribly when they came home. They didn’t get the big parades. All they got was spit on and called names,” Cooley said. “And this is a way to say ‘welcome home and we do thank you for your service. This is your big parade.'”

Cooley was quick to point out that the project has had the support of several veterans organizations throughout Southern Utah and many are thrilled to see the monument in its final stages.

Ellen Nathan describes herself as the project’s angel. Nathan served on the City of St. George Veterans Advisory Board when Cooley first proposed the idea of the monument, she said, and the group asked Nathan to help Cooley in her efforts.

Nathan is a strong advocate for veterans whose husband, like Cooley’s, died from complications due to Agent Orange poisoning. She spoke fondly of her late husband who passed away Feb. 14, 2014, after suffering for years with various health conditions linked to Agent Orange exposure.

His passing came exactly 33 years to the day they met, Nathan said.

“I am thrilled to see this get done,” Nathan said of the monument. “I can’t wait until September to see the finished project. It has been two years or more since we have been at it.”

In the early stages of planning the monument, finding a suitable place – one that provided easy access for anyone wishing to visit the proposed monument – was a difficult hurdle. But then a unique idea was put forth by Dan Greathouse, president of the Vietnam Veterans of America, Southern Utah Chapter 961.

He proposed approaching Zion Harley Davidson to see if it would be a willing host site for the monument.

Both Laura Lavigne, the store’s general manager, and Zion Harley Davidson’s owners agreed that the monument would be a perfect fit for the property and a great way to pay tribute to the Vietnam veterans.

From the moment they were first approached, Lavigne, Zion Harley Davidson’s owners and staff have been completely supportive of the project, hosting numerous barbecues to help fundraise for the cause and supporting Cooley and her team in their efforts.

They do it, Lavigne said, because of their love for the veterans who served.

“I don’t think in today’s America that we appreciate our veterans, past or present, as much as we should,” Lavigne said. “So we like to support as much as we can.”

While it might seem like a tenuous connection, Lavigne said that both veterans and Harley Davidson as a brand represent personal freedom.

“A lot of the veterans, when they came home from places where they saw some things that were pretty incredible, chose to get on a motorcycle and ride and see the country that they defended with their blood, sweat and tears,” Lavigne said.

While the excitement for the upcoming unveiling is mounting, for some, the idea of having a monument dedicated to both deceased veterans and those still living was met with trepidation.

Vietnam veteran Bruce Solomon described the process as bittersweet. While most war memorials are dedicated to those who lost their lives during combat, those that sacrificed, he said, this particular monument is designed to pay tribute to those who have passed since the Vietnam War and those who are still living.

At first, Solomon said, it felt as if having his name on the monument was stealing a little bit of the recognition from those who did not live to come home. He described what some might call survivor’s guilt and spoke of how he had to come to terms with life after war.

“Life after war is a cacophony, a catastrophe of breakthroughs,” Solomon said. “And that was one of them, that it’s OK that I lived and I am almost to the point where I can say it’s a good thing that I lived because I feel like I have done some good work.”

Solomon said he has been inspired this year to celebrate this thing called living and to celebrate that he has been able to handle the aftermath of war and learn how to manage and live with post-traumatic stress disorder and channel his experiences for good.

“I can celebrate that I lived,” Solomon said, “because now I am on the other side and I’m doing some things out there which I think make a difference.”

Solomon also praised Cooley for her no-quit attitude and ability to get this monument done.

“Judith Cooley is a superstar, she refuses to be stopped. She is a Marine,” Solomon said. “It’s like love it, hate it, want to quit, doesn’t matter, go, we have an objective … and she just kept going.”

The barbecue featured music provided by the band Classic Country, drawings for prizes and a good meal.

Cooley said at the event that they had reached their fundraising goal for the monument and that any additional money raised will go toward the purchase of benches that will be placed near the monument so visitors can have a comfortable place to sit and reflect and honor those Vietnam veterans.

The unveiling will take place Sept. 10 at 10 a.m. at Zion Harley Davidson, 2345 N. Coral Canyon Blvd., Washington City. The event will be attended by state and local government officials, several veterans organizations, as well as family members, friends and supporters of veterans in the community.

“It’s a celebration of living,” Solomon said, “and it’s time.” 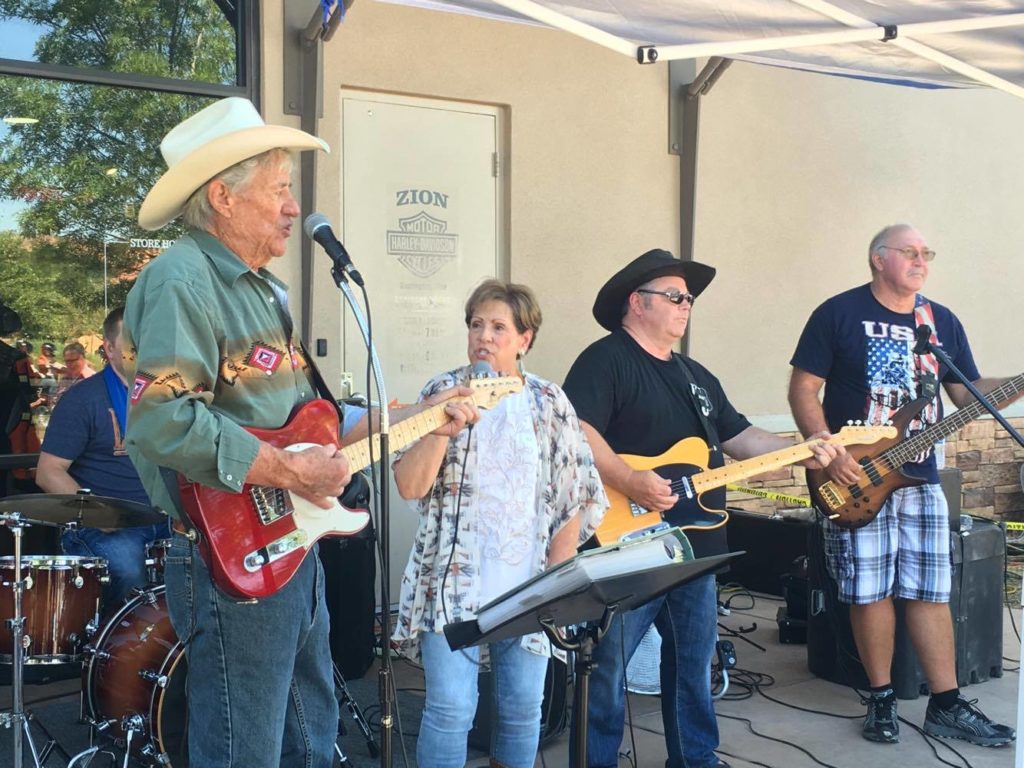 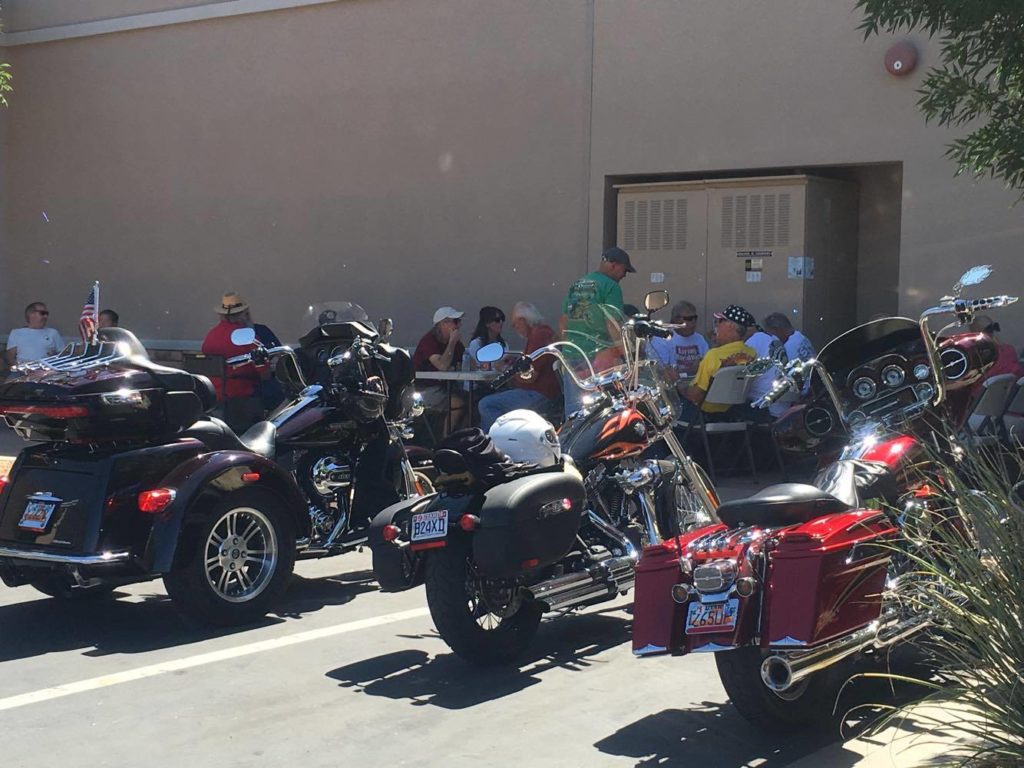 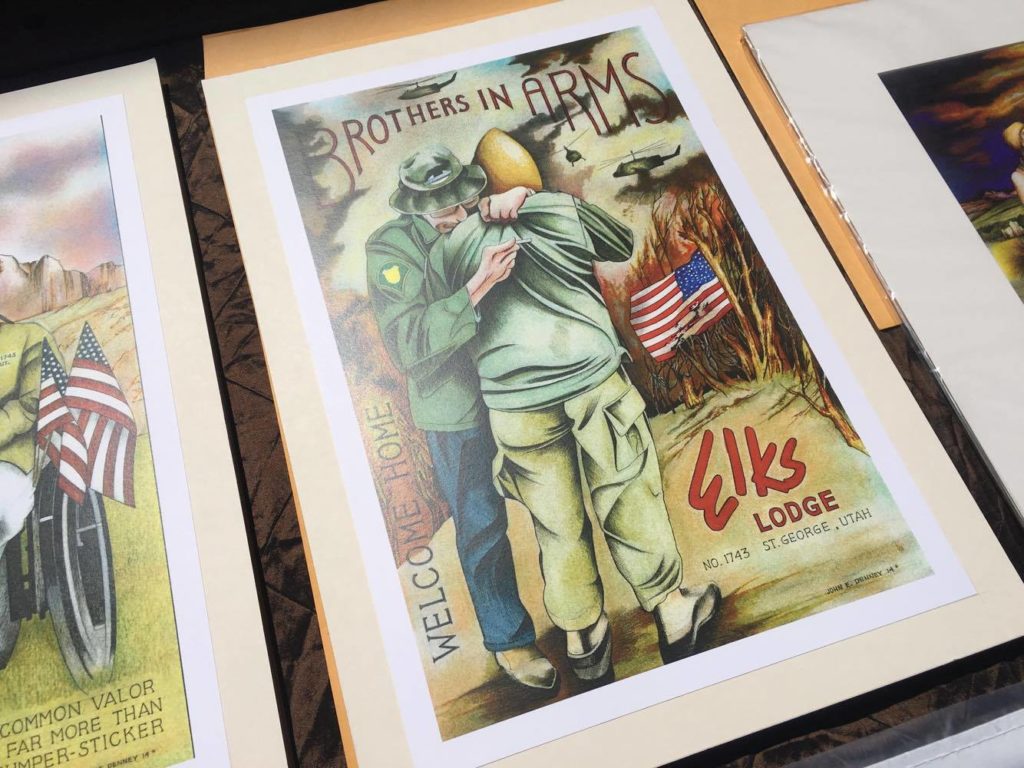 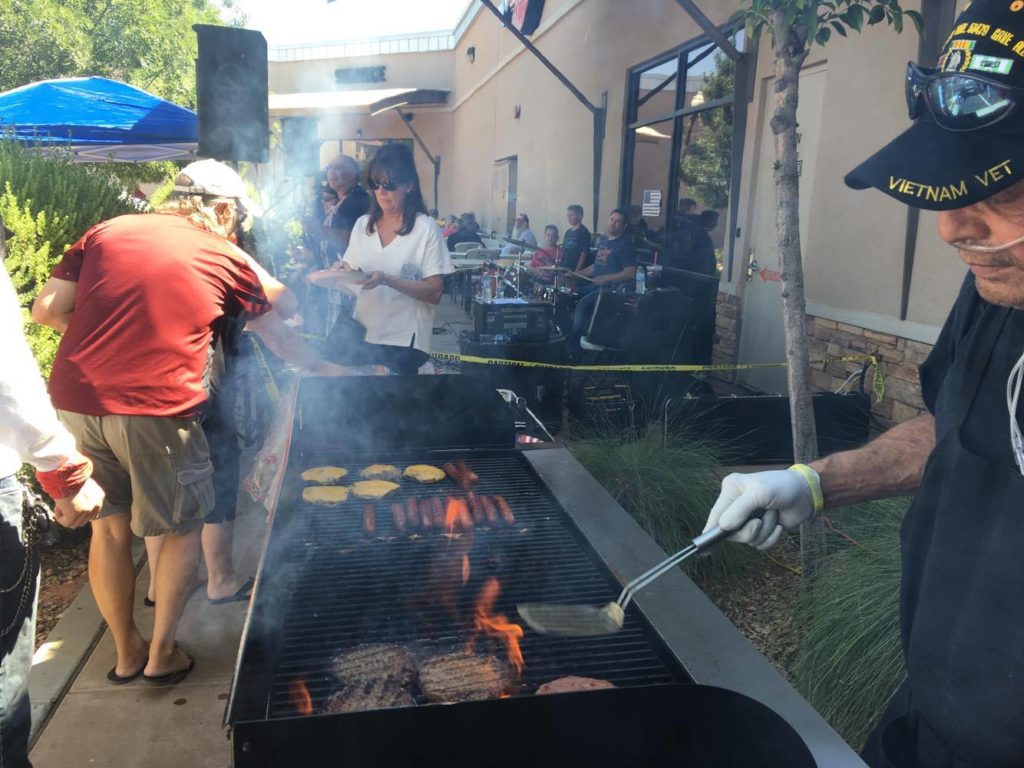 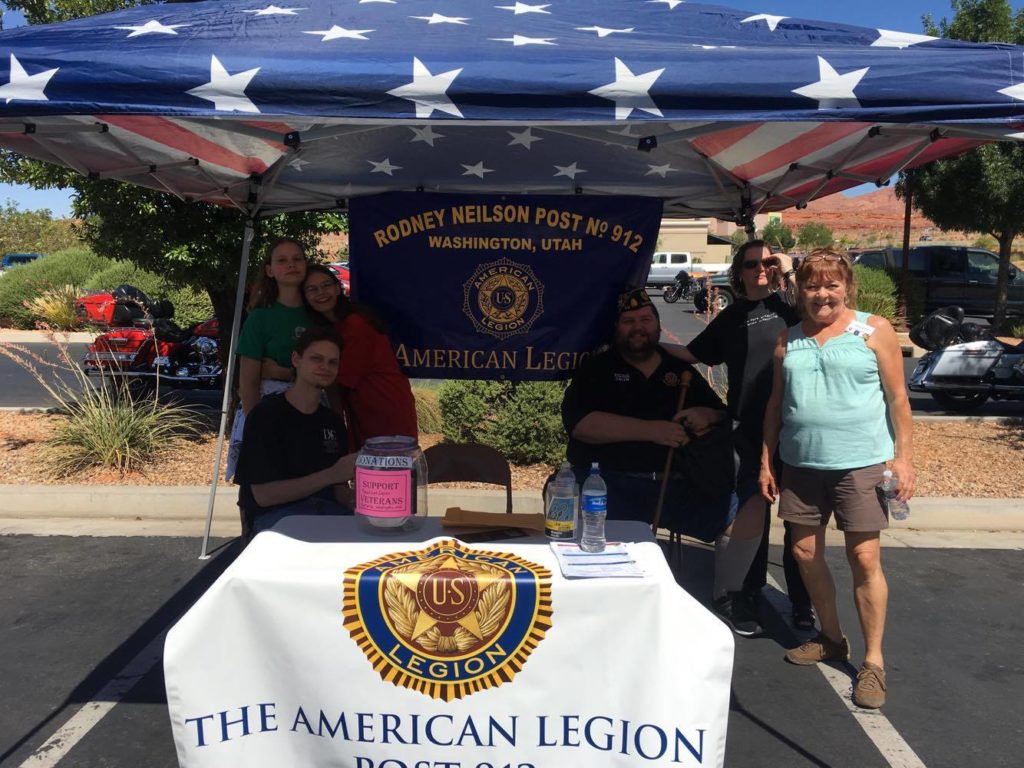 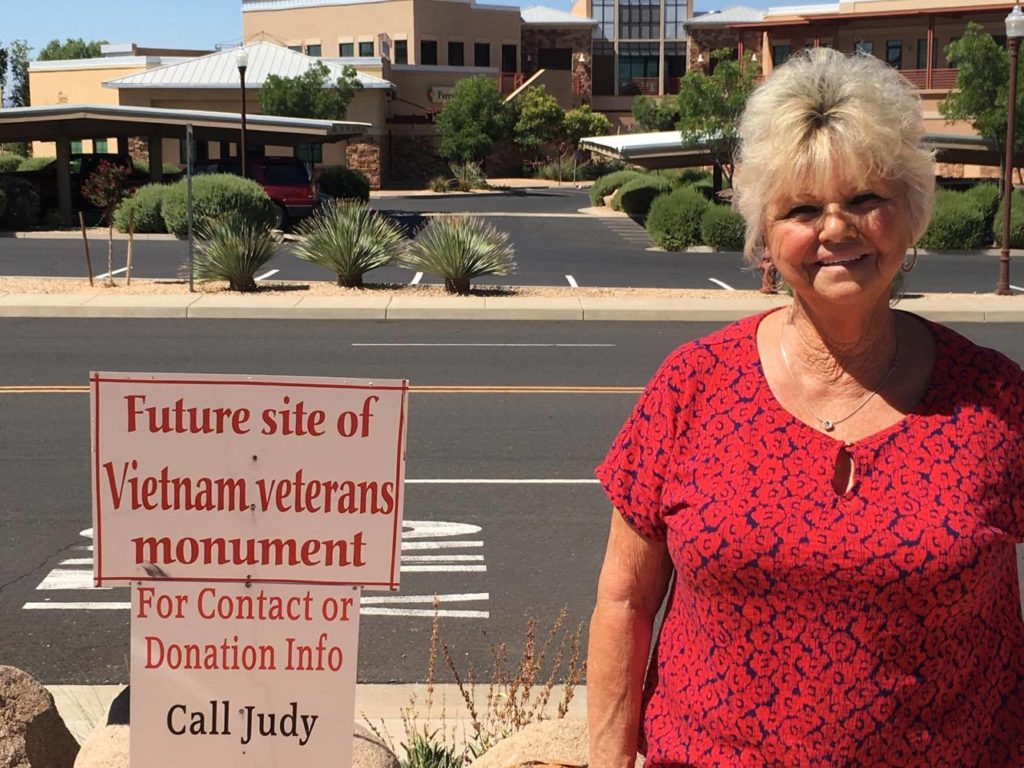 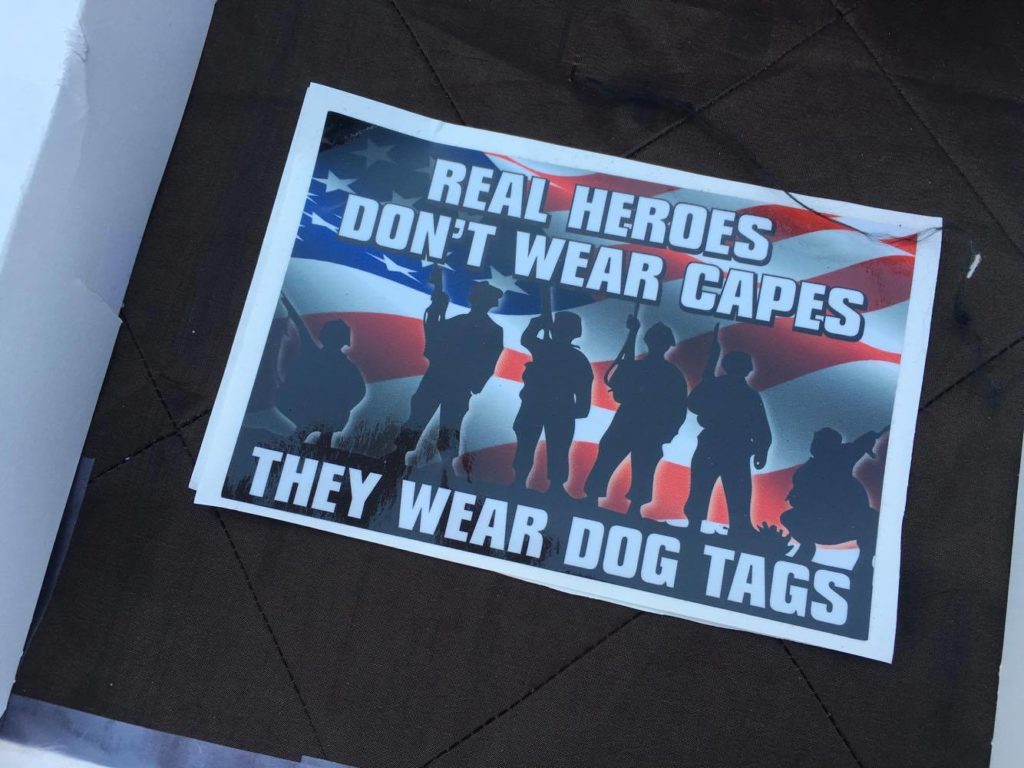